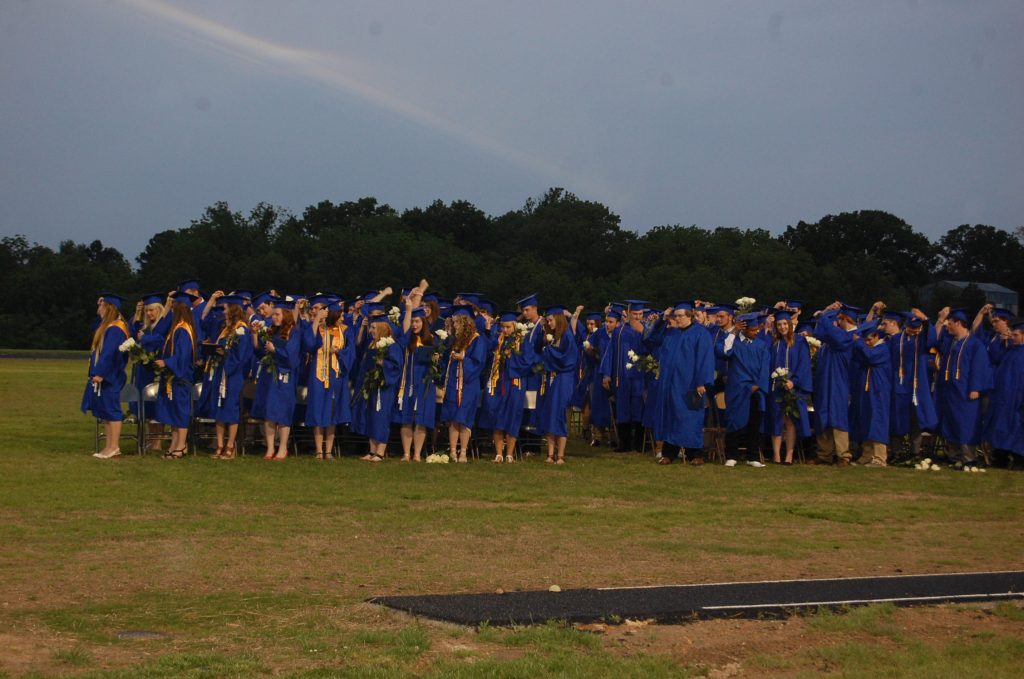 Commencement exercises for the Ava High School Class of 2014 were held last Friday evening at Dr. C.E. Harlan Stadium.
After several periods of rain during the week, and predicted rain Friday night, it seemed unlikely that the program would be held out of doors.
The decision was made to proceed outside, however, and despite sprinkles and one moderate rain shower during the program, along with a cool, north wind, the program was completed and the class of 100 received their diplomas, making their graduation from high school official.
Keynote speaker for this year’s ceremony was Larry Harley, a member of the Ava High School class of 1958 and retired CEO of Mary Kay, Inc.
Harley shared words of encouragement by relating stories from people he has known in the business world, and also reflected on words of wisdom gleaned from his ancestors right here in Douglas County.
Following Harley to the microphone were Class Salutatorian Bailey Lee and Valedictorian Elizabeth Ferguson.
A senior choir, under the direction of Michelle Wolfskill, also sang.
As the class was introduced to the board of education and the presentation of diplomas began, it became evident that the weather was not going to fully cooperate. Names of seniors were read rapidly by Principal Teresa Nash, and seniors were hustled through, with few delays and nothing more than a brief shower of moderate rainfall.
Friday was an extremely busy day for the Ava graduates, beginning with the traditional Senior Bike Ride from the square to the PAC building at 7:30 a.m.
At 10 a.m. the annual Senior Honor Awards Program was held in the PAC, and at 1 p.m. the Senior Assembly was held in the gymnasium.
Following the graduation ceremony, seniors boarded buses for the Project Graduation all night party that concluded with breakfast prepared and served by Ava Lions Club back in Ava at 6 a.m. Saturday.
This week’s Douglas County Herald contains the special Senior Edition which includes pictures of the graduating seniors as well as pictures from the Honor Awards Program on Friday.
Classes continued this week at Ava R-1 Schools for the remainder of the student body. The last day of school will be Friday, with students to be dismissed at 12:30 p.m.