Doug Berger/Herald Regina Robertson with parts and patterns for creation of snowman.

After retiring from a 27 year teaching career, Regina Robertson knew she had to find something to help occupy her time.

Robertson spent 26 years as he middle school art teacher in the Ava School District. She had spent her first year of teaching at Gainesville.

“I liked teaching middle school. That’s about the time that they find out that there is more to art than just making a valentine. They want to learn to draw and paint and learn about shading and coloring,” she stated.

“I always liked to draw and in junior high we had art and when I got into high school Dorothy Williams was the high school art teacher, and I just loved her. I had a talent, I could draw, I could paint. I can do it better now because practice helps a lot. If you were born in Ava, jobs were limited and you had to think about that also. I knew a teaching degree would allow me to stay home with my children in the summer and go to school with them when they went to school. It just worked out that I was able to get a job in Ava. When I went to college I wanted to get a teaching degree and I wanted to teach art, so I just kept plugging along until I got it done,” Robertson explained.

To help fill her retirement time, Robertson started using her artistic skills in creating crafts. One of those crafts qualified her as a Best of Missouri Hands artist. It was her painted turkey feathers which qualified her for the juried recognition as a Best of Missouri Hands artist. Her paintings on turkey feathers had her demonstrating at Silver Dollar City, where she produced her work as visitors looked on.

“I was at Silver Dollar City for maybe 10 years after I retired from teaching as a demonstrator in the woodcarvers shop. It was a wonderful experience to talk to people from all over the world,” she stated.

Robertson had also expanded her craft offerings to include what she terms “Kreations.” The “Kreations” are fabric based art including snowmen, scarecrows, pumpkins and others. She sells these “Kreations”  along with her turkey feather paintings in a number of locations including craft shows, display booths and at the Ava Art Guild gallery.

“I like to sew, and I like to decorate my home. If you go to Walmart and you try to buy a product, they have some really cute rabbits, but they are all exactly the same. If I go to the next Walmart, they are exactly the same. So somewhere along the line the Art Guild had a booth at Hootin an Hollarin (in Gainesville) for I don’t know how many years. I started to make crafts to take down there. A lot of them. When I retired from teaching I needed something to do. I was as busy as a bee when I was a teacher and I just needed to stay busy as a retired teacher, and this was a niche. There are not very many people that make handmade crafts anymore. I have people that buy my snowmen every year, or they will buy a new pumpkin. They’ll come down to the booth at Hootin an Hollarin and say I just came to buy a different pumpkin, or I came to look at your snowmen. Or a lady said have you ever made a lamb, and I said no, I never have. She said if you will make me some, I’ll buy some for my daughter’s nursery. I just made it and she bought it. Sometimes it’s just a challenge,” she said.

“This is a wonderful past-time. I sit there, it might take me four hours. I don’t know. Do I really ever count my time, no. I paint turkey feathers. I can spend 15 hours on a turkey feather, easy. Some things are faster than others. Little bunny rabbits are faster. I made a moose that’s got antlers and he is hard to make and that lamb is hard to make because it has dowel rods in its legs. It keeps my brain going, and if you have things you worry about you go and work in the craft room,” Robertson stated.

Robertson explained in her craft world along with creating the original pattern on paper she will have to figure out how to make all the the components-legs, bodies or arms. She stated it would be difficult to make them exactly the same even if she wanted to. She pointed out each of her snowmen and scarecrows have unique clothing. Robertson likes to use recycled fabrics in her creations. People will even give her fabric they think she might be able to use.

“I would probably do it for myself, make a few things, but I’m not going to make something if they don’t sell, because what are you going to do with them. My mantle at my house at Christmas has my snowmen there, and right now has three or four rabbits out that I made. If I want something, I just go pull it off the shelf,” she said.

Robertson stated she has also learned marketing is also an important part of selling her crafts and has also learned to enjoy that element. She pointed out she has to be aware of current decorating trends and preferred fabric choses. If something has stopped selling she indicated she would probably stop making it.

“I sold a whole bunch of penguins the first year I made them. I haven’t sold very many now, so I probably won’t make any more.”

“I made some pumpkins out of what I thought was a very pretty peach colored material, and I guess nobody liked it, because I had a half dozen left and I thought if they didn’t buy them last year they’re not going to buy them this year. So I painted them. They’ll sell now. I figured out the colors I think will go, if they don’t go I might rip the stem off and recover with new fabric and remake them.”

“Because I decorate my house, I pretty much know what people are going to like. Does it go with the rest of the stuff that you have,” she said.

She also pointed out that you sometimes have to be imaginative in adding new elements to her products. This year she made her first snowman on skis. She has also recently started to make snowmen families. She stated that she had some scraps of material left over and was trying to figure out what to do with them when she decided she could make small snowmen for the snowmen family displays.

She also pointed out that crafts will sell better with the proper presentation.

“If I’m going to bring a craft into the art guild, I’m going to decorate the window. I’m not going to set them there and forget them, so I bring Easter eggs, flowers, leaves,” she said.

“The turkey feathers they buy because they feel are a piece of fine art. I think they enjoy my snowmen because they make them smile,” she stated.

Robertson stated she still likes doing conventional forms of art such as painting.

She pointed out her painting of the turkey feathers is a conventional form of painting.

“It’s not most people’s conventional art. It’s a very, very realistic turkey that I painted on that turkey feather,” she said.

Robertson has also painted a number of murals for area churches.

“One of my biggest accomplishments, I guess you could call it that, is the mural at the Town & Country Bank,” she stated.

She explained at first she was hesitant about painting the mural when she was asked, but she is now proud of it.

“When you’re painting at Town & Country Bank everyone going through the bank is going to see your work,” she said.

She indicated she enjoyed a recent workshop at the art guild were they designed quilt blocks on wood.

“I spent way too much time on mine, because I really got into it,” she stated.

Robertson stated the effort she puts in on her own works allows her to appreciate the work of other artists when she looks at their work and knows how much time it took to create. 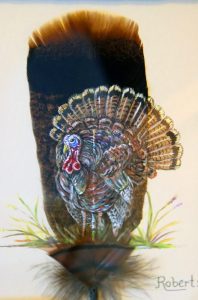 Doug Berger/Herald
One of Regina Robertson’s paintings on a turkey feather. 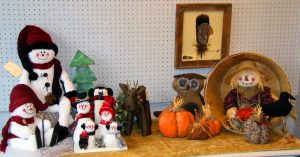 Doug Berger/Herald
Some of the “Kreations” of Regina Robertson.