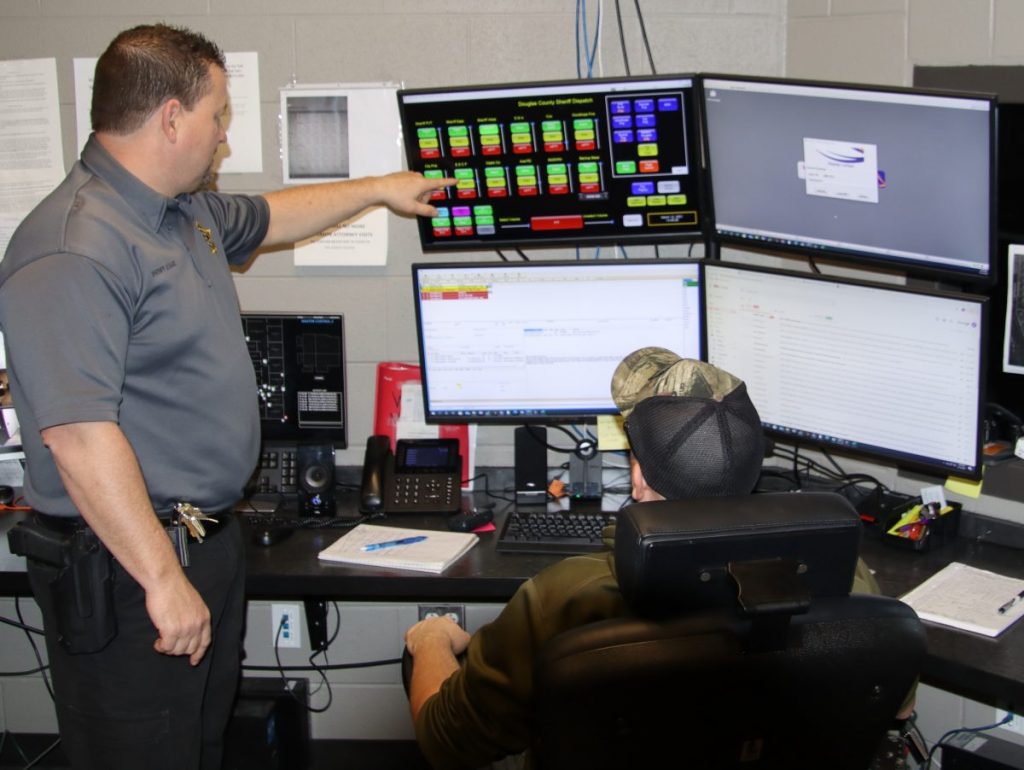 A recent grant will allow for the location of 911 callers in Douglas County to be immediately determined. The grant will also allow for text-to-911 in a four county area including Douglas County. The Missouri 911 Service Board recently informed Wri-Comm 911 that a grant award of $770, 200 from its assistance program will benefit 911 coverage in Wright, Howell, Ozark and Douglas counties.

Douglas County Sheriff Chris Degase and Douglas County Assessor Alicia Degase had been working with Wri-Comm Director Jeff Holman and Howell County 911 on the grant request from the Missouri 911 Service Board. The grant was applied for in the fall of 2020.

“With the location popping up on the screen I think things will run smoother and faster,” Sheriff Chris Degase stated.

“If you call 911 today it may go into the nearest 911 center. It may go to Wright County, it may go to Taney County, depending on where they are at. Sometimes if you dial 911 you will actually ring into the sheriff’s office, don’t ask me how that happens, but sometimes you will. But all we get is the person on the other end of the line. We don’t get a location from them. We don’t have that equipment. So they’re on the phone and we have to say Douglas County Sheriff’s office and ask is this an emergency and where are you located. So they have to provide us directions or they have to be able to provide us that physical location that’s on their tax bill. If they can give the physical location we can tie into the data base from county assessor for the location. We can also find by name of property owner,” Sheriff Degase explained.

Douglas County Assessor Alicia Degase began working on the 911 project over five years ago and began assigning physical locations to property and this is the physical location that is found on the tax bill.

“The  mapping system has been a huge tool that we’ve used over and over. Cox (ambulance service) has access to it and is able to access for ambulances,” Degase stated.

“When I took office there was nothing. All there was were rural routes, which anybody in Douglas County knows doesn’t mean we will get to where you live. You may have a rural route which takes you to a mail box in the middle of a county road with 15 other mailboxes. So in 2014 the assessor, Alicia Degase, worked with her mapping company, worked with Cox and she developed a physical location through her GIS. So essentially what happened was that properties began being assigned a physical location. She shared the mapping system with us and shared the mapping system with Cox. That physical location is on your tax statement and it’s laid out to meet 911 requirements. She only assigned physical locations on properties that had buildings on them. If you have 40 acres out there without a building, it wouldn’t have a physical location on it,” Sheriff Degase said.

Degase added that the locations for some private drives will need to be addressed to be 911 compliant. He indicated a grant will be applied for in April to help address this problem.

Along with the immediate location of the 911 caller, the text-to-911 will also be important in the county, Degase stated.

“When that call comes in it’s going to pop up a GPS location and we find out where that person is, that’s huge, and in the same way the text-to-911, when text comes in it shows me a location,” he stated.

Holman explained the text-to-911 can be beneficially in numerous situations. He pointed out it could be used by someone with a medical condition which did not allow them to talk, a domestic situation where a person did not want to talk, or a law enforcement situation such as a home break-in in progress where the caller also did not want to talk. Degase stated he could see a number of other situations when the text-to-911 could prove beneficial.

Degase does not anticipate needing any additional dispatching staff when the new equipment is installed. Currently there is at least one dispatcher and jailer available for dispatching at all times. The jail staff is cross trained at dispatching.

“I really don’t foresee an increased call volume, particularly if the city of Ava keeps their dispatch,” Degase said.

The sheriff’s department currently dispatches for all fire departments in the county other than the city of Ava.

“We don’t dispatch anything for the city of Ava right now. They have their own dispatchers,” Degase stated.

“With the new system, since sheriff’s department is 911 call recipient, we will have to talk with city representatives about how best to dispatch city police and fire, whether it will stay with city or be dispatched from 911 call center in sheriff’s office,” he said.

“We will work with the mayor, and we’ll work with Chief Overcast, who I think will be taking over in June. We’ll work with them to find out how they want to do it, if we get the 911 call here. How and at what point they want us to transfer the call to the city of Ava. Our plan is to work closely with the city to figure out what is best for everybody. I assume it will be similar with Ava Fire Department,” Degase added.

Degase pointed out that Ava Mayor Burrely Loftin has already sat in on some of the meetings, and Degase feels there will be a good working relationship on implementing the 911 system.

The cost of the dispatcher training is part of the grant received.

The sheriff also anticipates medical calls would continue to be transferred to Cox. He said he doesn’t anticipate sheriff’s department dispatchers doing much medical communication with callers even though they will have been trained.

Degase explained if a medical call comes in to the sheriff’s office it is transferred to Cox after the sheriff’s department gets initial information and figures out where they are before transfering to Cox.

“You can only imagine somebody in Douglas County trying to explain to somebody in Springfield where they are. We get the information before we transfer to Cox, because we’re still responsible for toning out first responders and everything to assist Cox,” Degase said.

Degase pointed out that along with covering equipment cost, the grant would cover the monthly fiber costs for five years, and that he had to have fiber in the sheriff’s office anyway.

The sheriff indicated that in discussions with Jeff Holman it was thought that significant progress on the installation of the system could be made by summer. Degase indicated that they have to have equipment compatible with the 911 call center in Wright County.

The sheriff feels the new information available to the sheriff’s office will be of major benefit.

“I was raised here. People can tell me-Y second slab, and areas in Douglas County and I know them. I know how to get there. I think one of the biggest problems is bringing in somebody new as a deputy or dispatcher who doesn’t know the county. It’s tough to do that because when people call into the office they still refer to things as the old Heriford place or old Johnson place, and my office staff and new people don’t know those areas. They call me and ask where is the old Heriford place and I can tell them. So I think that’s been one of the biggest obstacles. It’s frustrating when you get that 911 call and you get half the information and then they lose service or you lose the call, and here you are trying to piece together where they’re at. The new system is going to automatically pop up their GPS location,” Degase said.

Degase said he thought there were 16 counties in Missouri without a formal 911 service.

“These are the services that save lives,” said Mike Phillips ENP, president of the Missouri 911 Directors Association. “It’s been 20 years since we’ve seen any of these 16 Missouri counties move up in their service levels.”