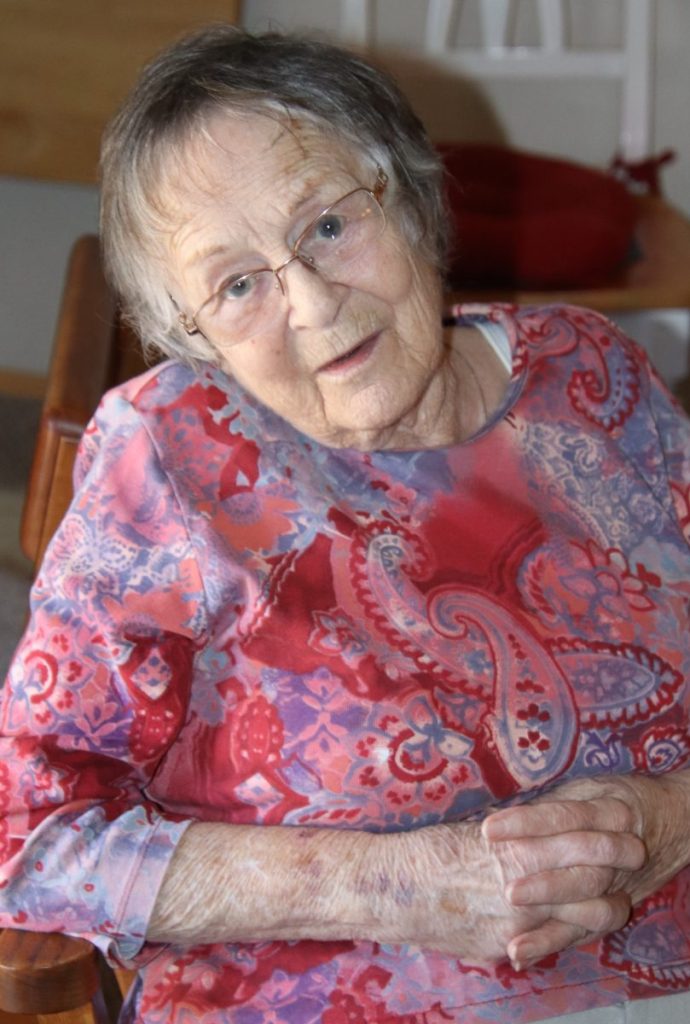 Ava area artist Rita Fancher remembers the first painting she ever made.

“It was very Ozarkian. It was a little cabin. That’s in England now. My nephew has that,” she stated.

“I grew up just outside of London, about 20 minutes on a tube train, and you could be at the National Gallery and Museum, and quite often I’d go to the national gallery. A teacher would take us to the gallery. So I had that encouragement,” Fancher explained.

Even with her early contact with art, Fancher did not develop a serious interest in painting until the mid 1980s.  It was contact with former Norwood educator, Joyce Cramer, that Fancher pursued her painting.

“I came from a family of artists,” she stated.

“My main interest at the time was cake decorating, and that was my creative outlet. I still fiddled around with pencil and happened to meet Joyce and she really took me under her wing and was my mentor, taught me the drawing. Then I was trying to find a drawing teacher, somewhere nearer than Springfield, but happened instead to find an oil painting class up in Hartville,” she said.

The jump to painting was not all that difficult, she stated.

“I taught a lot of beginners, and they’re amazed to find they can do it,” Fancher stated.

“My dad was a blacksmith, and he used to do ornamental iron work. He also liked to draw and paint and he tried to encourage me, but you don’t listen to your parents. Dad’s ornamental work was kind of a hobby to begin with, and at that time the blacksmith was the village blacksmith. Now, I think dad would have been in his element, because now there is so much ornamental ironwork around,” she said.

Fancher’s father would draw designs on the shop floor in chalk and that would become his template. Consequently, whatever this customer had was unique, because the design would be worn off the floor, she explained.

“I took some painting lessons at Hartville, and then I got brave and decided to enter a painting in one of the Art Guild shows, and at that time the art guild numbers had decreased a little so there weren’t a lot of entries in the show, but the judge liked it, and that was a lasting encouragement. Most of the encouragement came from the Ava Art Guild, and at that time I lived just south of Norwood and someone asked me if I could teach her how to paint. It hadn’t really occurred to me to do that before. I then got one or two more inquiries,” she stated.

Fancher has since instructed individuals and at classes offered through the Ava Art Guild. She indicated she was actually a little surprised that she could teach.

She feels beginners can learn to paint.

“Usually they say I can’t even draw a straight line and I say good that’s a good start,” Fancher said.

“Art can be taught up to a point, that’s were techniques come in, but also there has to be something in the personality of the student,” she indicated.

Fancher stated she felt that if her students couldn’t do a project without her there, she hadn’t done her job.

“They idea is I want them to learn how to do this and then go off and paint their own pictures,” she said.

“I did enjoy giving art classes. Not being a trained teacher, I was always a little hesitant about offering too much criticism, but I made some wonderful friendships,” she stated.

Fancher feels that some of her previous contact with art early in her life must have had some effect.

“I met George, who was stationed in England with the Air Force, and we got married. We left home and we didn’t see much of my family for quite a few years, just occasional visits. When we were in Japan, I took lessons in cake decorating and found that very fulfilling, and I suppose it was the artist coming out. One thing was we had to do a cake that involved a flesh tint. So somehow I knew yellow had to go in there. So I was the only one in class with a real flesh tint. I don’t know how I knew that. So I suppose that part of a painting instinct was there,” she explained.

She pursued this interest in cake decorating for approximately 20 years before starting painting.

“I have painted some animals, but I love landscape painting,” she said.

A large landscape, primarily based on Rocky Mountain images, hangs in her living room.

An artist that has always stood out to her was the English painter, John Constable.

“He did wonderful paintings of the English countryside, landscapes with buildings. I learned later that he actually was considered an Expressionist, but he didn’t strike me that way,” she said.

She considers herself a realist painter. She has painted on everything from spoons, to big canvases, to murals on the side of buildings.

“I painted murals. The one on the side of the art guild building, I did that in about 2015, and with friends helping me, we did the large mural on the corner of the square in Mansfield, that shows the Wilder home.”

One of the more unconventional painting surfaces she works on is rocks.

“I’ve always loved stone. In England we have these stone walls. I loved things like that, and now I’m wondering if that is kind of a hereditary thing because my great grandfather was a stone mason. When we moved to Norwood we built stone walls and I liked taking flat stones to make paving. I thought there must be something else I can do with rock. At that time I was working in oils, which didn’t work very satisfactorily on rock. It just slid all over the place, so I got acrylics and went from there,” she stated.

Fancher stated she has also been interested in other art forms.

“I had always been interested in watercolor, but found it rather challenging. At the art guild, they had a workshop that Jane Osborn taught. She showed us a way that I felt I could do watercolor and it wasn’t intimidating,” she said.

“I tried working with polymer clay. I found that interesting. I do like to knit, and crochet. I used to do a lot of sewing,” she said.

Fancher has sold her art works, but she sells the work as a hobby.

“I’ve never charged very much, and I think I’ve given away as much as I have sold,” she said.

She does not believe she will ever quite get to be a fully proficient oil painter, but there is an element that draws her to art.

“The expression is getting into the zone. Once I get really interested in a project time goes by quickly. I don’t realize I’m hungry, cold or hot. You become unaware of your surroundings,” she stated. 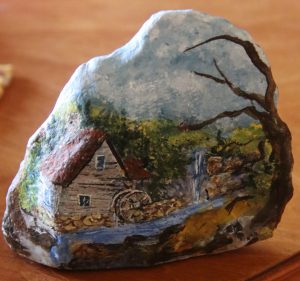 Doug Berger/Herald
Rita Fancher painted this scene using a rock as a canvas. 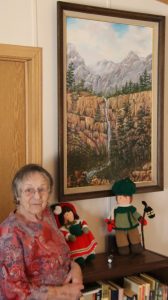 Doug Berger/Herald
Rita Fancher stands beside a painting inspired by the Rocky Mountains which hangs in her home.