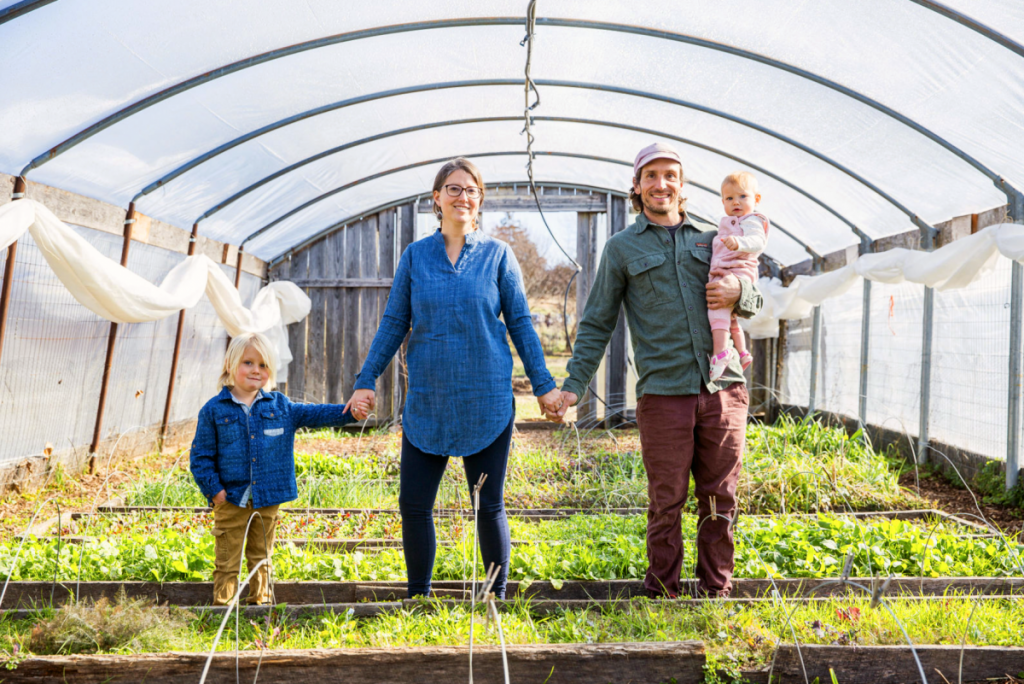 A long time Ava business, Jean’s Healthway, recently changed ownership after over 40 years of operation under the ownership of Jean Farbin. 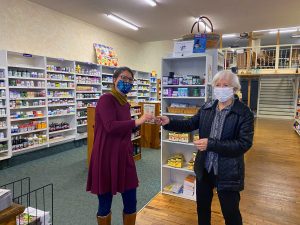 Submitted Photo
Rachel Barry receives the keys to Jean’s Healthway from original owner of the business, Jean Farbin. Rachel and Jeff Barry took over ownership of the Ava store on December 30.

Farbin had started the store with no previous experience operating a health food store.

“I started out in the basement of my house, and the response was so good I moved into a building down town. I saw a need because of people’s poor diets, and to me, too many people were getting ill,” Farbin stated.

Farbin stated there was a big element of self-education for her during the entire time she operated the business.

Farbin’s daughter, Susie Farbin-Kawamoto, who is an owner of MaMa Jean’s Natural Market in Springfield, pointed out her mother was a hairdresser by trade, but was always educating herself on healthy living.

“Mom was always reading about health, never a novel. She spent her life educating herself,” Farbin-Kawamoto stated.

Farbin stated she never was concerned about starting this type of business in a small community. She explained she had started small and initially promoted the sale of books, stating she was really into educating.

“It pretty much took off pretty quick. It probably took longer than I remember,” Farbin stated.

The business was initially promoted by a combination of methods, but one of the methods was Farbin sponsoring 10K runs.

“I sponsored 10K runs and I ran in them. That seemed to give it a little boost. It got attention. What is this crazy old woman doing running around. I wasn’t old then, I guess old is something that happened more recently,” she said.

“One time, years before, my parents had come to visit and they were in a car and they passed me on the highway and my dad said to my mother, will you look at that fool out there. He did not know that it was his daughter,” Farbin laughed.

She thinks she sponsored the runs for five or six years. Farbin pointed out she ran for her own health, along with the promotion of the health food store. She continued to run off and on for many years, she said.

“The people were the most enjoyable part of operating the store, and seeing them make progress with their health,” Farbin stated.

Rachel Barry is almost a lifelong resident of Douglas County. Her parents moved to an area near Skyline in 1986 from Wyoming when she was one and one half years old.

“We had an acre garden and hardly ever came to town, but when we did come to town we always stopped at Jean’s. We weren’t allowed to have sugar and so the frozen yogurt treat was a really big deal. To have ice cream, which was not ice cream, was kind of a big deal for us, and that was one of the biggest memories of Jean’s older store,” Rachel Barry stated.

They still have the yogurt machine and it still works, Barry related.

Barry had an early introduction to healthy foods.

Rachel’s husband, Jeff, is from the Lake of the Ozarks area.

“We met in college, at the College of the Ozarks, and we were involved in outdoor groups together, Outdoor Wilderness Club. So we were into nature and hiking. It kind of goes hand in hand, nature and hiking and healthy eating,” she stated.

Jeff now spends his time on their farm.

“He was expending a ton of energy, running marathons and biking and adventure racing. He couldn’t find how to expend his energy until we found farming,” Barry said.

Rachel has a degree in dietetics and Jeff in criminal justice.

She started out after college working as a nutritionist.

“Even though it was nutrition, it wasn’t my type of nutrition and I started here and the first week I went, oh my gosh, I went to school for four years and this is really where I needed to be. And I could see the potential. Jean has built an incredible, incredible community and store. So I felt right away, I would like to do this,” she said.

The store had a community element from early in its existence. Farbin-Kawamoto stated the store became kind of a community center for the people. They would visit while shopping at the store.

“Mom wanted everyone to have good health,” Farbin-Kawamoto said.

The store always had customer loyalty and appreciation, she added.

Farbin-Kawamoto stated she always thought it was sort of funny if she saw a person in her Springfield store that she recognized from the Ava store. They almost always seemed apologetic for shopping at her store in Springfield instead of her mother’s Ava store, she said.

Farbin-Kawamoto indicated having been around her mother’s store was one of the reasons she opened the store in Springfield 18 years ago. She had worked with her mother for 14 years in the store. There are now three MaMa Jean’s locations in Springfield. Farbin stated she was proud of her daughter for developing her own stores.

“I’m excited the Barrys wanted to continue the legacy and keep the business. They are an awesome young couple,” Farbin-Kawamoto stated.

Barry had worked at the store between 2009 and 2016, prior to having her first child. In 2019 she was contacted about the potential to purchase the store. With Covid and Barry having a second child it took until the end of 2020 to finish the sale process, she stated.

“I never anticipated being a business owner, not at all, it’s been good growth. At this point in my life I think I’m able to sit back and listen to people and try to not speak before I’m listening to what they’re asking, whether it’s an employee, customer or anybody,” Barry related. 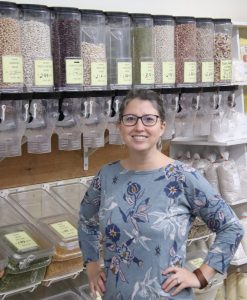 Barry explained that about 13 years ago, she and Jeff became very conscious of health and what they were eating.

“So on a whim, we started putting stuff in the ground out on this small piece of property that we now live on,” Barry explained.

“They were really open to letting us try what we wanted. So we put in a high tunnel from a grant from the USDA. Jeff developed a solar gravity feeding system to water it,” she added.

“Since then we have three high tunnels. We built our own house on this property. We built a house on a piece of property we rented. They since have moved and we purchased the land. There was a whole lot of faith that went into this and it continues. It took a lot of faith to just jump into what we believe in,” she stated.

They will be starting to grow things on the farm to sell at the store. At some point they also hope to be selling meat products from their farm in the store.

“It’s funny, people think of health food as non-meat eaters, and we’re really proud to say we know the full circle to include animals in agriculture,” she stated.

Meat items are currently sold in the store, but none from their own farm.

“Most things sold through the store are things that support health, whether it’s something to help you cook, the ingredients to cook, supplements to help you get over something or to maintain health, they are all health supporting,” Barry said.

Groceries and supplements are about 50-50 in sales at the store, Barry indicated.

Barry stated that the bulk section is really well received.

“If you’re making a new recipe and you don’t want to buy something that you may not ever use again, you’re able to buy a tablespoon and it doesn’t cost you, but maybe 25 cents,” she said.

The store’s customers cover a broad demographic spectrum, and Barry stated that was exciting to her to not be just one demographic group.

Barry explained they hope to add other elements to the store. They will be expanding the organic grocery. A deli will be added at the site. Barry indicated her brother-in-law and sister-in-law will be operating the deli. They are renting space from Jean’s Healthway and will operate the deli as its own entity.

“We have a vision of this kind of being a wellness center, possibly in the upstairs space, which has been under-utilized for 20 years. It could potentially house a nurse practitioner or a natural dentist. People that are into a healthy lifestyle are really specific with their practitioners they want to see, so we hope to form that community of practitioners. We have just started that conversation,” Barry stated.

The space upstairs is a large open gallery like area, and once Covid is no longer such a threat, Barry stated she could see the area used for a number of purposes, from community space to music and dance lessons.

“I know Rachel well, and she is excellent in having the knowledge. I’m very proud to step back and say, you go girl. That’s wonderful. She’s a delightful human being,” Farbin stated.