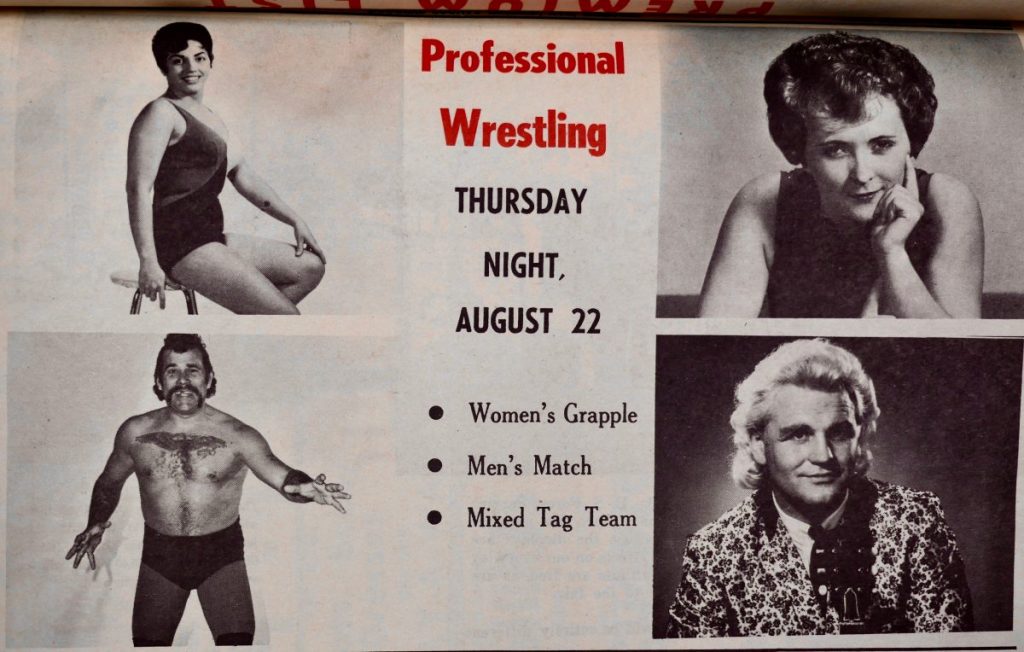 Or, at least, that’s the first time it’s mentioned in the Herald. 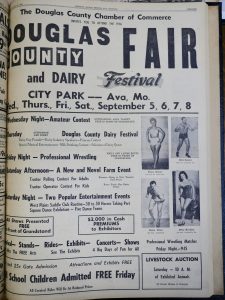 “Perhaps the most interesting wrestling match ever held in our little city will be pulled off at the Wilson Opera house. Saturday night January 13th. The match will be between two of our home boys, Heiner Mays and Arthur Baker. Both of these boys have been in the professional wrestling game for some time, and the match will no doubt be very interesting. They promise to give a square deal and a fair, square, wrestle to a finish.”

It hints at other wrestling matches, but as far as the Herald is concerned, professional wrestling doesn’t enter the picture again until the 1950’s.

Several times during the 1950s, 1960s, and 1970s both the Douglas County Fair and the American Legion hall featured professional wrestlers. The names and promotional photos were listed alongside events including tractor pulls and gospel music groups.

The wrestlers were always in pairs – two women and two men. The women would face off. The men would wrestle each other. Then there would be a mixed team event involving all four wrestlers.

According to Wikipedia, the 1950’s were the “television years” of professional wrestling, with matches beginning to be televised to the newly-popular black and white televisions in American homes.

From 1948 to 1955 each of the three major television networks had professional wrestling shows.

Critics also claim this is the era that “gimmick characters” became popular, changing the nature of the sport from being athletic-based to performance-based.

While the vast majority of the wrestlers that came to Ava were circuit performers from out of town, a 1954 Herald article mentions a “former Douglas County man, Neil Warren, now of St. Joseph” wrestling against “Jack Barnard of Dallas, Texas in a two-out-of-three fall feature.”  Online resources show Warren had 74 matches in his career, but little other data is recorded.

Professional wrestling saw an overall decline until the 1980’s when Hulk Hogan became the face of the World Wrestling Federation. His role in reviving the industry was known as “Hulkmania.”