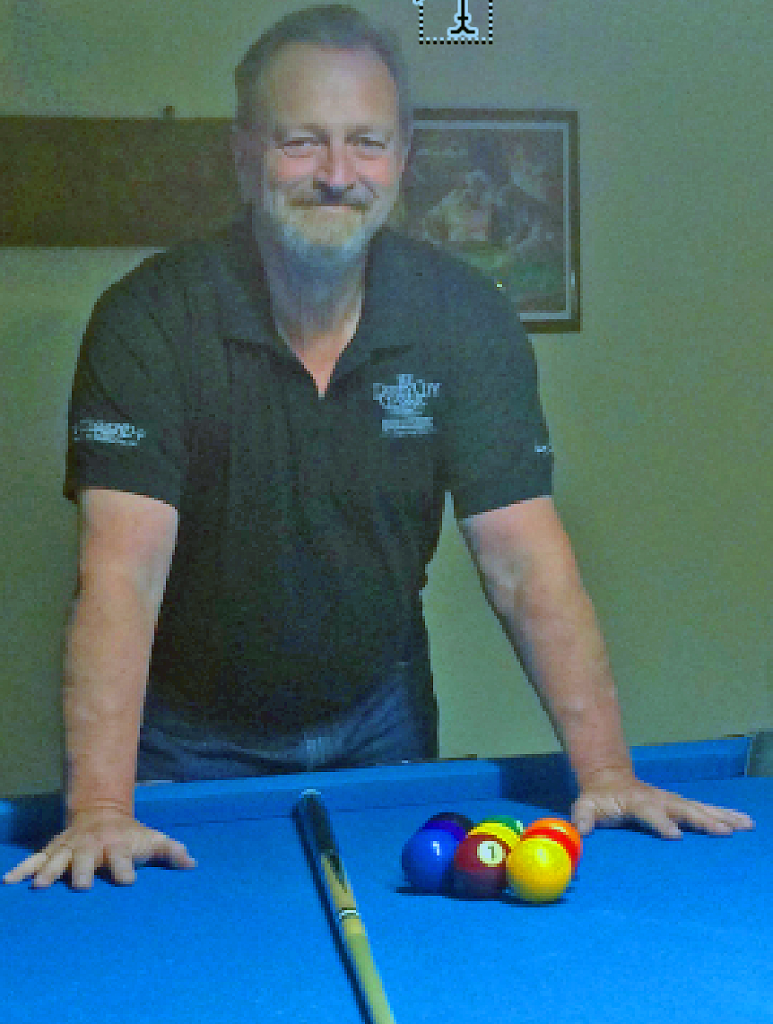 He developed his love of pool at an early age while helping out his dad, Dorn Everett, manage Ava’s local pool hall in the 1970’s. He won his first tournament at the Sugar Shack in Ava at 16. 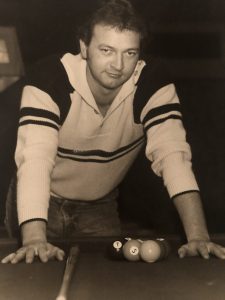 “Dad was a pool player and he showed me a little bit,” Everett stated.

“I was pretty much self-taught. I picked it up and got to playing pretty good and I got to going places every chance I got, was around some good players and picked up this and that. I did have some help, but most was trial and error,” he added.

Everett went to Kansas City when he was 18 to play in a tournament.

“I went up there and it seems like I won about $500 and thought I had hit the jackpot.”

“The Missouri State 9-Ball Championship is labeled as an amateur event, but in pool there is no fine line between professional and amateur. It’s really just an opinion,” Everett said.

Everett stated that he has a hard time answering if he is a professional or amateur.

“Since no defining point, sometimes I don’t know how to answer that…As far as what I’ve done, I’ve competed against the best in the world with some success. I didn’t lose every time, so I’ve played with guys from all over the world and lost some and won some, so I don’t know how you really make that call,” he said.

“Since I’ve always been a working pool player, not all pool players work, they just move about and a lot of them don’t have families. It’s hard to compete at the very top level and work and have a family. I tried to do it and work and have a family. It makes it a little more difficult. I’ve played all over, but primarily Tulsa, Kansas City, St. Louis, Memphis and Little Rock. I’ve played on the east coast four times and made a run out to California,” he stated.

Everett has played in matches from Sacramento to Philadelphia and Milwaukee to New Orleans. Along the way he has faced top competitors from around the world.

Along with February’s win of the Missouri State 9-Ball Championship, he had won it on three other occasions at the ages of 25, 44 and 50. When he won the first time in 1984, at the age of 25, he was at the time the youngest to ever win the title. When the tournament was started in 1982, a rule was put in place that once a player had won the tournament they were ineligible for a number of years. After Everett’s first win he was ineligible for 16 years. The rule no longer exists and Everett has played in 23 of 39 tournaments. Along with the first place finishes, he also placed second, third, fourth, fifth and sixth in the event.

“When that gentlemen started having tournaments (which later included the Missouri State 9-Ball Championship) in the 70’s, a great player called St. Louie Louie, Louie Roberts was his name, won every one of them, so he wanted to restrict it, so somebody couldn’t dominate it,” Everett explained.

Everett stated he doesn’t really have a favorite, but that 8-ball might be a little better game.

In 2001 Everett won the Billiards Expo in Philadelphia, a 9-Ball tournament with 800 entries. He considers this among his most memorable wins.

“I had some health issues at an early age, and had a lot of hospital bills. I had a massive heart attack at a young age, so I needed some money. I went to a tournament in Philadelphia. It was memorable since I needed the money pretty bad. There were 800 players in it. And that’s quite a feat for a Douglas County boy to win that thing, against all those guys,” he stated.

A month later Everett went to a Las Vegas tournament with 750 players and he ended up facing the same player for first place.

“I don’t know what the odds of that happening, but he beat me that time,” he stated.

Everett remembers another tournament he was playing in September, 2001.

“I went to the U.S. Open in 2001, and it was in September. On September 10 I played a guy from Europe, and he barely beat me and I went into the losers bracket and started winning. The next day was September 11, when the towers came down, and I was on the east coast when that happened,” he said.

He would go on to work his way up defeating one of the best players from the Philippines.

“I got cash at the U.S. Open. It wasn’t all that much money, but it was a feat for a Douglas County boy to compete against those guys with some success,” he stated.

Everett stated he continues to play in tournaments.

“I played better than I realized. I had no experience. I had fear some times when I shouldn’t have had any. I had kind of a small town mentality. I’m from Ava, now I’m here in Kansas City. For some reason, I looked at it like these guys have got to be a lot better than me, but they weren’t. It was something I just kind of had a knack for,” Everett stated remembering some of his first tournaments.

Everett feels the popularity of pool has held its own.

He pointed out that if you look at the history of pool initially only the wealthy could play pool.

“Nobody had any pool tables in their homes, and then you had to go to the pool room to play pool. That’s not really the case anymore. There’s so many people who have them in their homes. It doesn’t have the mystery about it that it had at one time,” he said.

The beauty of pool is that the medium player can enjoy it as much as the excellent player, Everett stated.

“There are so many aspects of the game when you first start playing that you may not realize…different shots you didn’t realize were possible. I played for 30 years and found out something that I didn’t know. It’s a great game you can play from six to 96,” he added.

Even though pool has been a big part of his life, none of his four children play pool.

“I had three boys and a girl and none of them play. They had access to a nice table. I didn’t force it on them and they didn’t have the fire, so that’s just the way it goes,” he said.

Everett was not the only pool player from Ava who had success in the sport.

“Fast” Eddie Parker, a 1949 graduate of Ava High School, was an internationally known pool player. The Douglas County Herald reported in the February 8, 2001 edition that Parker had died while attending a pool tournament on Padre Island, off Brownsville, Texas. He had been in Ava the May prior to his death, the paper indicated. Parker was reported to have conducted pool demonstrations around the country. In the June 21, 2012, issue of the Herald, Parker was reported to have set a record in 1980 of pocketing 22 balls in one legal stroke. In the May 4, 2000 issue of the Douglas County Herald, it was reported that the pocket billiards champion had demonstrated his shots in an event held at the Ava High School. Parker was reported to have started playing pool at the age of nine. The Herald indicated that after a tour of duty in the Navy, he continued to play pool for money throughout the country. The Herald went on to report in the article that Parker had met with the writer of the novel “The Hustler” when the author was working in a pool hall in Kentucky to help pay his way through school.  The Herald reported that the later movie “The Hustler” was loosely based on the events from Parker and Minnesota Fats lives. 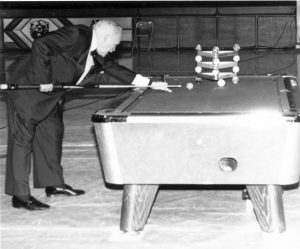 “I knew Eddie. He put on a good show. He’s a good showman. Did some trick shots and things. He was actually at a tournament, I think the first tournament, I ever played outside of Missouri. It was in Tulsa and Fast Eddie was there. He wasn’t playing, but he was there,” Everett stated. 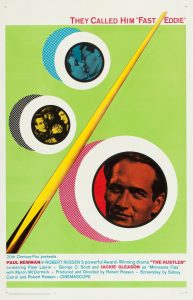 A movie poster from “The Hustler” starring Paul Newman allegedly loosely based on events from Parker’s life.

Everett stated that when the Parkers came back to the Springfield area, Parker put on a couple of shows in the area and he went to one of the shows. Everett also remembers that Parker put on a show at an alumni event at the Ava High School gym.