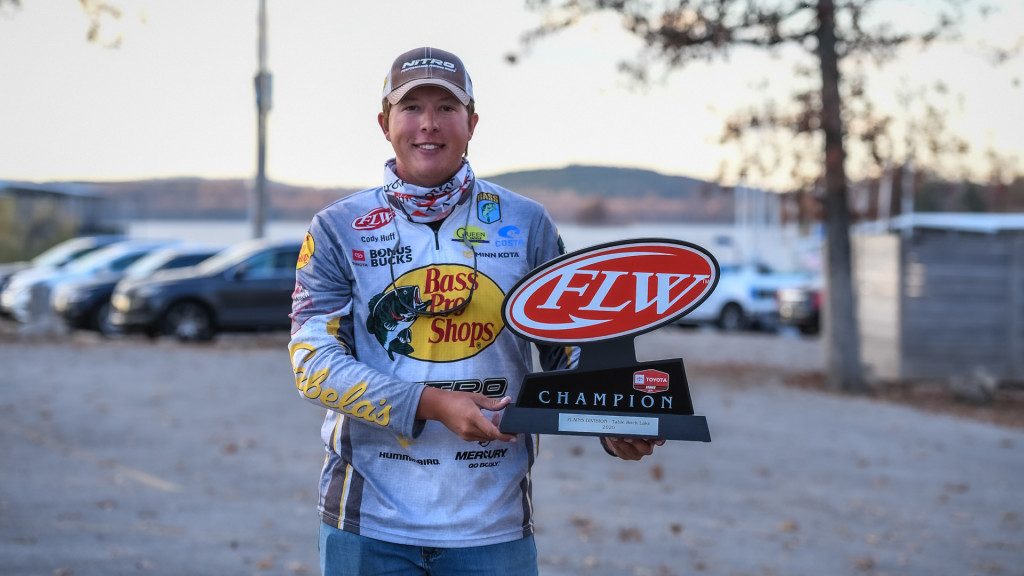 BRANSON, Mo. (Nov. 8, 2020) – Toyota Series angler Cody Huff of Ava, Missouri, who also competes on the Abu Garcia College Fishing circuit for Bethel University, brought a five-bass limit to the scale Saturday weighing 15 pounds, 6 ounces to win the three-day Toyota Series at Table Rock Lake tournament in Branson, Missouri. Huff’s three-day total of 15 bass weighing 46-4 earned him the win by a 3-pound, 2-ounce margin over second-place angler Jason Lieblong of Conway, Arkansas, and earned Huff the top payout of $32,552 in the third and final regular-season tournament of the 2020 Toyota Series

“This tournament was one I didn’t know I was going to win,” Huff said. “Honestly, I thought about not fishing – I knew I wasn’t going to get much practice, but it’s on my home pond and I kinda hated to not be out there.”

After just a few short hours of practice earlier this week, Huff said he stumbled on his winning pattern and knew it would be something the majority of anglers wouldn’t do – hunt down suspended fish in the middle of creeks.

Targeting suspended fish relating to schools of bait is something Huff is more than familiar with – especially on Table Rock. It’s how he won on Toledo Bend earlier this year, so when he realized the fish were positioned in places he normally targets in the winter, he said he knew it was game on.

“Most of the fish I caught this week were in creeks and if you could find one that had a really deep, defined ditch it was perfect,” Huff explained. “We got that big rain last week and I think that water coming in made those shad move to the backs of the creeks. As the water quit running in, it seemed like the shad were making their way back out to the main lake.

“I’m really glad this tournament wasn’t a couple more days because I caught them off all new stuff. I scrapped everything I had around 10 or 11 on Saturday and just had to go fishing.”

Huff said his primary pattern was dropping a chrome blue No. 9 Rapala Jigging Rap on a 6-foot, 8-inch medium-heavy Johnny Morris Signature Series rod with 12-pound fluorocarbon line down to fish he saw on his electronics.

“That was the key to getting bigger bites on the first two days, especially for bigger largemouths sitting in 40 to 70 feet of water over anywhere from 50 to 100 feet from Indian Point down to the dam,” Huff continued. “Once I’d drop on a group of bass, it didn’t take long for them to eat if they were going to. A hop or two at most was all it took to trigger them, and oftentimes they’d pounce on it as soon as it got to them.”

On the final day, Huff weighed all smallmouths and said he had to completely switch away from the Jigging Rap, but still focused on suspended fish.

“The fish weren’t where they were supposed to be Saturday and instead of looking for new fish I wanted to figure out where they went,” said the Bethel University angler. “I never found the largemouth, but when I got farther out I found some smallmouth suspended only 10 feet under the surface over 100 feet. I made long casts to them with a little swimbait and they ate that thing. It was a lot of fun once I figured it out.”

Huff said he is now looking ahead to his next big tournament – the Toyota Series Championship on Lake Cumberland.

“I’m excited about that one,” Huff said of the Championship, which comes with a $235,000 top prize. “I think it’ll kinda set up in my wheelhouse. It’s one I’ve been looking forward to all year.”

Even with the next tournament already on his mind, Huff said he is going to cherish this season, even if it takes a minute to sink in.

“It’s just crazy and kind of surreal. You don’t really realize it until you get home and look at the wall at the trophy sitting there and realize, ‘I actually pulled that off.’

“The big factor for me this week was the weather. If we would have had some nasty weather there would have been some big bags caught on a spinnerbait and stuff just beating the bank. I was super lucky the weather cooperated, and I didn’t lose any – It was just meant to be.”

A complete list of results can be found at FLWFishing.com.

Lieblong took home an extra $1,000 as the highest finishing FLW PHOENIX BONUS member. Boaters are eligible to win up to an extra $35,000 per event in each Toyota Series tournament if all requirements are met. More information on the FLW PHOENIX BONUS contingency program can be found at PhoenixBassBoats.com.

The top 10 co-anglers on the Table Rock Lake finished:

The Toyota Series at Table Rock Lake was hosted by Explore Branson. It was the third and final tournament in 2020 for Plains Division anglers. The next event for Toyota Series anglers will take place on Dec. 3-5 – the 2020 Toyota Series Championship at Lake Cumberland in Burnside, Kentucky. For a complete schedule, visit FLWFishing.com.

The 2020 Toyota Series consists of eight divisions – Central, Eastern, Northern, Plains, Southeastern, Southern, Southwestern and Western – each holding three regular-season events, along with the International division. Anglers who fish all three qualifiers in any of the eight divisions and finish in the top 25 will qualify for the no-entry-fee Toyota Series Championship for a shot at winning $235,000 cash, including a $35,000 FLW PHOENIX Bonus for qualified anglers. The winning co-angler at the championship earns a new Phoenix 518 Pro bass boat with a 115-horsepower outboard. The 2020 Toyota Series Championship will be held Dec. 3-5 on Lake Cumberland in Burnside, Kentucky, and is hosted by the Somerset Tourist & Convention Commission and the Burnside Tourism Commission.