The Ava Lady Bears softball team added two wins to their season record last week with wins over Seymour and Lebanon. Ava now has a record of 13-2.

The Lady Bears opened  play last week with a 15-0 shutout in a three inning game with Seymour.

Ava scored in each of the innings.

The Lady Bears used one hit, three walks, a hit batter and a Seymour error to put their first four runs on the scoreboard in the first inning. Julia Henry drove home the first run with a double, after the first two Ava hitters had walked. A hit batter loaded the bases, before a walk forced home another run. The third run scored on a groundout and an error allowed the fourth run to score.

Ava scored nine of their runs in the second inning. Olivia Gastineau led off with a double and moved over to third on a Lexie Gastineau single. Henry brought home the first run with a sacrifice fly. Miquia Heinlein reached on an error. A walk to Keely Akers loaded the bases. A Macee Cutbirth sacrifice fly resulted in another run. Sara Mendel doubled home another run. The eighth run of the inning resulted from a Seymour error. Taegan Snow doubled home two more runs. Another Olivia Gastineau double added a run. Lexie Gastineau followed up with a single. Henry doubled home two more runs.

Akers walked to lead off the third inning and came home on a Cutbirth triple. The bases were loaded by two hit batters and a walk forced home the final run of the game.

Henry took the win for the Bears, striking out three in the game.

The Lady Bears followed up the Seymour win with a 7-4 victory over Lebanon the next afternoon on the Ava home field.

Ava scored first with two runs in the third inning. Mendel led off the inning with a single. A sacrifice bunt and Snow single moved Mendel around to third. Mendel scored on an Olivia Gastineau single. The bases were loaded on a Lebanon error. Henry singled in the second run.

Lebanon came back with a run in the fourth.

Ava would recoup this run in their half of the fourth when Cutbirth singled, advanced to second on a ground out and came home on a Snow single.

The visitors took a 4-3 lead with three runs in the fifth.

The Lady Bears came back in the bottom of the inning to tie the score with back to back doubles by Olivia Gastineau and Lexie Gastineau. Ava would regain the lead on a Lebanon error. The Lady Bears added two more runs in the inning when Cutbirth doubled in a run and Mendel singled home another.

Ava shut down Lebanon in the final two innings, ending both with double plays. The first saw shortstop Olivia Gastineau flip to second baseman Cutbirth forcing a runner and a Cutbirth throw to first to complete the double play. In the next inning, Cutbirth and Gastineau reversed the flip at second to start the double play.

Henry pitched the full seven innings for the Lady Bears.

The Lady Bears will travel to Bakersfield on Thursday, Oct. 8, and host Gainesville on Monday, Oct. 12. 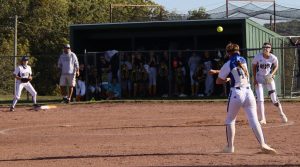