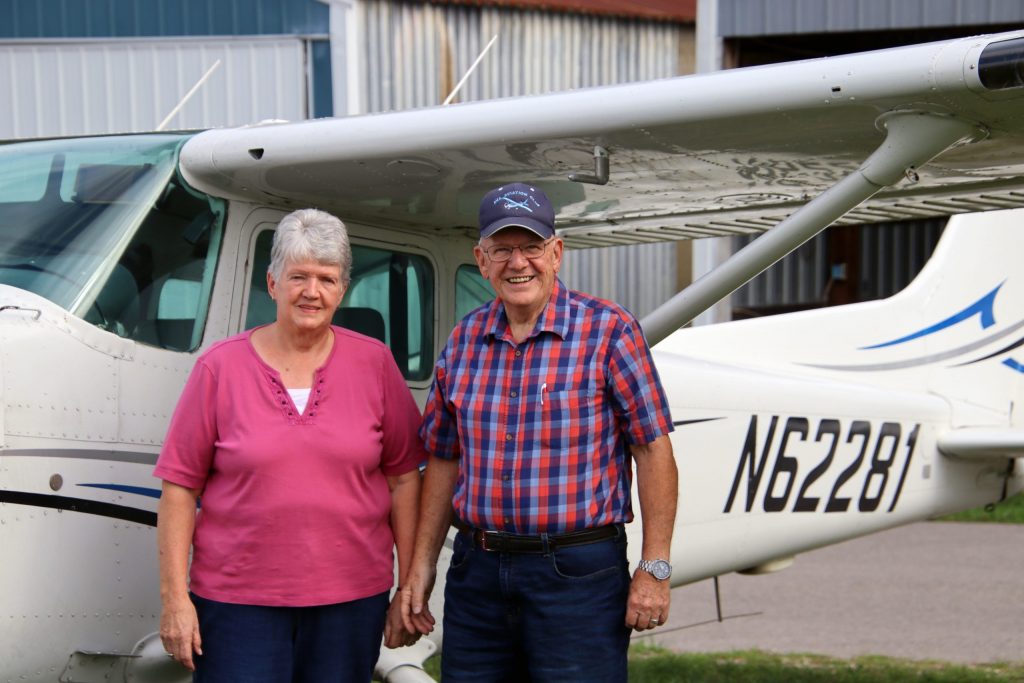 The Bill Martin Memorial Airport, Ava’s municipal airport, can sometimes be forgotten in its location in the northwest corner of the city.

Many times the only reminder of the airport is when a plane takes off to the east, or lands from the east, on the airport’s 3,600 foot runway and crosses Hwy. 5.

The runway or airport facilities are not easily visible from any roadway.

But the airport continues to serve area pilots, persons flying into area and persons making a fuel stop as they fly cross country. 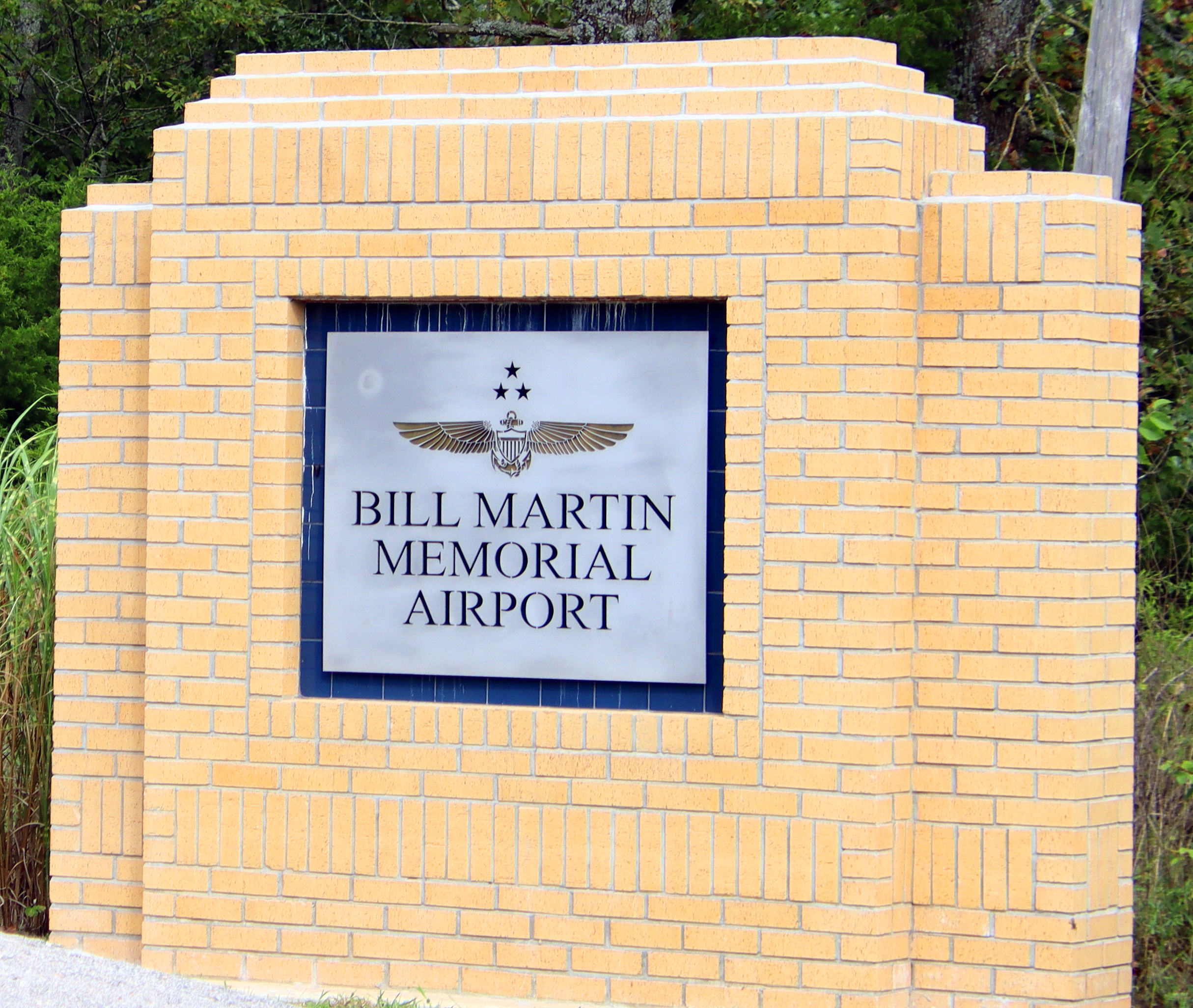 Doug Berger/Herald
Ava’s Airport is named after U.S. Navy Vice Admiral William Martin, who was born in Ava on May 5, 1910.

“A mile of highway will take you just a mile…but a mile of runway will take you anywhere,” is an old saying, but it can be descriptive of an airport, Ava airport manager David Davidson stated.

Along with the use by area pilots, the airport has been used for a variety of purposes.

People have used it to check on business, fly in for visits with relatives, pick up fuel while crossing country, fly in to check on properties they have in the area, and numerous other reasons, Davidson stated.

He says that one of the more unexpected uses is when people fly in to pick up dogs they have bought. The area has some respected dog breeders, and persons will fly in from around the country to pick up a dog, he said.

There are two airline pilots who fly in to go fishing at Rockbridge, he said. They will borrow the courtesy car at the airport to drive from Ava to Rockbridge.

Davidson stated he has even used an aircraft flying out of the Ava airport to help find some cattle that the owner had been unable to locate.

The air ambulance services and crop dusters also use the airport.

The Forest Service will occasionally  use the airport for helicopters being used in the area.

Davidson also stated that the airport occasionally do have some jets come in.

“The community benefits from the use of the airport in many ways you wouldn’t think,” he stated.

Davidson explained that when the city put in aviation fuel at the airport, it helped a lot in attracting cross country flyers. The local availability of fuel also makes it easier for local aircraft owners.

Currently there are six planes based here, he said. Among these planes is a plane owned by the Ava Aviation Club.

The club had part of its origins in a program started with a grant the Ava School District received to offer some classes not usually given in the regular school curriculum. It was decided to offer an aviation class.

Adults were also eligible to attend the program, along with high school students.

Aviation has elements which cover numerous disciplines including math, physics, geography, medical, communications along with other areas, Davidson stated. The fact that aviation touches all these fields is one of the things that make it interesting, he added.

Davidson said he was surprised by the interest from the community in the program.

He explained they had placed an advertisement in the Douglas County Herald, and received a good response.

Some of those responding had some background in aviation, possibly having previously started an instruction program, but didn’t finish because of time or financial constraints. Many of these persons were now retired and had more time and financial resources.

The program conducted through the school was limited to ground school instruction.

Some of the participants became interested in going the next step and actually receiving flight instruction. Davidson explained that the club got together to help spread out the cost of an airplane. The group looked around and found an airplane that fit their needs.

There are 11 members in the group. Almost all the group members treat flying as a hobby, he said. Davidson pointed out they keep the number at this level so that the members have the ability to use the plane when they wish. Today they fly a Cessna 172.

One of the members has bought his own plane.

The club helped the airport remodel a building as an airport lounge area.

When they first started out, members of the group needed flight instruction. Davidson, who started flying when he was in high school, was an instructor and was able to provide this service.

Davidson stated he had no special reason he started flying, but had flown a couple of times and thought it would be interesting. 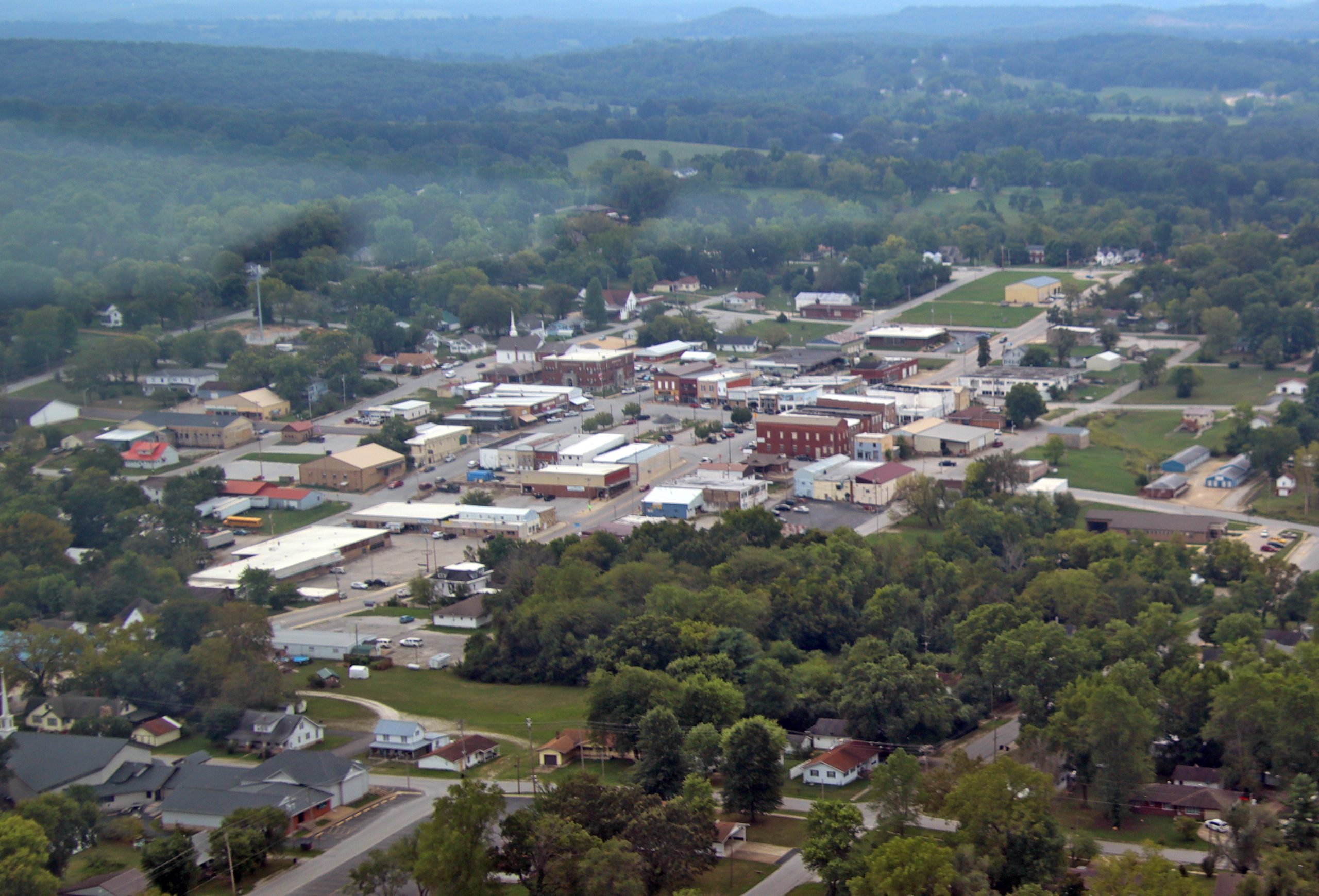 Doug Berger/Herald
Downtown Ava as viewed from the air.

Davidson stated he soon realized if he wished to fly very much, he would have to find a way to finance it, so he decided to become a flight instructor. Initially he started instructing in Springfield.

During this time, Davidson met Dr. M. Graham Clark, president of School of the Ozarks. Davidson would fly him to places, and found out they wanted to start an aviation program at the school. Davidson stated it worked out well for him, because he wanted to go to college, and he could do it as a flight instructor.

His work assignment at the school was teaching flying. It was also in this capacity as a flight instructor that he met his wife, Mary Kay, who was taking the course.

The school did not have an airport and they originally used a parcel of land that is now a white water park. Mary Kay Davidson stated that she soloed off that parcel.

Davidson is the recipient of the Wright Brothers Award from the Federal Aviation Administration for 50 years of safe flying.

The airplanes have not changed as much as the electronics involved in flying, Davidson stated.

“We started out reading off a map, but today the communications are so much greater,” he added.

Doug Berger/Herald
The Fox Trotters Facility as viewed from the air.

The Ava has made several improvements to the airport and has plans for improvements in the future. The state assisted the city in resurfacing of the runway and the airport has the potential for increasing the runway length. He added that he would also like to eventually see more hangar space.

The Bill Martin Memorial Airport was named in recognition of U.S. Navy Vice Admiral William Martin, who was born in Ava on May 5, 1910. Martin is recognized as a pioneer in naval aviation in the areas of night and all-weather flying.

A recognition plaque hangs in the lounge at the airport and states, “U.S. Navy Vice Admiral Martin graduated from United States Naval Academy in 1934. He went into naval aviation and was considered one of the preeminent test pilots of the time.

He flew a record 440 night landings on carriers during his service in the Pacific during World War II and commanded bomber and fighter squadrons from the USS Hornet and the USS Enterprise.

For his efforts in World War II and after he was awarded the Distinguished Flying Cross, two Legions of Merit, two Navy Distinguished Service Medals and the Silver Star. He was awarded the Silver Star for conspicuous gallantry as a pilot of a fighter airplane and flight leader in Fighting Squadron Ten attached to the USS Enterprise in action against enemy Japanese forces in the vicinity of Saipan in June of 1944. In April of 1967 he became the Commander Sixth Fleet.”