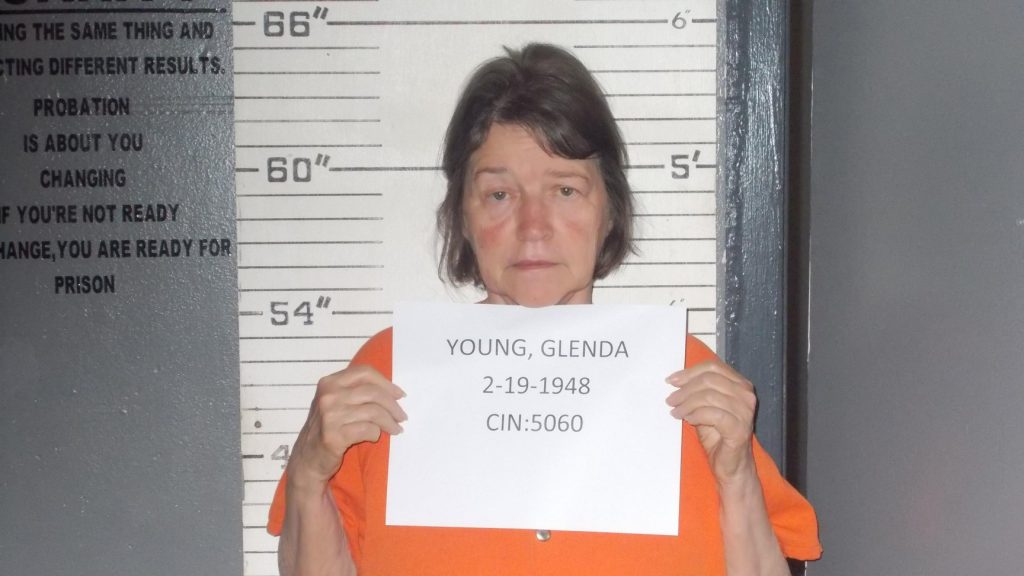 Glenda Young, 71, of Ava, was found guilty of 1st Degree Murder for the 2017 murder of her husband, David Young by shooting him in the face. Glenda initially alleged the gun went off by accident, later alleged it went off during a struggle, then testified during the trial that it was an accident.

On Friday, June 12th, Glenda Mason Young, 71, of Ava was convicted of First Degree Murder and Armed Criminal Action for the killing of her husband, David Young, by shooting him in the face.

The incident occurred on January 20th, 2017 at the couple’s home in the Squires area south of Ava.

The trial took place in the Douglas County Courthouse with Christopher Wade serving as  Prosecuting Attorney. The Defense Attorney was Kelli Anderson of Springfield.

A formal sentencing hearing has yet to be scheduled, but in Missouri there is only one sentence for First Degree Murder.

Glenda Young remains in custody at the Douglas County Jail where she is not eligible for bond. She does have the right to appeal the decision and ask for a retrial.

On January 20th, 2017, Glenda Young alleged it was an accident. She said her husband of 8 years, David Young, had been cleaning a gun while sitting in his recliner when it went off accidentally.

Witnesses testified that Glenda Young called the Douglas County Sheriff’s office just after 4:00 p.m. that day to report finding David deceased. Officers responded to the scene and found lots of blood around David’s chair, through the living room, and in the bedroom where they found David’s body.

Officers also recovered a gun cleaning kit, the gun, magazines for the gun, a cellphone, watch, eyeglasses, and a hat from the decedent’s chair.

Officers interviewed Glenda at the scene, capturing most of the interview on bodycams.

Glenda alleged that David had been alive when she left him at 3:00 in the afternoon. She left to purchase lottery tickets from a local store and then chased a runaway dog. She  claimed to have discovered David’s body when she entered the home around 4:00 p.m.

That’s the timeline Young provided to Sheriff’s Deputies on the day of the incident.

Like why did the coroner place the time of death earlier, based on the condition of the body?

The gunshot wasn’t immediately fatal, so what happened between it and the time of death?

And why were some items from the scene covered in blood, while others weren’t?

“It became clear that the scene had been staged to look like an accident,” said Douglas County Sheriff Chris Degase.

Those were the harrowing last words of David Young, left on the voicemail of a friends phone on January 20, 2017.

David Young called another friend. And he attempted to call the Douglas County Sheriffs office.

Then the phone calls stopped.

During an interview with local radio station KKOZ, Prosecutor Chris Wade said “That single voicemail destroyed Glenda Young’s entire alibi. It’s extremely rare to have a victim tell you in their own voice what time he had been shot.”

In subsequent interviews by both the Douglas County Sheriff and the Missouri State Highway Patrol, Glenda Young changed her story, instead alleging that the gun went off during a struggle between herself and David.

Witnesses testified that the marriage wasn’t healthy, that David had become interested in another woman and was talking about divorcing Glenda. Glenda testified that David “was being a bully and I wanted to teach him a lesson.”

And then investigators found the insurance.

Douglas County Sheriff Chris Degase testified that they found over $1.1 million in life insurance polices and accidental death policies, mostly purchased in the year leading up to the shooting.

Glenda Young waved her right to a trial by jury, opting instead for a “bench trial” where the Judge hears the evidence and decides the outcome.

In his closing remarks, Judge Holden remarked that while a jury would only provide a guilty or not guilty plea, in a bench trial he is able to explain what he believed happened and why he chose to rule as he did.

“There’s lots of evidence here,” Holden said. “The primary piece is the call log – it sets the time of death.”

He went on to mention the forensic evidence presented including the amount of blood loss, angle of the bullet, blood patterns throughout the home, and Glenda Young’s unclear actions between 11:00 a.m. and 4:00 p.m.”

“I think she planned this,” Judge Holden said. “She shot him as he napped in his chair, then left scared when he didn’t immediately die. She came back in to find him making phone calls, and took action to immobilize him and stop him from calling for help.”

After Judge Holden found Glenda Young guilty “beyond a reasonable doubt”, she was taken into custody by the Douglas County Sheriff. She was transported to the Douglas County Jail where she awaits formal sentencing and any rulings from the Court of Appeals.