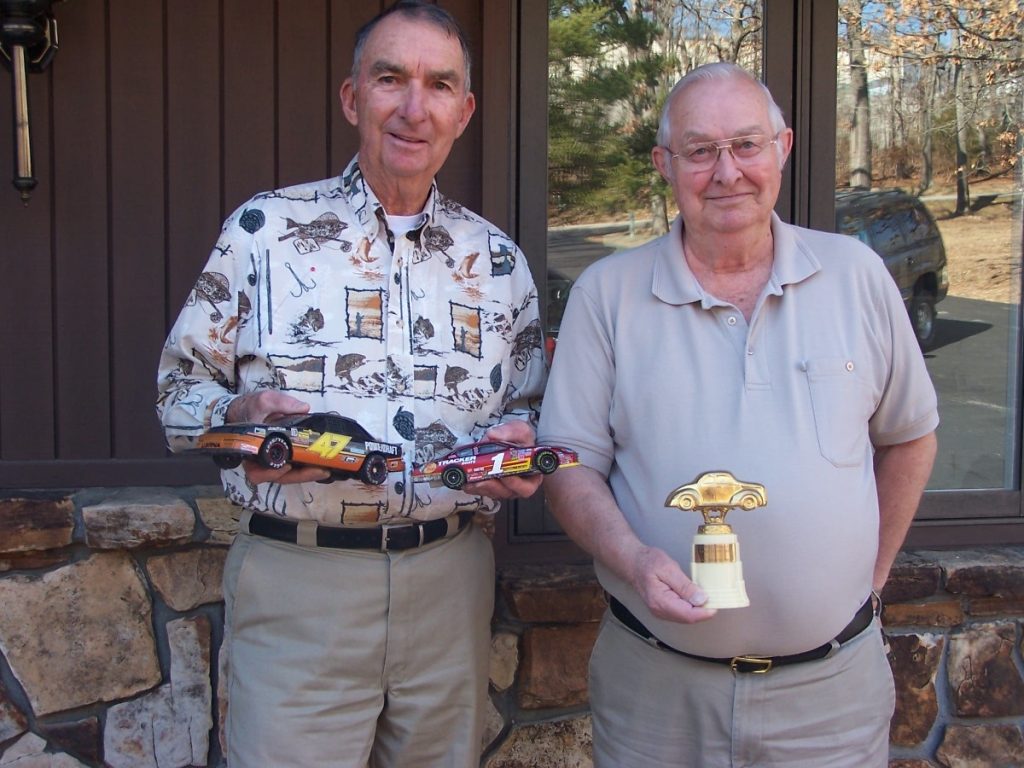 Charlie Campbell, left, and Jack Singleton, right, were avid racers in the late ‘50s. Charlie stopped after making a promise to his bride that he would quit, but Jack continued to participate in the sport for many years. In the photo above, Charlie, who is associated with Bass Pro, is holding replicas of the Bass Pro racing cars, and Jack is displaying the trophy Charlie won in a Trophy Dash race in the late 1950s. The trophy dash is a five lap race with the five fastest cars. Herald photo

The idea may have started from a group of young high school students who passed Doc Sallee’s Machine Shop every day at noon. They were intrigued by the midget racer he was building in his shop.

Or, maybe the spirited idea was developed on the dirt track Charlie Campbell’s dad built for his sons and their friends to race bicycles. The track sat across from the family home, close to where Subway and Family Pharmacy are located today.

No one seems to know exactly why the sport of racing made it’s way to the small town community of Ava, Mo. but it did, and for a short period of time it was a huge success. And, it was fun.

Ava was different in those days. In the mid-1950s, Ava was truly a center of activity, especially on Friday and Saturday nights. And, the square was the place to be.  In fact, it’s been said that residents would park their cars on the square during the day so they would have a prime spectator’s seat on Saturday night.

Parking a car during evening hours was most generally a problem because local merchants stayed open until at least nine o’clock, and the town was busy and full of people until well after dark.

Entertainment venues were also on or near the square.  The Avalon theatre was the place to watch an early movie, and the local roller skating rink was just down the hill from Norman-Gentry Drugs, and in those days everybody skated. For  late night entertainment it was the Star Theater.

However, for many residents, just sitting on the square, visiting with neighbors and people watching, was a favorite pastime. But, sometimes it was downright amusing to watch local patrons of the Brown Derby or Hole-In-The-Wall tavern maneuver their way home for the night.  There was always something going on.

And, on occasion, if you were very patient, you would see a fight.

But Ava changed just a little bit in 1956 when the Ava Speedway opened for its first race –– this was  new and exciting entertainment, and for many years on Saturday night, the speedway was where the crowds would be.

And, those Ava boys who used to walk by Doc Sallee’s machine shop and ogle the midget race car –– they were a big part of it.

The impetus for Ava Speedway  came from the Thetis Jenkins family and the fact their son, Chester, loved to race.

Chester first started racing on the Mid-States circuit, and later, when one of the tracks closed, Chester and his dad saw an opportunity and the Ava Speedway was born.

The race track was located on old Hwy. 5 north, about ¾-mile outside the city limits on the left side of the road.  The land was owned by Fred Lethco, Sr., and with the ideas of Thetis Jenkins and his son, it was soon a quarter-mile dirt track.

Local contractors were hired to move heavy dirt and shape the track, and Thetis bought a road-grader for on-going maintenance, but in many ways, the track started becoming a community effort.  The City of Ava helped install the lights and set the large light poles. Bleachers capable of seating 700-plus spectators were built from oak.  It was soon the best lit track in the area and it had a good reputation, and during it’s existence it attracted racers who later became legends in local racing.

Opening night at the track was a grand affair.

Bouquets of roses were delivered to all the girls in concessions. The flowers were sent by John Victor who likened the grand opening of the Ava Speedway to the Kentucky Derby.  However, it has to be said that the speedway was known for having the prettiest girls work the ticket counter and concessions – Delsie Heriford, Peggy Cutbirth, Iris Ann Jenkins, and all the girls from the Jenkins family.   That was part of the appeal.

A capacity crowd of 1,000 people came for opening night.  Admission was 75¢ for adults and 25¢ for children.

The Speedway also provided something other race tracks didn’t provide – a program.  The program listed the drivers and car numbers, along with the officials and race time trials.

In Ava, the sport of racing had captured the hearts and interest of Tony Evans, Charlie Campbell, Larry Case, Jack Singleton, Leslie Heriford and several other local boys, and just like Chester Jenkins, they were hooked on the thrill of running the circuit.

Prior to Ava’s track, most of the guys had raced the circuit which meant Humansville on Tuesdays; Taney Bowl Speedway in Branson on Thursdays; Springfield on Saturdays; and sometimes, Rolla, West Plains, and Arkansas.  It was a demanding pace.

Ava was also a member of the Mid-State Racing Assn. circuit.

Even though money was scarce in those days, Jack Singleton, Junior Brown and Charlie Campbell bought their first race car from Bill Alexander for $300.  They each contributed $100, and that was a lot of money in those days because they only made about $30 a week.

The first run for Charlie and the $300 car was a race at the Branson track.  Charlie loved to drive, and according to his partners, he was fearless and he proved it his first run. That night, barely off the starting block, Charlie dodged and pushed through two wrecked cars. Watching from the pits, Junior and Jack were both a bundle of nerves as they thought they had lost their big investment well before the race car even completed it’s first lap.

Charlie’s #66 car was serviced and maintained by Murrell Alms, of Ava. Alms volunteered for the job with one request, he asked that the name of his shop, Alms Garage, be painted on the side of the car.  He wanted the advertising.

The car everyone wanted was a 1933-34 Ford, 3-window coupe.  It would hold the track.  But, most of the cars were semi-modified flat head Chevy coupes and Fords.

Cars had to be stock and could not be later than a 1948 model.  Cars also had to have a starter that would actually start the car.  On the track, cars ran in second gear and many drivers welded the gear in place or had a heavy hook crafted around the shaft to keep it from jumping away.

But, no matter what type of car or racing philosophy was used, the new Ava Speedway attracted all ages and a host of personalities.

A junior in high school, Dale Davis remembers parking cars at the Speedway so he could get in free, and Jack Ritter who grew up across from the speedway recalls climbing a tree in the family’s front yard on Saturday nights so he could be a part of the excitement.  He had a perfect view.

Bob Crain bought a 1933 Ford Coupe from a body shop at Hollister and had the car readied for racing.  Tony Evans drove the car until he was drafted, then Bob raced the car in several events before he sold it.

Another regular at the track every Saturday night was the ambulance driver Lyle Clinkingbeard.  No one recalls any wrecks that required his help, but he was always available.

Racing soon evolved into a coveted and popular event during those early years, but the core make-up of the sport was much different than it is today.  Back then most cars were supported by friendships and fans, not sponsors. Drivers and owners got by with a welding torch, improvised rigs and one good mechanic.  To travel, race cars were loaded down with tools, two extra tires, and then pulled with tow bars behind a regular vehicle.  Expenses were kept to a minimum.  And, if you were good enough to win a purse, it might be $250.

Promoting race night in Ava was accomplished by strapping speakers on a car and cruising around town and neighboring areas, blaring out the details. The Herald did carry ads from time to time, but the standard form of advertising was a PA system and the voices of Max Campbell or Lester Jenkins.

There was also a fun sense of camaraderie between drivers.

Charlie Campbell tells a story about racing in Branson at the Taney Bowl Speedway and running out of gas with one lap to finish. Back then if you ran out of gas on the track drivers raised their left arm out the race car window.  On this occasion, Lloyd Tabor, a local legend who was one lap ahead of the pack, saw Charlie’s arm and pulled in behind #66 and pushed the car around to finish the race.  Tabor still finished first, and Campbell came in third.

It was a good race.

The local sport of racing created lifelong friendships for many, and perhaps for a few, a competitive on-going feud. But nonetheless, this spirited beginning left an indelible impression as most of these guys still enjoy and participate in the field of racing today.

It is that spirit that keeps the Ava Speedway alive.

In fact, if you visit the speedway when the grass is mowed and sun is shining, you can feel the excitement and maybe even see the old race cars with clumsy-looking roll bars, no fenders and skinny tires.

Or, hear the staccato sound of motors revving in the background, spectators cheering, stacks of skinny tires all-around, and witness clods of mud being slung into the air from tires sliding around the dirt track.

Close your eyes, use your imagination and listen, it’s there.

Today, the ghosted impression of the speedway’s circular track is still distinguishable and an outline of the straight-away embankment on the north side also remains noticeable.  And, even though the field is no longer the grand raceway it was in the ‘50s –– it’s indomitable spirit still exists.

The spirit thrives in the memories and hearts of those who held a passion for the sport of racing and lived it…and they remember it well.