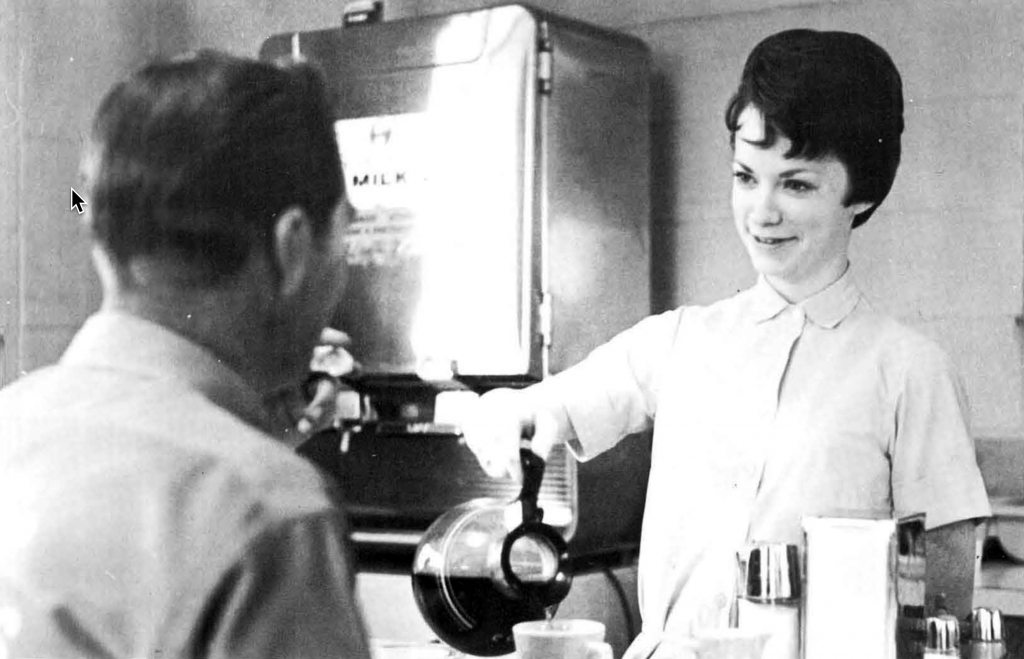 Rounding out the family operation of the restaurant is Mary Martha, a daughter.

(Editors Note: This article is reprinted from  the 1963 Missouri State Highway Commission Annual Report, investigating how the Route 5 bypass had affected Ava.

One of the things, his wife’s good cooking, he’d been used to for years. (“You can plainly see that,” he grins, patting his ample stomach.) But the other thing, that new bypass highway, took a bit of getting used to on his part. 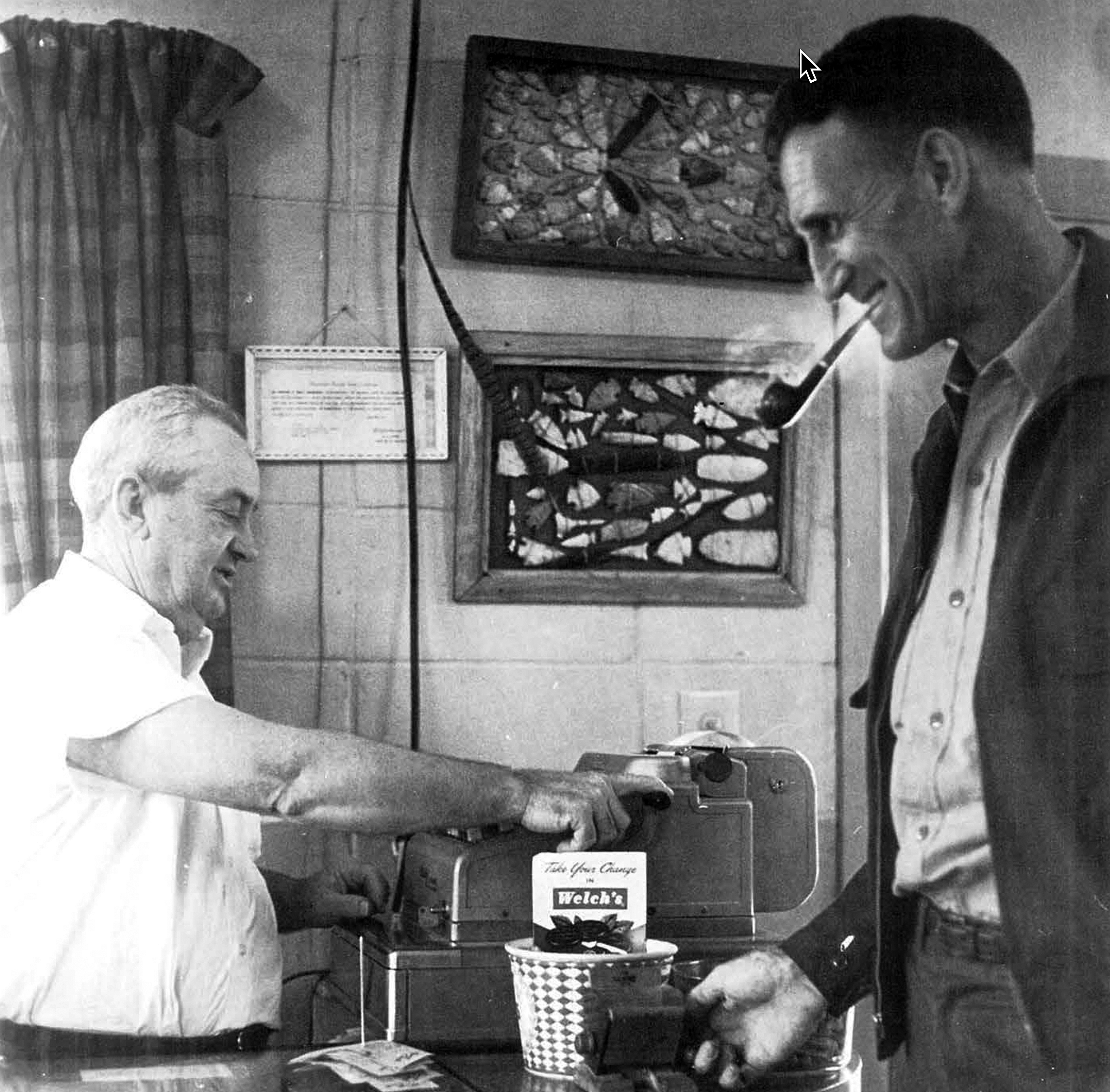 His cash register bell tinkles about twice as merrily as Harold Hutchison, left, thought it would when he started in the restaurant business on Route 5.

A stocky, friendly man, Hutchison was born and grew up in this Douglas County seat town. Here he raised a family and made a living.

Most of the time he made that living by filling gas tanks of people’s cars – before he started filling their stomachs with his wife’s food.

Both were good locations for a business whose lifeblood was gasoline. “Old 5” traffic, local and long distance, had to pass by his station.

Between busy periods of serving and chatting with customers in his restaurant at the junction of new Route 5 and Missouri Route 14, Hutchison talked about the coming of the bypass.

“It cut about a third off my filling station business there on the square,” he said. “Most of the loss was weekend tourist business.

“See, I used to get lots of business from people on their way to and from the lakes south of Ava – Bull Shoals, Taneycomo and Norfolk. But when the bypass opened, my credit card business, for instance, dropped about four-fifths.

“That kind of loss, along with eight gas wars in two years, made me decide to quit. So I put my place and equipment up for auction just to get out.”

During those two years when Hutchison was fighting the gas wars and watching his gallonage drop new businesses were building along Missouri Route 14 at its intersection with the new bypass. (Entrance onto the new highway was restricted because it was designed for limited access.)

One of these businesses was a restaurant, built on a three-acre plot along with a service station and a motel. Early in 1963 Hutchison got an opportunity to lease the restaurant.

“We’d never been in the restaurant business,” he recalled. “But my wife had always been a good cook at home so we figured why not in a restaurant, too.

“We figured backwards and forwards – and then figured again – as to how much money we’d have to take in to make the business go. And it’s turned out to be twice as good as we ever expected.”

He opens “Hutch’s Corner” at 5:30 each morning and stays there until he closes it a 9 each night. His wife. Helen, and his daughter, Mary  Martha, also work there in addition to five other employees.

“I usually work seven days a week,” said Hutchison, “and I enjoy it.” 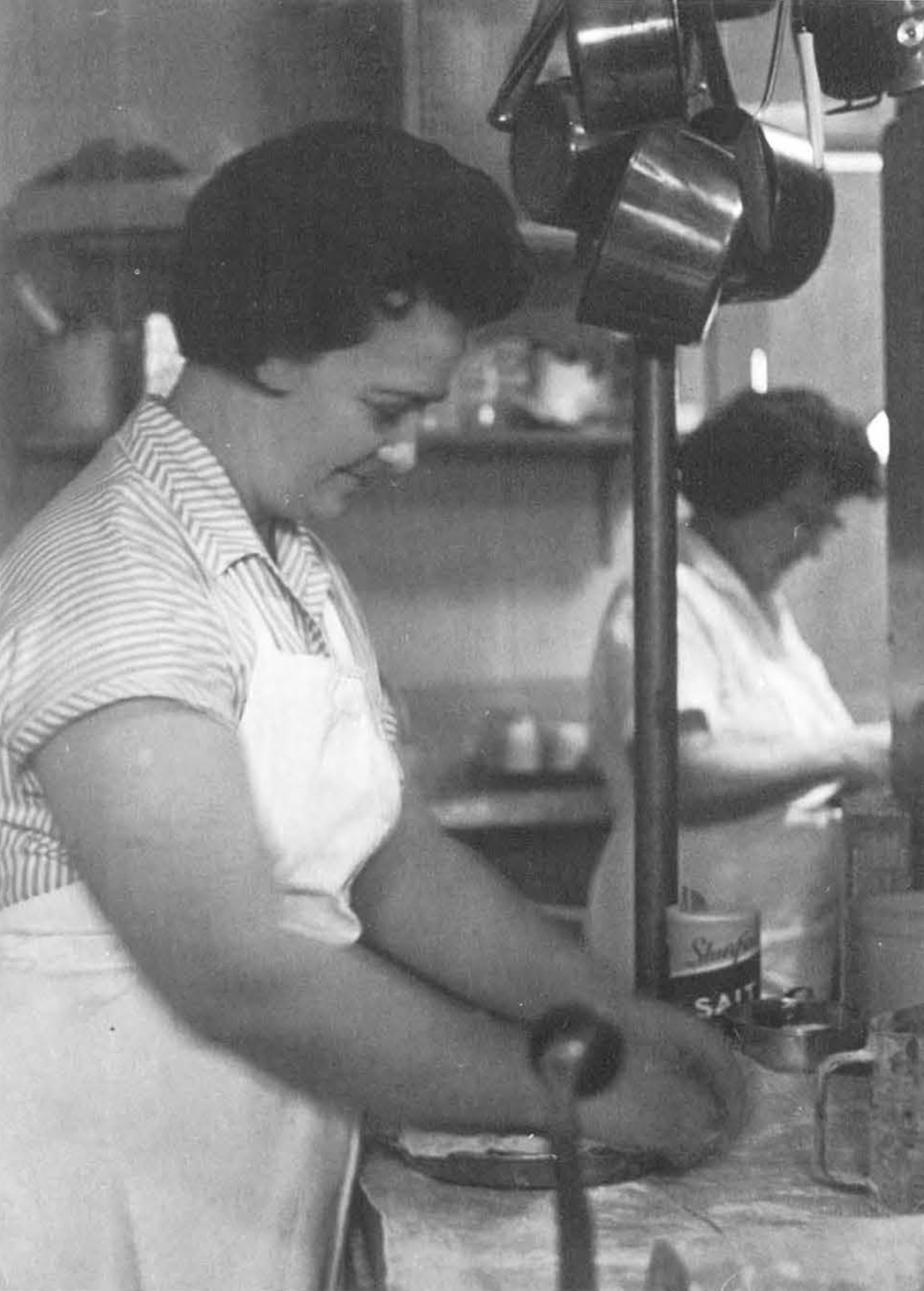 Mrs. Hutchison’s output of pies has grown, too. Instead of two or three a week at home, she now bakes from 10 to 16 a day for restaurant business.

And his wife, instead of baking two or three pies a week, now turns out from 10 to 16 a day.

“Thanks to her cooking – and the new highway,” Hutchison added, “we have people coming in here from all over. A lot of people heading for the lakes will swing back around here to eat because the highway makes it so easy to do.

“Why, not long ago at one time there were 18 people in here from Mansfield. And a lot of them will drive down for Sunday dinner after church. We like to think that the food attracts them but there’s no doubt that the highway makes it easy for them to come.”

That’s why Hutchison now talks about the new highway and says flatly, “It’s the best thing that ever happened here.”

The only complaint he hears about it, he says, concerns the intersection with Route 14. Two people have been killed in the several accidents that have occurred there.

“But I don’t think there’s a better one in the state,” said Hutchison. “I don’t know why the accidents happen – you can see as far as you want in both directions. I don’t think the fault lies with the intersection itself.

“A lot of people fuss about these accidents – and certainly they are bad. But we had the same thing when Old 5 was opened. I was just a kid but I remember hearing about the old cars – and even some horses and buggies and wagons – running into each other.

He pointed out the window to the highway. “But you just look around,” he said. “You won’t find a prettier highway anywhere.

“I hear more compliments on this road from people who stop here to eat – from New York, Illinois, Oklahoma, Ohio, all over. It’s wide and straight and smooth. And you can still see the scenery that this country is famous for.”

He stopped momentarily to greet three customers. Then he went on:

“I’m telling you for sure that the time is coming for this country down here. In times past I’ve felt sorry for the fellows who’d come in down here and spend a wad of money trying to make it big on a farm or ranch. And when they’d  lost their nest egg they’d have to go back to working for wages in the city.

“This country just wasn’t made for that. I always told them that this was a fine place to live but a poor place to make a living.” He grinned wryly. “You know, there’s never been much of a demand for blackjack (oak) and rocks in my time down here.

“But if things keep going as they are in the economy as a whole there are going to be some big changes around here in ten years. And they’re  going to ride in on highways like this one out there.”

He sat down in the booth, talking earnestly.

“For myself I can’t think of anything I enjoy more than just jumping in the old pickup truck and clattering around the country roads.” He paused a minute, grinned widely, and went on.

“There’s always something to see and you run onto somebody that you haven’t seen for a long time and you talk a while and maybe try to cheat him out of a horse or something.

He grinned, then became serious again. “What I’m getting at is this: There are fewer and fewer places like this. We’ve got an area here from Springfield to West Plains and from Gainesville to Mansfield that has bout anything a man could be looking for in the way of recreation and touring. And this highway makes it east to get to.

“There just no comparison between the old one and the new one. Why, I used to drive Old 5 up to Mansfield when I was in the filling station. I would leave Ava early in the morning and by the time I got to Mansfield the sun had shown in every window. That’s how crooked the road was.

“I told my brother-in-law about it one day when he was visiting us and he called me a liar. So I took him with me.

“We were almost to Mansfield when he thought he’d proved I was wrong. The sun, he informed me, hadn’t come in the back window yet. About that time I hit that curve at the edge of Mansfield that swung due west and that old sun came streaming in that back window.

“Then look at what’s happened already to land around here, “Hutchison winds up. “Just a few years ago, before the highway came through here, three acres where this restaurant sits sold for $1500. Just this year one acre – and not even on the corner mind you – sold for $10,000.”

No wonder that Harold Hutchison calls the new bypass “the best thing that ever happened” to Ava.

The Hutchison restaurant, at right, above, is part of a three-acre development at the junction of Routes 5 and 14. Other businesses on the site are a service station and a motel to make a complete one-stop traveler service.