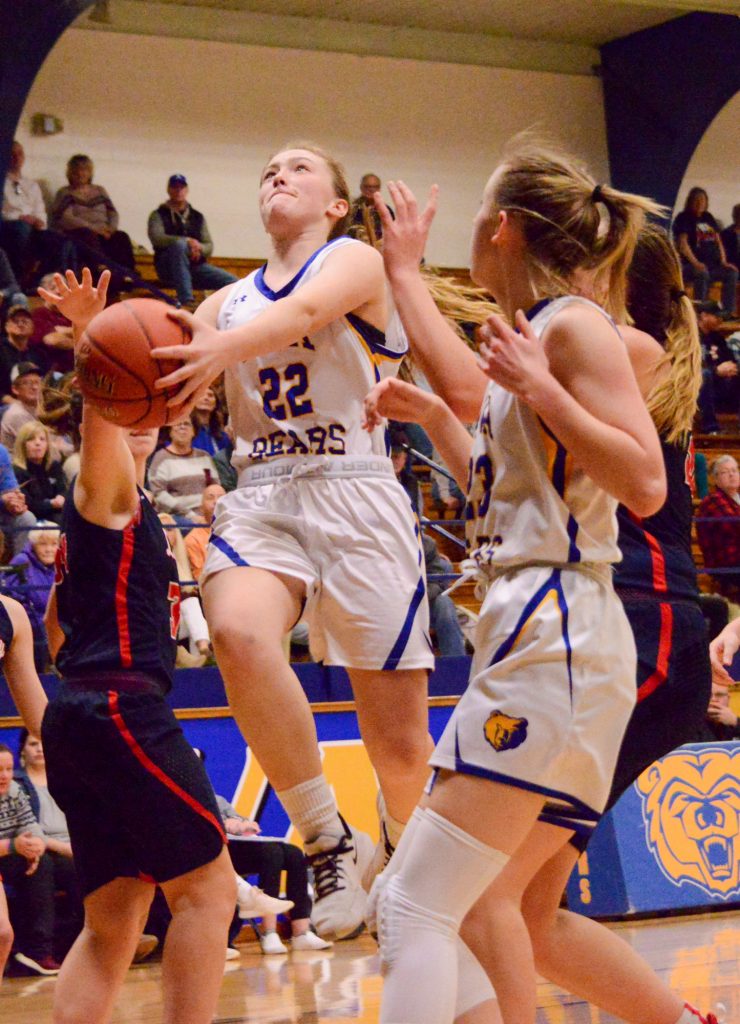 Ava High School freshman Olivia Gastineau (22) elevates for an attempt at the bucket during the final regular season game against Liberty on Thursday, February 20, 2020, in Ava, Missouri. (Jason Hoekema/Herald)

The last time the Ava High School Lady Bears had a really successful season was in 2013-2014 with a similar, 16-9, record. That year the team was led by Alyssa Paulsell to the top of the SCA and the District.

Since, the coaches have changed as have students. High school athletics is heavily dependent on talent within the community. Sometimes there are kids who can play ball, sometimes there isn’t.

Under Nathan Houk the girls’ squad has seen steady progress since his first season coaching the girls’ bench in 2016-2017.

Coach Steve Sanders had left the season prior, and with new coach comes a new program. Then sophomores Ashton Bewley and Lauren Mendel were moving up the ranks and learning the game.

Both took the top spots as scorers for the team in their junior years, but the Lady Bears had a less-than-optimal, 7-19, season.

This year the Lady Bears went 17-10 with the highest number of wins since that last winning season. In the SCA the Lady Bears still have plenty of room to improve from their 2-5 record. As with all good things, they come with time.

Every single year, the team brings in new talent as it bids farewell to the young ladies who will go on to graduate and move into the next phase of life. Welcome to adulthood, it’s tough.

Fossett scored a total of 213 points this season made of 81 twos, five threes, and 36 points at the line where she shot 67-percent. She led the senior class in scoring with a season-high 26 points in the game against Fordland early in the season.

Little worked the point and drove the lane for 72 field goals and added 40 extras from the line where she shot 65-percent, all for a total of 184 points this season.

Emaly Keyes led the seniors in shots from outside. This season she nailed 25 threes in addition to eight buckets inside. She totaled 91 points this season and is the specialty sharp-shooter which coach Nathan Houk will need to replace for the 2020-2021 season.

Year-class aside, sophomore Hannah Evans led the Lady Bears in scoring this season with 365 points and led in free throw percentage, shooting 80-percent at the charity stripe. Last year she was the break-out freshman with 179 points.

Two seasons under her belt, she now rocks a career consisting of 544 points with a team-high 113 buckets inside and was third on the roster with 19 three pointers and led in free throws with 82 points at the line.

This year she led the Lady Bears in scoring, hitting a season high 23 points… twice.

In her wake comes another impactful freshman, Olivia Gastineau. She seconded Evans in total points with 272 in her first season on the roster. She is third in scoring from inside with 74 buckets, right behind Fossett’s 81 hits from the inside.

She still has work to complete on her form at the line. In her first year she shot just below 60-percent. She could easily bump her numbers on the court up by taking advantage of her trips to the line.

Overall the Lady Bears shot a 65-percent from the stripe, Evans up front with a .804 followed by Little at 66-percent. Sara Mendel came in third on the roster from the line, hitting nine of 12 for 75-percent at the stripe.

The Lady Bears had some highlight reel to replay this year starting with 30 buckets pounded inside over Conway. That game was also the season-high with the Lady Bears scoring 75 points in that win.

Next was the big win at the New Covenant Academy Tournament where the Lady Bears set their first season-high in three pointers with six against NCA in the opening round. They later tied that number playing against Mountain Grove a couple of games later.

Again, the Lady Bears shot at 65-percent from the line. They did, however, set their season high free throw shooting percentage against Forsyth at the Lady Lion tournament with an .846 at the Lady Panthers’ expense.

Not all numbers are positive, though. Ava hit a high of 21 team fouls in the loss against Cabool near the end of the season.

Even with the loss of four seniors this season, the roster still holds potential with several first-year players making varsity appearances in this season.

In numerical order Baylan Alexander scored 59 points this season, most from the post where we could see her play more as she develops as a player. Playing in the spot in the paint, she can improve pointwise with shooting at the stripe.

Sara Mendel was a freshman on this year’s roster who also put up 59 points. Mendel was this academic year’s softball hero as a first-year pitcher and is a multi-sport athlete. With 25 buckets and a .750 at the stripe, her length and shooting capability may be something to watch as she continues through the next three years.

We all know about Olivia Gastineau, but sometimes overlooked is her sister. Lexie has speed and ball-handling skills making her an idyllic shooting guard as well as a combo guard if used as a reliever for her sister, who may fill the spot of Eden Little at the point.

Celia Fossett can get some height and is good on the layup in the limited varsity time she played. With 14 points from five twos and a three pointer she may develop into a formidable center who can shoot from inside and outside near the wings or a forward taking advantage of gaps in the defense to roll the paint.

The Lady Bears maintain their length with newcomers in Sara Mendel and Keeley Akers.