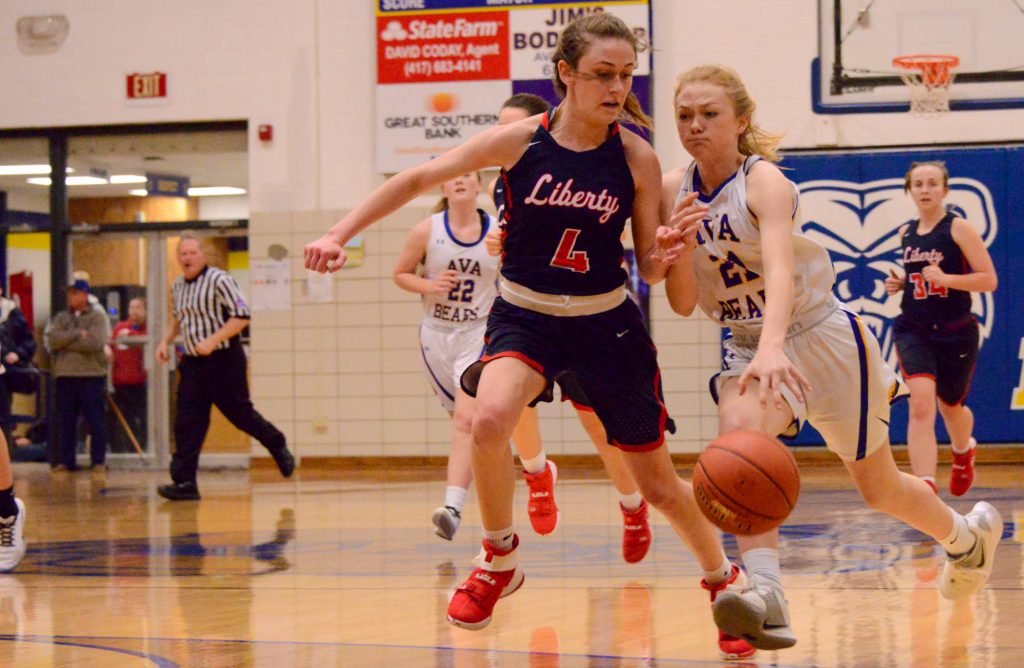 Perhaps not the way anyone wished it would go considering it was senior night and the final game where Claire Fossett, Emaly Keyes, Eden Little and Sam Lawson would set foot on the home maple strips one last time.

In the end, Liberty–Mountain View’s Kinley Richards handed the Lady Bears their sixth straight loss (versus Liberty) with seven shots from downtown. With a 24-5 first quarter, Ava’s fate was all but certain. 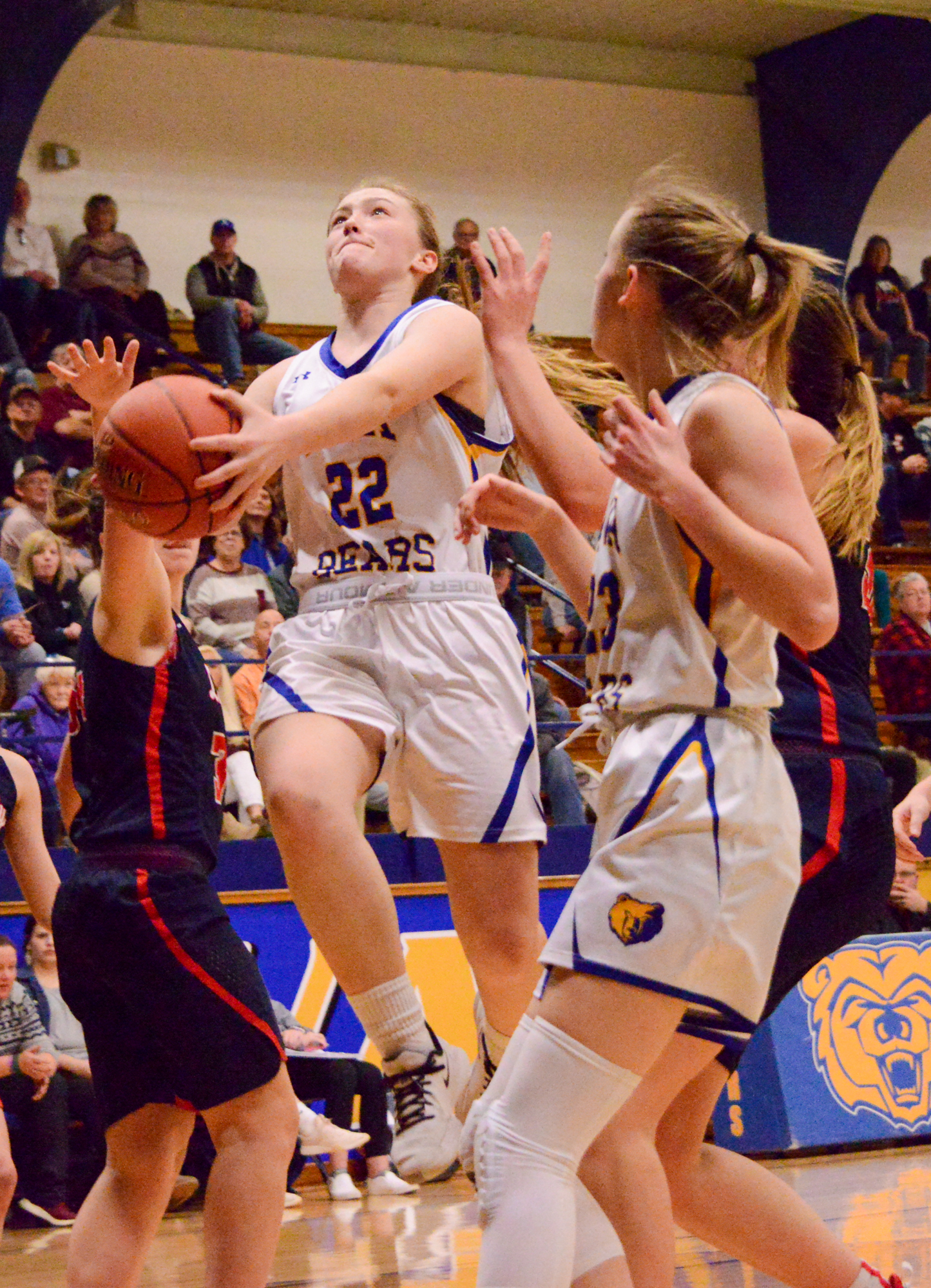 Ava High School freshman Olivia Gastineau (22) elevates for an attempt at the bucket during the final regular season game against Liberty on Thursday, February 20, 2020, in Ava, Missouri. (Jason Hoekema/Herald)

19-point leads are difficult to come by in most games, counting all four quarters. That, however, was what the Lady Eagles did last Thursday in the first quarter of a game which ended with a 27-point deficit, 70-43.

Eden Little led the Lady Bears in the first eight minutes with three points. A bucket then one of two from the line on a foul drawn from Kaitlyn King. Claire Fossett was able to get inside for one shot, but Liberty’s full-court pressure and constant trapping had Ava giving up turnovers.

Adding salt to the first quarter wound, the Lady Bears had the potential to be near or possibly ahead of the Lady Eagles. The ball was a brick on threes and even long twos with rebounds going to Liberty, who owned the inside on both ends of the court.

Coach Nathan Houk took his first timeout, a half, to try and get the team settled.

Richards was quick at the draw when she got a look from outside, and her shots had a rotation which put the ball in the net… three times in the first quarter. Her last shot from over 30 feet away.

Meanwhile four other teammates from Liberty were getting inside the post taking the quick pass for a bucket, specifically Kaitlyn King with six two-point field goals Thursday.

The Lady Bears upped their game in the second quarter but were still out paced, 16-12, before the break. Olivia Gastineau led the second with four points, backed by three from Evans and Little.

After drawing three fouls in the second, the Lady Bears had nowhere to go as the half closed up, 40-17. 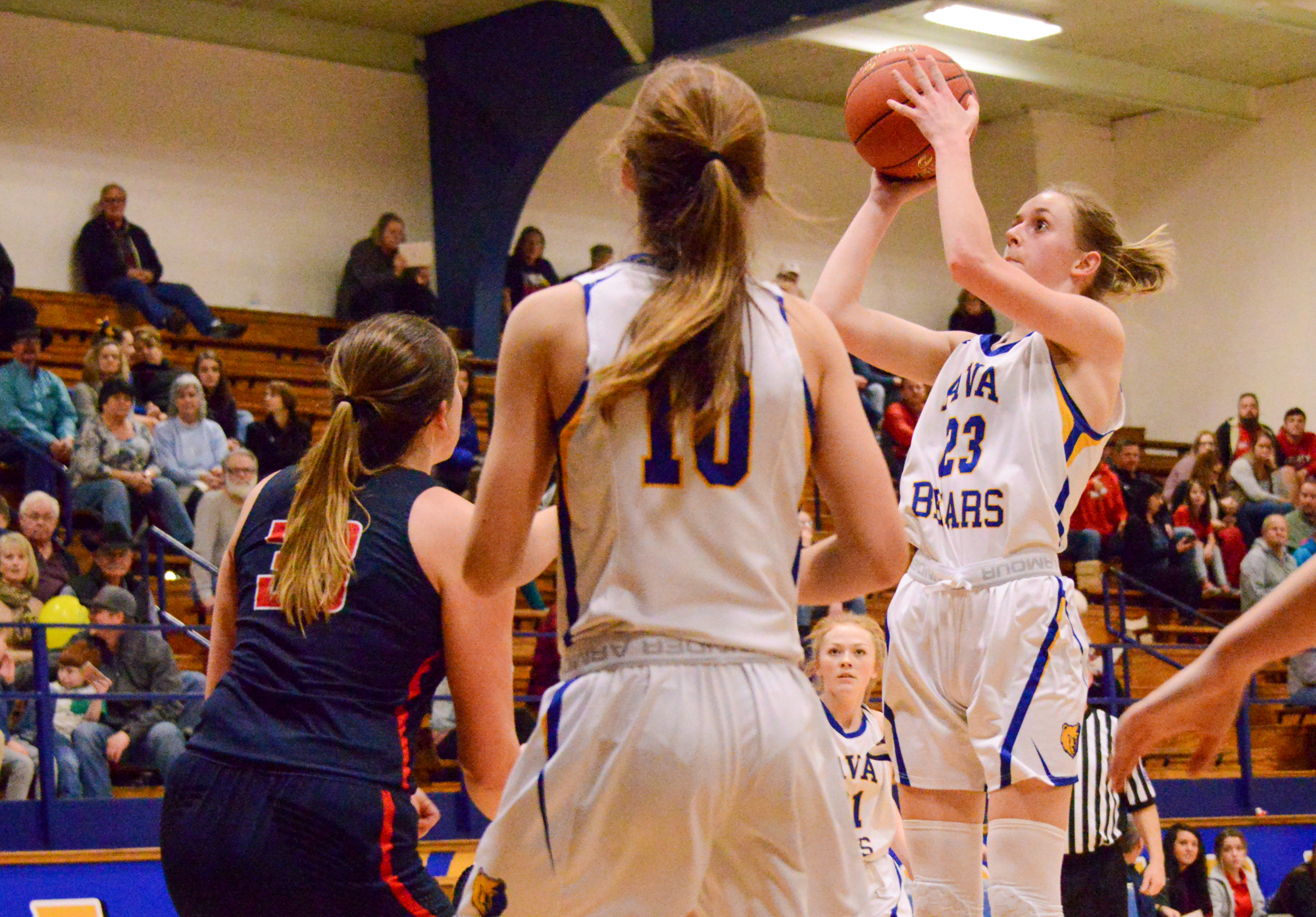 Coming out of the break the Lady Eagles had given up on their full court press and turned to beating Ava in the transition, locking the Lady Bears out and limiting them to 11 points.

Evans came up with six, but the only other buckets came from Little and Lexie Gastineau – who broke free for a solo bucket on the other end.

The Lady Eagles, however, did not relent in the third quarter. Doubling the Lady Bears’ points, Kinley Richards came out and waged a long-distance battle for 11 points, nine from outside.

This brought her game-total up to seven three-point field goals against the Lady Bears. In the first half the Lady Bears were out shot from the arc, 6-0. The only quarter without the Lady Eagles hitting the net for three was the fourth quarter, where junior varsity players came out to get some time on the court.

Kenna Woolsey had hit a three in the second and third quarters, making her one of three lethal shooters the Lady Eagles had in their toolbox.

The Lady Bears took the fourth, but in vain. They outscored the Lady Eagles, 15-8, but in a situation from which there was no recovery.

Coach Houk put in his relievers which included Sara Mendel, who shot for five points and Celia Fossett who nailed one from outside in the fourth, picking up three points.

Olivia Gastineau finally caught a breakaway for two points, later hitting the net with a long three-point shot to close her out with 10 points for the evening.

The Lady Eagles took the Lady Bears’ final game of the season with 70-43 win.

The Lady Bears scored 1,274 points this season for a final record of 16-9 before beginning the District Tournament this past Saturday. A complete article on the Lady Bears’ drive into the post season will be available in next week’s edition.