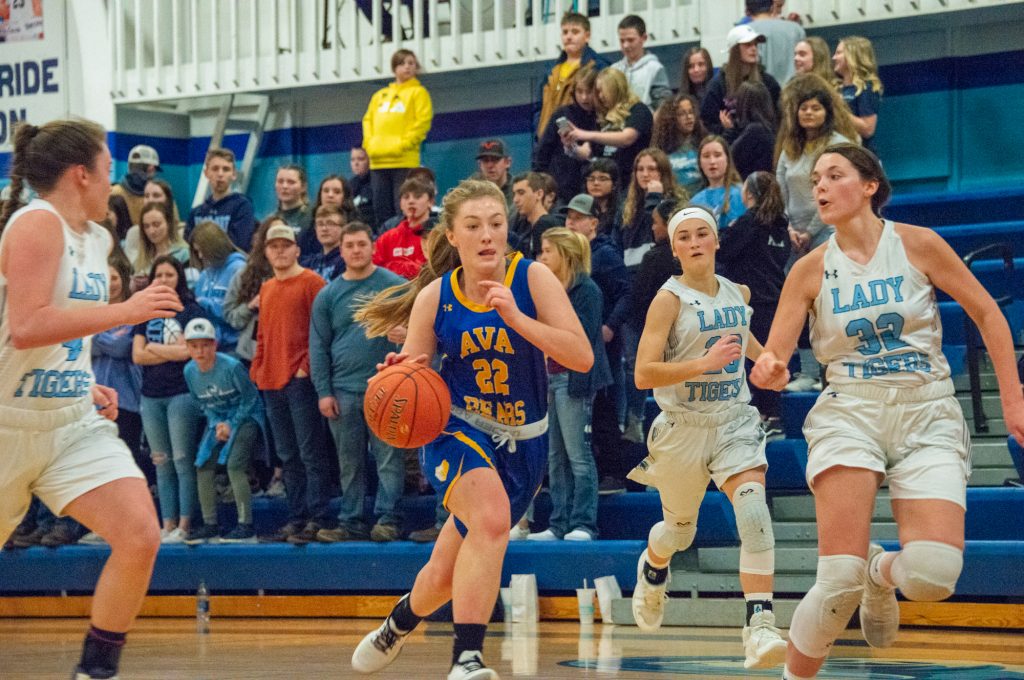 SALEM–It was a back-and-forth game last Thursday in Salem. The Ava High School Lady Bears tied the game, led the game, trailed in the game and ultimately fell, 54-48, to the Salem Lady Tigers.

Walking in on the game one could see the scoreboard racking up the fouls for both teams. As inconsistent as some calls were, it gave both teams ample opportunity at the line.

Aside from the number of fouls called Thursday, the Lady Bears had trouble getting the ball into the hoop. On long shots it acted like a brick and bounced right out into a Salem player’s hands for the defensive rebound.

The Lady Bears defeated themselves with the poor shooting efficiency then the lack of rebounds on the other end. The Salem offense constantly had an eye and arms inside at the time of the shot picking up offensive rebounds and scoring when the Lady Bears should have been boxing out.

“We were 14 of 48 from the field,” said coach Nathan Houk. “If you shoot the ball that poorly from two-point land, and two for 10 from the arc, I mean, it’s hard to beat anybody.”

Salem took the first quarter, 11-7, when Eden Little and Hannah Evans were the only ones to make field goals for five points, Evans with the shot outside.

Claire Fossett drew a foul for two points. She hit two buckets and was perfect from the stripe for a total of nine points.

Hannah Evans came up as the Ava ace in last Thursday’s game with 13 points followed by Lexie Gastineau with 10 from performances in the second quarter and through the second half.

The basketball was acting like a brick on missed shots and airballs were a rare occurrence which came out about last Thursday.

The Lady Bears dropped three quarters, surging in the second with success and 16 points.

Lexie Gastineau picked up the offensive rebound for two, then picked a steal for another bucket totaling six points before the break.

The freshman outscored Evans who had one bucket plus two free throws in the second. Instead Evans was the weapon of choice in the third quarter where she put up six points.

One of the issues affecting the Lady Bears was shooting bricks. The balls would hit and bounce right into the defense which scored several buckets in transition.

Bella Jadwin put Salem on her back last Thursday, leading the Lady Tigers with 20 points with seven buckets and six free throws.

“First half, we didn’t guard well enough,” said Houk. “We gave them too many chances at the basket. The second half they didn’t do that, but they made enough free throws to keep the lead. It put a lot of pressure on us on both ends of the floor.”

Majority of the Salem team shot below .500 at the stripe. The less than optimal shooting was made up by attempts afforded to them by the Ava defense. A total of 15 trips came out of touch fouls and botched swatting attempts.

Without an answer for Jadwin in the second half and ten of Salem’s 16 fourth quarter points made from free throws, the Lady Bears let the game slip away after tying, leading, trailing and then all over again.

This brings the Lady Bears’ record down a notch to 13-6 while the team continues their streak of road games. The Lady Bears won’t return to the home gymnasium until February 18th when they host Seymour, then Liberty on the 20th.

“I think Lexie (Gasinteau) let us in field-goal percentage,”” said Houk. “Everybody else made two or three baskets, two for 10 or two for 14… You just you can’t beat anybody.  We’ve got to be rebounding and guarding better. We didn’t do a very good job of that.”