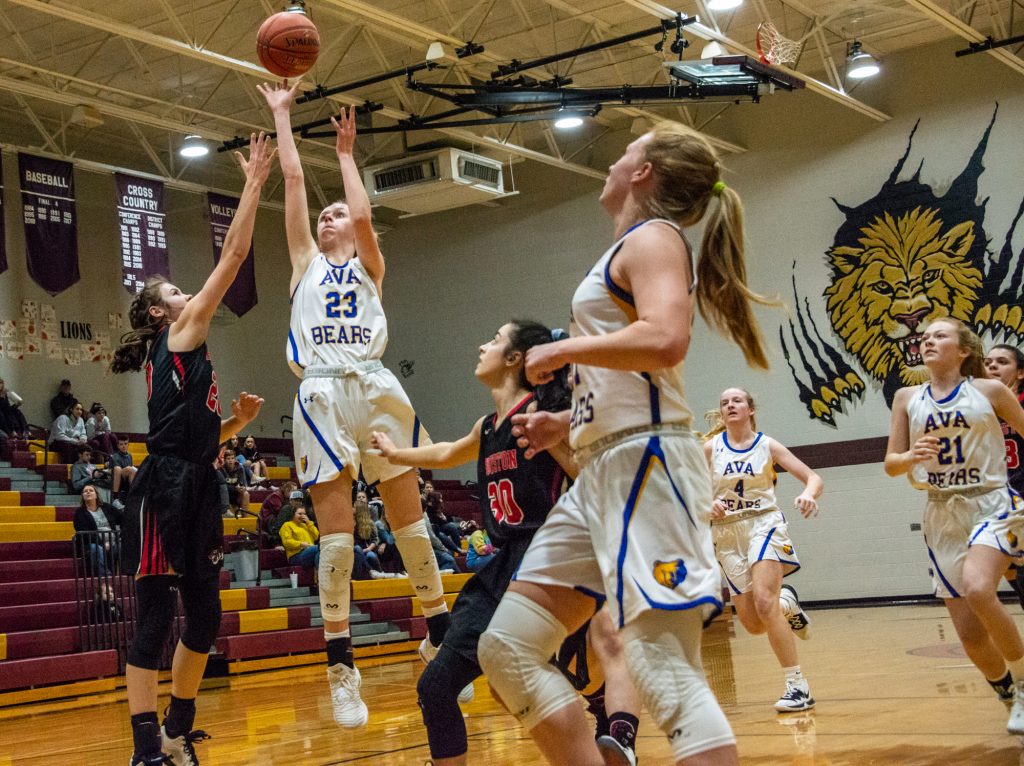 Ava High School sophomore Hanna Evans (23) elevates for a shot at the bucket during a first round game against Houston at the 30th Annual Lady Lion Invitational on Tuesday, January 28, 2020, in Mansfield, Missouri. (Jason Hoekema/Herald)

MANSFIELD – With it being the third non-district tournament of the season, the Ava Lady Bears have already hit a .667 winning percentage with two titles under their belt.

The first came in mid-December with wins over New Covenant, Stoutland and Billings to win the 2019 Lady Warrior Classic.

Then came wins over Bakersfield, Norwood and Eminence at the annual Cabool Classic Tournament – where the Lady Bears came home with their second consecutive title.

Now, the Lady Bears’ resolve will be tested following their, 63-49, win over the Houston Lady Tigers in the first round of play at the 30th Annual Lady Lion Invitational just to our north in Wright County.

Ava entered the tournament at 10-4 – with the win over Houston they are 11-4 – and immediately faced a barrage of three pointers from the Houston offense. In total the Lady Tigers hit ten from outside, out gunning the Lady Bears at the arc.

“They made way too many threes on us,” said coach Nathan Houk. “We talked about that at practice yesterday, about them and their ability to shoot. It just took us a while to get the adjustment through our head and what we needed to do to stop that.”

With this in mind the Lady Bears needed to own the paint for 32 minutes. They did, hitting the bucket 25 times Tuesday evening.

Both teams hit the court with fresh legs and Houston took advantage of it with three shots from downtown, two from starter Hanna Dzurick and the third from Katie Chipps.

Between the two they hit the net five times throughout the game. Chipps came back out of the break and lobbed two more in the third.

But those two only made up half of the long shots.

Jaden Steel went to the net for 24 game points with… wait for it… five three-point shots of her own. At 30 points the Houston offense hoped it would be enough to climb over Ava’s abilities inside.

Four Ava shooters came up with ten or more points in Tuesday’s game with Hannah Evans leading the squad with 16 and Olivia Gastineau with 15 on top of 11 from Claire Fossett and ten by Eden Little.

With a total of 25 buckets inside the Ava offense overwhelmed Houston’s sharp shooting. The Lady Bears didn’t hit their season high six three-point shots in a single game, but Olivia Gastineau put them halfway there with three from the arc.

“Hand it to them,” said Houk. “They shot it really well. Luckily for us, we were able to do some things inside that allowed us to outscore them in the paint.”

The first quarter was commanded by Evans and Gastineau, who tied a knot at six before the Lady Bears went on an 18-3 run to win the first, 19-11. Gastineau hit the net from afar twice in the first eventually putting Ava ahead 13-9. Evans came up with four buckets, one on the offensive rebound and another in transition to take the girls’ lead even further at 17-9.

Add a bucket from Lexie Gastineau and the Lady Bears had the nine-point lead.

Houston woke up a bit in the second thanks to Stell who hit the net thrice from downtown and in a row to push the Lady Tigers up to 17, then 20, and 23 points as the two teams swapped strikes at the rim.

Olivia Gastineau hit a third three-point shot in the second along with one more by Emaly Keyes, who scored seven in Tuesday’s game. With a 16-14 second quarter the Lady Bears retired to the locker room for halftime with a ten-point, 35-25, lead.

Houston may very well be a second half team as they improved through the second and tied the Lady Bears at 18 points in the third.

The big variable in Houston’s success was the quadruple three-pointers made by Steel and Chipps for 12 points as the Lady Tigers attempted to run the game’s pace.

“They went to their delay game to run some clock and get into a set,” said Houk. “So, we switched to the zone (defense) a couple of times.”

The other six came from free throws by Olivia Crites, and twos – one three-point play – from Stell.

The third quarter surge appeared to take the fumes out of the Houston gas tank as they only scored six in the fourth quarter. On the other end the Lady Bears put the ball in five times to end the game, 63-49.

Evans led with 16 points, Gastineau with 15, Fossett with 11, Little with ten, and Keyes with seven. Also contributing to the final score was Baylan Alexander and Lexie Gastineau with two points each.

The unsung hero of the game was Eden Little with steals and deflections which resulted in points in transition. She also put in the work on offense for ten points.

Fouls were relatively low in number and in the three trips to the line the Lady Bears only made one point, shooting a .250 which gave them a slight drop from .626 to .624 at the stripe this season.

The Lady Bears move toward the championship game, but one big obstacle lies in their way.

“It’s going to be a tough game,” said Houk. “They play really hard. They’re a good ball club, one of the best ball clubs we played this year.”

The last time the two met was on January 7th, where the Lady Panthers handed Ava a 47-43 loss. The Lady Bears gave up 16 points at the stripe over a total of 22 fouls. Forsyth shot at a .640, lessening the 25 free throw point potential.

In the paint the Lady Bears trailed by just two buckets and their problem player was Emily Shipman who shot for 22 points.

One thing stood out on paper from that game. Fouls. Had Shipman been contained and drew fewer fouls, Ava could have taken the game.

Against Mountain Grove the Forsyth Lady Panthers top scorers were Calley Matthews (17 pts) and Kaylee Henning (15 points). Henning was a leading scorer against Ava, but the Lady Bears need to watch out for height in Scarlet Texeria and Calley Matthews’ point potential.

“We’re looking forward to the rematch,” said Houk. “Hopefully we can make the right adjustments and come away with a win, but it’s going to be a tough game.” 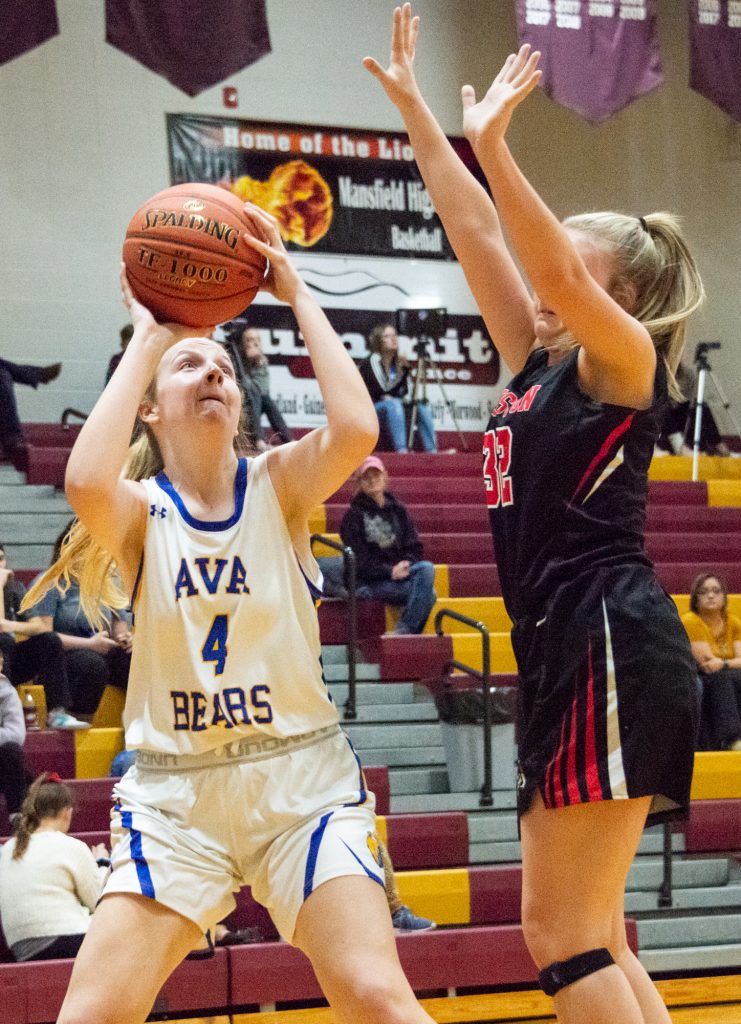 Ava High School senior Baylan Alexander (4) eyes the net during a shot attempt inside the post during a first round game against Houston at the 30th Annual Lady Lion Invitational on Tuesday, January 28, 2020, in Mansfield, Missouri. (Jason Hoekema/Herald) 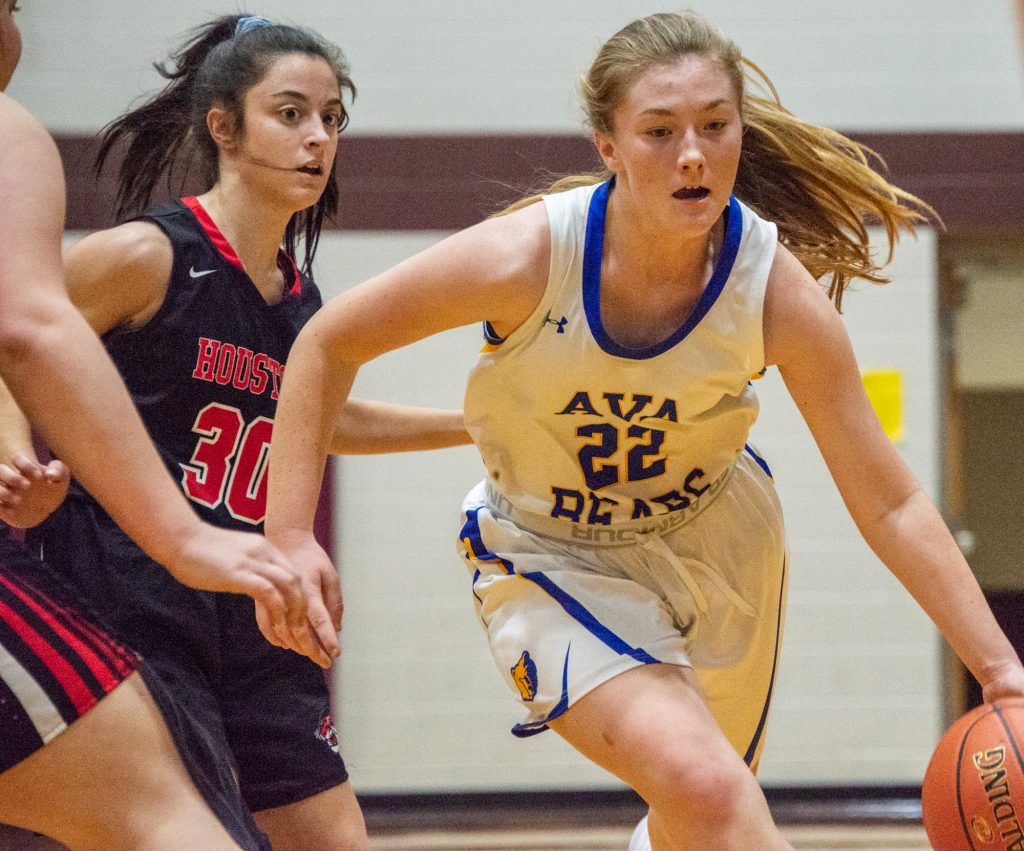