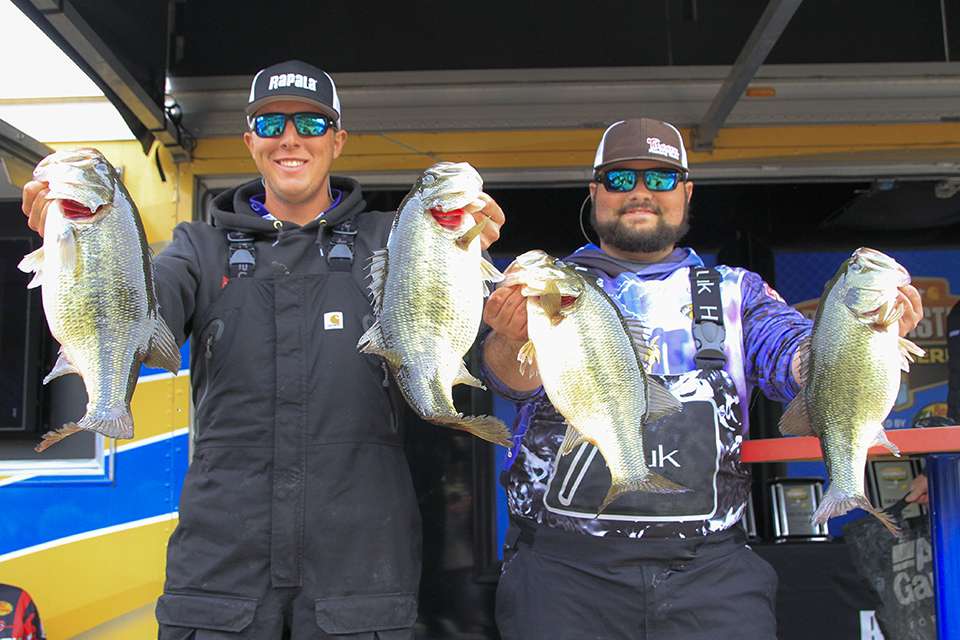 MANY, La. — Cody Huff and Dakota Pierce finished what they started and clinched a wire-to-wire victory on Saturday in the Carhartt Bassmaster College Series at Toledo Bend presented by Bass Pro Shops.

The duo from Tennessee’s Bethel University bagged another five-bass limit, weighing a tournament-high 20 pounds, 15 ounces. That gave them a three-day total of 60-7 and sealed a convincing victory at this famed 185,000-acre reservoir on the Louisiana/Texas border.

Huff and Pierce earned more than $3,000 for the Bethel bass fishing team with the win. They also earned a spot in the College Series National Championship, which is scheduled for later this year at a date and location to be determined.

“This is awesome,” Pierce said, still clutching his tournament title trophy. “We went out there and worked our butts off all week to do it. It wasn’t easy.”

They made it look easy, though, after grabbing the lead with a 19-11 limit on Thursday and following with a 19-13 bag a day later. That gave them nearly a 4-pound cushion over the 11 other teams that survived Friday’s cut. Their final margin of victory was an impressive 6-7.

There were no giants among the 15 bass Huff and Pierce weighed this week. Instead, they relied on a steady stream of 3 1/2- to 4 1/2 -pound largemouth.

“(We’ll take those) any day of the week, any week of the year,” Huff said.

The Bethel duo targeted larger ditches and channel swings where baitfish were concentrated all week. Their best bites came during the afternoons in 20 to 60 feet of water.

“We caught them on jigging spoons,” Pierce said. “There wasn’t much to it, we just had to get it down there quick. Those fish are always moving and following shad. All we had to do was get it in front of their face.”

The win continues a tremendous run for Huff, who now has led on six consecutive days in Bassmaster tournaments. He previously won all three of his matches in the Bassmaster College Series Classic Bracket event on Tennessee’s Watts Bar Lake last August, and that qualified him for the 2020 Academy Sports + Outdoors Bassmaster Classic presented by Huk which will take place March 6-8 on Alabama’s Lake Guntersville.

Huff said it wasn’t difficult to maintain focus at Toledo Bend, despite the fact he’ll compete in the biggest bass tournament in the world in six weeks.

“Everything’s just one week at a time right now,” he said. “I’m just going fishing and enjoying the year while it’s here.”

Huff and Pierce are both 22-year-old seniors, and they grew up together in Ava, Mo., which is five hours from McKenzie, Tenn., where Bethel is located. They credited the program’s culture of success and said they’ve become better anglers since enrolling at the school

“It’s cool to be around a bunch of guys who know what they’re doing,” Pierce said.

Brett Clark and Cody Ross of East Texas Baptist placed second with 54-0, and the Kent State duo of Tanner Ward and Rory Franks were third with 53-12.

In all, 248 teams from 26 states entered the tournament, and the Top 12 tandems split a total purse of $10,625 for their school fishing teams. The top 25 pairs in the standings advanced to nationals.

Stevie Mills and Baylor Howell of Bethel won the $500 Carhartt Big Bass Award for the 7-8 largemouth they caught on Thursday. Huff and Pierce won the Bass Pro Shops/Nitro Boats Big Bag Award and the $250 in merchandise that goes with it for having the biggest bag of the tournament (the 20-15 limit on Saturday.)