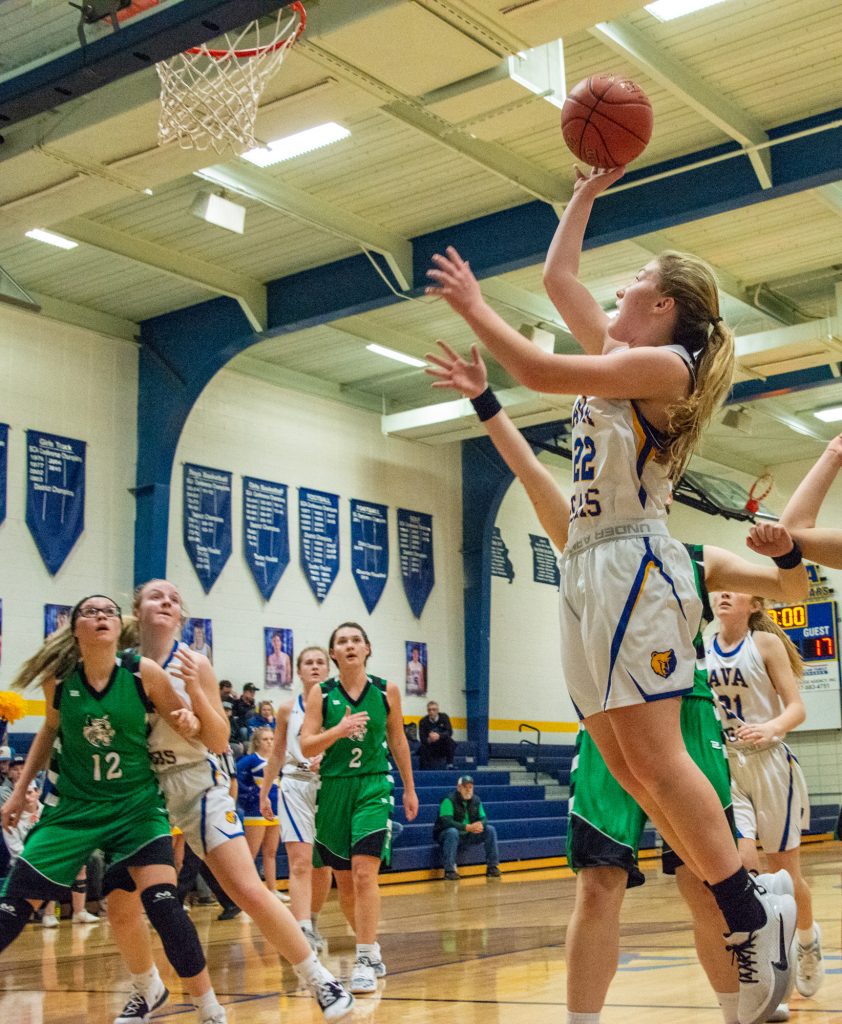 The Lady Bears hosted the Thayer Lady Bobcats Thursday and put on a spectacle, dropping the game by inches, 49-46.

Thayer girls’ basketball is a state-ranked team. Keep that in mind. Ava is not, and was inches off from tying the game at the horn. Literally.

One of the big issues hurting the Lady Bears on Thursday was Thayer’s ability to hit the net from way out. The Lady Bobcats were able to sink nine long shots, five in the first half and another four in the second.

Players like Maddy Kerley didn’t require second thought and were able to fire-off the ball with what appeared to be pinpoint accuracy. No steel, all net.

Kerley hit the three thrice on Thursday along with Katie Wade. In addition to two more from Avery Pierce and one each from Shelby Coursey it was raining bombs in the Ava gymnasium.

Needless to say, the Lady Bobcats were lethal from outside.

Even with multiple shooting aces raining threes down on the Lady Bears the girls’ team was able to outshoot Thayer from inside with 14 buckets over Thayer’s 11.

From the stripe the Lady Bears opened shooting at .250 in the first quarter and .500 in the second. With a couple more charity points early, the Lady Bears may have had a chance to create an upset.

The game tone was set from the first shot, a three-pointer by Katie Wade. Little did anyone know, that was the precursor to what the Lady Bears had to deal with for 32 minutes.

The Lady Bears were able to catch up and overrun Thayer thanks to a two pointer from Olivia Gastineau in the first. In an unusual twist of events, the freshman led in scoring with a total of 14 points.

The Lady Bears defense wasn’t able to hold on, though. The Lady Bobcats rallied for a run of seven, capped off by a three from the young lady who started the three-point trouble.

On the other end the Lady Bears weren’t hitting the bucket from afar as they did against Mountain Grove where they hit six. Again, Ava was up against a state-ranked team.

Turning to the paint for buckets and charity, the Lady Bears picked up 40 points from shots taken in the lane. Olivia Gastineau had her best night with a career-high 14 points.

Only two were gifted, too.

Gastineau was able to move through rush-hour traffic and create difficult shots to keep Ava afloat. In the second quarter she brought the Lady Bears back within striking distance twice, her third bucket bringing Ava to 20 points and behind Thayer by just three.

Given the pressure into the lane created by the Freshman, she only drew one shooting foul. She hit the one-and-one in the fourth quarter as the two teams duked it out on the Maple for the lead.

Hannah Evans put in the work for 11 points Thursday, picking up an important offensive rebound against a taller Thayer post player. She went right back up with it for two points. She drew two shooting fouls and was perfect from the line, as was Gastineau.

The game tempo ebbed and flowed like the tides. The Lady Bears were constantly reminded in the second half to slow it down and force Thayer to play at a pace set by the Ava team.

Some critical shots were missed, perhaps from shooting a second too early of missing the opportunity while facing the Thayer defense.

After the 15-11 first the Lady Bears shored things up a bit and kept the second to 10-9. This was where Gastineau hit three buckets while Claire Fossett warmed up and started hitting free throws after leaving an open frame in the first.

The unsung hero of the game was Baylan Alexander, who created a lead in the third quarter. Right after that bucket, the Lady Bears went on a 7-point run after catching up on a six-point sprint earlier in the third.

With Ava capturing the momentum after keeping Thayer stuck at 25 points, they erased their deficit and went up by five before a three-pointer hit hard from Shelby Coursey.

From there the Lady Bobcats rallied to erase the five-point lead and tied the game at 33 at the end of the third.

Wade hit her third three-pointer of the game to open the fourth. Ava had a short sprint of four thanks to a pair of free throws made by Fossett and a long two from Freshman Lexie Gastineau who hit the net with an off-balance shot.

Fouls racked up and the game started to toe the line. Thayer shot a .500 from the line earning just four points on fouls drawn from the Lady Bears.

On the other hand, Olivia Gastineau kept the hope alive with the one-and-one right before Emaly Keyes hit a big-time three pointer which went through with a clean swish.

Unfortunately for the Lady Bears, Kerley chimed in with her third three-pointer which was followed by a cross-court breakaway to Wade for an uncontested bucket.

Houk burned three timeouts in the fourth to come up with offensive schemes and give the players rest. Evans, Gastineau, Fossett, and Little each playing four quarters each.

The Lady Bears were two shy of a tie, but a foul drawn from Lexie Gastineau allowed Pierce to get one bucket, opening the lead to three.

The Lady Bears got the last possession of the game. As the seconds burned off the ball made its rounds as the Lady Bears tried to open Evans for a clean shot. Under pressure and well-defended, she took it which nearly forced an overtime situation. 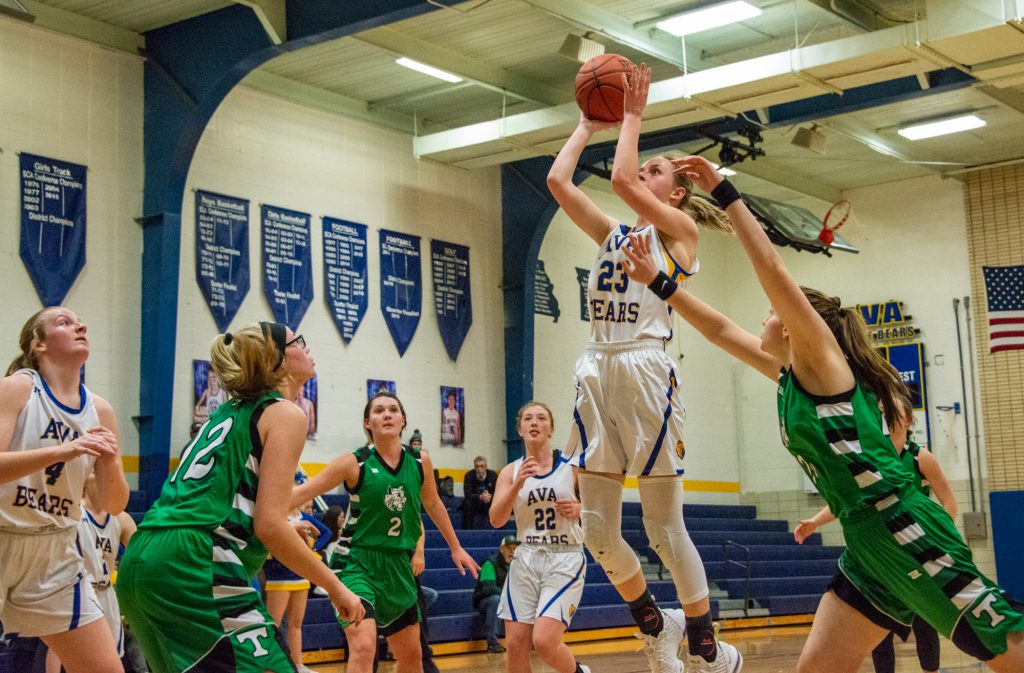 Ava High School sophomore Hanna Evans (23) elevates for an attempt at the bucket during a game against Thayer on Thursday, January 16, 2020, in Ava, Missouri. (Jason Hoekema/Herald) 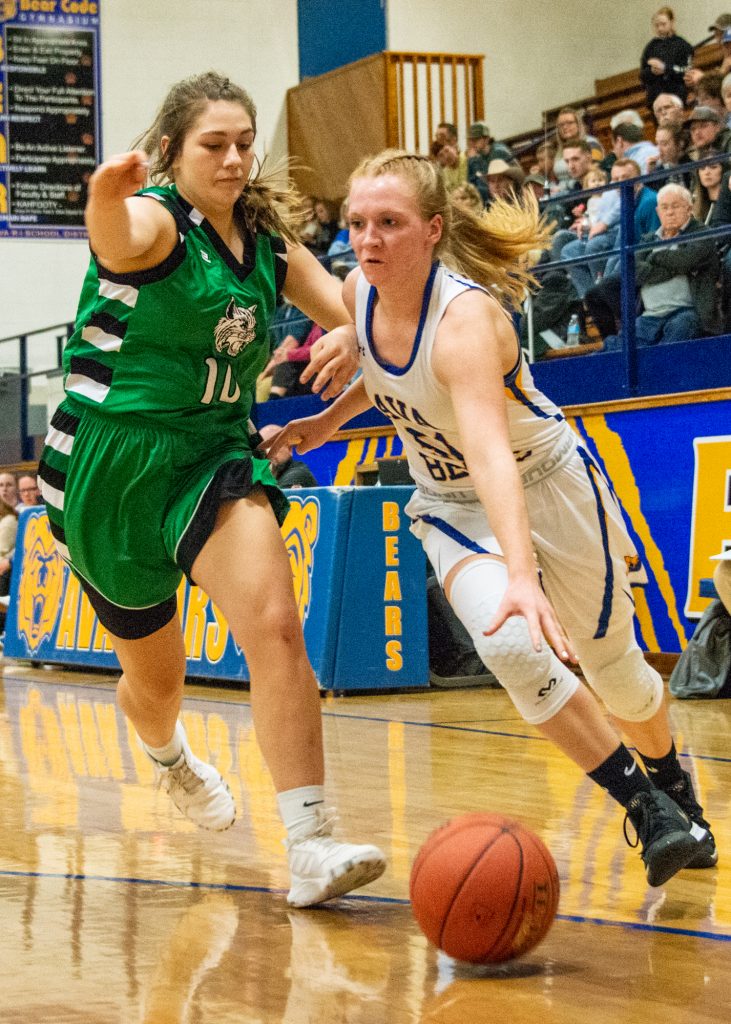