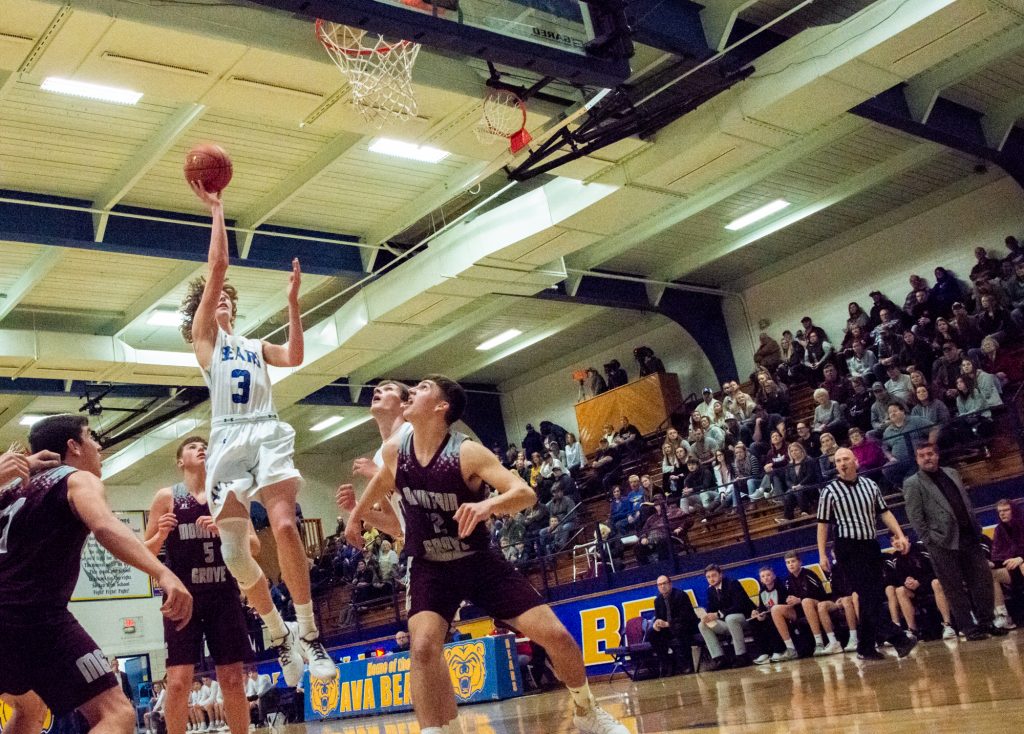 The Ava Bears had a big win on Friday, ending a nine-loss streak held since 2013 against the Mountain Grove Panthers with a 77-48 win on the home maple.

Ava and Mountain Grove are deep-seated rivals and when the two schools meet things can get… Heated. Even during the schools’ meeting in the football season there was plenty of heart in the game.

Mountain Grove is in a rebuilding process, after graduating a significant number of seniors this past summer. That, however, didn’t stop them from coming out of the gate and keeping pace in the 18-17 first quarter.

The tip off went to the Panthers, who took the rock down to the court and attempted to strike first. Jacob Gillies posted in the restricted zone and took the charge from Hollen Glenn for the turnover and it was Gillies who took the ball and put it in for the game-opening bucket.

From there the Bears went to work with Nate Swofford doing what he does, making shots out of thin air. He put up five with one from the arc and made the assist to Andrew Dalton who took it up for his first bucket of the game with the and-one as a cherry on top.

The Bears did fall behind a point after their opening sprint of four was cut by the Panthers where they took a 5-4 lead thanks to a three from Tyson Elliott.

The Bears wasted no time in catching up with a run of seven from the three by Swofford and a steal plus two by Dalton.

Ten is a Team

Friday night set a precedence for the Ava Bears after they put up their 77 points thanks to contributions from ten team members.

Some of those numbers led to a 22-point explosion in the second quarter. Blake King hit the net twice from downtown while Swofford and Donley followed suit with one long-ball each. Those shots rang for 12 points while Zach and Blayne Mendel and Bruce each chipped in a bucket as Dalton swept up with on offensive rebound for two.

The teamwork pushed Ava ahead by 11 at the break after a marathon of 11 unanswered points were capped off by Blake King who pulled the and-one for the four-point play.

Ten also happens to be the number of three-point shots made by the Bears this past Friday. Blake King made three, Swofford two, Blayne Mendel one, and sharpshooter Quinton Donley hit three – two were back-to-back scoring shots for the Bears in the fourth quarter.

Dalton found himself in a position of opportunity near the corner where he also fired one off in the third quarter.

The idyllic shooting by the Ava bench overcame the eight threes made by Mountain Grove.

Coach Seiger once said that if teams are going to beat the Bears, they would have to get beat from outside.

This means the Bears continue with their aggressive full-court pressure while working coverage inside to cut off the lane.

In total the Panthers only hit 11 buckets, six from Jase Dowden. Whether it be the whistle or a disciplined Ava defense, the Bears only gave up eight fouls on Friday.

In four trips to the stripe by the Panthers, the team shot a .286 from the line and only garnered two points from fouls called on Blayne Mendel, Donley, and King. Another shortcoming which cost the Panthers.

On the other end of the court the Bears were treated to just seven fouls drawn from the Panthers. Four trips to the line cost Mountain Grove five points as the Bears shot .833 from the stripe.

Dalton and Blake King were perfect on free throws, making four points. The fifth was the and-one Dalton drew from Gavin Charlton in the first quarter.

After the Bears came up with a 22-12 second quarter for the 11-point lead at the break, they did not let up on either end of the court with shots on offense and traps on defense.

The Panthers had ample opportunity on defensive rebounds and steals, but failed to put the rock through the steel. In the Third the Bears continued their offensive attack with 19 points over Mountain Grove’s ten.

In the book it appeared that the rival’s offense was letting up faced by immense pressure from the Ava defense.

In the fourth quarter as the JV players took to the court for some Varsity experience, the Bears managed to pull together an 18-9 fourth quarter to all but seal the win for Ava.

Payton Evans hit the bucket as varsity players transitioned to the bench. Kayden Myers also got the pass inside for two in the fourth. It was in the final minutes of the game in which Donley hit his back-to-back threes, bringing him 17 this season leading the Bears.

Blake King seconds Donley with 14 long shots this season and right with Nate Swofford in total points, both with more than 110 each. 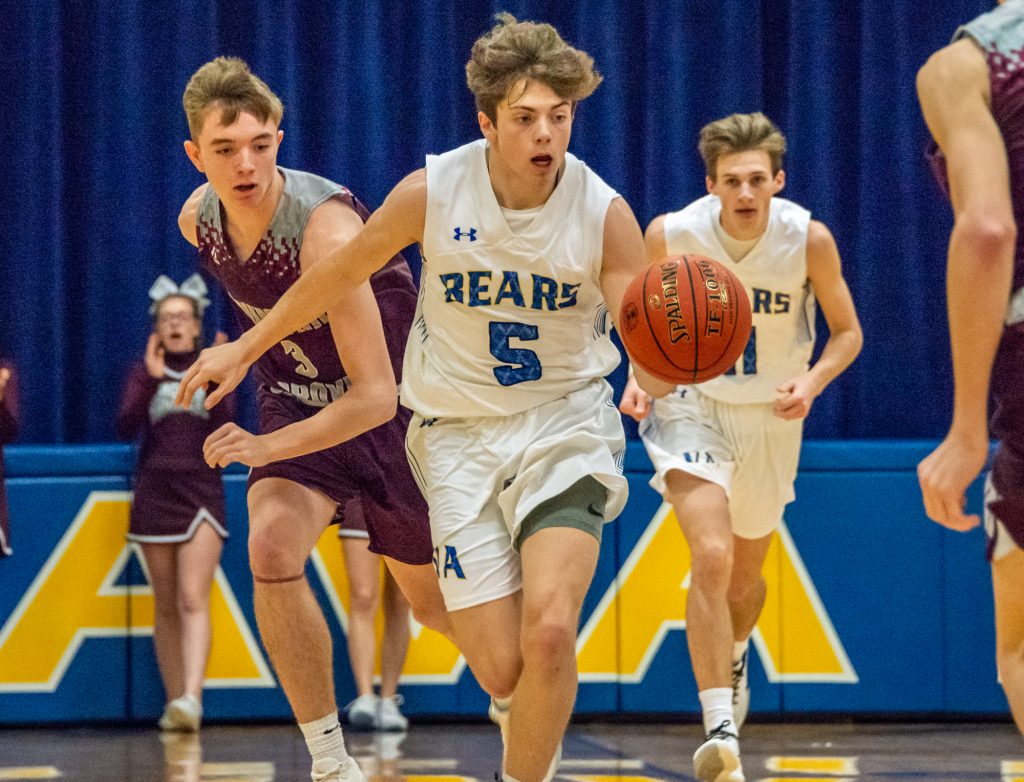 Ava High School senior Nate Swofford (5) dribbles the ball down the court as the Bears transition to offense during an SCA Conference game Friday, Jaunary 17, 2020, in Ava, Missouri. The Bears handed the Panther their first loss since 2013, ending a nine-win streak with their 77-48 victory. (Jason Hoekema/Hearld) 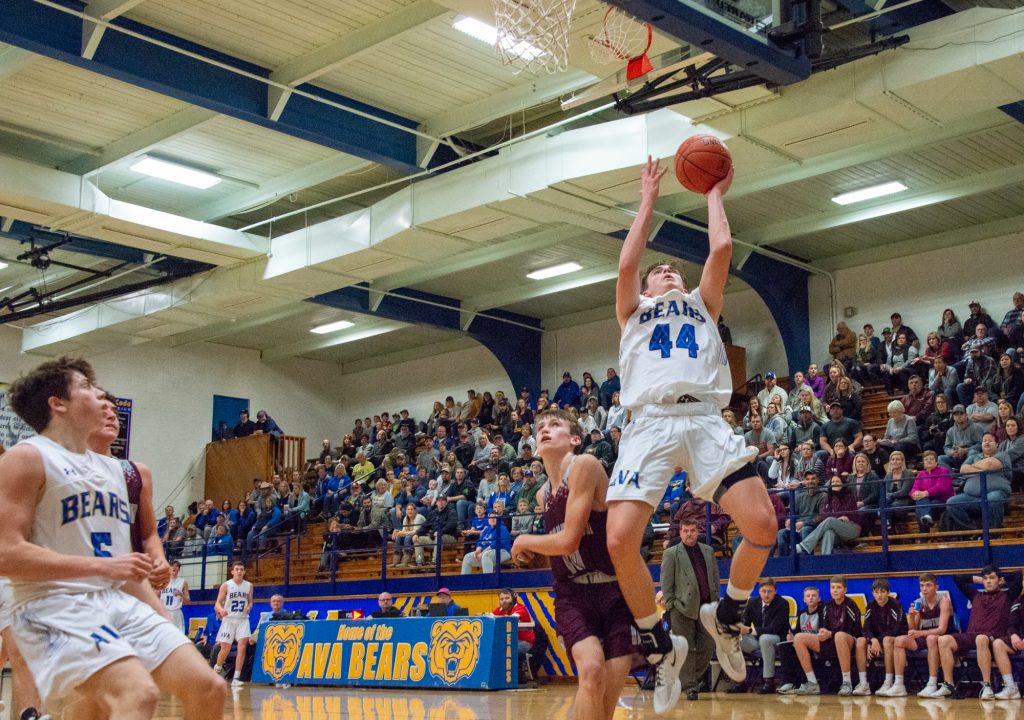 Ava High School sophomore Andrew Dalton (44) elevates for a shot at the bucket during an SCA Conference game against Mountain Grove on Friday, January 17, 2020. (Jason Hoekema/Herald)