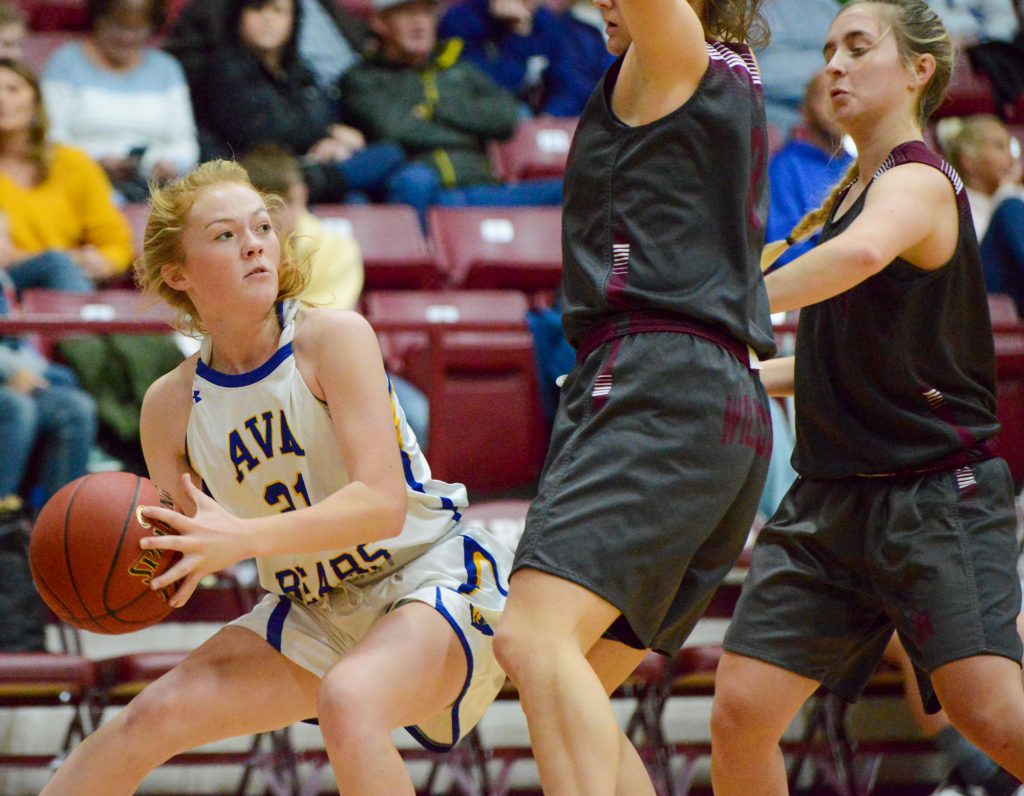 ROGERSVILLE – It was a sting to hear that Julia Henry was out for the remainder of the softball season. It was salt in the wound knowing she wouldn’t be playing the post with her height this year on the basketball team. Next year is going to be quite the comeback, but first the Lady Bears must deal with a couple more setbacks on the bench this year.

As of Friday, sophomores Lauren Hall and Hallie Smith were not returning to the bench for the 2019-2020 season. Both underclassmen were anticipated to take part in this new season.

Reason(s) for the departures are unknown, but coach Houk did confirm they participated in at least one practice before departing.

The Lady Bears hit the road as drizzle fell – temperatures with it – to participate in the Logan-Rogersville High School Jamboree.

This year head coach Nathan Houk wanted a warmup to the season opener against Hollister. With the young blood on the team including the addition of four freshman, he was trying to take out the surprise of real game time on the court for them. 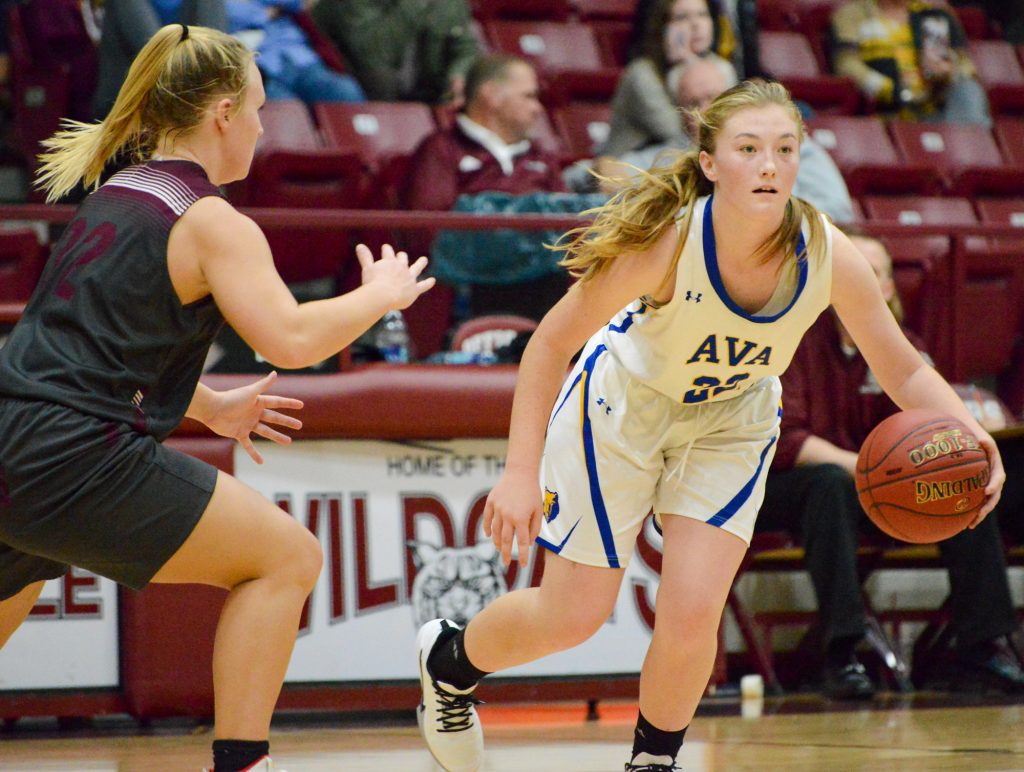 The Lady Bears’ first bout was against SCA rival the Thayer Lady Bobcats. Ava took a 60-28 loss on January 10th during last season. This time around showed some promise as Thayer had lost some height and talent over the summer.

Emaly Keyes put up a sharp three from the right wing early in the first abbreviated half. Little followed up drawing a foul for one more point as the Lady Bears pulled away from the Lady Bobcats.

Thayer was able to shore up their offense and pull within one for Ava at the end of the first bout which ended 8-7 for the Lady Bears.

The second six-minute match was a near no-show for Thayer who were left behind, 10-3.

“(Thayer) is going be a good team,” said Houk. “It’ll be hard to handle them as the season progresses, but we’re better than we were last year as well. I was pleased with the way we played against them and the things that we did. I felt we had made some improvements and some players have gotten better than last year. The younger kids are going to come on up to help us with that.”

In that bout Little worked the paint for four points. Freshman Lexie Gastineau picked up a steal on the far end which she brought back for a layup.

As for the missing variable in the post, Keeley Akers was able to put up two while subdued by three defenders. It’s still early in the season, but she looked the part on Friday.

“She’s one of our most visible players,” said Houk. “She’s not afraid to get down there and mix it up. She does a good job of using her physicality to hold her ground and she defends well.”

In the 12-minute mixer, the Lady Bears prevailed 18-10 over the Lady Bobcats.

Republic entered the gym after their first-round against Logan-Rogersville (Rogersville for future reference) and matched up in height (for the most part) with the Lady Bears. 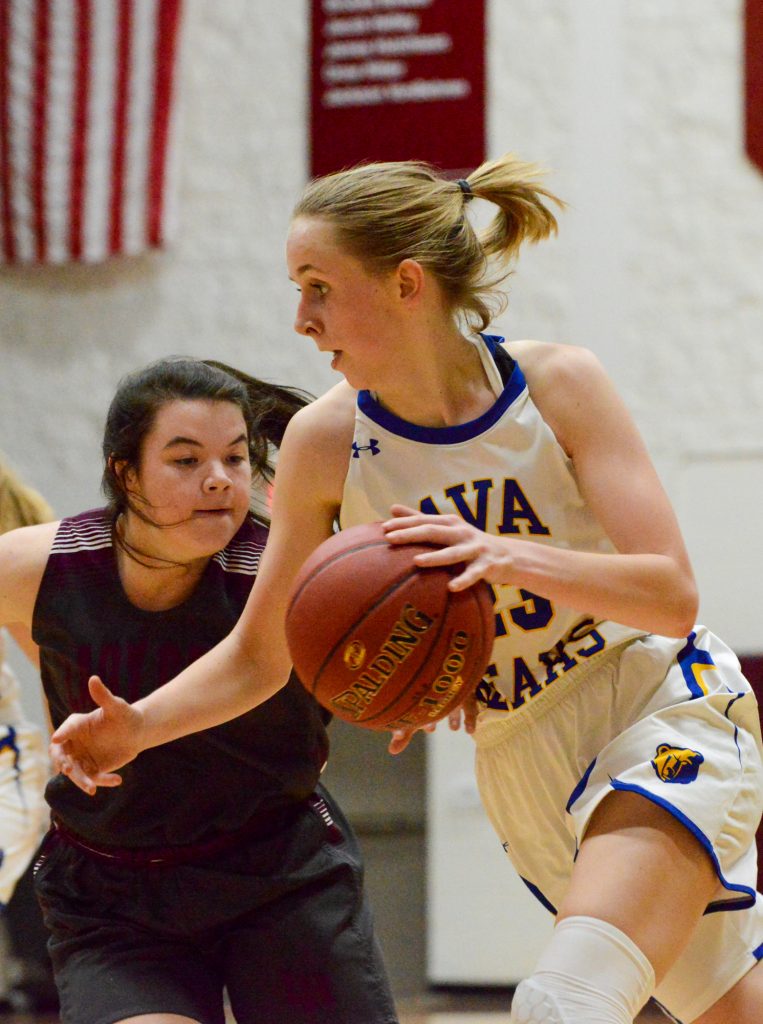 Republic is a new opponent for Ava and comes from a larger Class 5 district. Although the Lady Bears were outshot 26-19 over both abbreviated halves, they were only out gunned by seven points… and it is a positive outcome.

“Republic was by far the most physical team we played here,” said Houk. “I was pleased with how our kids handled their pressure and physicality.”

Baylan Alexander got a steal and put up four total in the pickup game, followed by Little and Olivia Gastineau who each scored two.

In those same 12 minutes, the show belonged to returning sophomore Hannah Evans who put in the work for 11 points against Republic.

Evans brings in a hybrid skill set where she can hit from both on the paint and from the arc. On top of that she was nearly 72-percent from the stripe against all three teams.

With the Lady Tigers out of the way Ava had just the Lady Wildcats to put away before the jamboree ended in an early fashion.

Things ran so smoothly that players and parents were back on Highway 60 before 7 P.M.

Rogersville is now a Class 4 school and won’t compete against Ava in the regular season but getting the team’s feet wet with larger-class campuses was a great start for the season.

Ideally, a larger school class means a larger pool of talent.  Ava brought it to Rogersville to put them away 19-13 in two abbreviated halves in spite of that theory.

The first half was tied at seven, though.

Evans was well-warmed for the third round and put up four in the first six minutes as the two teams figured out offense and defense.

“We probably should have been up at the end,” said Houk. “We had done a couple of things, messed up a couple of times defensively and then missed a couple shots that we normally make.”

In the second half Evans put up seven in six minutes with a three from the wing to push the pencil point into the paper.

Many of the names should be familiar from the Bears’ softball season.

The twins were able to make their own impact to all three games as thieves. Lexie has speed and agility which allowed her to steal and sink the two with little fuss from the defense during the pickup game against Thayer and Rogersville.

Olivia made her contribution as well, sinking two freebies from a foul drawn from Republic.

Against Rogersville, the duo was in the paint, on the perimeter, moving past the block, and everywhere the offense (or defense) needed them to be.

“Both of them are good guards,” said Houk. “(They have) great court awareness, they see the ball well and make good decisions with the basketball. Those are a couple of younger ones to look out for.”

One thing that also stood out was in the rebound department. Several points were lost when the offensive rebound was needed. The same issue arose in all three games on defensive rebounds as well.

A defensive rebound is the first offensive possession. Although it is still VERY early in the season the team will need to figure out who will play forward and, in the post, consistently this year to increase rebound numbers, thus increase the number of point attempts.