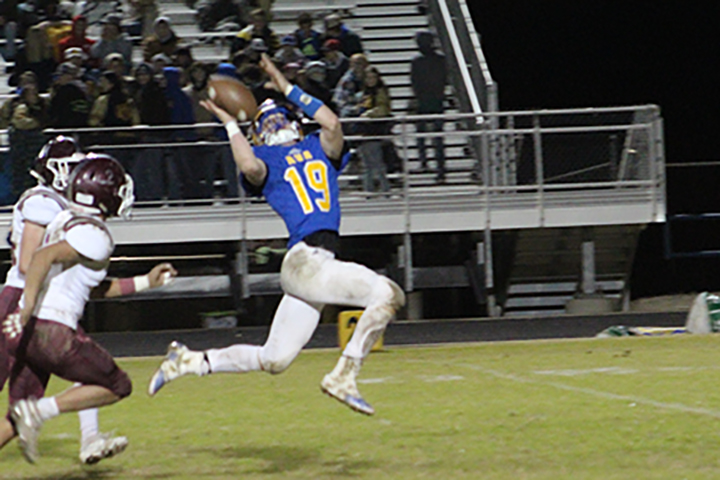 Ava High School receiver Josh Bray (19) makes a pass reception for a touchdown during round one of the MSHSAA Class 2 District 3 District Playoffs on Friday, November 1, 2019, at Silvey Field in Ava. Photo by Kayla Dry/Special to the Herald

The Ava Bears put on a mediocre performance in Week 3 against SCA rival, the Mountain Grove Panthers. The Bears were held to just 20 points in the heated contest on September 13, the second-lowest number of points behind the 12 which led to an overtime victory over the Thayer Bobcats on October 11th.

This last week the Bears tripled the points on the board eliminating the Panthers from the postseason, 60-20, with only 14 minutes and 40 seconds of possession time.

The Bears also set some season highs in the second bout against Mountain Grove. The first time the Bears averaged 3.67 yards per snap, but some preparation raised that number to 15.23 yards per play.

The third big change in the numbers between the two teams was Ava’s improvement in penalty yards where the Bears only gave up 30 hash marks, the second lowest allowed this season.

The Panthers won the toss and deferred, a popular tactic also used by the Bears, and kicked off to Ava who spent just 46 seconds to complete a two-snap 49-yard drive for their first points of the game.

The Panthers squibbed the kickoff in attempt to snag possession away from Ava. However, not one Bear touched the ball which wound up being played by the Panthers before officials figured out a ruling which gave the Bears the ball on the Panther 49.

After one snap Kayden Myers took the handoff from Nate Swofford at the Panther 46 and broke through the center of the defense and broke loose for an early first strike. Swofford carried the ball up through the mess on the line of scrimmage, finding his way past the goal line for an additional two points.

The Panthers answered with a near turnover but pushed the fourth down luck and found the pay dirt with a pass from Tyson Elliot to Jase Dowden for a 43-yard touchdown pass completion. Mountain Grove was snubbed by the Ava defense on the two-point conversion attempt after the Panthers shot themselves in the foot with a holding penalty.

“I thought we did a great job on offense,” said coach Dan Swofford. “We were a little stagnant on defense again, early on. I felt like my kids got better and they started getting some things done. For me, because I’m a defensive guy, we’ve got to get better. We’ve got to do things better than what we’re doing. It’s not that we’re not there, we’re not making plays and we’ve got to.”

Mountain Grove had pulled a few strings with new play ideas to try and take the Ava defense off guard. In Week 3 Rhett Wakefield played the quarterback slot for the Panthers. During last Friday’s playoff game he took the role of a running back as Elliott played the role of QB.

Wakefield took direct snaps while Elliot faded back and played out a bad snap. The masquerade was detected by the Bears who allowed no greater than an eight-yard gain from the trick play.

Ava took a bit longer on their second drive of the first quarter, spending 2:17 on the clock on a five-snap 58-yard drive with two first downs which were good for another six points after Swofford twisted and spun his way through tackles for a 17-yard touchdown rush. Myers trucked the ball in for the extra two.

At the end of the first quarter Ava had scored twice on two possession while the Panthers had struggled to deliver six points over 17 snaps.

Leading 16-6 going into the second quarter, the Ava Bears were still on defense as Mountain Grove had carried possession over on third-and-four. Wakefield rushed for four yards, just barely making the first-down conversion to the Ava four.

The Panthers took four snaps to find the goal line as the Ava defense denied Wakefield the touchdown on four attempts.

During the Panthers’ last possession, they failed to make the two-point conversion. This time around they went ahead with the extra point attempt, going over the Ava defense instead of trying to get through them.

Ava scored on a 3:04 possession over 75 yards to the Panthers’ endzone. An all-rushing offense was led by Myers with a 37-yard rush on first-and-ten, burying a defender with a stiff arm on his way. Ava failed to pick up the 2XP attempt, but their next possession lasted just 48 seconds.

Starting on their own 31, the Panthers only saw 25 positive yards before giving the ball back to the Bears at Ava’s 41.

Two snaps and 59 yards later, Swofford had found the endzone for the team’s third touchdown and a right-side pitch to Spencer Skyles added two to the damage of 22 points in the second quarter.

Mountain Grove delivered a large lead to the Bears thanks in part to a clutch pass interception by Swofford who played the backfield on defense.

The Panthers had a 12th man on the field, giving Ava five free yards to the Panther 49. From there Myers escaped the defense for a 51-yard rushing touchdown followed by Swofford with the extra two.

The Bears spent just over seven minutes to deliver 22 points, leading 38-13 at the break.

On Friday, Kayden Myers rushed for a total 218 yards bringing his total to 1,405 yards this season tallying 22 touchdowns.

The Bears picked up 86 yards with receptions for two touchdowns, both split down the middle between Josh Bray and Skyles.

The third quarter started with Mountain Grove receiving, starting their only scoring drive of the quarter at their own 32. 68 yards over seven snaps was topped off with Dowden picking up a 25-yard pass into the endzone with the PAT for seven points.

“We knew he was the number one receiver and we had our best on him,” said Swofford. “We just missed, but after that we started getting some things done. He just made some plays. He went up and got it and I was very impressed with how he’s doing that. We’ve got to be playmakers, though.”

Now at 20 points totaled, this was the last scoring possession for the Panthers.

Ava on the other hand scored another 22 points in the third over three scoring possessions. The first lasted 1:52, a 51-yard drive over five snaps. Swofford connected with Skyles twice for gains of 27 and 15 yards. The second possession scoring when Skyles found the goal line on first-and-five (thanks to an offsides call on the Panthers).

Nearing the endgame, Ava burned 2:46 off the clock on their second possession, a 46-yard push ending with a right-side pitch to Bray for two yards on second-and-two.

Parts of that drive was accelerated with the momentum from an eight-yard carry by Meyers, who carried half of the Mountain Grove defense with him to the Panthers’ two.

One thing which burned the Panthers was their inability to recognize touchback opportunities. Alex Casas, as fast as he can be, fielded the ball near the Panthers’ goal line twice. Once was a successful return to their own 29, a 24-yard return.

However, the other time where Casas fielded the ball near the goal line resulted in a mere eight-yard return which started a drive ending with a punt to the Ava 43 with 32 seconds left in the quarter.

That final possession of the quarter lasted just 13 seconds with Swofford keeping the ball and breaking away for a 57-yard touchdown. The rush marked a season high for the senior quarterback, both in carries and carries resulting in a touchdown.

Mountain Grove carried possession over to the fourth quarter, starting on their own 29 on first-and-10. Against the Ava junior varsity rotation, the Panthers were kept to nine yards before fourth down.

Mountain Grove managed to convert for the first down thanks to a one-yard reach by Wakefield to the Panther 39.

Even a big play following two fresh sets of downs, a 39-yard reception by Davin Basham surprised Ava and pushed the defense back on their heels to the Bears’ 22.

The Panthers’ tried to make up the yards with pass plays but were foiled by defensive plays like a pass break up by Zach Richards.

From the Ava 19 the Panthers attempted a final stab at the endzone but the ball went through Basham’s hands an onto the grass forcing a turnover on downs.

The Ava JV didn’t do a whole lot with their only possession in the fourth. Richards rushed for nine yards but the offense was held to a punt with 2:16 left on a continually bleeding clock.

Mountain Grove’s first snap occurred with 1:53 left in the game but only made it to the 50-yard line after three snaps. The Panthers allowed the game clock to expire sealing their departure from the playoff picture with a final score of 60-22.

The Bears continue off into the post season at 10-0 and will face the East Newton Patriots (2-8) on Friday.

The Patriots upended the Houston Tigers last Friday, squeaking by 21-20. Houston was favored to win the game with a slightly better record of 4-7 and greater points scored per game.

At this point in the postseason, the Ava Bears will face the winner of a Liberty-Mountain View and Willow Springs contest should they triumph over East Newton.

“We’re going to have to we’re going to toughen up, because if we play like we did tonight, it’ll be it’ll be a long night (against East Newton).”

On the other end of the state quarterfinal bracket remains Fair Grove, Versailles, Lamar, and Warsaw.

Fair Grove is also an undefeated team and will likely top Versailles, but the game between Warsaw and Lamar is too close in PPG/PAPG to call at this time.

If Ava advances past the November 15 competition, they will face either Lamar, Fair Grove or Warsaw on November 23.

This Friday night is MSHSAA controlled. Price is $5 for everyone. Passes will not be honored.