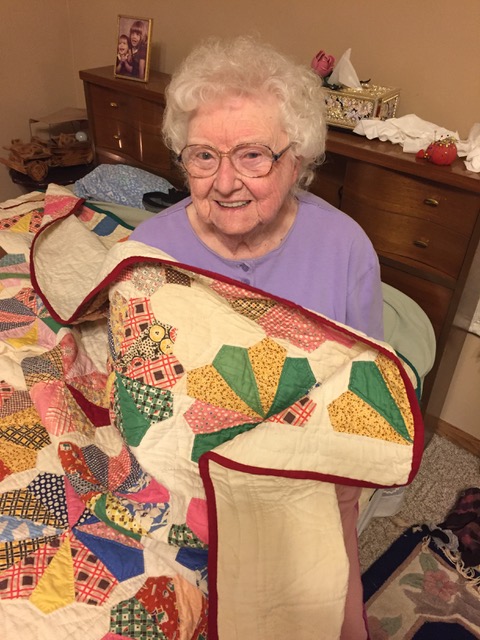 Ozark County native Donna Walker, a 90-something “fabric hound,” pieced her first hand-sewn quilt when she was 10 years old in 1937. Here, she holds a hand-pieced and hand-sewn Dresden plate quilt, one of many handmade quilts in her collection. This one, a family heirloom, is not included in the Historium display.

By Janet Taber, Reprinted with permission of the Ozark County Times

Donna Walker is a self-proclaimed “fabric hound.” When the Ava resident gathered a sampling of her personal collection of quilts to share with the Ozark County Historium for display, it became apparent that her love of the handmade textile creations has been a part of her life for a very long time.

Born in 1927, Donna pieced her first hand-sewn quilt at the tender age of 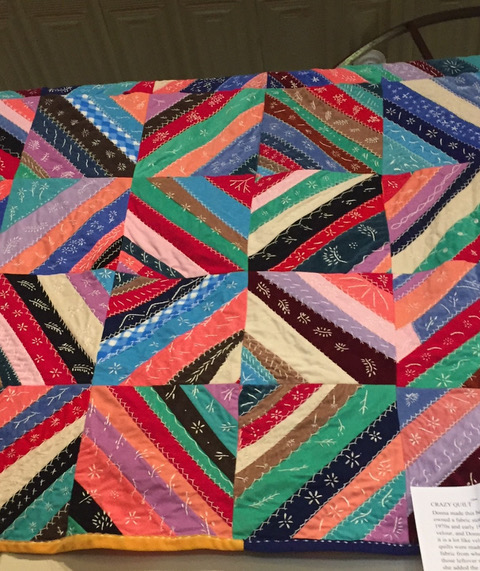 Donna Walker’s crazy quilt is made of velour, which she thought was like velvet, with details added in free-hand embroidery.

10, and she has continued to make, collect, preserve and enjoy quilts for the ensuing 80-plus years. It makes for an assemblage that covers family, friendship, history and trends during those decades – and there is no sign that Donna is going to stop anytime soon!

Now artfully displayed on the Historium’s 16-foot walls, Donna’s quilts include examples from the 1930s and 1940s, as well as newer ones. Some of the patterns are instantly recognizable classics, and some are her own unique creations. Some are created from carefully coordinated fabrics while others came from the scrap basket.

One of the most striking quilts is her first one, made by the hands of a child during the cold winter of 1937.

“We had moved into a little farmhouse not far from the Souder one-room schoolhouse where I went to school,” Donna remembered. “I would come home from school on those cold winter days, and Mama was always working on a quilt. Well, I wanted to do what she did, so she helped me get started making my string-pieced star. The material is all from feedsacks, but I didn’t mind. 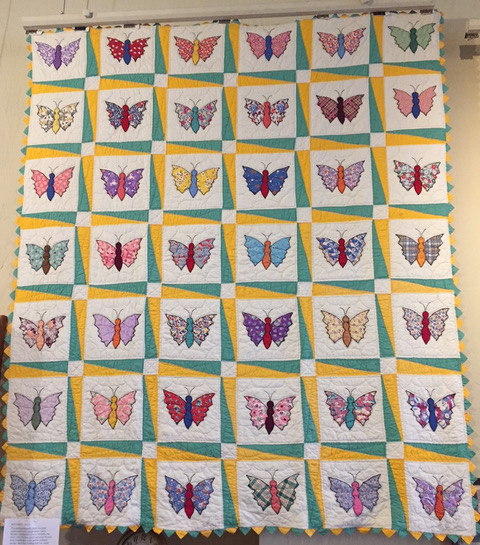 This vintage butterfly pattern is a family quilt from Donna Walker’s grandmother.

continued. “Then we tore pages out of an old Sears and Roebuck catalog and cut diamond shapes for foundation pieces. I then sewed random strips of materials across the diamonds. When I had four diamonds covered with fabric, I trimmed them and sewed them together, making half a block. And when I had two halves made, I sewed them together for the star. Mama helped me sew the stars together using big squares in between, and when the top was all finished, we tacked it. And that was my first quilt.”

Donna grew up in the Ozark County communities of Almartha and Souder during a time when women prided themselves on keeping their hands busy.

“When I was in high school, I spent a lot of time with my grandparents at Almartha because it was easier to catch the bus there,” she explained. “My grandmother, Carrie Murphy, never sat doing nothing. She was always making something with her hands, either piecing, quilting or embroidery. And she didn’t like to see anyone else sitting idle, so whatever she did, I did it, too! My grandmother was very frugal. She taught me to use the smallest scraps of material, to never waste anything.”

Donna went to Gainesville High School, where she remembers taking a clothing construction class from the late Stella Luna; the class was in the basement of the Christian Church, across the street from the school. Donna had never sewn on an electric machine and was eager to learn. But her mother was afraid she would ruin store-bought fabric.

“That year we had to make eight garments,” she recalled. “They weren’t just easy ones, either. We had to make a shirt for a man, a dress or other garment for a child – one a month! And in the weeks leading up to Christmas we had to learn to do some sort of handcraft we didn’t know – knitting, crocheting or embroidery. I really learned to do a lot that year, and after my mother saw that I could sew, she bought me some nice pink yard goods that cost $1.25 a yard. That was special!”

Donna graduated from GHS in 1944, and in 1945 she married the late Russell Walker. The couple both taught school and worked in various jobs, and also earned college degrees during the next several years. Donna graduated from Drury College with degrees in business administration and education, but what she liked most was owning a business.

“We were living in Ava in 1975, teaching school, when we bought the abstract office in Gainesville from Arthur Luna,” she related. “Russell’s folks bought the old service station on the southwest corner of the square from J.O. Wood, and Russell bought the adjoining buildings. Our son, Gerald, helped run the abstract office, and I found I had time to do something more – so I opened a fabric store. That was my recreation!”

Walker’s Fabrics was located where the upper portion of Mill Country Title is located today. Donna was inspired by a store in Ava owned by Mrs. Hazel Davis.

“It was right at the time that double-knit fabric was becoming very popular,” Donna said. “Everyone really liked it, so I stocked a lot of that. I didn’t know a thing about how to run a fabric store, but Russell supported me on my project. We went to Kansas City and found a store, named Kapel’s, that sold wholesale fabrics. We filled our station wagon up with bolts of fabric using money borrowed from the bank – and it worked! We went back up there a couple of times a year to restock.”

Donna bought a new sewing machine and made items for display. Her shop employee, the late Verda Fay Hambelton, also made samples. The women bought mannikins and had lots of fun dressing the shop windows. They sold Simplicity patterns, as well as some McCalls.

For about 10 years, Walker’s Fabrics was a thriving business in Gainesville. It was then sold to Aleta Collins, who eventually moved it to the square. Donna then focused her efforts on the growing abstract business. She sold that in 2007 and has been officially “retired” since then.

But Donna Walker takes after her grandmother – she doesn’t sit around doing nothing. Instead, she has written three books, all pertaining to Ozark County history. She and her brother, Max, have made sure the burial records for the Souder Cemetery are always up to date and available; in fact, that is another book that Donna has compiled. The book is being sold, and all proceeds go to benefit the fund for the upkeep of the cemetery.

But while she’s stayed busy with so many other activities, Donna has never gotten over her love of fabric. So, a few months ago, she decided it was time to do some more sewing. She bought a new sewing machine and is now taking lessons on how to use it. Once she has her new machine mastered, who knows? There may be another quilt display in the future! It seems there is no cure for a true fabric hound.

Donna Walker’s quilts will be on display through the end of the year at the Ozark County Historium on the west side of the square in Gainesville. The exhibit is free and open to everyone. The Historium is open from 10 a.m. to 2 p.m. weekdays. For more information, contact the Historium at 417-679-2400 or ozarkco1@ozarkcountyhistory.org