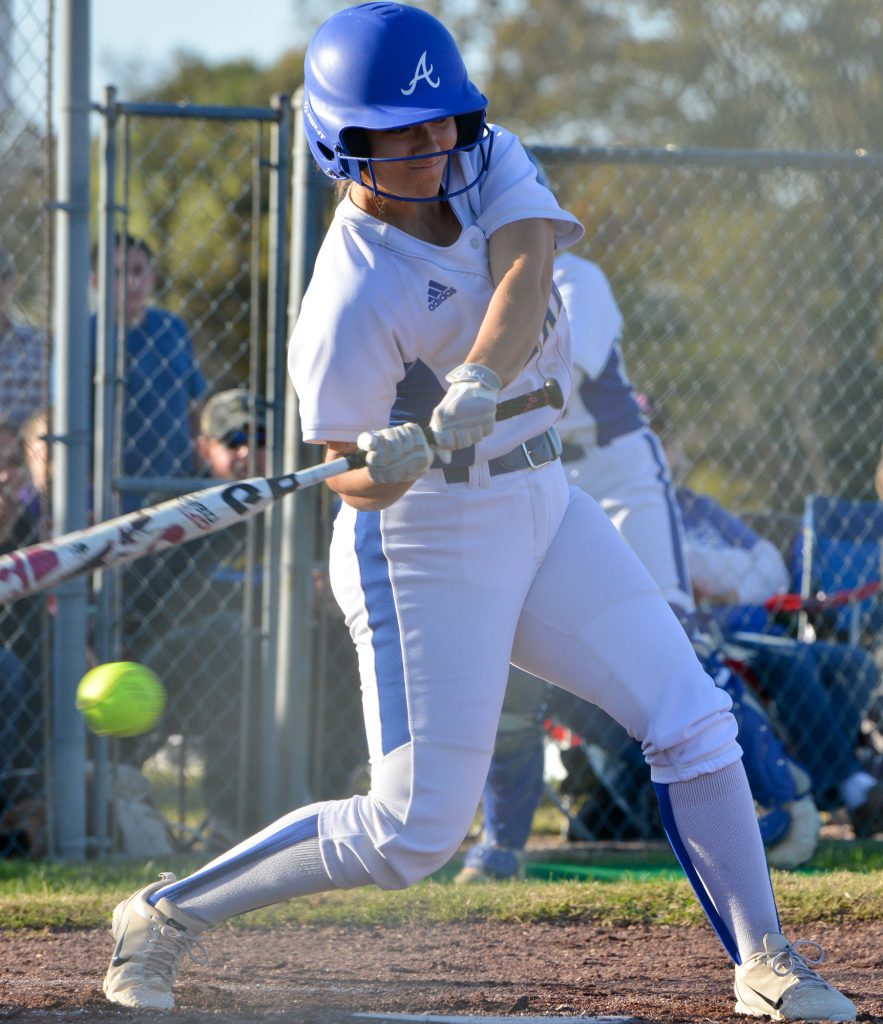 After clinching the District Championship with a walk-off, 11-10, victory over Mansfield the Lady Bears held on through three, both defenses working the field to keep the board on zeros.

Sherwood came in with a season record of 22-3 and an averaged run differential of +7.3 according to the Missouri State High School Activities Association website.

Their pitcher, Mac Morgan, started the game with fastballs easily above 60 miles-per-hour. In the first of four of the Lady Bears’ appearances she struck out three, Regan Koop taking a sharp hit-by-pitch to become one of just two Ava players who touched a bag that evening.

On the other end the Ava defense gave up one hit and an HBP to load two-on, leadoff batter Grace Parrott in scoring position on second.

A 1-3 ground ball play cut off Sam Hook at first, but Parrott and Morgan advanced. Sara Mendel pulled a strikeout from her pocket on a fifth 2-2 pitch then Macee Cutbirth made the play on a grounder for a 4-3 third out play to close the first.

The Sherwood Lady Marksmen’s six-through-nine were up at the bottom os the second after Ava had batters five-through-seven retired in order with three whiffs.

Shy Ianssen cracked a ball into deep left field for Sherwood’s second hit of the game and picked up an extra base when the Ava defense took time to return the ball to the infield.

Fortunately for the Lady Bears, she was stranded on the second bag as she had made it on two outs. Hailey Gudenkaut smacked one low to shallow left, but short stop Olivia Gastineau got her glove ahead of it to make the catch and save the inning.

Sara Mendel wore the 1-0 pitch from Morgan and was replaced with courtesy runner McKinley Goss. Goss was stopped on her way to second during Devin Rowe’s appearance in the top of the third.

Rowe herself was struck out, number seven to be sent back to the dugout in just three innings. Olivia Gastineau followed suit with a whiff on the 1-2 pitch sending the game to the bottom of the third.

Sam Hook hit one deep to Koop on the first look with two already away. She looked over her shoulder at first to find that Koop had dropped the routine fly ball and turned the play into a double.

But with two away, a softly hit grounder made the 1-3 for the third out.

Into the top of the fourth, the inning where things would split open for Sherwood, Ava’s Lexie Gastineau, Koop and Miquia Heinlein were retired in order by two Ks and a 2-3 dropped third strike on Heinlein.

The Lady Bears defense spent no time putting out Nevaeh Parson with a 6-3 play from Olivia Gastineau, but the bottom of the fourth became a long-lived nightmare for Ava.

Alexx Roofner sent one to the left-center fence, a double followed by a shallow single into right by Mackenzie Roofner. A catching error by Keeley Acres allowed A. Roffner to score making the game 1-0 for Sherwood.

Mendel fought into a full count against number eight batter Shy Ianssen but walked her to load the bags with just one out.

In the nine slot Gudenkaut also walked for a 2-0 lead over the Lady Bears. Parrott nailed an RBI-Single to left field before the worst reared its ugly head.

The same player which was decimating the Ava offense was about to put the ball where the Ava defense couldn’t get it.

A long Grand Slam from Mac Morgan sailed over the left field fence stunning the Ava defense and their home crowd.

Hook singled with bases empty and Mainard was beat to first by the 4-3 play by the Ava defense. Parson, the Sherwood fifth batter, nailed one into shallow right.

Lexie Gastineau picked up the live ball and hesitated before making a fielder’s choice rocket to Heinlein to stop Hook at home plate for the third out.

Nothing changed on the Ava offense. They were being shut down by a pitcher who was mentioned as already dedicated to collegiate ball in Arizona.

Cutbirth, Akers and Miller each struck out swinging against pitches which danced in the strike zone.

Bottom of the fifth came around and déjà vu hit the Lady Bears’ defense. A walk, a single and first on a catching error by Taegan Snow loaded the bases yet again. A Sherwood six-through-nine repeat of the fourth inning. Pinch hitter Krystal Atkin struck out swinging but was the only out Ava made in the fifth before the game was called.

Mendel walked Parrott, the opponent leadoff batter, for another run making the game 7-0 against the Lady Bears.

Morgan, who had now accumulated 13 Ks against Ava batters and hit a moon shot with three on in the fourth, made her fourth appearance of the game.

She took the first look from Mendel for a ball. On the 1-0 pitch she destroyed the ball a second time.

It sailed into dead-center field landing with a resounding crash as it struck the top of the scoreboard for another Grand Slam shot putting the Lady Marksmen into a run-rule fifth inning to finish the Lady Bears’ postseason bid.

The Lady Bears were owned at the plate with no recorded hits and two reaching only after wearing one from Morgan. Both baserunners were stranded.

On the other side of the plate the Lady Bears allowed 10 hits, stranding four before Sherwood literally slammed their way over Ava.

The Lady Bears end the season with a cumulative .346 batting average and .454 on-base percentage for a season-end .914 OPS.

Heinlein led the Lady Bears in RBIs, bringing-in 29 runs this season followed by Acres, Cutbirth and Koop each with 22. Olivia Gastineau was the only Lady Bear this season to hit a home run, a two-run dinger that found turf over the left field fence in Gainesville.

Outside of yard balls and RBIs, Olivia Gastineau led the team in hits, making contact and reaching 32 times this year. Lexie is right behind her with 31 hits.

Heinlein was clutch at the plate with 13 doubles and a total of 25 hits.

From the circle Mendel played 24 games and accumulated 61 strikeouts in her freshman year. A 4.842 ERA and 1.795 WHIP is quite the career start for a player thrust into the one slot as she keeps learning the game.

Julia Henry pitched 13 innings that were on the books before her season went sideways. She ended the year with a 3.769 ERA and a 1.462 WHIP.

Defense was never an issue for the Lady Bears as long as errors weren’t being committed. The team end the 2019 season with a cumulative .917 fielding percentage led by Miller (1.0 FPCT).

Olivia Gastineau put out a total of 112 players with seven assists, making just eight errors this season. She is seconded by Heinlein who put out 89 players this year. 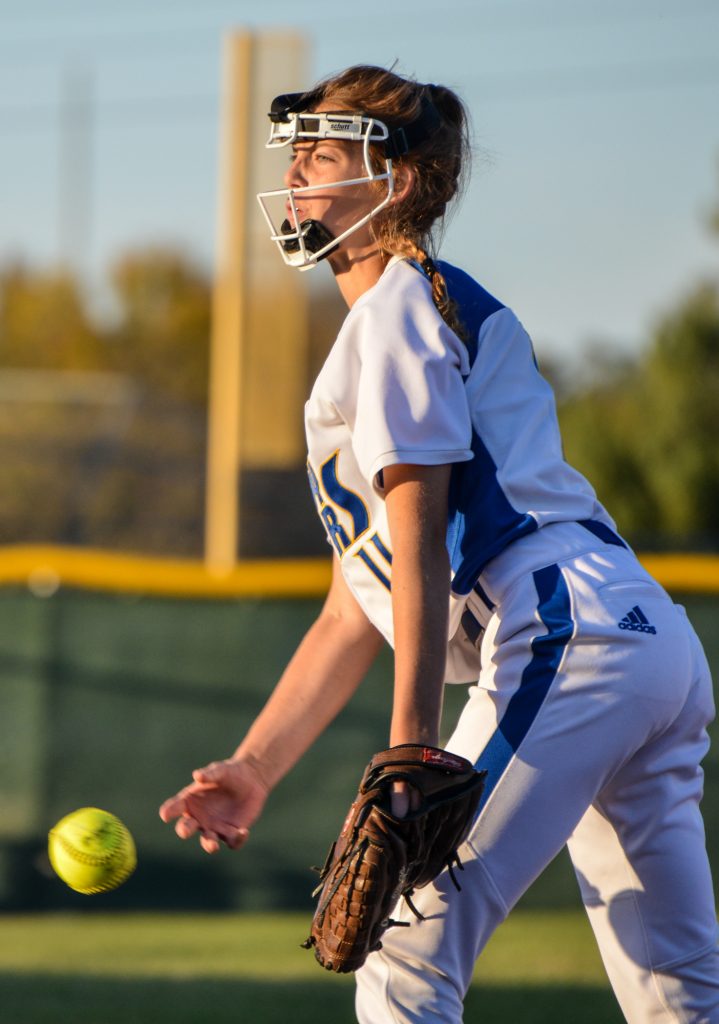 “We went three good innings right there,” said Sawyer. “I knew once they went through the line and seen her once… Then the fourth inning, I thought we might get close to being out of it but we gave those runs up. Then they just kept falling in place for them and they’re a good ballclub. I’m looking for them to be in the final four.”

Koop and Miller are out of the game picture next year as graduating seniors. Olivia will likely stay at short as Sawyer makes changes to the lineup and looks to refine the order for the Lady Bears.

He also gets a luxury not always afforded to a high school softball coach; he gets two capable pitchers to use in the team’s roster strategy.

Henry is doing well and will likely return next season to join Mendel as a one-two punch starter rotation, which will benefit the Lady Bears greatly in tournament play or on those off-pitching days.