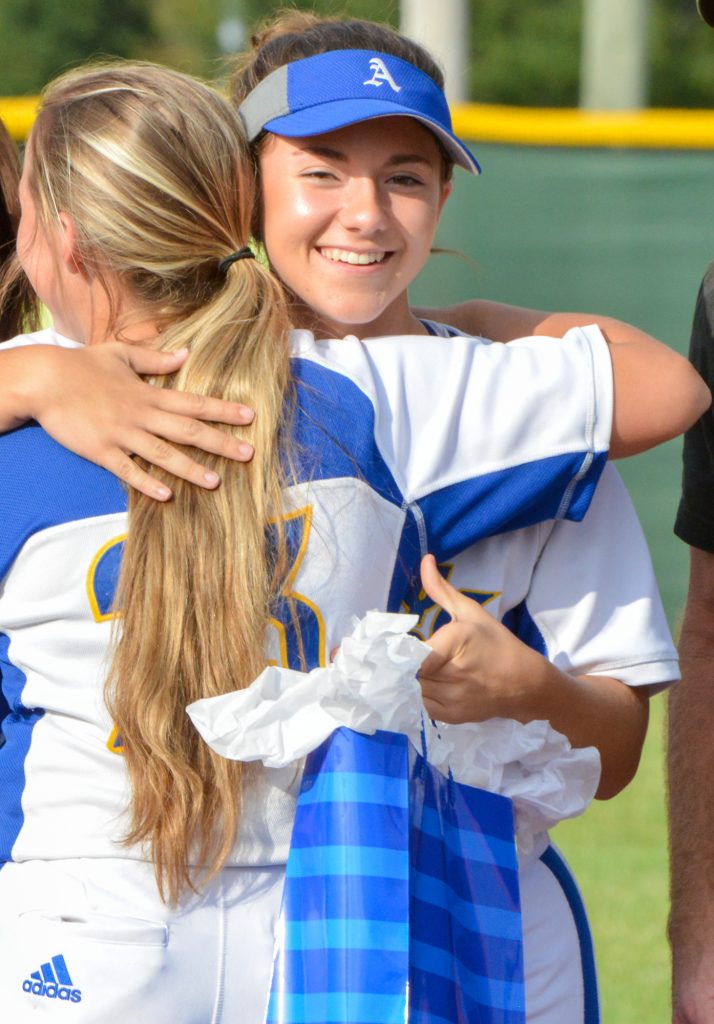 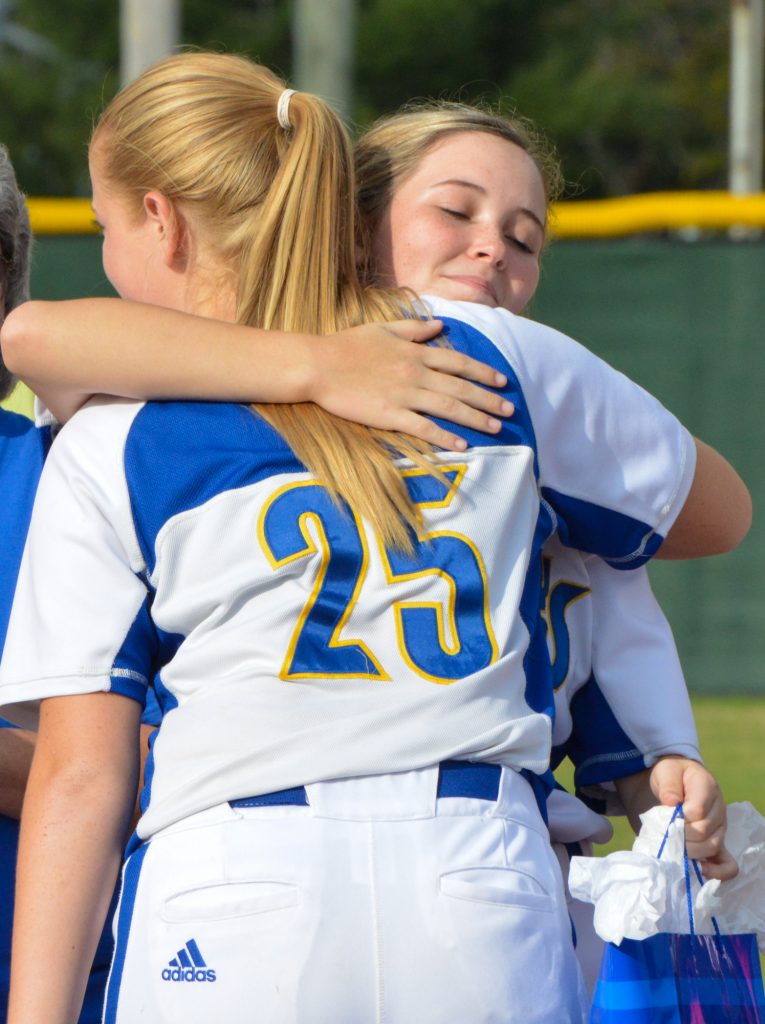 Makayla Miller is hugged by teammate Kaylee Springer during a senior night ceremony prior to a game on Tuesday, October 15, 2019 in Ava. (Jason Hoekema/Herald)

Parting is such sweet sorrow for seniors Makayla Miller and Reagan Koop, who both graduate this year and leave the Lady Bears and look toward their own futures in the “bottom” of the tenth month, softball’s regular season end.

A 15-0 blowout of the Parkview Lady Vikings was a great end to the regular season with District starting Wednesday, the Lady Bears with a first-round bye.

On Tuesday however, it was all business after Ava said goodbye in a pre-game ceremony. Then it was a 6-3 grounder for out one on the Lady Vikings.

Sarah Mendel struckout Ari Vargas and Keeley Akers cleaned up the inning with a 5-3 play on a ground ball. 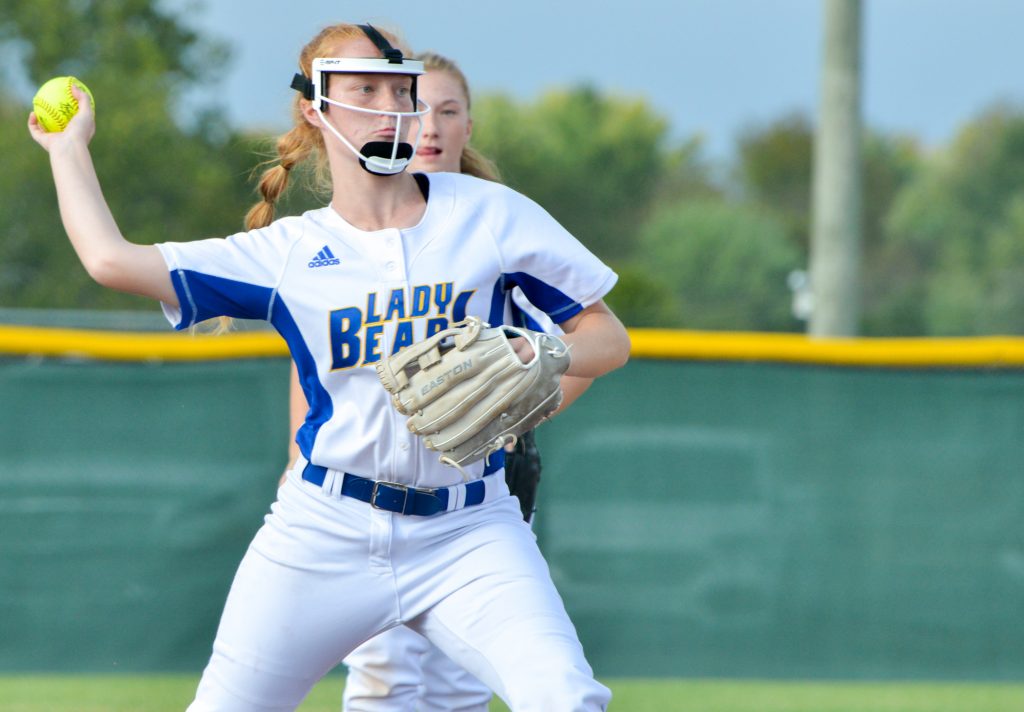 Macee Cutbirth sent the ball to right-centerfield for a two-RBI double when she swung on the 2-0 pitch. Batting around the order, the Lady Bears ran-in five and stranded three after the sink-shipping offensive onslaught.

At the bottom of the second things started out just as badly for the Lady Vikings as did the first. In fact, doubly so.

Lexie Gastineau singled in her second plate appearance, finding the grass in shallow right field. Koop followed on with a walk. Heinlein cracked one into the fence for an RBI-double, Gastineau scoring.

Macee Cutbirth singled as did Keeley Akers for two RBIs. Makayla Miller sent one deep into right for an RBI double. Mendel flied out, first to be retired. It didn’t stop the Lady Bears.

Devin Rowe came up and pulled a walk on the 3-1 pitch. Lexie came up with a single after Olivia flied out for the second out.

Even with two out, the Lady Bears scored four more runs batting around the order twice in as many innings. In the end, the game lasted a whole 2.5 innings and ended it leading 15-0, the shortest game of the season.

The regular season is now over, but the Lady Bears are not done yet. With the top seed they earned a first-round bye and will face the winner between Seymour and Gainesville, who played Wednesday at 4:30.

Mansfield also earned a first-round bye and will face the winner between Hartville and Willow Springs who also play Wednesday, but at 6:30.

The Ava Bears are hosting the tournament and scrambled to beat the rain while resetting the field for use after the passing cold front.

Ava’s first game is at 4:30, Thursday here at home. The Class 2 District 11 Championship takes place at 4:30, Thursday. Results from the tournament will be available in next week’s edition of the Douglas County Herald.

Leading the Lady Bears at the plate was Olivia Gastineau (.464 AVG, .605OBP), who ended the year with a 1.248 OPS. Macee Cutbirth also had a strong .386 batting average spread over 68 plate appearances.

Through 21 games of statistics available, starters who appeared in at least 19 games had no less than a .289 batting average and no less than a .386 on base percentage, led by Olivia Gastineau with a .605 OBP.

Statistics for Julia Henry are limited, but she did end her season with a 3.76 earned-run average with 20 strikeouts before she had to step aside after a medical issue arose.

Sarah Mendel was forced into the circle and had to grow as an ace pitcher in her freshman year. In the game against Gainesville, she walked not a single batter.

She pitched for 96.1 innings allowing 118 hits and 92 runs, 71 earned. Even with 57 walks, she was able to earn 46 strikeouts in her freshman year, a feat not often reached by a first-year pitcher.

Combined, Henry and Mendel finished the season with a combined 5.25 ERA and 1.784 WHIP, which should bring excitement for the coming seasons after the two threw a combined 314 first-pitch strikes and 74 no-walk innings.

On defense, Makayla Miller was perfect in fielding with 16 putouts and was involved in one double play for a season 1.00 FPCT.

Miquia Heinlein also finished perfect with 72 putouts. Even with early-growing pains the Lady Bears maintained a .926 FPCT through 21 games scored by coach Sawyer.

Olivia Gastineau led in putouts from her spot at short with 82 batters or runner put away, followed by Heinlein with 72 outs. Several of those were cut 4’s at home plate.

The Lady Bears committed just 28 errors this season, which was largely outweighed by the 327 outs generated by the Ava defense. 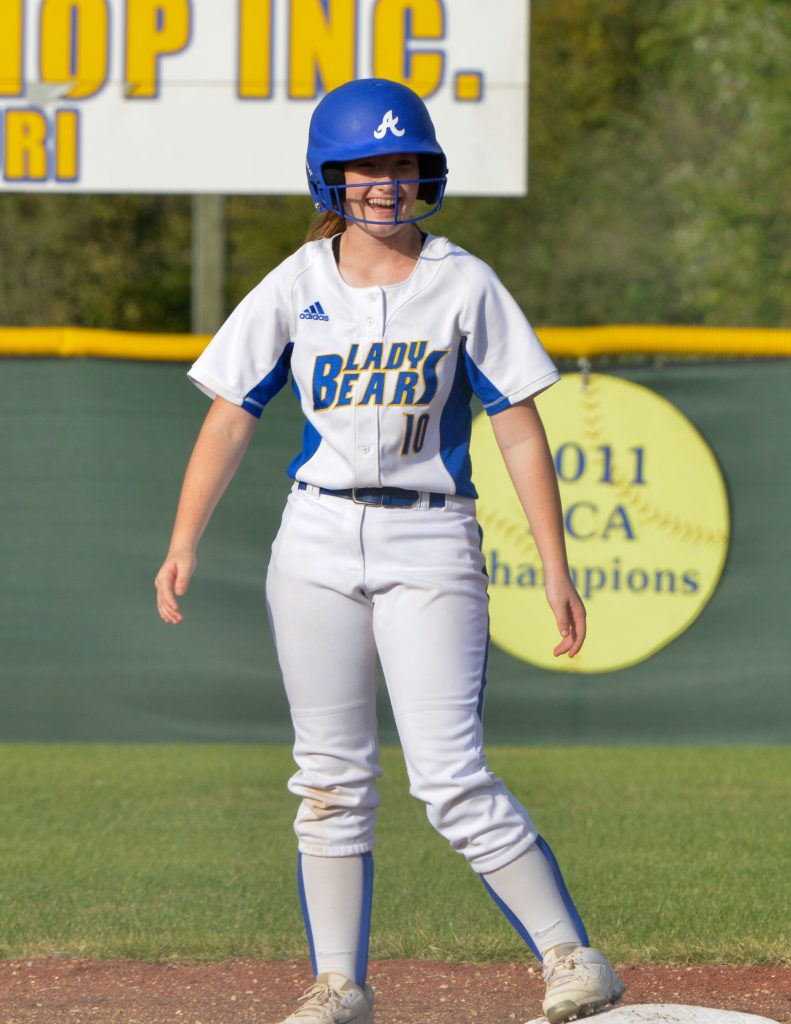 Ava High School baserunner Olivia Gastineau (10) is all smiles after taking an extra base on an error at first during the 15-0 blowout against Parkview on Tuesday, October 15, 2019, in Ava. (Jason Hoekema/Herald)

On the opposite end of the game, six players on the varsity team had a perfect stolen base percentage. The team was led by Olivia and Lexie Gastineau in the number of bases stolen, 20 and 18 respectively.

It’s been great,” said an emotional Miller. “I’ve had a lot of fun. When I get my bunts down, because I’m always so scared I’m not going to get it done, and then when I do I feel pretty good.”

Also departing this year is Regan Koop, who played in the outfield opposite of Miller.

“Oh my gosh. It’s been hard,” said Koop. “Especially coming as a freshman, starting and having all that weight on my shoulders. But when you make that play or you score those runs, it’s unbelievable, that feeling is so great; that you helped your team. It’s sad that it’s my last year.”

Words for the underclassmen coming up in the ranks?

Take everything in stride.

“Coach Sawyer is sometimes going to yell at you,” said Koop. “But he’s yelling at you for a reason. Take into consideration that he’s doing it for you and enjoy your time (on the team) because it feels like I was a freshman yesterday, and now I’m a senior.”

Both young ladies have plans for higher education, Miller looking into a possible career in social work and Koop looking into working in the psychological medical field.

The regular season ends with a final record of 13-8-3 with the Class 2 District 11 Tournament coming up with Ava playing today in a single-elimination championship run.