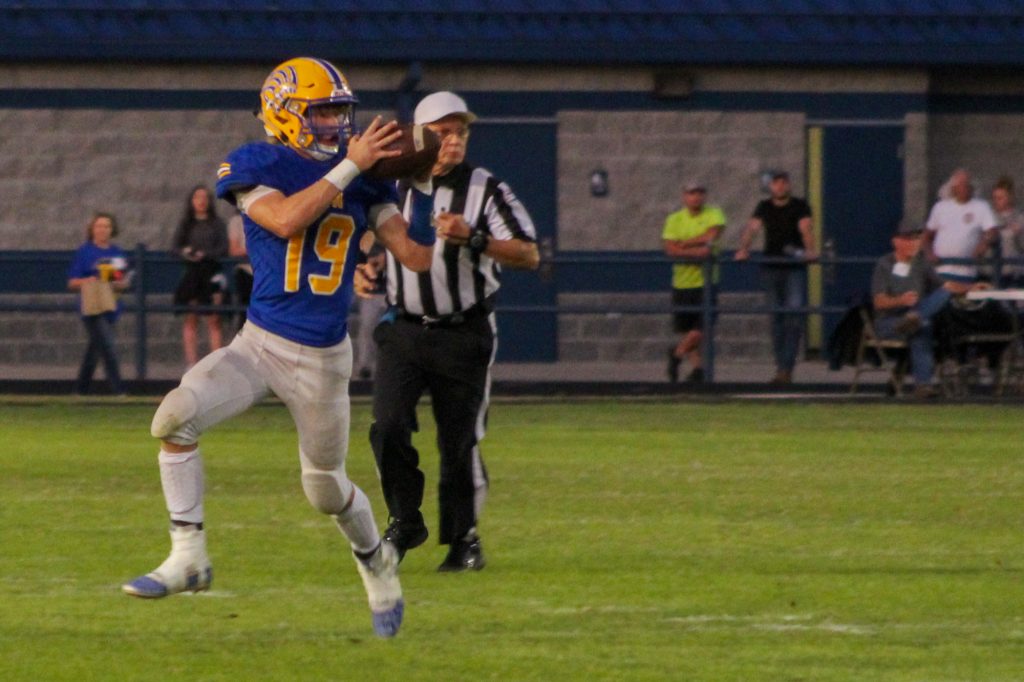 Ava High School senior Josh Bray (19) makes a pass reception during an SCA Conference game against Salem on Friday, September 27, at Harlan Stadium in Ava. (Kayla Dry/Special to the Herald)

Attention turned to the Ava Bears football program as the young men went 4-0 after their 50-14 triumph over Liberty on September 20. Television sports anchors finally looking beyond Springfield came to Ava to cover this year’s football success.

Now the Bears are 5-0, halfway through a still-perfect regular season, after bombarding the Salem Tigers 44-16 at Ava’s Homecoming game this past Friday.

“Well we played solid football the first half and had some big plays,” said coach Dan Swofford. “That’s always good for us. Our defense played solid and really just pretty much shut them down. It was a good homecoming game for us.”

Historically, Ava hasn’t dropped a game to Salem since October of 2015. Since then the Tigers have walked away with goose eggs at the end of each game up to this year. That could have been the case again, but Ava’s junior players needed some time on the gridiron on a Friday night to feel the “reality” of a live game.

In the second half, Ava’s junior varsity roster took over the game and allowed two touchdowns by Salem. But the lessons learned by younger players was well-worth it.

“Well, I think a lot of them grew up a little bit tonight for some weird reason,” said Swofford. “After (Salem) scored that first touchdown there was some ‘chewing’ going on. We got after a couple of them because they should have made that tackle. “They’d say ‘I’m just a freshman. They’re a senior I couldn’t make it.’ They’ve got to learn to make that tackle, and I saw them grow up a little bit through that game.

The Tigers won the toss, deferring to the second half with Ava defending the North end zone in the first quarter. By the way, it was never touched in the first 12 minutes.

The Bears wasted no time in the first quarter with four possessions, three for touchdowns in the five minutes and thirty-eight seconds the Bears had with the ball.

Two of those touchdown drives lasted less than thirty seconds. The first was Nate Swofford with the keeper on first and ten for 53 yards to the pay dirt. Only seventeen seconds had elapsed, and the Bears had already set the tone for the first half.

Salem’s first possession lasted about 90 seconds before they were forced to punt thanks to wide-out coverage down-field by Spencer Skyles.

Ava’s next drive resulted in their second touchdown despite two costly penalties amounting to a loss of 25 yards. The drive would have been shorter, but a block in the back put Ava back on a pass to Myers that went near the Salem 32.

Back at two and ten at midfield, Skyles got the hand off from Swofford and converted to first and ten with a 24-yard rush. 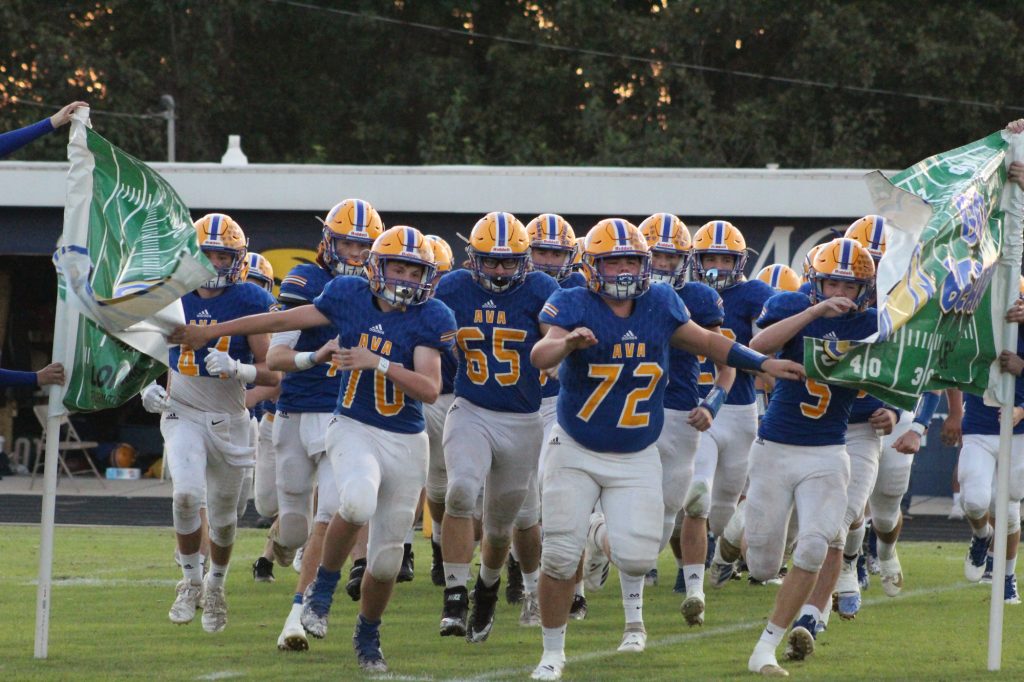 The Ava High School football team tears through their banner at the start of an SCA Conference game against Salem on Friday, September 27, 2019, at Harlan Stadium in Ava. (Kayla Dry/Special to the Herald)

The next play was a pass from Swofford, finding Josh Bray in the midfield for the 23-yard touchdown completion. Now leading 14-0 the Bear picked the ball right back up four seconds later after Salem failed to move more than six yards.

Clock running, Swofford let a missile go down the field. On the other end was Bray for a 46-yard touchdown completion. Two bombs, two touchdowns by the Ava defense.

For a team that prioritizes the rushing game, Swofford has an arm and he can find his guys downfield with accuracy.

“Our objective as an offense is (to make) big plays,” said Swofford. “Those big plays are either going over the top or running around the end. One of the first things we noticed was that their free safety was making the play at the line of scrimmage on our fullback. That means there’s no one playing in the middle of the field. That’s exactly what happened.”

The second quarter was Déjà vu. Skyles took the pitch-out option from Swofford and ran up the left side for the 19-yard touchdown. The Bears failed to convert the extra points, the second time this game. Through four quarters Ava was four of six on making the conversions.

Interestingly, the Bears were able to pick up the two after 15 yards of penalties from an illegal shift and hold later in the quarter.

Another turnover on downs put the ball right back in Ava’s hands, again.

Myers picked up three yards on the carry, putting the Bears at second and seven. Swofford launched another missile up midfield to Skyles for a 48-yard touchdown completion. Myers picked up the extra two points from the three.

Josh Bray would be on the receiving end of another pass from Swofford to put up six. The Ava offense was able to find the dirt with Myers after a 15-yard setback from penalties.

At the end of the first half, it was 44-0 with the Bears dominating the field.

Frustration was building on the Salem sideline with their head coach yelling “Come on, Fellas!” with 1:07 left before the break.

At the half, Ava had converted seven times for first downs. Two of those were earned with passes to Mendel on a third-and-two then again on a second-and-two.

Of the six touchdowns made in the first half, five were made on passes – which includes pitches from the quarterback option. 166 passing yards accounted for the five airborne scores, Swofford throwing two bombs for 94 of those touchdown yards.

The Bears went 10 of 12 on pass completions which included plays brought back by penalties. For a rush-first team, an 83-percent completion rate in one game raises eyebrows and hopes for an immaculate season.

After playing Houston (2-3) tomorrow night on the road, the Bears have undefeated Thayer (5-0) to worry about on October 11 in week seven.

That match at home in Ava will probably decide the South Central Association Conference Champion and is the game to watch, stream, or listen-in on during the Bears’ regular season.

According to the Missouri State High School Activities Association website, Thayer does carry more points per game (42) while Ava carries most points allowed per game (19.6).

Statistical breakdowns themselves do not determine results, but the two SCA juggernauts are headed full speed toward each other.

Even looking ahead to Thayer, Swofford and his team are keeping their eye on the season just one week at a time.

“We’re just going to prepare one week at a time,” said Swofford. We’ve got to play Houston first. When we get past them, we’ll be thinking about Thayer.

With 22 points scored in the first and second quarters and Salem staring at the fourth possible shut-out at 44-0, the Ava Junior Varsity took to the field for some deserved Friday-Night Lights experience.

The second-string group did allow 14 points to Salem, but the experience was valuable for the underclassmen who may replace the players who have helped carry Ava to a 5-0 record.

The Bears held Salem to just two yards on the Tigers’ first possession before Mendel took the helm in the quarterback slot. He had three carries for 15 yards and one first-down conversion in Ava’s first possession following the break.

Later a pass from Mendel to Hunter Hall wound up as a fumble recovered by the Tigers on their own 32. A 67-yard drive with a 44-yard pass completion by Bradlee Glover put Salem on the board, avoiding a fourth shut-out since 2016.

A late fumble by Ava gave Salem great field position on the Bears’ 15-yardline. The ball slipped again in as many plays only to be recovered by the Bears on their own 10-yardline. Wyatt Johnson rushed for a first down on an 11-yard carry in the fourth quarter to the Ava 25.

The Bears pushed to their own 32-yardline but had to punt on fourth-and-three. Myers sent the ball down to the Tigers’ 20-yardline where it was returned to the 28. On Second-and-ten the Tigers rushed to their 41 fourth first-down conversion of the game. On their own 47 at third-and-four, a nine-yard carry by Brock Cooper put the Tigers in Bear territory.

On the Ava 40, Gover found Eli Newman for a 40-yard touchdown pass. With the extra two points made the Tigers were able to muster 16 points before departing for the evening.

The Bears took control of the ball with 1:37 left in regulation, returning it to their own 45 before three kneels on 40-second play clocks burned the game clock to zero.

Swofford ended the night with 83 rushing yards and another 205 on option tosses and two bombs which both scored with Skyles and Bray completing the play for a combined 94-yards on the two touchdowns. Swofford was the first to find the pay dirt in the game with a 53-yard dash and picked up a two-point conversion with a dive into the end zone near the end of the first quarter.

With the airborne assault being the Tigers’ demise, Myers only picked up 38 rushing yards this game. He did make a 12-yard reception that could have been a first down, but a block in the back took the line back to Salem’s 47.

On defense Myers made at least five unassisted tackles and was also in on three assists. Senior Blake King picked up two tackles, one which broke up a reception attempt which could have been a runaway for the Tigers.

Josh Bray landed four tackles and was in on two others with one pass deflection along with Skyles who broke up a catch in the first quarter. Even Swofford was credited with three takedowns and a pass deflection early in the second quarter.

On the night at least 25 tackles, 12 assists, three pass deflections and a sack by Colby Miles led to a solid defensive game which shut down the Tigers in the first half. This is just what was caught and recorded, the defense putting up numbers greater that what was observed.

Again, Ava was subject to self-inflicted yardage losses with 50-yards worth of dirty laundry thrown on the field while the Tigers maintained all-positive yards.

This season the Bears have given up an estimated 300 yards in penalties alone. Many of those situations have put Ava in deep where they were unable to get out from behind the chains.

Tomorrow night the Bears take on the 2-3 Houston Tigers on the road where a colleague of Swofford has been working on building a program from the ground, up.

“We have got to play good solid football,” said Swofford. “They’ll be ready for us. They have a program that is building down there and one of their assistant coaches is a very good friend of mine. He is doing a great job with them. They are trying to get healthy and so that’s the deal, they’ll probably be healthy when we see them, and we’ll have to be ready to play and do the best we can.” 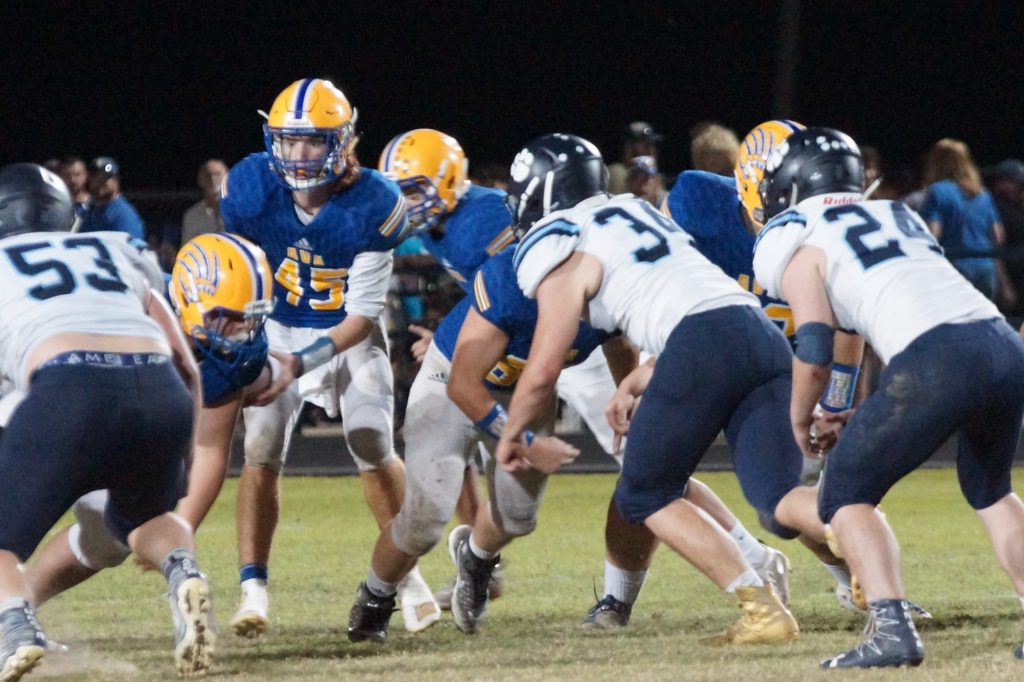 Ava High School junior, Zach Mendel (45), tries his grit in the quarterback slot in the second half against a dominated Salem Tigers on Friday, September 27, 2019, at Harlan Stadium in Ava. (Kayla Dry/Special to the Herald)