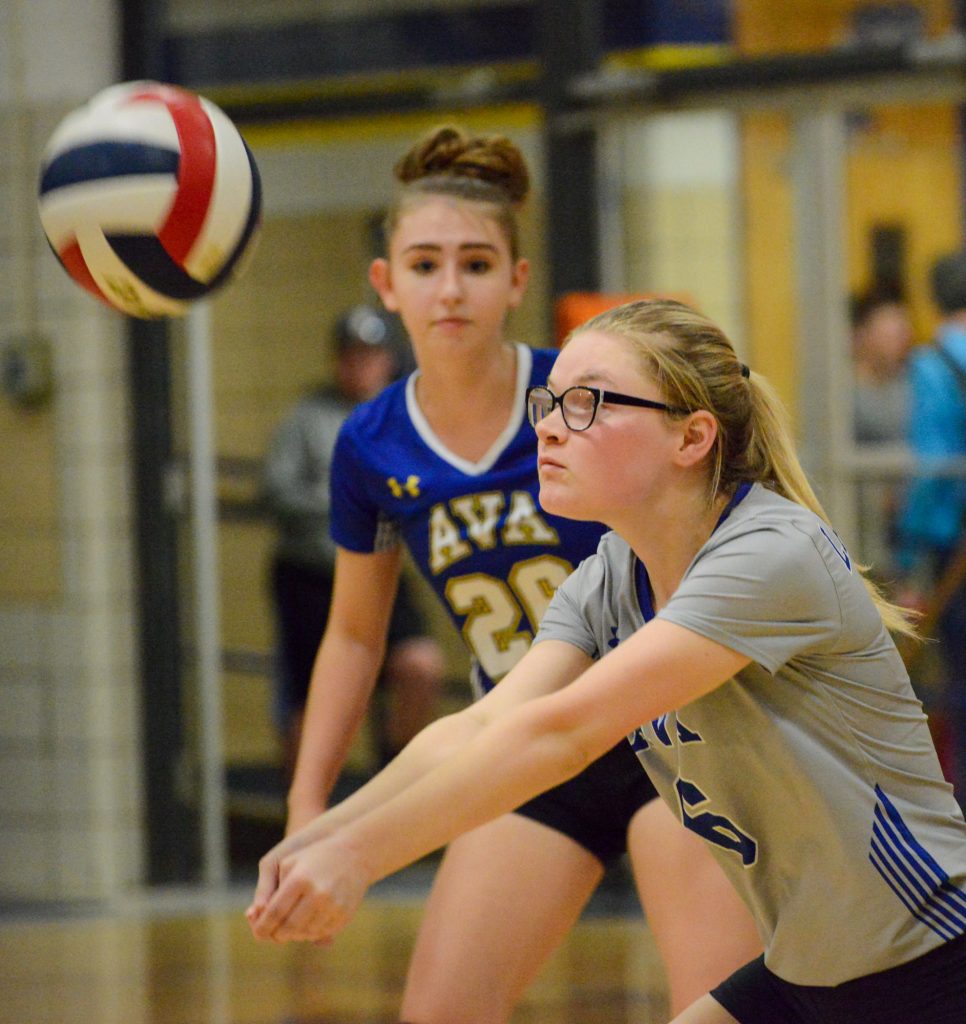 Comeback wins are some of the best in any sport. The adversity, the uptick in emotion and momentum… The screaming.

As coach Emily Petty opened the door to the girls’ locker room inside the Ava High School gym after Ava’s 2-1 comeback win, the deafening sound of girls screaming and celebrating their victory drowned-out the parting crowd.

“The first game I was a little nervous,” said Petty. “I don’t know if they came off a little nervous in Game 1 but holy cow, we picked it up in Game 2 and 3. We let loose and they stayed intense the whole time.”

Ava drew first blood and service when a Willow Springs kill attempt went into the net and rolled onto the floor, but they knotted the game up at 1 each when Chyann Watts bounced a hit off of Taylor Ernst.

Nothing out of the ordinary occurred until Claire Fossett made her first kill of the night, a solid shot into the Willow Springs defense and on to the floor.

“Middle hitter Claire Fossett had a heck of a game tonight,” said Petty. “She was getting up and she was being powerful when we needed her most.”

However, Willow Springs had offensive hitters of their own and pulled ahead by two after a net violation by Fossett. Digs became a problem for Ava with kill shots from Willow Springs hitting the back-row players and ricocheting out of play.

The Willow Springs offense also had a few tricks to stir up points off of middle blocker Olivia Heriford, Haley Herrera and Fossett. By approaching the hit from the inside, hitting out, the block would go off Ava players and sometimes land out of play.

Because of the touch, Willow Springs picked up several points using this tactic.

Trailing by three in the first set libero player Kaylee Downs missed a dig, the ball hitting the floor inches from her platform.

At 22-18, Ava trailing by four, officials blew a call in which neither was watching the travel of the ball as it hit near the boundary lines. The volunteers who flag the ball as in or out, are not always the best at keeping their attention on the game.

The replay broke in Willow Springs favor, but a hit by offensive hitter Lauren Hall took the rally back to Ava’s side of the court.

The lead grew to five, Willow Springs leading 24-19. Fossett came up big in denying the Willow Springs game point with a block that went straight down to the maple.

The Ava Lady Bears rallied for three points, but in the end a kill attempt by Fossett went into the net instead of over ending the set 25-23 for Willow Springs.

Whether it was the botched hit or something else, Fossett came back with a competitive sass in the second and third matches walking away from kills and hard-earned points with little celebration and great distain for the opponent trying to foul up a game on homecoming week.

“We kept telling our setter to feed her,” said Petty.  “Feed the beast right now and give something high because she can jump out of the gym. She was putting it down for us.”

The Ava Lady Bears started to pull away on the score board early in the second set, Sarah Dobbs serving as Ava rallied for four straight points after another official blunder aggravating coaches and spectators. 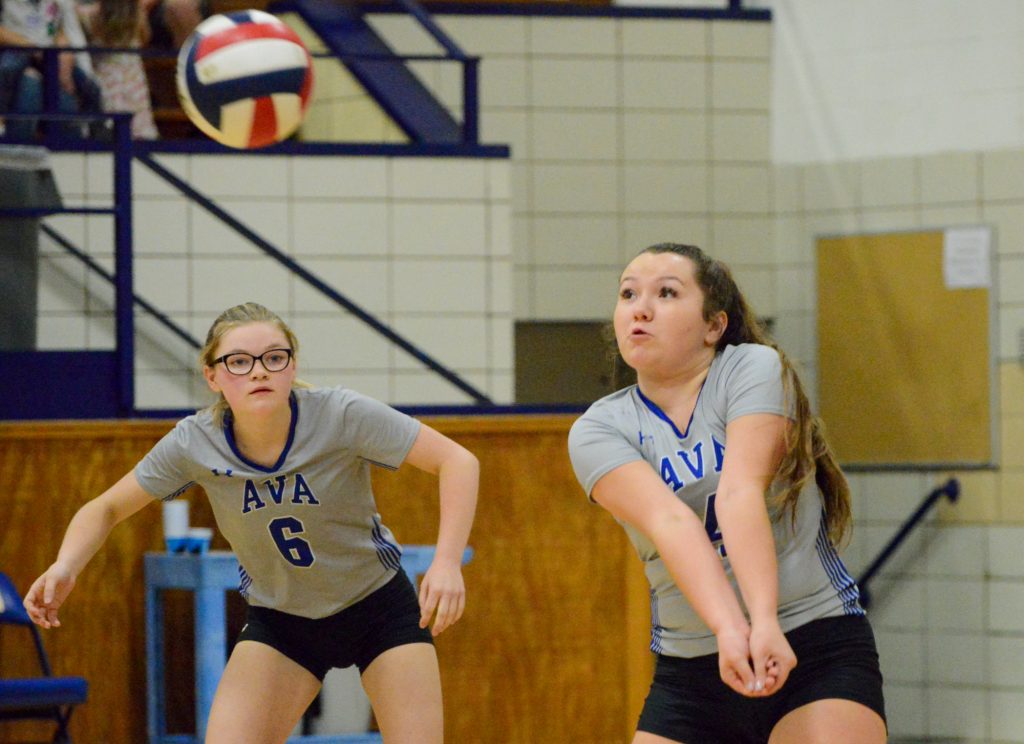 Petty could be heard from across the court exclaiming that if the officials didn’t know what the right call was, to just replay the service. It was the second time that Ava lost a rally after officials blew a call.

Some confusion and communication break downs led to points for Ava, who pulled ahead 11-8 with a quick-thought tip from Herrera.

Willow Springs kept at their ideal kill angle, hitting another ball off of Heriford and Ernst that went out for a rally loss. Shortly after, Heriford came back with a solid kill to start three-point sprint to a 14-10 lead.

Service went back and forth just as the ball did, Heriford picking it back up after a kill and Fossett finding a gap to pick it back up later. However, it seemed that the serve/receive didn’t stick with one side or another for much more than a few points.

After Ava chipped ahead, 16-12, an angry-sounding kill came from Fossett starting a four-point rally after Willow Springs struggled to keep the ball in play or out of rule violations.

A kill from Hailey Sigman stopped the run, but Fossett returned the favor with another hit straight onto the maple to start the winning rally for the Ava Lady Bears.

With Downs serving, the Lady Bears picked up points from a block by Heriford and Ernst for the ten-point lead. A hard hit by Herrera put the Lady Bears at their game point, finishing the set with an attempt by Willow Springs’ Hailey Sigman going out of play for the final point for Ava.

After the 25-13, match-tying set, the Ava Lady Bears pulled ahead again with rallies of three- and four-points numerous times in the third set.

An ace from Dobbs was the last straw for the Willow Springs bench, who put middle hitter Chyann Watts back into play.

It wasn’t their top player which made any difference, though. Balls going out of play on the Willow Springs players, strong defense, and a handful of net and line violations kept Ava healthily ahead by four points.

“Our defense really stepped up, seeing the angle of the ball and seeing the hitter’s or tipper’s hand at the tape and being able to kind of move around,” said Petty.

Tips from Heriford and those hard-hit, well-placed shots from Fossett led Ava to a 25-20 victory after a serve from Willow Springs went well out of the play boundary.

The young ladies on the Ava bench exploded into screams and celebrations which were followed by more ear-piercing noise from the locker room as coach Petty entered shortly after the game.

“We’re playing nice, high-velocity (volleyball),” said Petty. (The team is) determined and the girls are coming out, showing up every single game and they’re putting on a show.” 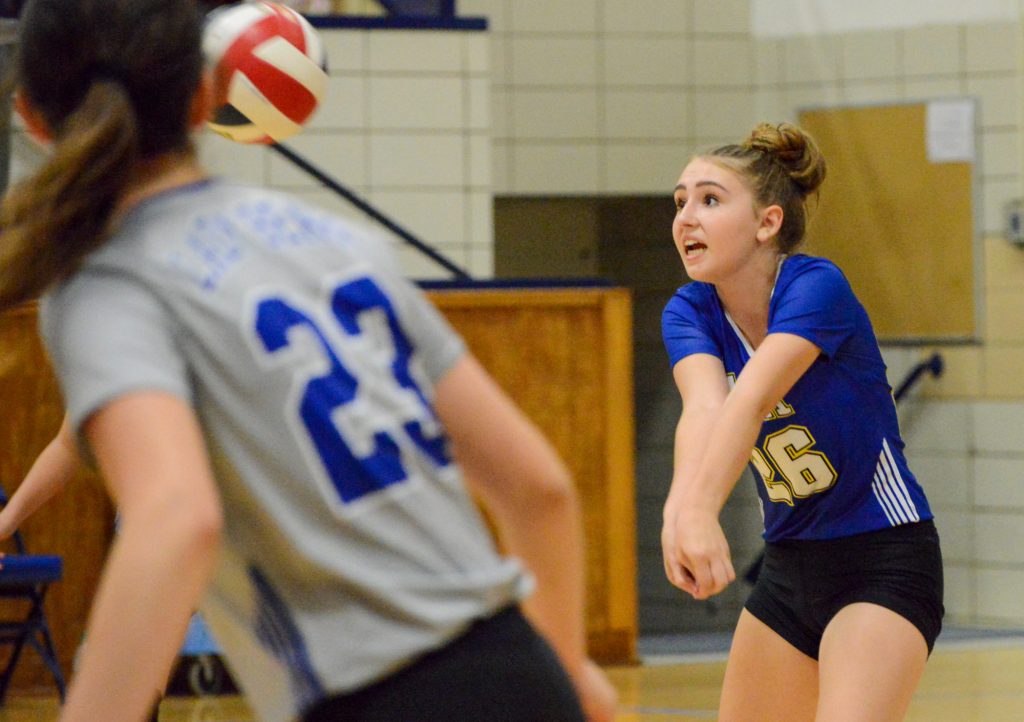