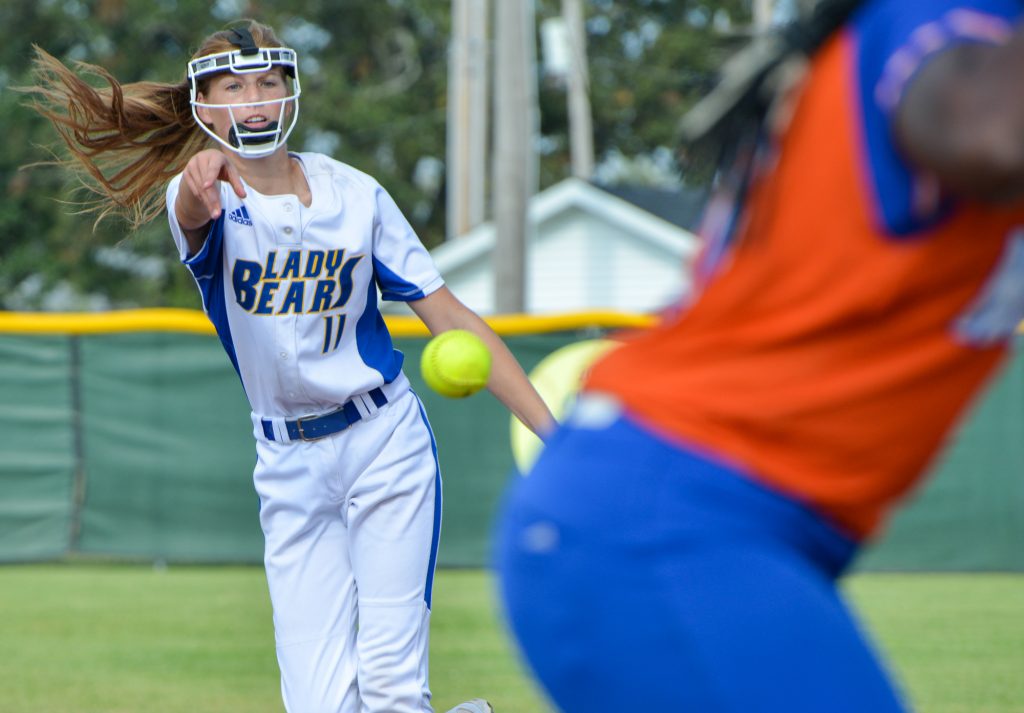 With Julia Henry currently out of the lineup pending a medical clearance, the defense had to rally around JV pitcher Sara Mendel as she stepped up and led from the circle.

Mendel threw two strikeouts and kept several batters guessing with full counts and quality at-bats. Hillcrest had a ringer in AZ Martinez, who could run the bags with ease and scored two runs for the Hornets as their leadoff batter.

Mendel kept many batters guessing, catching back up in the count during several at-bats and battling hitters through the full count. Mendel put away two herself with a K in the first and third innings.

The Ava defense was able to put away most of the batters and baserunners with a big inning by shortstop Olivia Gastineau in the top of the fourth.

Gastineau was the defensive star, responsible for seven outs from her work in the dirt. She put away batters in order during the top of the fourth with a 6-3 play, a reflex catch on a chopper headed her way and a gloved ball on an infield fly which went right into her territory.

Gastineau was also the player who started a quick 6-4-3 double play in the seventh to help keep the Hornets off the board.

“Gastineau had a heck of a day,” said Sawyer. “Then she had a good day at the plate also.”

Offensively, Gastineau scored two runs and an put up an RBI for the Lady Bears. Her first was from a double to deep left field in the bottom of the first, her second in the fifth after reaching on a single and working the bases until an RBI single from Reagan Koop brought her in. In the sixth, after a spectacular one-handed catch of a foul ball by coach Sawyer, Gastineau made an RBI single to bring Snow in for a run. 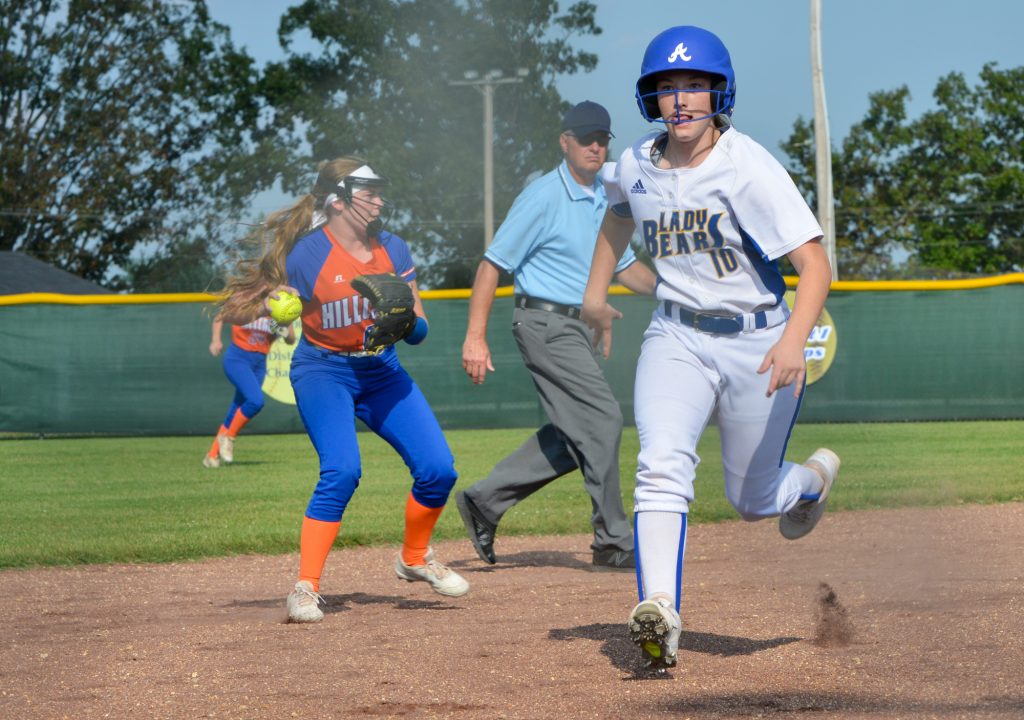 Ava High School baserunner Olivia Gastineau (10) closes in on third base during a game against Hillcrest on Thursday, September 12, 2019, in Ava. (Jason Hoekema/Herald)

The Lady Bear defense could have forced a different outcome Thursday had the Hornets not found their groove in the top of the sixth. AZ Martinez had already put two on the board for Hillcrest, circling bases with ease because of her speed.

Martinez was put away in the fifth and sixth innings, which could have also opened the lead. Catches by Keeley Akers and Macee Cutbirth kept her from adding on runs.

The defense lost momentum in the sixth after Kiki Walker nailed one to the left field fence, a stand-up double. Olivia Gastineau managed an awkward catch on a bouncer to put away Halle Pyle at first, but Walker used her wheels to put up another run for the Hornets. 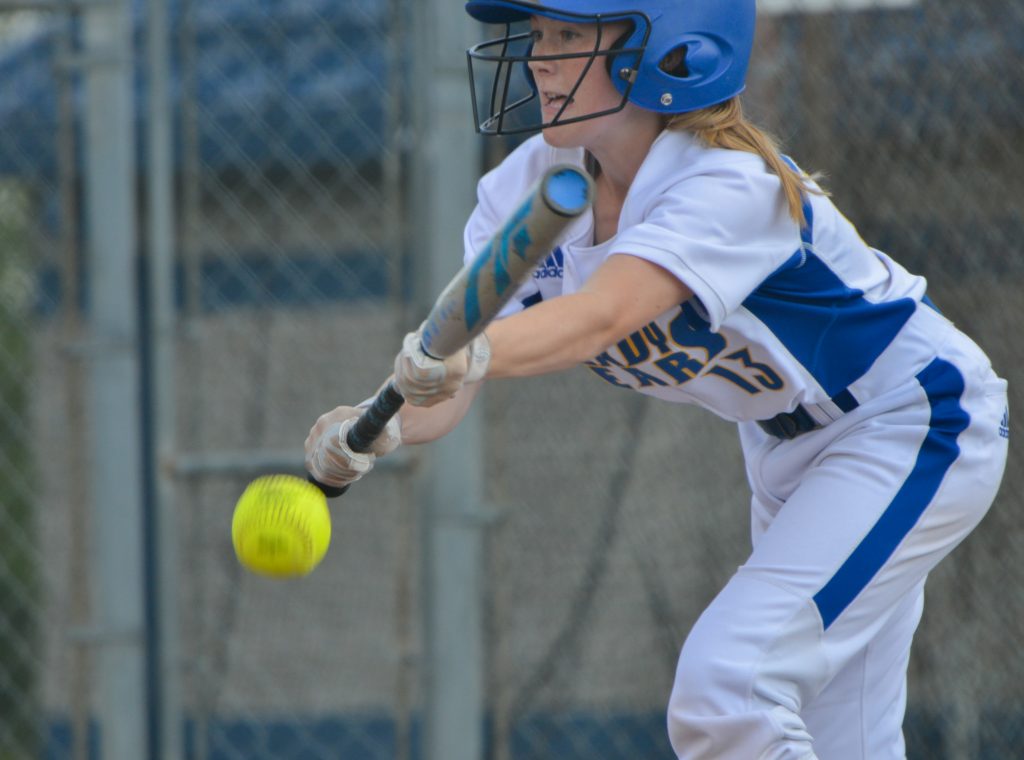 Ava High School’s Lexie Gastineau (13) bunts the ball during the first inning of a game against Hillcrest on Thursday, September 12, 2019, in Ava. (Jason Hoekema/Herald)

Cami Davis found ball four on the 3-1 pitch from Mendel in the sixth. She worked the bases as the defense continued its lull, failing to put away Emily Craven on the dropped third strike on a full count. With two on the pond Shannan Riley found the hole in left field for an RBI single, extending the Hornets’ lead to 4-2.

Brooke Blair followed with an RBI single to the same location, a gap behind the Ava shortstop with no one who could cover that much grass in a pinch. Craven scored to further the split on the scoreboard, 5-2.

Maddie Wilkinson tried the same spot, but this time Ava left fielder Reagan Koop was there for the catch.

What should have been out three was lost in the dust by Gastineau at short, allowing Taylor Deloach to reach first on the error.

AZ Martinez was a thorn in the Lady Bears’ paw since she led off at the top of the first. With bases loaded Ava’s defense needed to wake up. 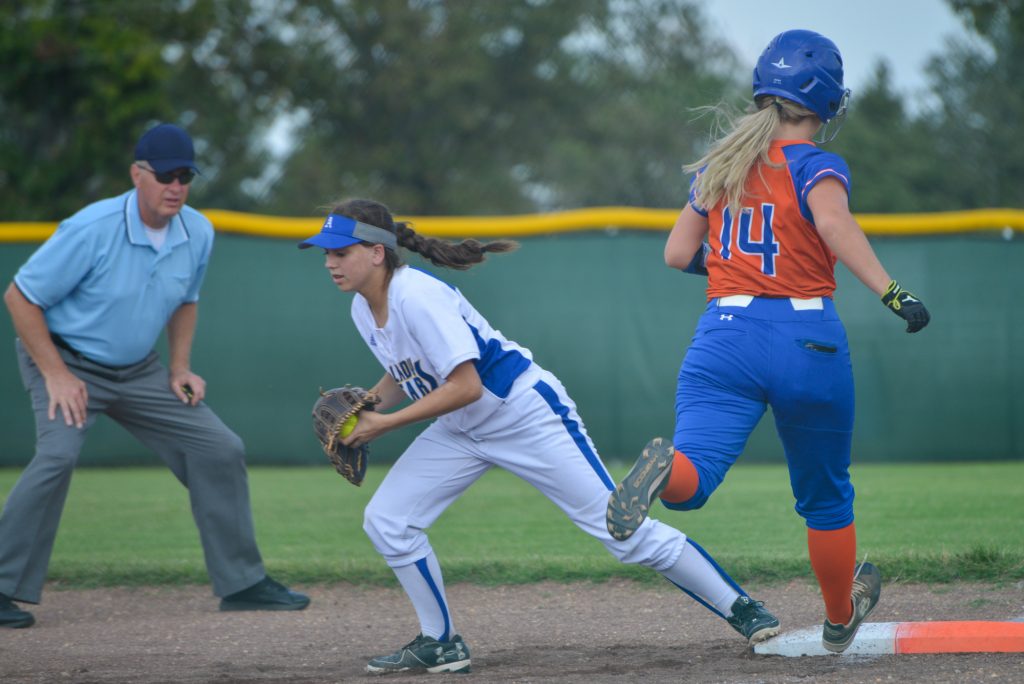 Martinez knocked one up for the catch by first baseman Teagan Snow. Her catch saved the Lady Bears by closing the open door at home plate.

Offensively, the Lady Bears were in a reactive state. Tying the game from behind, twice.

Runs by Olivia Gastineau in the first and fifth innings kept the Lady Bears within reach.

Despite Ava out-hitting Hillcrest 11-9, giving up six called third strikes and a whiff at the plate put a damper on possible run gains in addition to two tags on dropped third strikes.

“They weren’t getting out of the box,” said Sawyer. “Make them at least throw.”

Hits weren’t finding the gaps in the Hillcrest defense, many remaining on the infield. Olivia Gastineau, Makayla Miller, and Snow were the only players to reach with hits to the outfield. The same three scored runs on those hits, Gastineau and Snow with RBIs bringing runners home in the sixth.

“We made some good plays in the field,” said Sawyer. “We’ve just got to start putting the ball out there and play a little better when we have runners in scoring position. We looked at too many pitches today. We went down on the third strike, four or five times looking, and you can’t do that in this game.

Ultimately, the offensive effort didn’t produce enough runs to get the walk-off win. Instead the Lady Bears went straight to the batting cages after the game to prepare for possible 60-mile-per-hour pitches at the Reed Springs Tournament on Saturday, September 14th.

“We’re going over to the cage right now, said Sawyer after the varsity game. “We’re going to work on some fastballs and stuff.”