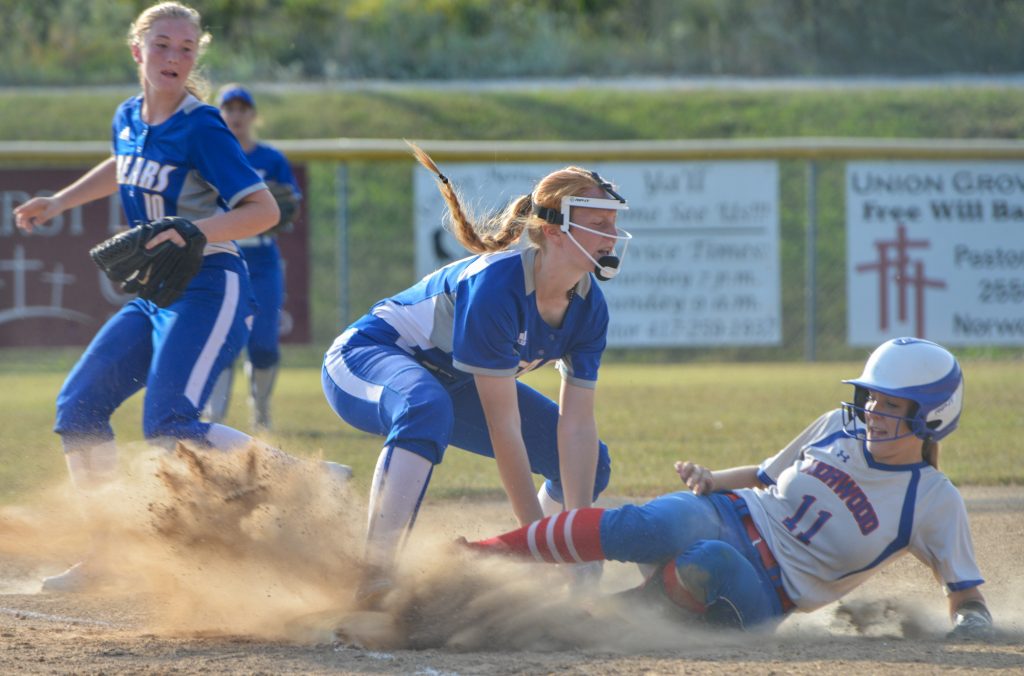 Keeley Akers (40) applies a tag to Norwood High School baserunner Josie Sullivan as she steals third during the bottom of the fifth inning in a match between the Lady Bears and Lady Pirates on Monday, September 16, 2019, in Norwood. (Jason Hoekema/Herald)

NORWOOD – They say that defense wins championships. If that is the case, the Ava Lady Bears are heading in the right direction with a 2-1 win over Norwood; despite small setbacks from a continued slew of mental mistakes.

The top of the first didn’t yield any runs, but a solid liner to left field by Olivia Gastineau set the tone through the third when the Lady Bears were making no less than four appearances during their time on offense.

Gastineau got her base hit off the sixth look from Norwood pitcher Payton Drake. Miquia Heinlein advanced her to second making the walk to first on the sixth pitch. At this point the Lady Bears missed their first scoring opportunity when a 6-3 grounder by Macee Cutbirth stranded two.

Julia Henry is still out but was present at the game in her jersey, supporting her teammates while waiting for a medical decision. Sara Mendel has been holding the circle down in her absence.

This is where the defensive plays started and continued minus a minor setback in the top of the fourth.

Ava center fielder covered some serious ground and leaped forward for a diving catch in left centerfield, putting out Drake for the second out. Mandel earned a K on Sierra Cornelison, who whiffed on the sixth pitch from Mendel.

The clutch plays came back in the bottom of the second when a 6-4-3 double play put out Jade Coatney and Cassie Chadwell to quickly end the Lady Pirates’ turn at bat.

Ava shortstop Olivia Gastineau was busy working for the defense as well, having part in making seven outs throughout the game. She caught two infield fly balls, initiated two double plays and was the middle woman in a spectacular game ender. Which we will get to later.

During the bottom of the third, the defense put them away in order, first with a fly ball caught by Gastineau.

Annie Sullivan sent one out to the centerfield fence where Ava outfielder Lexie Gastineau threw a bomb back to third baseman Keeley Akers to put out Sullivan after she over-advanced past second.

Then Akers went on to catch one while nearly running into the fence along third. Out three, and the plays kept coming.

Mendel got her first – in the Herald’s books – called third strike in a varsity game to open the fourth. Mental mistakes started a downward trend from there. Cutbirth had a rough outing at second during the bottom of the fourth inning. A base hit from Drake turned into Norwood’s tying run after back-to-back ball-handling errors got into Cuthbirth’s mind.

Lexie Gastineau poured water on Norwood’s offensive spark with another catch in centerfield on a fly ball hit on the eighth look by Sierra Cornelison. Left-handed batter Jade Coatney reached first, but a 6-3 grounder from Chadwell cut the Lady Pirates off from circling the bases.

Bottom of the fifth and cue the Lady Bears’ second 6-4-3 double play to put away two in just six pitches from Mendel.

Josie Sullivan reached, but was stranded at a stolen third base when a fly ball was caught by Cutbirth on the infield.

The defense plays kept coming into the sixth and final seventh inning. Led by Heinlein with a catcher’s scramble into the visitor’s dugout fence for the first out. After telling the umpire that she was okay, things kept going.

Keyera Cornelison smacked one down the first base line, but Teagan Snow was there completely stretched out and on one foot for the catch. If the ball were not caught, Cornelison could have had a speculative double on the Lady Bears.

Sierra Cornelison got lucky pulling the ball down the third base line. It got down but she was limited to a single as the Lady Bear defense reacted promptly. A routine fly ball to Akers closed the inning up, Norwood stranding one.

Bottom of the seventh and the first pitch from Mendel gets hit… right back into her glove. With the eye-opening reflex catch inside the circle, the first Norwood batter was already taken care of. A 6-3 grounder amounted for the second out, but Annie Sullivan destroyed a ball like she did back in the third inning.

The power in her swing plus her speed around the bases makes her a great offensive player and one which can make inside-the-park home runs.

The ball reached a little further left this time, putting it in Koop’s territory. She picked up the ball and fired a rocket to O. Gastineau as Sullivan started turning third.

Gastineau fired it off with the speed and accuracy needed by Heinlein to make the play at home. In a dust-covered runner versus catcher scenario, the Lady Bear defense kept Sullivan from tying the game for extra innings.

Although the young women were alive and working as a team on defense, the Lady Bears struggled with just four hits and one walk. A few Norwood errors and a dropped fielder’s choice ball to first allowed for some batters advancing.

Olivia Gastineau reached first on the full count with a liner to left field. Koop flied out to second for out two as Heinlein made first on the walk. A standard 6-3 grounder put out Cutbirth, the Bears’ fifth in the order.

Makayla Miller made first with a hit into the center field gap at the top of the second but was tagged out at home when she didn’t slide to get under the tag for the third out.

Olivia Gastineau got her second hit of the afternoon with a dropped fly ball. She advanced to third thanks to a sac bunt by Koop, who was credited with a quality-at-bat for advancing Gastineau.

Heinlein also picked up her second hit during the third inning with an RBI-single, Gastineau scoring the first run of the game. After Cutbirth flied-out to first, Heinlein was caught stealing second to close the top of the third.

The Lady Bears weren’t ahead for long when errors sent Drake around the bases for a run, and the rally boosted the Lady Pirates into two strikeouts on Akers and Miller. Mendel reached on an error but was picked off at first.

The fifth was an unhappy 1-2-3 for the Lady Bears with the top of the order picking up strikeouts on the sixth, third, and fifth pitches in order. The sixth didn’t help the Lady Bears much, either.

Miller led off the top of the seventh, reaching on an error. Pinch-runner Devin Rowe took over at first and made third on a hit from Mendel.

Snow whiffed on the sixth look, but Lexie Gastineau was the Lady Bears’ hero. She reached first on the fielder’s choice, but a dropped ball kept her there while Rowe picked up the go-ahead run for Ava.

Whether it be excitement or a mindful mistake, Lexie was put into a small bind at third as the defense scrambled around her. Forgetting to tag third on the way home, she was called for out three.

Even with mindful mistakes the Lady Bears managed the 2-1 win over Norwood, the defense winning this one with a strong defensive effort through seven innings.

The Lady Bears will move onward to the Bakersfield Tournament on Saturday, September 21 followed by a trip up North 5 for a meeting with Hartville on the 24th. 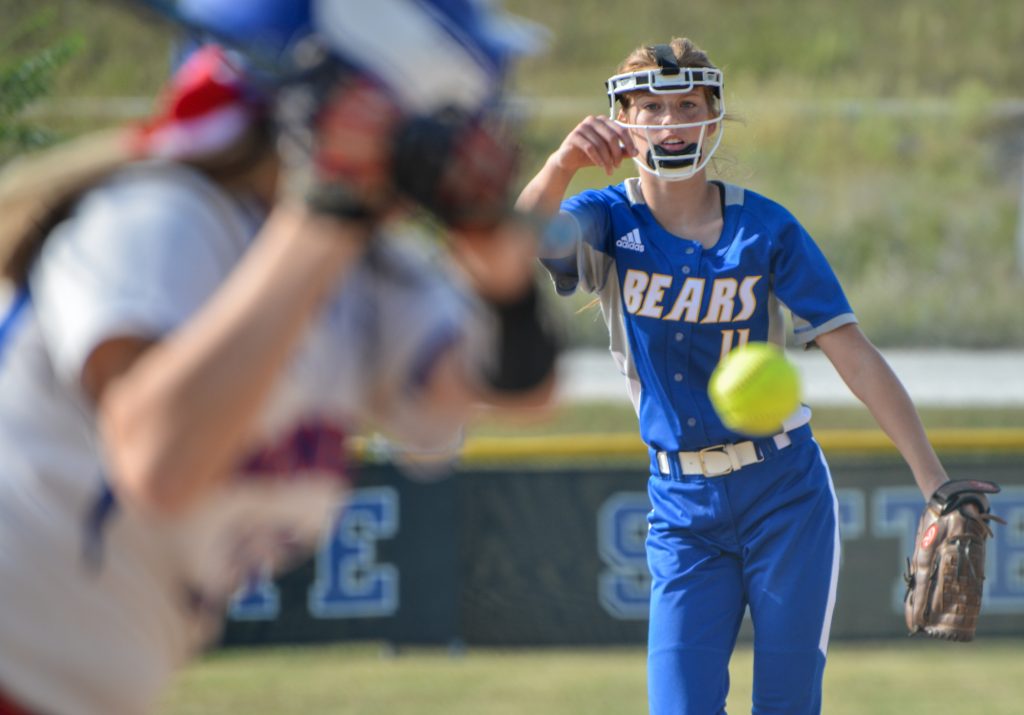