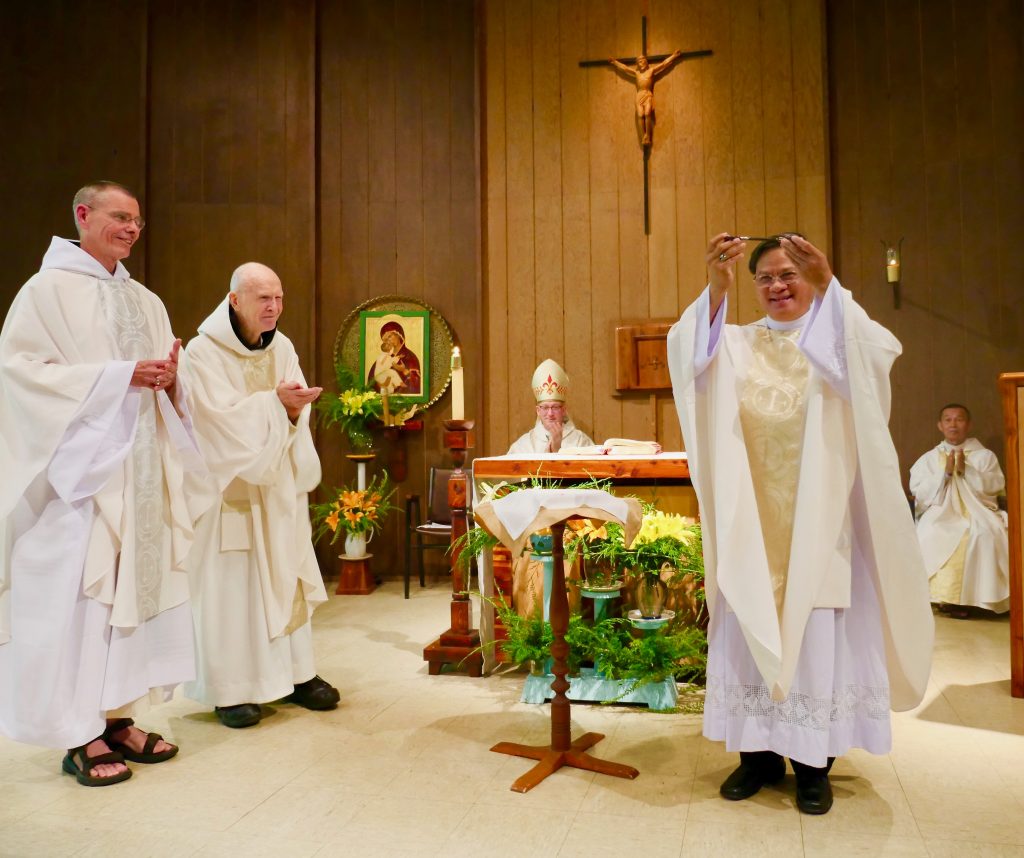 (Left to Right) Fr. Mark Scott Abbott of New Melleray in Iowa, Fr. Cyprian Harrison of Ava, and Bishop Rice (seated) applaud as Abbott Joseph, originally from Our Lady of Divine Grace in Vietnam, displays the key to the Assumption Abbey Monastery in Ava, Missouri. The ceremony marked the end of a six-year process of migrating ownership of the facilities.

For the resident monks used to quiet meditation, contemplation, and prayer, last Thursday at Assumption Abbey must have seemed like Times Square on New Year’s Eve.

As the bell tolled, visitors made their way to the mostly full chapel.

Cameras and smartphones popped out periodically to capture and commemorate the event.

A turning over. A passing of the torch. A surrender. And a new beginning.

The monks who built and have lived at Assumption Abbey for over six decades just gave it away. 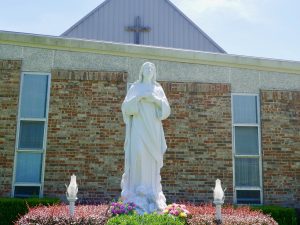 A statue of the Virgin Mary outside of Assumption Abbey.

Lock, stock, and barrel. The Abbey. The fruitcake business. The guesthouse. The land. All handed over.

They gave it away to save it.

“Between changes in society and changes in the church,” says Father Ciprian Harrison, 89, “we didn’t have any younger Trappist monks coming in to take things over. And we didn’t want to curl up and die.”

With their numbers both aging and dwindling, the Ava monks did something that no other Trappist monastery in the United States has done.

They looked for someone to give the monastery to.

As you might do when looking to give away an heirloom, the American Trappist monks looked within their own family first.

They found a Cisternian Monastery in Central Vietnam that was running out of space.

“The Trappist order was a reform of the Cisternian order,” says Father Ciprian. “So we share a common Monastic tradition.”

The two groups worked up a phased experiment.

Phase one started in 2013 when four Vietnamese monks moved into Assumption Abbey as guests. The goal was to see if the two groups could coexist, and overcome language and cultural barriers.

“There were some growing pains,” says Father Ciprian. “But no serious clashes or difficulties.”

Phase two began a couple of years ago, when the Vietnamese monastery sent another small group of monks. They polished up their English, learned the fruitcake trade, and began taking over maintenance of the grounds from the elderly American monks.

And somewhere in there, the scales tipped.

With three American monks remaining and nine Vietnamese monks in residence, the Vietnamese were ready to take on full leadership and ownership.

Thursday’s service was the formalization of that transfer, with the key to the monastery being passed from the Americans to the Vietnamese.

Currently, the changeover is largely symbolic. “We’ll all continue living the same as before,” says Ciprian. “We’ll still make fruitcakes. The monastery employees will remain. The name will stay the same. The Missouri State Corporation will stay – but with new officers.”

As Monks called to live a life of poverty, it makes sense.

“This was all a gift to us to begin with,” explains Father Ciprian. “3480 acres and a large house were donated to us by Joe Pierson, a newspaperman from the Chicago area. What we freely received, we freely give.”

Learn more about Assumption Abbey online: assumptionabbey.org. Video clips of the transition ceremony can be viewed on the Douglas County Herald’s YouTube channel. 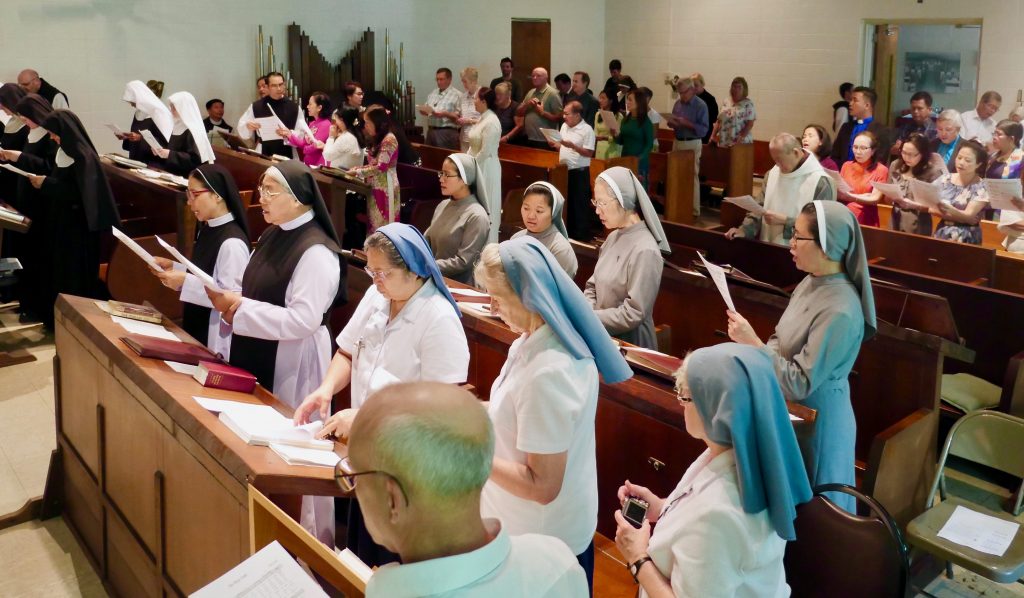 The event was attended by approximately 80 people. Photo by: Michael Boyink/Herald 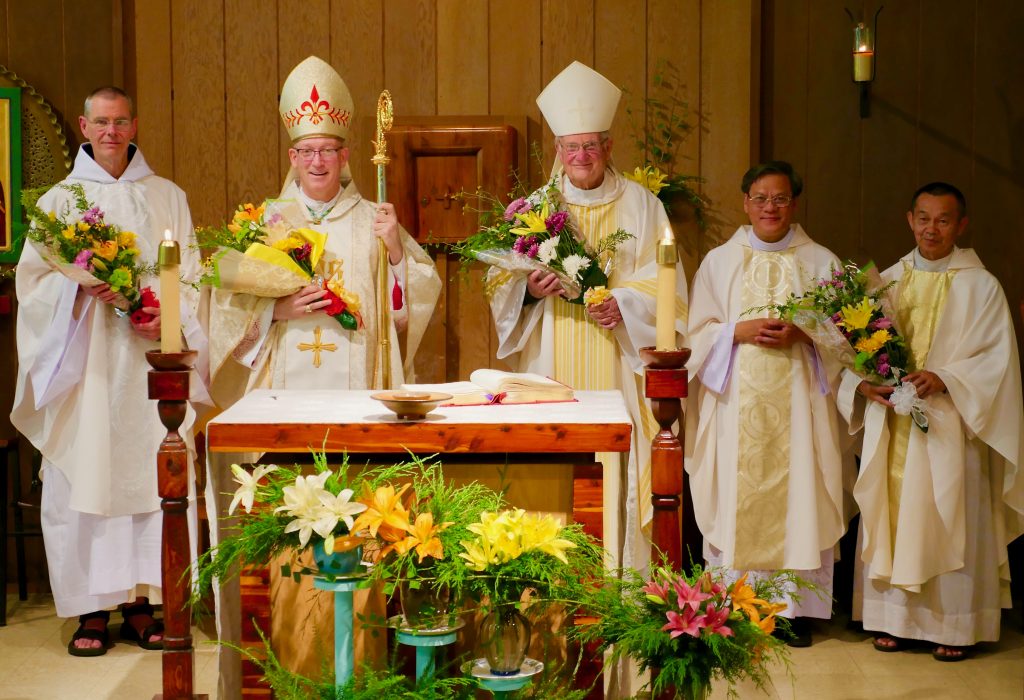 The Vietnamese group presented flower bouquets to the Priests.