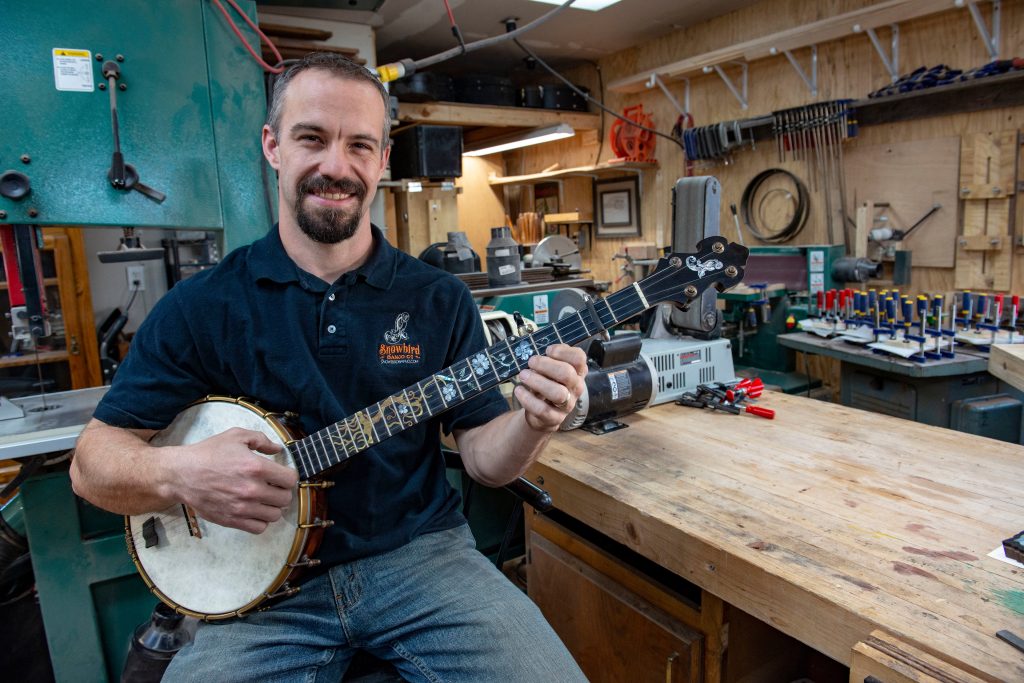 Most folks picking up a new instrument would have started with music lessons and a secondhand beater from the pawn shop or local music store.

Call him unconventional, but Jeremy Myers decided if he wanted to learn to play the banjo, he’d just have to build his own. Building one for himself quickly turned into building more for others, and Snowbird Banjo Co. was hatched.

“I tend to jump to the extreme step before others,” the White River Valley Electric Cooperative member says with a laugh. “I was building another one – because you can’t stop at just one – and I thought, ‘I could do this.’”

It wasn’t long after moving to Ava – where he did computer networking for the local school district – that Jeremy met local legend and musician Alvie Dooms.

Having himself been a guitar player since the age of 7, Jeremy had some experience repairing them for friends. As he and Alvie got to know one another, Jeremy started learning to play the fiddle, then moved on to fixing them and doing rehair work on bows.

When he visited the McClurg Jam to start playing, a new instrument plucked his heartstrings. In no time, Snowbird Banjo Co. was born, taking a two-year hiatus when Jeremy and his family moved to Alaska.

“In Alaska a snowbird is someone who goes south in the wintertime,” Jeremy says, adding the family moved back to the area in 2016. He points to the headstock of his banjo, where a snow owl with flowing tailfeathers made from mother-of-pearl shines iridescently. “I was afraid people would have that same connotation, so I created an owl.”

Among the three basic types of banjos, Jeremy tends to gravitate toward the open-backed style used for playing old-time music. He also works on bluegrass banjos with resonators and hopes to one day try his hand at gourd banjos.

True to his roots, he also repairs and restores vintage instruments. A few 1920s plectrum necks are on the bench right now. One is being repurposed as a five-string banjo for Alvie, while an old Stromberg is receiving some long overdue attention for another client. As Jeremy points out the ogee, the double curve located along the neck at the fifth string, his love for the instrument becomes apparent.

“Compared to every other instrument, no other really looks good with both curved and straight lines like that, except for maybe the violin,” he says, carefully turning another banjo in his hands. “That fifth string gives you the opportunity to do all kinds of creative stuff.”

The building process starts with selecting the type of wood, which plays a major factor in the range of tone the banjo will eventually produce, and rim and tone ring.

Jeremy used to build rims in a block style, cutting, shaping and joining numerous small pieces of curved wood to form the circular foundation for the head skin. He’s teaching himself the steam-bent approach, where after being steamed, bent and cured, the wood is placed in an outer form and laminate pieces are glued together, making a single, solid piece.

All of the necks he builds also are laminated, an important feature for ensuring the strength of the wood.

There are a few other details Jeremy insists on for his handcrafted harmony-makers. He favors Remo Fiberskyn and Renaissance head skins for their volume and “performance friendly” tolerance of humidity.

Wood, largely sourced from a Missouri shop which sells to such names as Martin Guitars and Bishline Banjos, tends to be either walnut, maple or ebony, with walnut being Jeremy’s tried-and-true favorite for carving.

Because he built his first banjo, Jeremy thought it was only natural to build his own tools for making them. Jigs for cutting neck pieces and headstocks and forms for shaping rims line a wall of the workshop.

A homemade device in the shape of a small rocket used for pre-soaking wood and the steamer box for bending rims sit to one side. As he refines the manufacturing process for each model, he’s not afraid to branch out: a maple fretboard here, a brass Tubaphone tone ring there and then there’s the curious wooden rim full of holes that’s an ongoing experiment in how changes in air pressure affect the banjo’s sound.

“I always used to say if I could start over, this is how I would do it – things like being very meticulous about my craftsmanship,” Jeremy adds. “I really want to become an artisan.” 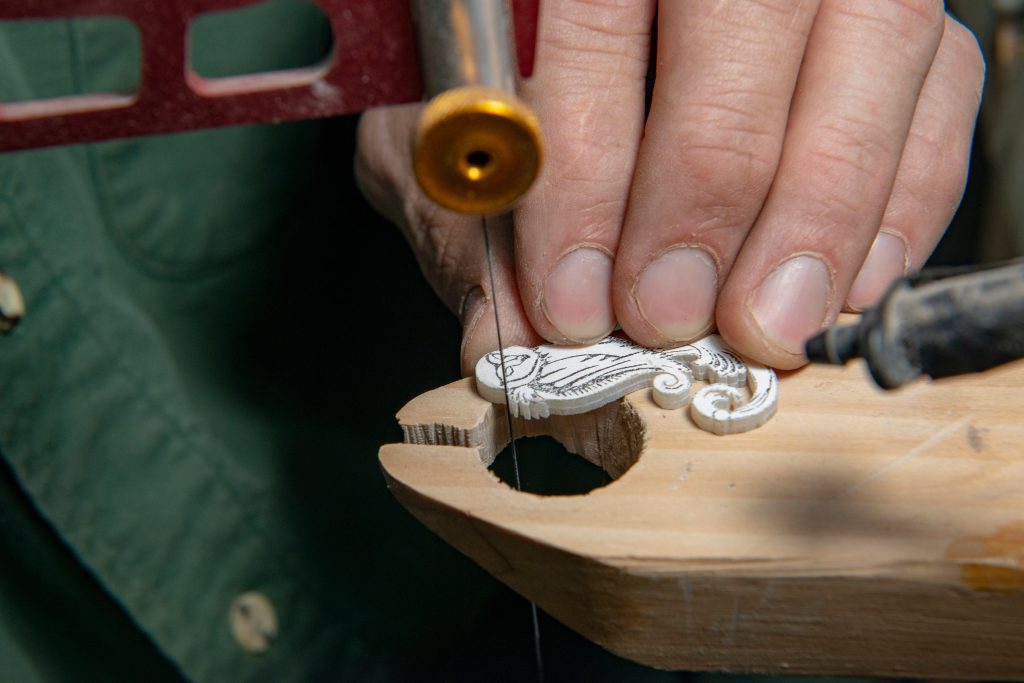 Zach Smith/ Rural Missouri Jeremy cuts the company’s signature snowbird from mother-of-pearl, which will later be added to the headstock of a custom banjo.

Snowbird’s only “off the rack” model is the Little Birdie, which runs $850, although Jeremy hopes to bring the price down as he streamlines his production.

Custom work starts at roughly $1,000 and runs all the way up to $3,200 for something like his own banjo, which features a kaleidoscopic inlay of brass, copper, abalone and mother-of-pearl. The ornate inlay work is a hallmark of Jeremy’s style, and all of the instruments come with a lifetime warranty.

For Jeremy, the idea of building banjos full time would only work if he was also playing. The same path that led him from repairing instruments to creating them is what led him from strumming classic rock riffs and thumbing old Chet Atkins tunes to McClurg.

Learning to play along with Alvie and the other regular musicians in the old McClurg store, a place where old-time music is steeped in musical tradition and homespun charm, was baptism by fire for the novice banjoist. But Jeremy emerged not only unscathed but inspired to improve his craft, both as musician and luthier.

“A lot of people play for years and never get above a certain level,” Jeremy adds. “When you go down there, you get above that level.” 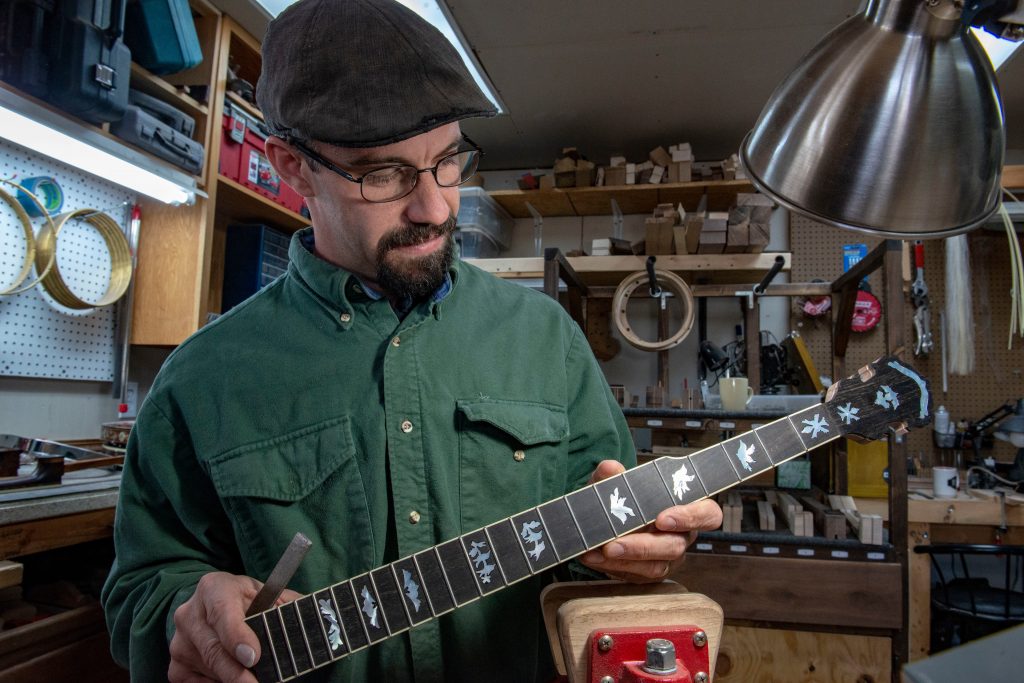 At the same time when he’s ramping up to try building resonator banjos, Jeremy’s wrapping up the recording of his first album. Like building his family’s home and planting a vineyard out back, each accomplishment is a step, in Jeremy’s words, toward, “creating beauty in whatever way I can.”

He’s drawn a lot of inspiration from the Ozark hills, more than just walnut wood and Norton grapes, but also a hard work ethic and the ability to sit back, pick up a piece of those woods and pick out a tune.

Amid the table saws and tone rings, the back window of the shop looks out over the Ozark hills at birds-eye level. It’s a tool just like all of the rest for keeping the artist in touch with his muse.

“If I feel I’m getting burned out, I’ll just look out there for a minute and go off into the ether,” Jeremy says. “It’s inspirational. Here, it just flows.”

View a video of Jeremy playing one of his banjos at tinyurl.com/ava-banjo. 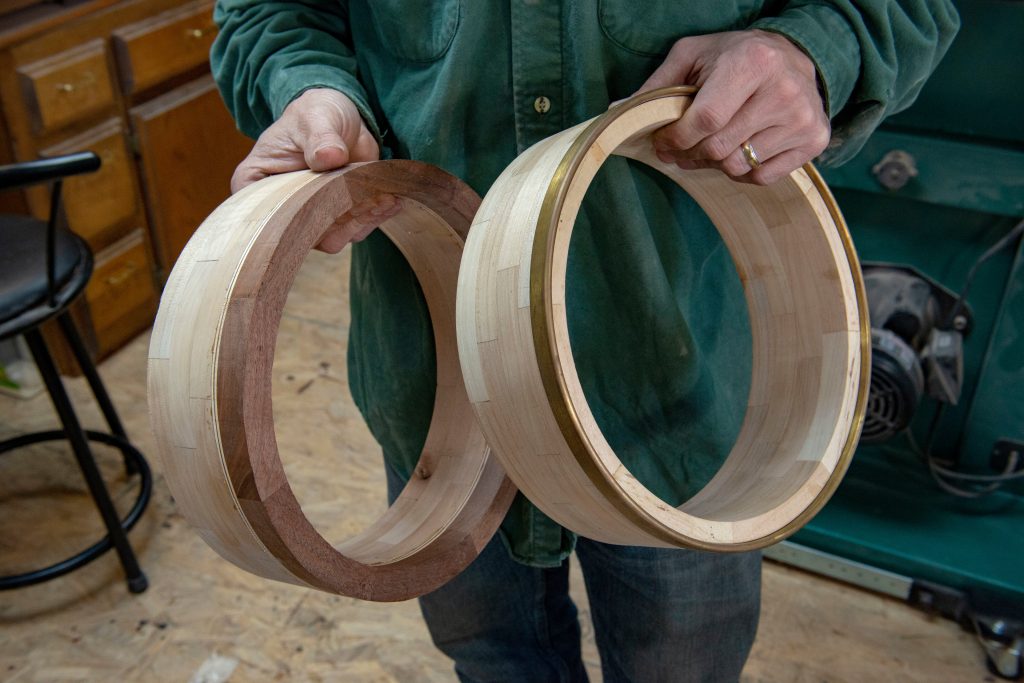