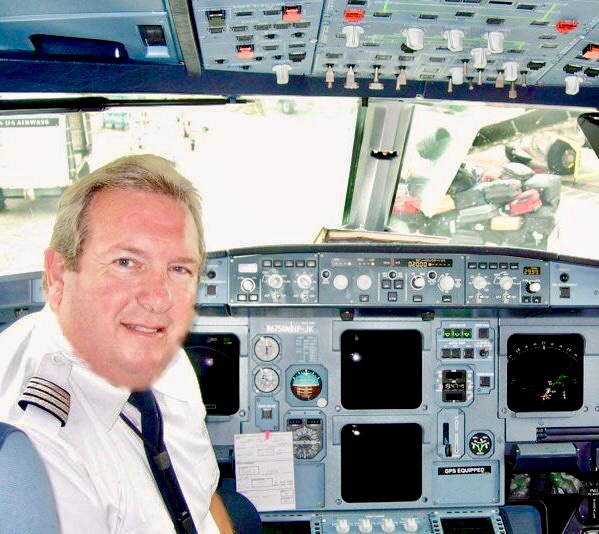 Captain Gene Clinkingbeard, above, retired last week after a longstanding career as a pilot.

After 26 years with American Airlines, Captain Kenneth “Gene” Clinkingbeard piloted his last flight from Sacramento to Phoenix last week before his official retirement. At the conclusion of the flight, Gene received applause from passengers and crew members as he facilitated a smooth landing at Phoenix Sky Harbor Airport, his home base.

Riding on board the Airbus A320 aircraft were members of his family, including his wife, Maryellen; daughter, Lindsey; and son, Michael, who is also a pilot and rode in the cockpit.

As the airplane taxied to the gate, Phoenix firefighters provided the ceremonial “water cannon” salute, as air traffic control employees and other pilots on frequency, voiced congratulations.

Inside the terminal, the soon-to-be 65-year-old captain was met by family and friends at the gate, courtesy of the airline.

Prior to landing at the airport, Captain Clinkingbeard made the following announcement, noting this was his last flight and his family was onboard:

“In row six is my beautiful wife, Maryellen and daughter Lindsey. Maryellen was my flight instructor who taught me how to fly and helped me get my wings. She was such a good instructor and we had so much fun together that we eventually got married. Up front in the cockpit is my son Michael who is a newly hired airline pilot with Compass Airlines. He represents a new generation of young, talented pilots that are taking over the controls as pilots like myself retire.”

Captain Clinkingbeard has had a longstanding career in aviation, for more than 42 years. He is a dual-rated pilot in airplanes and helicopters.  He flew helicopters as an officer/pilot for the Arizona Department of Public Safety, Air Rescue Division. His career also includes flying helicopters for Air Services International, with charters for celebrities like Tom Cruise when he was filming Days of Thunder in Phoenix.

In 1993 he was hired by America West Airlines as an instructor in the Airbus A-320 aircraft and soon after “went to the line” as a first officer.  He saw the merger of America West Airlines with US Airways, and later with American.  His Airbus routes included areas throughout the U.S., Canada, and Mexico.

Now retired, Clinkingbeard looks forward to traveling with his wife, Maryellen, who is also a pilot and former FAA inspector, his son Michael, and daughter Lindsey, who recently graduated with a master’s degree from the Cronkite school at ASU.

When asked by one of his passengers what he was going to do in retirement, Clinkingbeard said “I think my wife has a pretty long Honey-Do list waiting for me….I probably should tackle that first!”

Gene is the grandson of the late Clarence and Inez Clinkingbeard, of Ava, Missouri.