Ava High School senior shortstop Tom Emerich, right, is consoled by a teammate as the Bears following a 4-1 loss to Fatima in the MSHSAA Class 3 State Quarterfinals on Wednesday, May 22, 2019, in Westphalia, Missouri. The game was Emerich’s last as a high school baseball player, the emotion of leaving the team caught in the reflection of his sunglasses. (Jason Hoekema/Douglas County Herald) 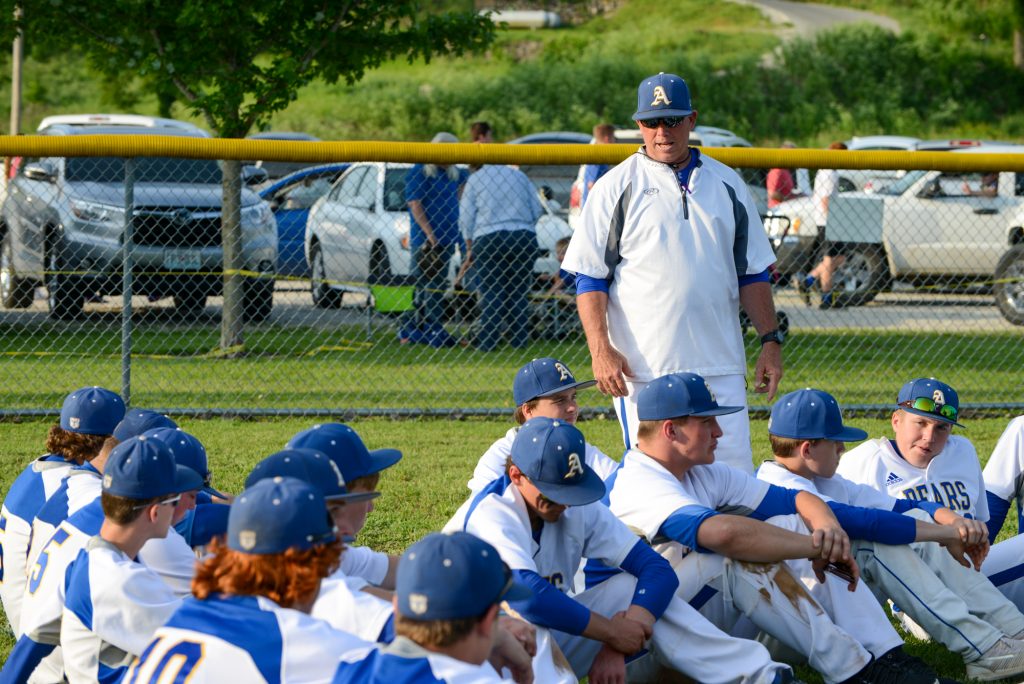 Ava High School athletic director and baseball coach Rex Sawyer consoles the team after a 4-1 loss to Fatima in the MSHSAA Class 3 Quarterfinals on Wednesday, May 22, 2019, in Westphalia, Missouri. (Jason Hoekema/Douglas County Herald)

At the start of the 2019 baseball season, the Bears had only put three batters on base in their 2-0 winning season opener against Van Buren. A blinding number of zeros filled the season’s statistics fields and some of them were true .000s with a large number of underclassmen on the roster.

The win was followed by a 9-2 loss to Hollister at the team’s home opener at Kerr Field. The loss was felt through the fan base who were anxious to see what the Bears had put together with Rex Sawyer at the helm.

Then things turned back around with Ava’s first SCA win with a 15-2 blowout at Cabool. Wins poured in through the start of April through a matchup against Springfield Central where the Bears picked up the 13-1 win for a season record of 6-1.

Then came the longest game of the year – literally. A 14-inning monster that ended with a walk off win for the Tigers. Wins against Houston and Salem brightened things up in what felt like an offensive struggle for the Bears.

In the SCA the Bears remained perfect with a 6-0 record and local bragging rights over rivals like Mountain Grove.

From breakaway wins to tighter margins, the losses started racking up with dropped games against New Covenant, Mansfield, and Bolivar. Going into the district tournament with a record of 15-5, the Bears picked up the fifth seed and were expected to be the underdog against seasoned and state-ranked Class 3 teams in Fair Grove.

This is when things really started getting excited and the Bears picked up a greater number of fans along the way.

Then the elated 5-3 win over top seed Strafford for the district title. The Bears had come from behind and put away top teams in a newly assigned District 11.

With that came growth and exponential potential for a team made of many underclassmen players.

Senior Caleb Johnson started his season with two strikeouts and a blank average and OPS column after three plate appearances against Van Buren. At the end of 24 season games Johnson had improved to a .364 batting average, 1.072 OPS, and one home run. Those numbers earned him a handful of intentional walks during the district tournament.

Batting wasn’t the only spot at the plate where he dominated.

As the team’s senior catcher Johnson caught 11 runners stealing and picked one runner off during this season, earning him a CS% of .355 SCA First Team and Class 3 District 11 Second Team honors as the catcher.

Then on the other end of the pitch, Johnson was selected for First Team All-District ending the season with 49.2 innings pitched and an ERA of 1.128 with 73 strikeouts.

On the infield, Tom Emerich served as this year’s senior fielder. Earning First Team SCA and All-District honors, he finished the season with a .892 fielding percentage with 66 putouts and was part of three double plays.

Emerich didn’t just cut first base off from opponent hitters, he also pitched 15.2 innings over nine games this season. With 20 strikeouts and an ERA of 1.787, Emerich was instrumental on the mound just as he was at the plate.

Batting a .316 average and reaching first in 44-percent of his plate appearances. From there the senior has 24 hits and brought-in 26 runs in his final high school year. He was one of three Ava players who hit a home run this season.

As for the other awardees this season?

All underclassmen, which says a lot about the coming years for the Ava Bears.

Sophomore Bryce Dodson was one of three ace pitchers coach Sawyer had in his strategic rotation. Dodson pitched a total of 36.1 innings, delivering 34 strikeouts through 13 games played this season.

With an ERA of 1.156, the sophomore was named to First Team SCA and earned an honorable mention as a young pitcher in the All-District baseball team.

Also, on the mound was freshman Zach Richard who delivered performances from the rubber as if he were playing as a seasoned high-school baseball player.

After 37 innings pitched over 11 games, the young pitcher had a season-end ERA of 2.270 but managed to deliver 38 strikeouts. Second only to Johnson.

Richard was awarded with All-SCA Second Team honors as a pitcher and was also given an honorable mention in the All-District baseball team honor roll.

Speaking of formidable freshmen, Spencer Skyles was a player to be reckoned with in the outfield. Earning Second Team All-SCA honors and First Team All-District honors, the first-year player ended the season with a .889 fielding percentage.

Robbing several batters of potential double and triple base hits, Skyles was credited with 30 putouts from his spot in centerfield. He also finished the year with a .284 batting average and .655 OPS.

Filling-in the other gaps and holes in the outfield were freshmen Andrew Dalton and junior Carter Campbell.

Campbell spent most game in left field with a .906 fielding percentage, one assist and 28 putouts on deep fly balls that ventured into his territory. He was also one of Ava’s clutch hitters ending the year with the team’s fourth-highest batting average, .308 with 10 runs.

Dalton played impressively in right field, noting several running and diving catches made during the season. With a .943 fielding percentage the freshman was responsible for 31 outs and two assists with rockets back to the infield to many keep runners from turning to second.

Dalton finished the season with a .258 batting average but is best known for throwing the final innings of the district championship game where the Bears took home the crown.

Receiving honors and the lasers thrown-in by the out fielders are sophomore Zack Miller and sophomore Zach Mendel.

Miller finished the season with a .784 fielding percentage manning the sometimes-tricky bounces of balls moving down the third base line. Playing 24 games this season, he finished with the team’s third highest batting average, .309 and .810 OPS.

Miller was the only underclassman to hit a home run this year, and with perfect timing during the district playoff tournament and finished the year with 11 runs and another 15 RBIs. He was given an All-District honorable mention.

First base can be a tough gig to have. Much of the fan base’s relief and anxiety rests in having a capable first baseman who doesn’t just catch the ball but stretches, bends, and does everything humanly possible to keep that back foot on the bag. All without letting the throw get by and giving up additional bases.

Zach Mendel was named All-District Honorable Mention for his work at first with a .842 fielding percentage and 16 putouts and three double plays in his name this year.

Other mentionable players include designated hitter Kayden Myers who brought-in 18 runs, 14 RBIs and ended this season with a .297 average and a .882 OPS.

Also behind the plate and likely to be next year’s starting backstop, Colton Marler finished the season with a .975 fielding percentage, a .158 caught-stealing percentage with a total of 77 outs in his name.

Speaking of stealing, Johnson topped the roster with 19 thieved bases followed by Emerich with 11 and Skyles with 10.

Three roster spots will be opened for the fall 2019 and spring 2020 seasons. With Johnson, Emerich and Garrett Forrest moving on to the next phase of their lives – and we all wish them well in their endeavors as adults – there will be room for three other players to take hold of the key positions filled by the seniors.

Last, but certainly not least, Coach Rex Sawyer was named both All-SCA and All-District Coach of the Year. Although he never received a Gatorade bath this year, the man behind the scenes of the Ava baseball program certainly deserves the time-honored tradition of soaking in the popular sports drink.

Closing the season with a common phrase stated by Sawyer, “there is still a lot of baseball left.” 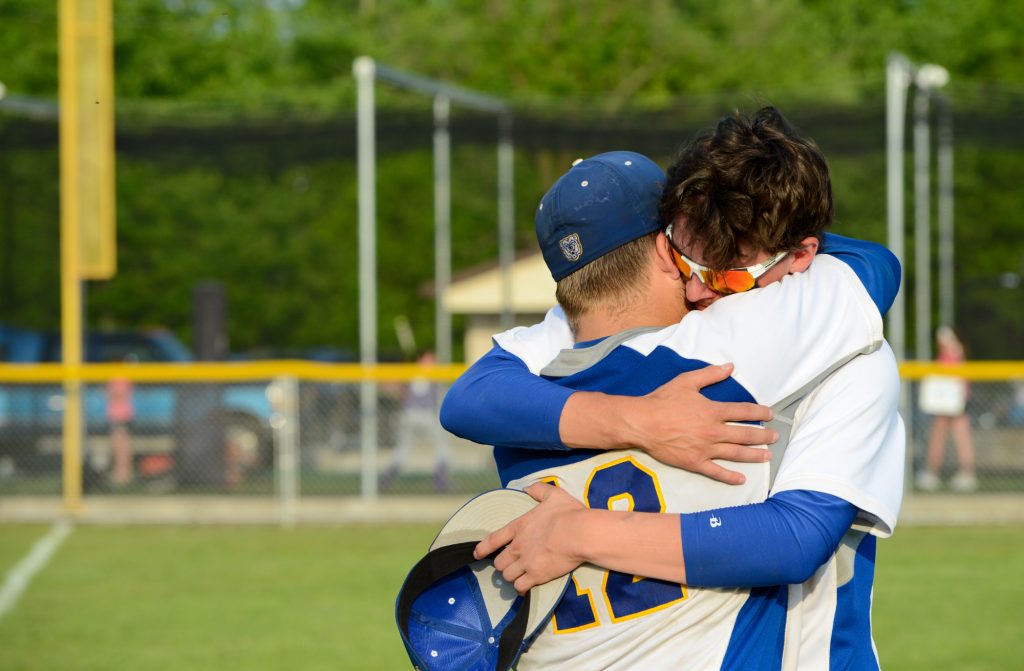