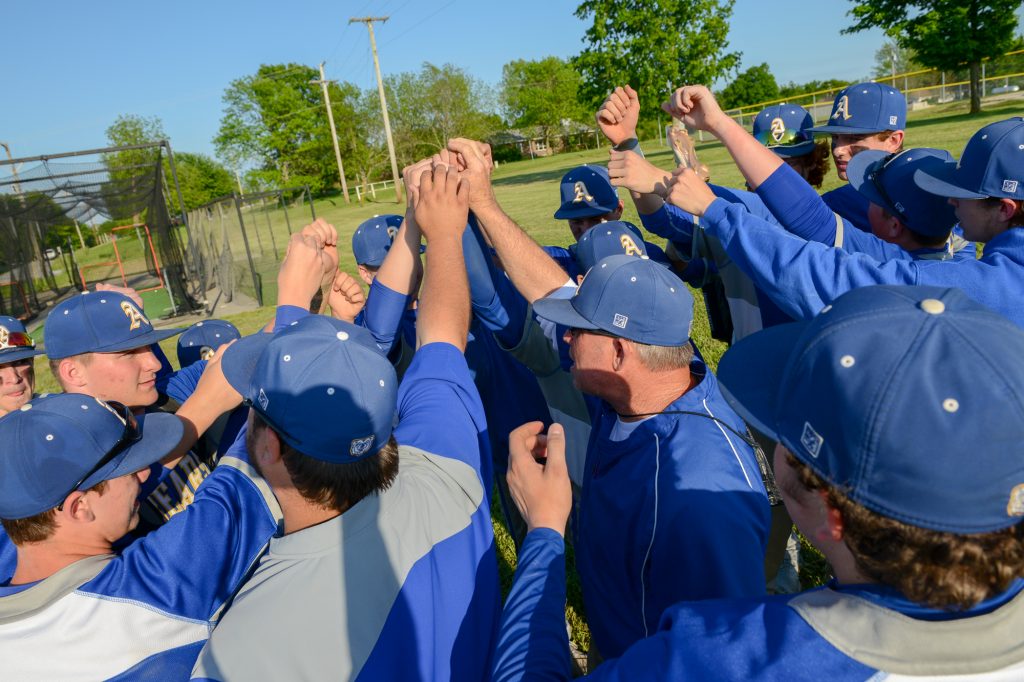 Ava High School has done very well with a 15-5 record  and playing in a district with some tougher schools since their recent shift westward against new opponents. Some of those opponents have slept on the Bears.

“We told the kids we’re a 5 seed in this tournament and that (two teams) overlooked us,” said coach Rex Sawyer. “And we put them put them away.”

Monday kept the Bears going into the post season with a 4-1 win over 16-5 Hartville.

Tuesday sunshine was the scene set for some really, really good baseball against a 20-6 Fair Grove team. Some spectators may not have expected the outcome of Tuesday’s game, but saying that the Bears did alright is a disservice.

It was Michael Jordan who said, “Talent wins games, but teamwork and intelligence wins championships.”

The Bears were working well, and together. Key players went clutch at the right times to create the momentum to turn a 1-0 deficit into a 4-1 win.

“Our kids play hard,” said Sawyer. “We got the execution down when we needed to.”

Freshman Zach Richard (32 IP, 1.299 ERA) held his own on the mound, showing no fear as a first-year pitcher battling against experienced batters. Third in total innings pitched, the young player managed to keep the defense going through seven innings in his fourth game as the starting pitcher.

In a solid performance, Richard served seven strikeouts, allowing just two hits and a single run. This season he has been growing as a pitcher with 33 strikeouts in his first year in the high school diamond. With a WHIP of 1.125, he is second only to senior Caleb Johnson (44 IP, 1.254 ERA) with a .896.

On the flip side of the pitching numbers, Richard has given up 14 runs, earned eight, set up 12 walks and just three hit batters. Considering the season’s statistics of Ava’s ace in Johnson, he will be one to watch for the next four years.

“Zach Richard just did a superb job on the mound for us,” said Sawyer. (He’s) a freshman that went (through) seven innings.”

Outside of the strikezone, the Ava defense was perfect in fielding, managing 24 putouts with no errors all across the field. To highlight the defense, senior Tom Emerich (.892 FPCT) had a leaping grab in the bottom of the fifth to keep Fair Grove batter Gabriel Taylor off the bases in a one, two, three fifth inning for the Ava defense.

The Fair Grove offense were pulling their hits, but a solid defense in the left side of the diamond between Emerich, left fielder Carter Campbell (.885 FPCT), center fielder Spencer Skyles (.862 FPCT), and offensive game star third baseman Zack Miller (.758 FPCT), kept players flying out or failing to beat the ball to first.

Aside from the single Fair Grove run made by Joshua Thompson, no other Eagle had the privilege of touching third base.

Miller was part of two cross-corner putouts at first, Emerich and second baseman Payton Evans (.883 FPCT) were credited with another five plays for Eagle outs at first. In the outfield Campbell gloved three deep flyballs, Skyles another three and one key catch-on-the-run by right fielder Andrew Dalton (.963 FPCT) for the second out at a tied 1-1 seventh inning.

Offensively, the Bears were quiet through five complete innings, ending a perfect no-no game by Eagle pitcher Dylan Long in the fourth with a single by Skyles (.271 AVG, .627 OPS) in his plate appearance. Unfortunately, Skyles was put out on the only double play in Tuesday’s game, where Johnson (.367 AVG, 1.083 OPS) hit toward first and triggered the 3-6 play to end the inning.

Through five it was three-up, three-down for the Bears offense, but Zach Mendel (.235 AVG, .605 OPS) changed the game’s tune when he was walked to first and pushed to second with a sacrifice bunt from Andrew Dalton (.250 AVG, .630 OPS).

In an attempt to keep Mendel from reaching the final 90-foot stretch the Eagles’ first baseman made an erroneous throw to third resulting in a 1-1 tie after Mendel stomped on home plate.

“Andrew Dalton got a bunt down, we moved Mendel and scored because they tried to make a throw over to third,” said Sawyer. “They overthrew it and we scored. I think that got us rolling.”

Emerich was stranded on first on a single to left field when Skyles grounded out in a 5-3 play to end the sixth.

Extra innings was when things got interesting for the Bears. Into the top of the eighth Zack Miller slayed the ball on the full count into deep left-center field.

The sophomore came through with a momentum-shifting hit right when the Bears needed to rally and go -ahead in the game. Mendel once again walked in in his fourth appearance and picked up the second bag on a passed ball by Eagle catcher Rhett Hill.

The Bears have been notorious for going clutch with two down, and that was the case again after Dalton and Richard struck out in the top of the eighth. Cue Emerich with a walk on the full count and second thanks to a single by Skyles.

Johnson sent one deep into right-center for a single, picking-up two RBIs with Mendel and Emerich finishing the diamond for the 4-1 lead.

In the commotion Sktles attempted to put himself in scoring position but found himself in a 5-4 pickle, resulting in the third out.

The damage had been done, in a late-game comeback and go ahead with two insurance runs brought in by Johnson, the Bears were just three outs from continuing their postseason journey into the Wednesday championship match against Strafford who took a 1-0 win over New Covenant following Ava’s game.

Eight, nine, one in the order at the bottom of the eighth for the Eagles and a fresh arm was brought out to close it up. Bryce Dodson (32 IP, 1.254 ERA) took lead of the Ava defense after Richard neared his maximum 95 pitches allowed at the helm, earning him the game ball.

The defense came up with a 5-3 save for the sophomore pitcher, a centerfield snag by Skyles, and as quick as the first five innings moved, a grounder to Evans for the 4-3 play and final out of the game to end the Fair Grove Eagles season at 20-7.

“Bryce Dotson finished it for us,” said Sawyer.  “Don’t count us out, we’re playing good baseball.”

The players, fans, and even coach Sawyer were aglow following the game with Miller getting a big hug from his mother who had celebrated and paced to calm down her excitement after his home run.

“We got some key hits, clutch hits, at certain times and added on (runs),” said Sawyer. It’s always nice to get that extra couple of runs towards the end.”

The game against Strafford will be available in next week’s edition to conclude the Class 3 District 11 tournament. 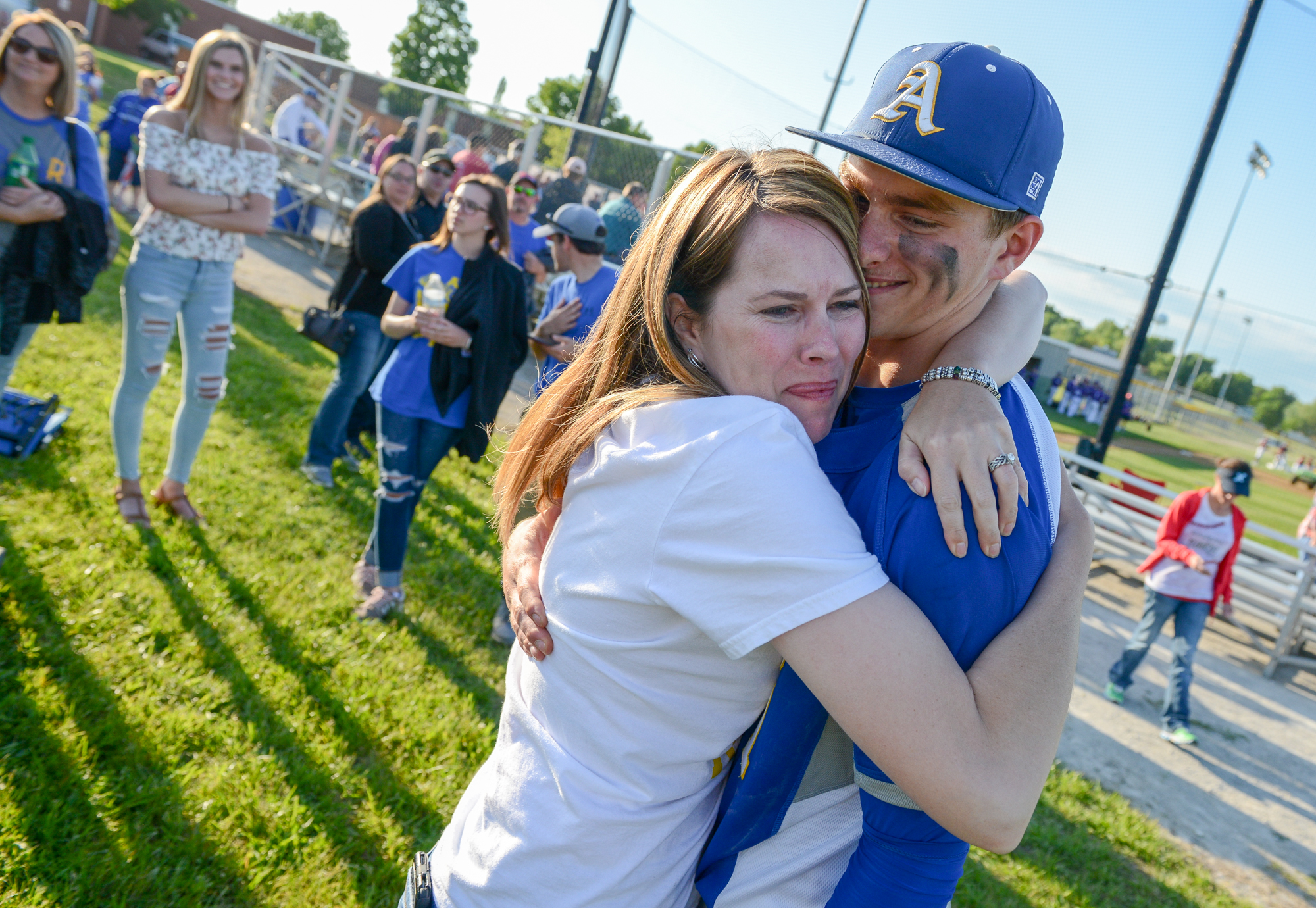 Alicia Degase hugs her son, third baseman Zack Miller, follwing a comback 4-1 win over Fair Grove in the MSHSAA Class 3 District 11 Tournament on Tuesday, May 14, 2019, in Fair Grove, Missouri. Miller, a sophomore, helped turn a 1-1 tie into momentum for a three-run go-ahead win after Miller hit a lead-off solo home run at the top of the 8th inning. (Jason Hoekema/Herald)