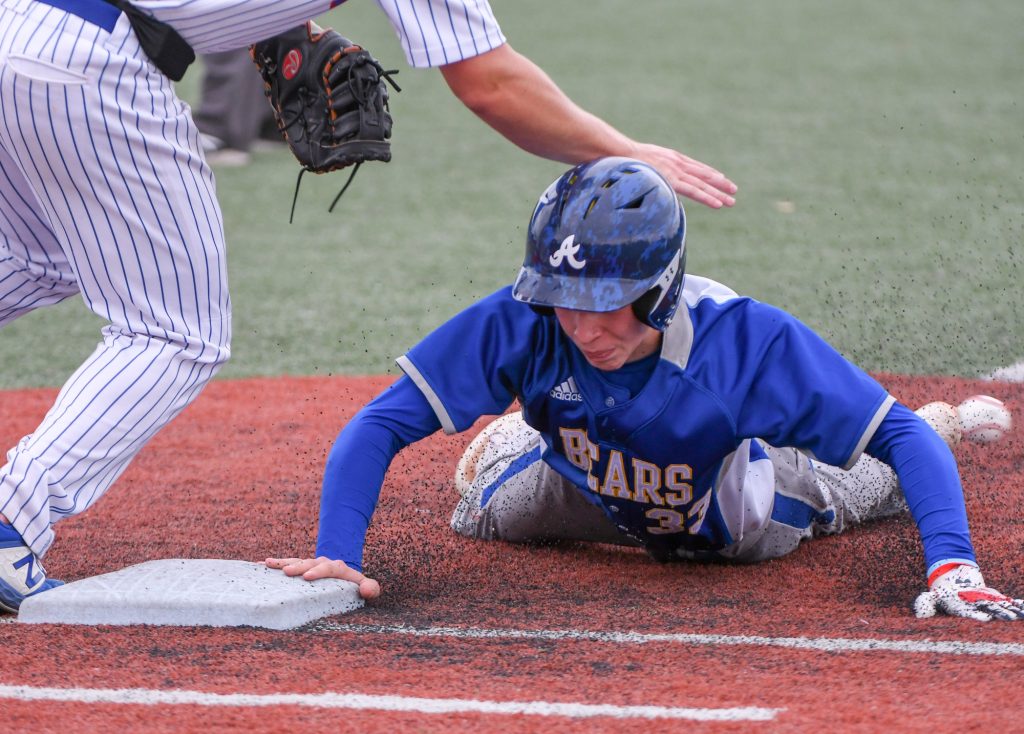 FORSYTH – At the beginning of the season, Ava High School head baseball coach Rex Sawyer told us that he is a small ball kind of coach. It is starting to pay off for the Bears who put some of that strategy to use Monday against the Panthers.

Caleb Johnson (.400 AVG, 1.178 OPS) brought in the fellow senior with an RBI single into left field to crack open the game early with the lead-off batter.

Johnson, now with 17 stolen bases this season, made the third bag on an error after stealing second from the Panthers. Unfortunately, despite the long lead into the final 90 feet of the diamond, he was stranded by a strikeout from Kayden Myers (.325 AVG, 1.025 OPS) and a low-bouncing chopper from Zack Miller (.289 AVG, .741 OPS) to end the top of the first.

Had Miller got a bit more bounce-help from the artificial turf field in Forsyth, it could have turned into an RBI and a two-run lead. Baseballs don’t always do what batters or fielders want them to do, one of the inherent qualities of uncertainty in America’s pastime.

Bryse Dodson (.214 AVG, .603 OPS), who was also at the helm pitching his eighth game with a 5-0 win streak, made first on an error and pinch runner Caleb Brown worked the rest of the diamond with his sixth run this season thanks to an RBI single by Emerich on his second at-bat.

Skyles battled during his second plate appearance camping on the 2-2 count until he whiffed on the seventh pitch to end the second inning for the Bears.

The third inning yielded no runs despite a three-through-eight order, Johnson again reaching third without officially closing the gap on a fielder’s choice on Zack Miller at third for the third out.

Fast forward to the top of the fourth with the Bears leading, 2-1, where Ava was able to break-open the game for a five-run lead. 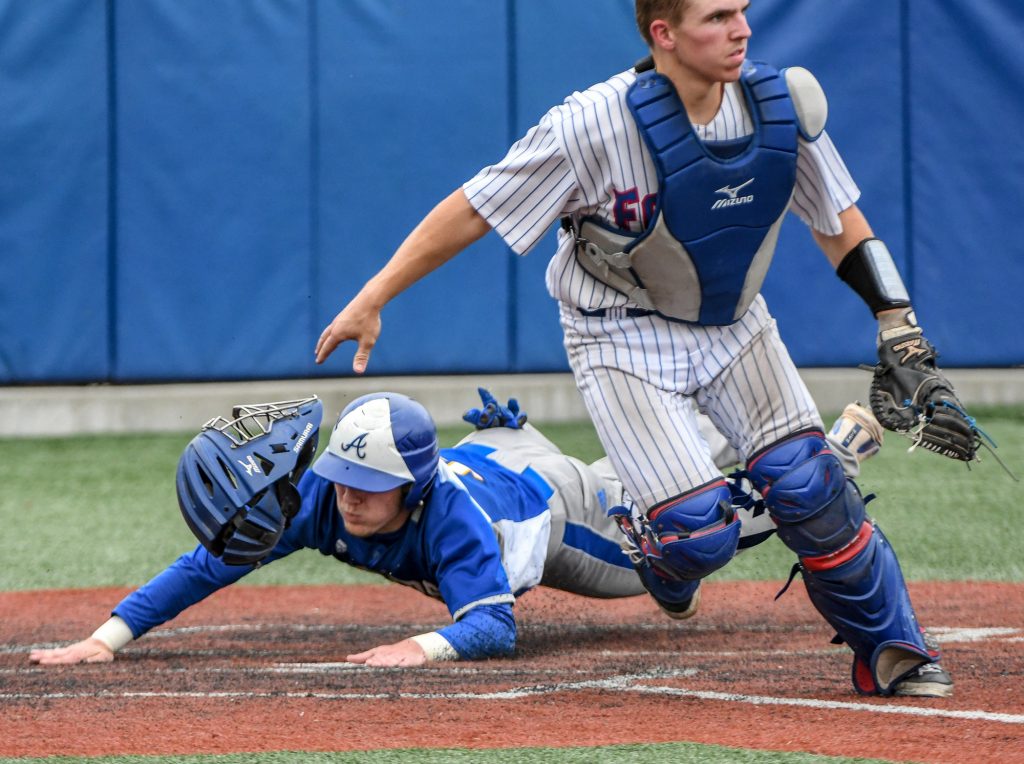 Dodson took a pitch in the back for first base with Caleb Brown pinch-running for the Ava starter. A botched pick-off error led to Brown picking up second and third and would later make his second run of the game on a double into center field from Emerich.

Emerich made third on a single from Skyles, who was 0 of 4 Monday evening. With runners at the corners, Johnson was up at-bat to do some damage.

With a two RBI slide-in triple Johnson was at third for the third time this game, hoping he wouldn’t get left on the pond again. Myers went 0 for 3 in the fourth, caught looking on the fifth pitch.

Another small ball opportunity brought Johnson home for the sixth run of the game for the Bears. Carter Campbell (.390 AVG, .923 OPS) made good on the sacrifice fly into center field for the second out, but another run for the Bears. 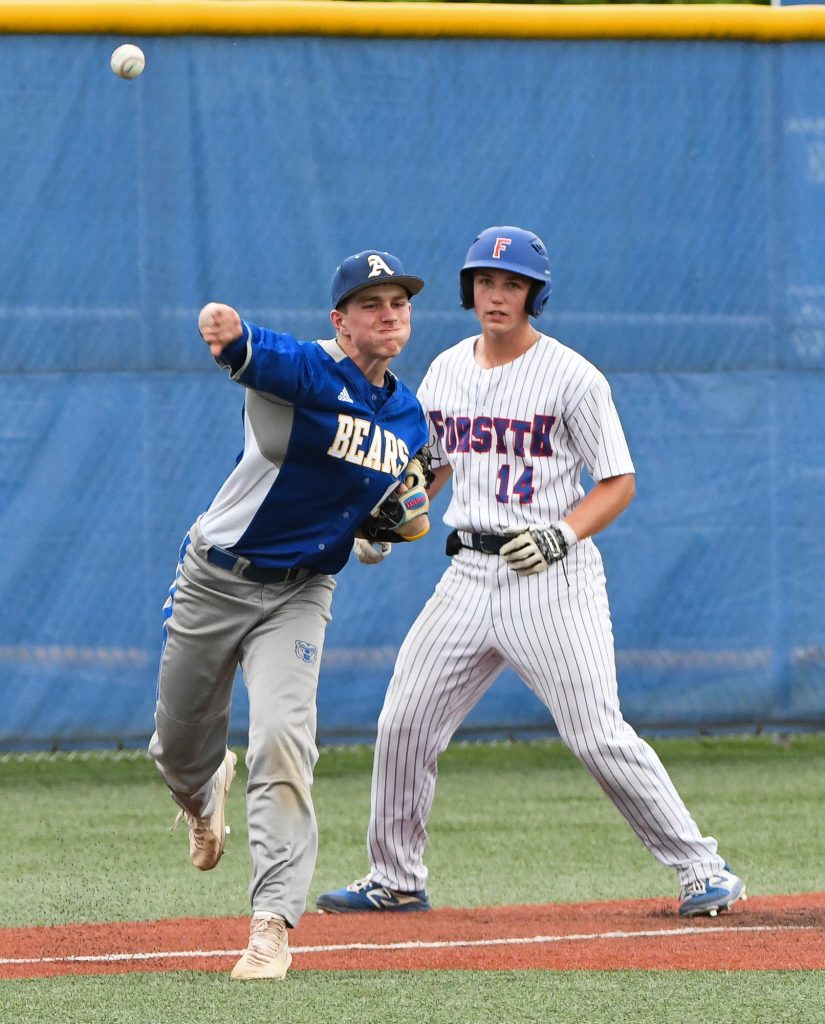 Miller was caught looking at the fourth pitch during his plate appearance, putting him at 1 of 3 against Forsyth. Three up and three down ended the Bears’ offensive attempts in the fifth and sixth innings.

At the top of the seventh, Myers cracked one out to right field for a triple and the seventh run on an RBI double by Miller to left field. Zack Richards (.238 AVG, .619 OPS), who relived Dodson in the fifth inning, ended the night with a whiff.

Managing to keep errors at two and making good in appearances with only six strikeouts, the Bears’ offense was alive and well Monday as the initial signs of foul weather started to loom in the west.

Defensively the Bears overcame a scoring threat in the first with a fielder’s choice put out on Briar Kellem as he made his way to third. Another choice on the Ava defense put out Darrien Woods on his way to second to close-out the first.

The defense found themselves in another tight situation when Jake Jordan was in the final 90-foot stretch, but a collaborative effort picked him off before he could tally-on a run. After that the Bears kept runners away from home, allowing only Keegan Etheridge to reach second on the fielder’s choice situation that put out Jordan.

Things looked bright for Dodson (1.024 ERA, 27 IP) after giving two batters strikes to stare at. Woods was able to grab a chunk on the 1-1 pitch with a line drive into left field for a single. A costly error by the Ava defense led to Woods spinning his wheels around third to pick up the only Forsyth run of the game on an overthrow to first.

Jordan was put out at second on yet another fielder’s choice play for the third out ending any offensive change the Panthers could muster.

Fly balls, grounders and another third base scare after Kellem walked to first, made second and third but was left hanging on a grounder by Woods to seal the Panthers’ fate. The sixth and seventh were three-up and three-down for the Panthers with Zack Richards (1.944 ERA, 18 IP) closing strong with two strikeouts and a defensive effort which ended the game when Ethridge was caught stealing third for the final out and a 7-1 win for the Bears.

Catching up on pitching stats, the Bears have thrown for a collective 110 innings over nine pitchers used this season. Leading the effort on the mound is Johnson with 33.2 IP and Dodson following suit with 27.1 IP. The Bears have left 93 opponent runners on base this season, caught 12 stealing, but also allowed 33 stolen bases this year.

On the other end of the throw, four catchers have played behind the plate, again lead by Johnson with 66 innings behind the batter and has caught nine runners stealing with the arm he uses to work the mound.

Colton Marler is second in the ranking with 34.1 innings and two runners caught stealing. In the field the Bears have had a total of 379 chances to make the out and have made the play 329 times with five double plays and ten assists this season. The one glaring statistic is the 40 errors committed this year making the Bears a cumulative .894 FPCT through sixteen games.

At the top of the fielding board is freshman Andrew Dalton (1.00 FPCT) with 17 putouts, two assists and one double play with his name on it. Corey Heinlein (1.00 FPCT) is also perfect early in his high school career with five putouts. Reece Adams is also on the list with seven putouts and one assist.

Batting, the Bears are averaging .279 across the roster with a .771 OPS and averaging a QAB percent of 41.865. The Bears advance with a record of 12-4 but remain perfect in the South Central Association Conference at 6-0 with only Willow Springs left to play on May 9 just before the district tournament is scheduled to begin.