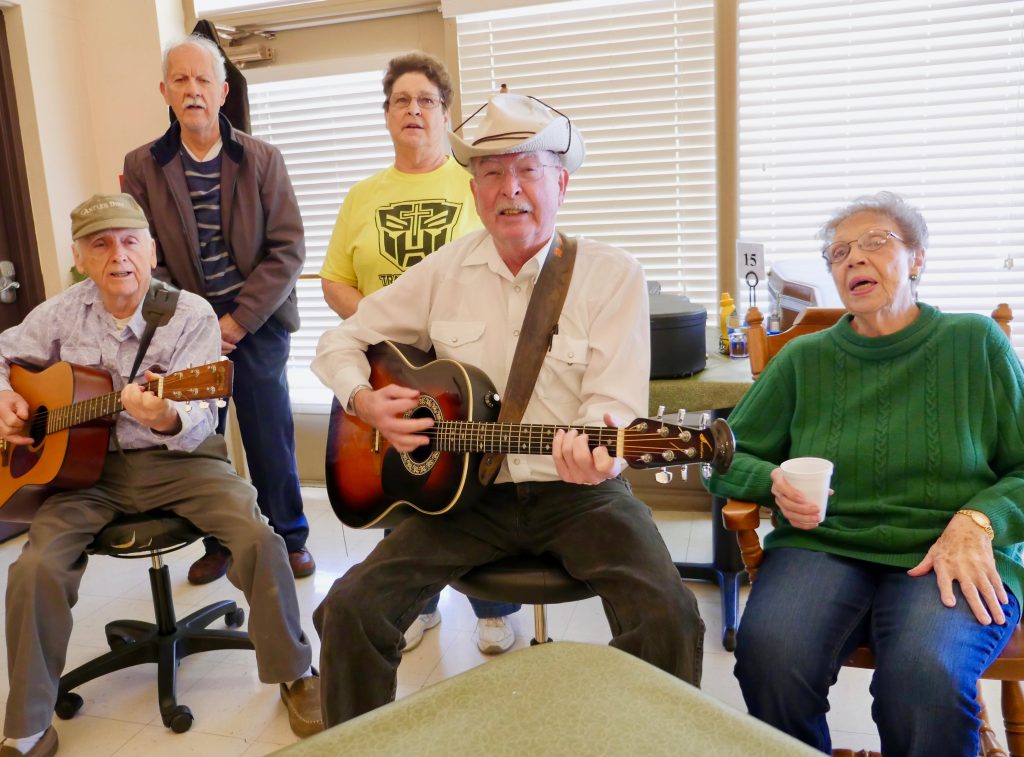 The SonShine Group during a recent performance at Heart of the Ozarks Healthcare (HOTO) in Ava. Members are (left to right) Jim Porter, Max Cline, Sharon Stewart, Edgar Stewart, and Peggy Miller.

The exact number is lost in time.

HOTO Activity Director Connie Burris says the SonShine Group has been playing music every Friday at the Ava Heart of the Ozarks (HOTO) facility for 26 years.

As they banter back and forth, going through a roll-call of the previous HOTO volunteers, residents, and activity directors they remember, however, it’s clear.

The numbers matter less than the people.

But Sharon ducks out once a group photo is taken.

“I can’t sing,” she says. “I’m just a supporter. I talk a lot too. Especially if I know the resident.”

“That’s her talent,” agrees Edgar with a grin. “Talking.”

“Sharon does more than that,” says Connie Burris. “She and I go down the halls, gather up the residents and bring them down. And she looks after the residents. Like Tom over there? He’ll say ‘I need a cup of coffee’ and Sharon will get it. Is it her job? No, but she just goes and does it.” 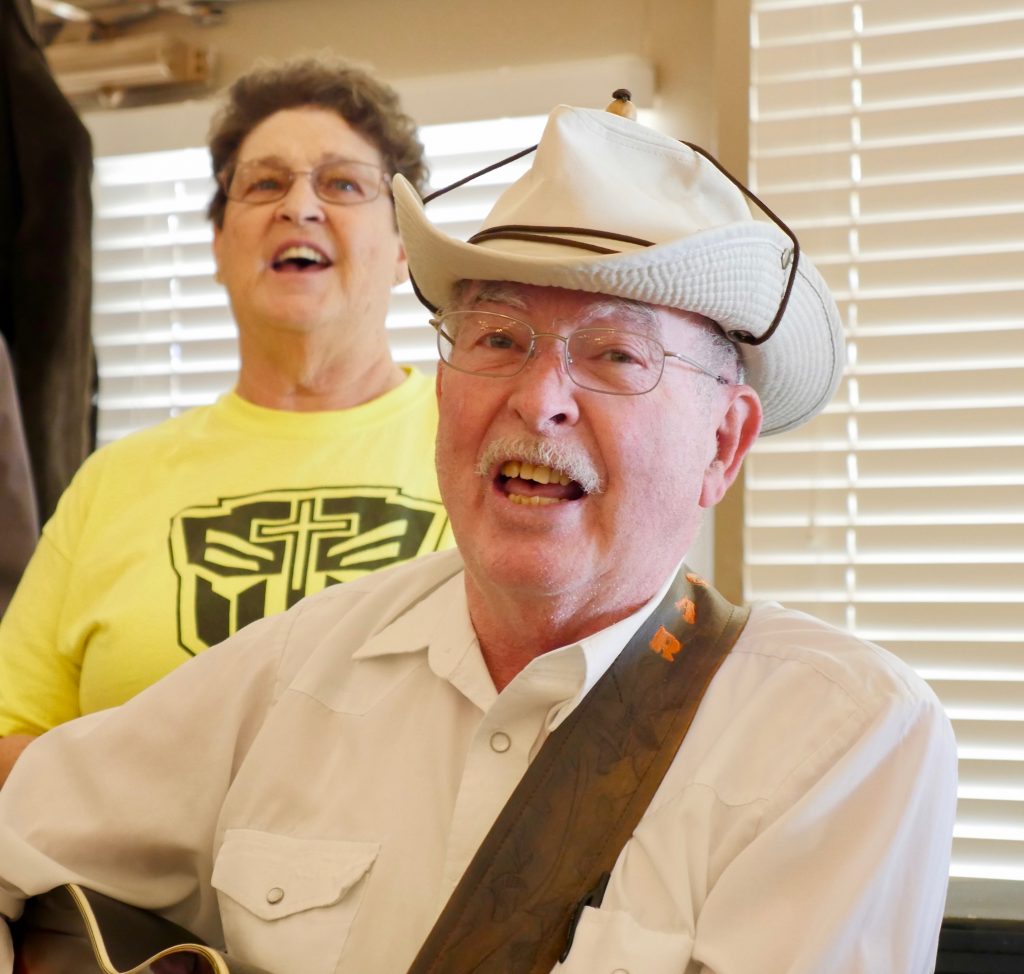 Sharon and Edgar Stewart perform recently at the Heart of the Ozarks Healthcare facility in Ava, MO.

So who’s making the music?

“I’ll go down the halls and call out that the Guitar Man is here,” says Connie. “And they’ll say ‘Oh, Edgar is here!’”

“I’ve been playing the guitar as long as I was big enough to carry one,” says Edgar.

He ended his career at General Motors expecting his retirement to mainly consist of hunting and fishing back in the Wasola area.

“We went fishing and hunting for maybe the first year,” laughs Sharon. 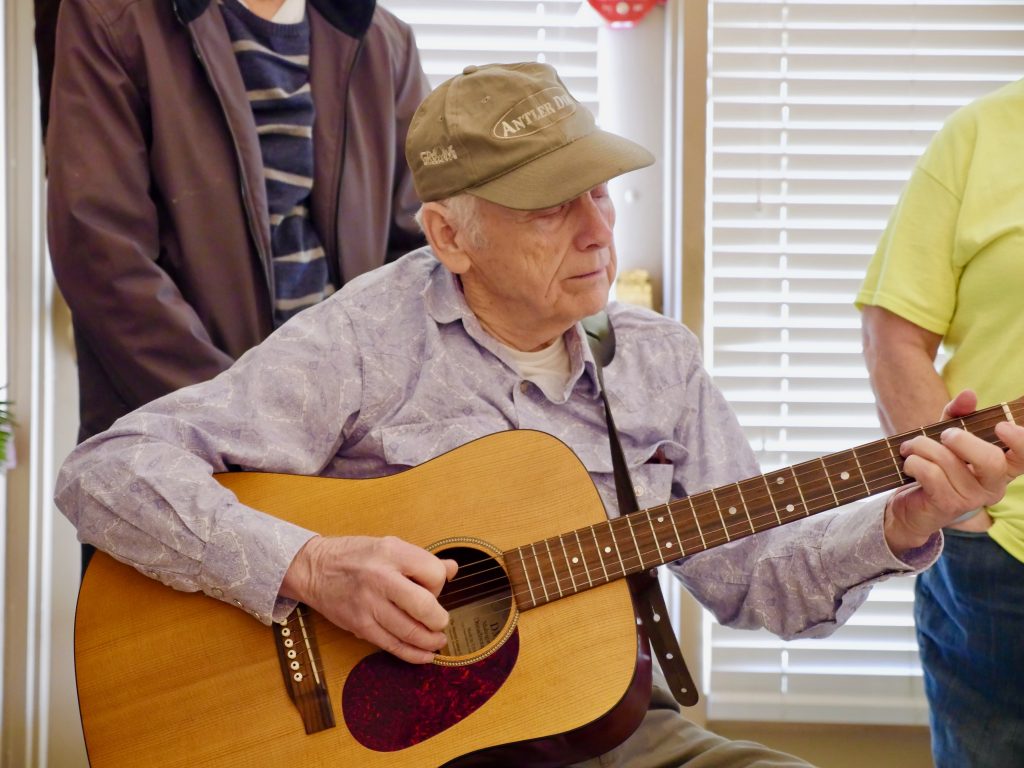 Jim Porter plays his guitar during a recent performance at the Heart of the Ozarks facility in Ava, MO.

“You don’t ever retire,” says Connie. “Because if you retire you get old.”

“That’s something I have found out,” agrees Edgar. “I knew people that retired from GM and died six months later. I retired after 22 years and we haven’t slowed down any. We just keep going.”

Edgar brings more than just pickin’ to the SonShine group. He also brings the grinnin’.

“Do you know how to tell you are getting old?” asks Edgar, holding back a smile. “When you sit in a rocking chair and can’t get it started.”

“They do jokes like that,” says Sharon with eyes rolling.

“We have fun when we come in here,” nods Edgar. “To cheer them up.”

But the jokes aren’t only to get grins.

“They’ll joke between themselves,” says Sharon. “But then they’ll work devotions into the humor.”

Sometimes we’ll tell them about Moses,” says Edgar. “Sometimes about Noah. Or we’ll ask them ‘Who was that guy  that went to Nineveh?’”

And who, exactly, is we?

And Edgar Stewart has Jim Porter.

Jim is a recent addition to the group, with only eight or nine years under his belt.

Originally from Girdner, Jim returned to the area after 40 years in the logging industry in Oregon.

“My hair changed colors out there,” says Jim with a straight face. “So thought I’d come back and see if it would change back.”

In addition to playing the straight man, Jim plays guitar and sings.

Sensing our time was ending, Connie leans in.

“The thing I love about these guys,” she said, “is the way they treat the residents. They hug them, they pray for them, and they let the residents know they love them.”

“And once in a while I scare them!” laughs Edgar.

“They always finish with the song Do Lord,” explains Connie.

“The song says ‘I took Jesus as my Saviour, did you take him too?’” adds Sharon.

“And when I get to the last verse or so I’ll shout ‘Hallelujah!’” says Edgar. “I tell them I put them to sleep, so now I need to wake them up.”

“Some of them about have a heart attack when you do that,” grins Jim. “They all kinda bounce, you know.” He avoids the playful swats aimed in his direction.

Then the clock ticks 10:30, and talking time is indeed over. Behind us, the room has filled in with HOTO residents, anxious to hear the group sing.

Jim and Edgar strap on their guitars.

The other singers line up with them, and for at least the 1145th time over the last 22 years, the room fills with music about mansions located just over the hilltop.