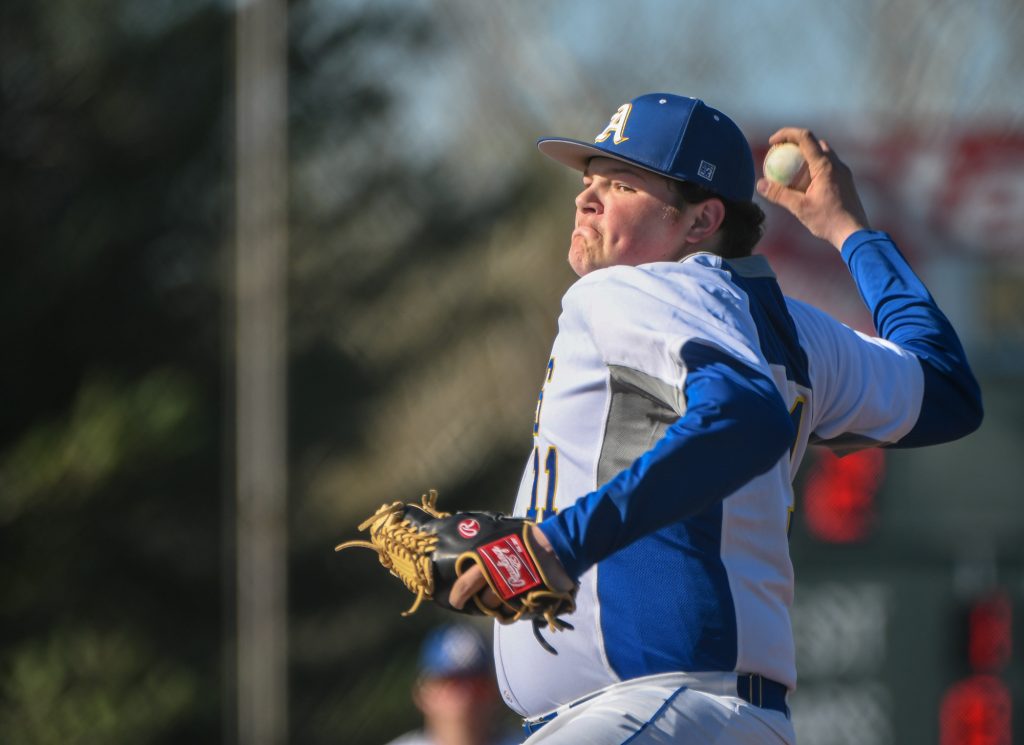 With opener Bryse Dodson (1.615 ERA) having an off-day, things looked sideways after Salem High School lead-off batter Reese Dodson was walked to first on the 3-1 count. Second batter Boone Schrader reached on an error and third batter Noah Leathers made it on-balls.

In the first three Salem appearances, the bases were juiced with the designated hitter on deck. Salem’s Baylor Petty threatened to put the Ava Bears in a deep, deep hole very early in the game.

Petty got a piece of it but flied-out on a hustle by catcher Caleb Johnson (.982 FPCT) for the first out. With one down and three on, Ava was not out of the woods yet.

Salem’s Jordan Shults flied-out to right field, allowing Dodson to make the first run for the Tigers. The top of the inning closed with a 1-2 whiff by Silas Wulff.

Hoping that the start at Kerr Field was just a quick slump, the Bears were disappointed with a three-up-three-down bottom of the first with Johnson getting picked off at third on a deep ball to left field as he attempted to put Ava on the board.

The second and third innings fared no better for the Ava bench with a 4, 5, 6 second while Salem picked-up an additional two runs – giving Bryce Dodson two earned runs and a relief from Tom Emerich (1.077 ERA) at just two and one-third innings into the game to strand two runners at the top of the third.

The bottom of the third continued to build some frustration in the Bears’ dugout with Zach Mendel and Andrew Dalton failing to reach. Zach Richard touched first thanks to an error by Tiger shortstop Garrett Connell. Returning to the top of the Ava order, Emerich (.382 AVG, .488 OBP) lined-out to left field to close the third, stranding Richard.

A 4-3 play and two strikeouts from Emerich ended the Tigers’ attempt at scoring with Reese Dodson getting as far as second on an error and then a wild pitch. Petty wat caught looking to transition the inning and open the game-changing tide for the Bears.

Bottom of the fourth and centerfielder Spencer Skyles (.242 AVG, .324 OBP) reached first on an error followed by a fumbled grounder off Johnson’s bat. Ava designated hitter Kayden Myers got the walk on a 3-1 pitch from Schrader.

Bases loaded and Ava batting ace Carter Campbell (.483 AVG, .515 OBP) squared-up with the Tiger defense. On the 0-1 pitch, Campbell makes a short hit but reaches on the botched fielder’s choice attempting to pick-off Skyles at home.

Another fielder’s choice off the bat of Zack Miller (.233 AVG, .378 OBP) led to Miller on first and Johnson reaching home with Myers in-tow to flip the game on Salem, 3-3.

Zach Mendel got the RBI when Campbell made home for the go-ahead run, but an odd not-so-double-play caught Mendel at second and cut-off Miller before he could make it home.

Tom Emerich, who went one of four Monday, flied-out to center field to close the inning. The Bears had done some damage, scoring three plus the go-ahead in the bottom of the fourth.

After the 4-3 swing in the fourth, Ava came onto the field with a renewed confidence after a slow and uncertain start. The Tigers attempted to rally back in the fifth, but Emerich was able to get a strikeout and let the defense do their jobs with a 6-4 pickoff at second and a fly-out to centerfield to strand two Salem baserunners.

Skyles, who went two-of-four at the plate, got a piece but a 6-3 play by the Tiger defense kept him off base in his third appearance.

Cue senior swiss-army knife player Caleb Johnson with a reach at first in spite of hitting an infield ball. A steal to second and Johnson was in position to score with his wheels.

Designated hitter Kayden Myers hit a line-drive over the shortstop and into a hole in the left field to bring-in Johnson for an insurance run. Campbell reached on a botched outfield play by the Tiger centerfielder.

Zach Miller got a good chunk of the ball at his third plate appearance but was ruled out by the umpire with the infield-fly rule for out number two. Mendel reached first on yet another Tiger shortstop error, loading the bags for the Bears.

Dalton swung and pushed-out a grounder. Unfortunately, it rolled right to the glove of the Tiger first baseman, Theron Southworth, who tagged first for the third out as the Bears extended their lead to 5-3 over the Tigers.

At the top of the Tiger order, Reese Dodson had reached on his previous three appearances and his fourth was not going to be any different.

For the third time, Dodson was walked to first setting Emerich up for an earned run. Dodson made second on a single from Schrader who knocked a liner out into a hole in left field.

After a fly-out to centerfield, pinch-hitter Luke Morrison smacked one out to left field for RBI Single. An RBI double by Tiger batter Eli Wethy brought-in a second run to knot the game at five at the top of the sixth. The Ava defense scuttled the Tiger rally with a pick-off at third and a third out on a liner to Ava leftfielder Carter Campbell with two-on after Emerich walked Wulff on the full count.

Into the bottom of the sixth, the Bears needed runs and some insurance all in just half an inning. The fourth error by the Tiger defense put Richard on first and Emerich came-to with a hit past the Tiger shortstop, advancing Richard to second.

Small ball bunts have been a thorn in the Ava Bears’ paw, with bunts failing to deliver when the offense needed to push runners into scoring position.

On what may have been intended as a sacrifice bunt, Skyles makes it to first to charge the bases late in the game.

Caleb Johnson, who was on-point Monday hitting in all four appearances with two runs, was due for a clutch play.

A deep, deep floater hit the ground just shy of the centerfield fence for an RBI triple credited to the senior.

With the Ava DH making his fourth appearance, reaching twice with one run, Myers took the sacrifice to bring-in Johnson for Ava’s ninth run of the evening. Campbell got caught looking for the second out, but the Bears almost went through the order, stranding two but deflating the Tigers as they went into the last-ditch effort to rally at the top of the seventh.

Johnson (.276 ERA) shed his pads and took to the mound in his sixth appearance as a pitcher for the Bears. With two wins, two saves and only one earned run this season the senior was again due… this time on the mound at the defense’s helm.

The Tigers’ Southworth was first-up, getting a grounder toward Richard who bolted the ball to first baseman Zach Mendel. Mendel made an impressive stretch, nearly splitting as he kept a foot on the bag and the ball in his glove for out one.

Johnson picked-up the bouncer near the mound and tossed it with time to first four out two and sealed the game with a solid 0-2 called strike to complete the books in six and one-half.

As of Monday, the Bears are now 8-2 overall and undefeated with a 3-0 SCA Conference record with wins over Salem, Mountain Grove, and Houston. 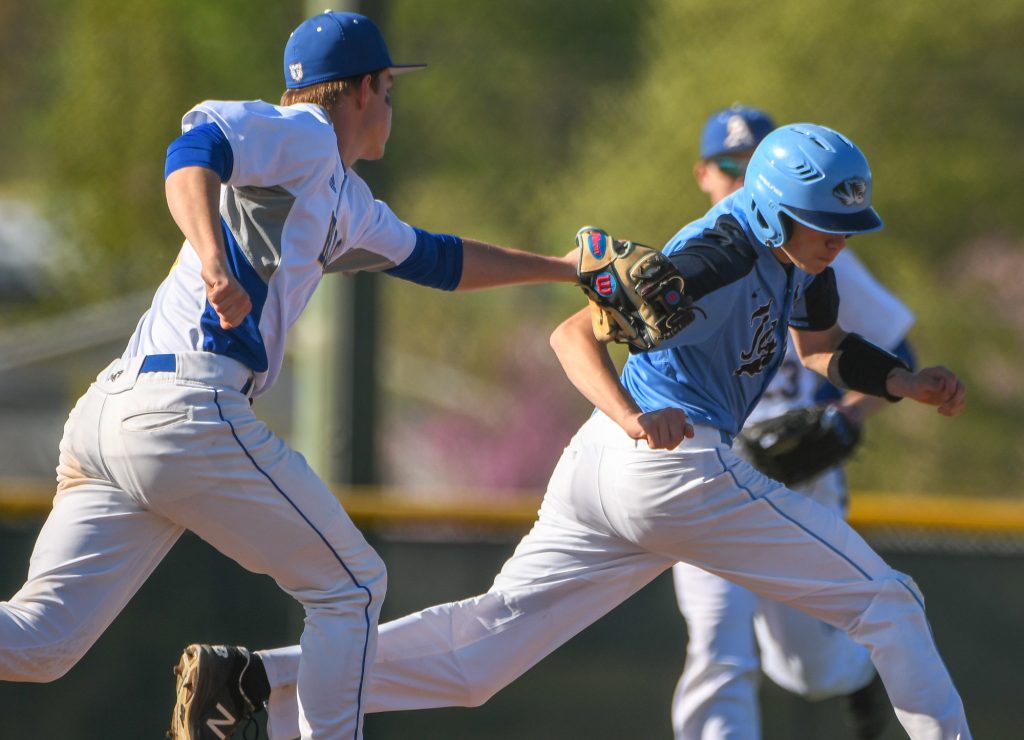