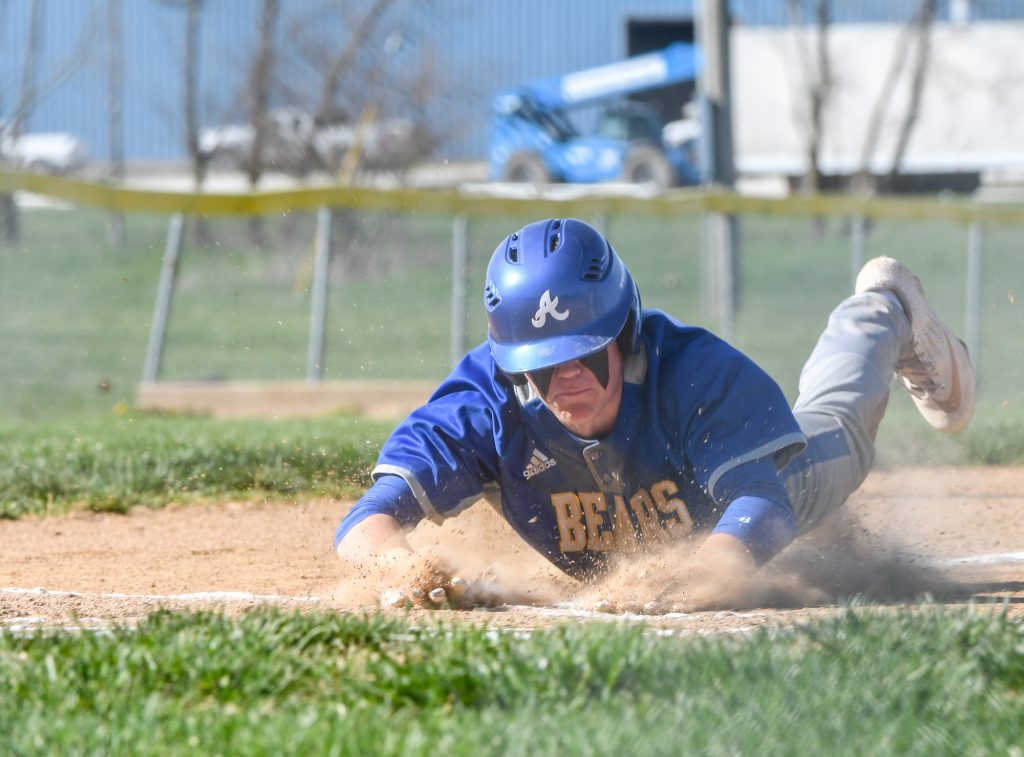 Ava High School baserunner Spencer Skyles (14) slides into home plate for the first run in a non-conference, non-district game against Seymour on Tuesday, April 9, 2019, in Seymour, Missouri. Skyles reached in two of his six plate appearances against the Tigers and scored on a wild pitch in the first inning. (Jason Hoekema/Douglas County Herald)

SEYMOUR – Everyone loves a walk-off win, as long as you’re the winning team. On the other side of that coin is a stinging loss, this one cutting deep after a 14-inning marathon game between the Ava Bears and Seymour Tigers.

It was a fumbled ball in the bottom of the 14th inning which brought the four-hour and fifteen-minute game to an undesired end.

The Bears were in a healthy lead after opening the game with a run on a wild pitch by Spencer Skyles. The Tigers answered with one of their own thanks to an RBI Single by Brady Brooke that brought-in Tiger baserunner Truman Hosiner in the bottom of the first inning. 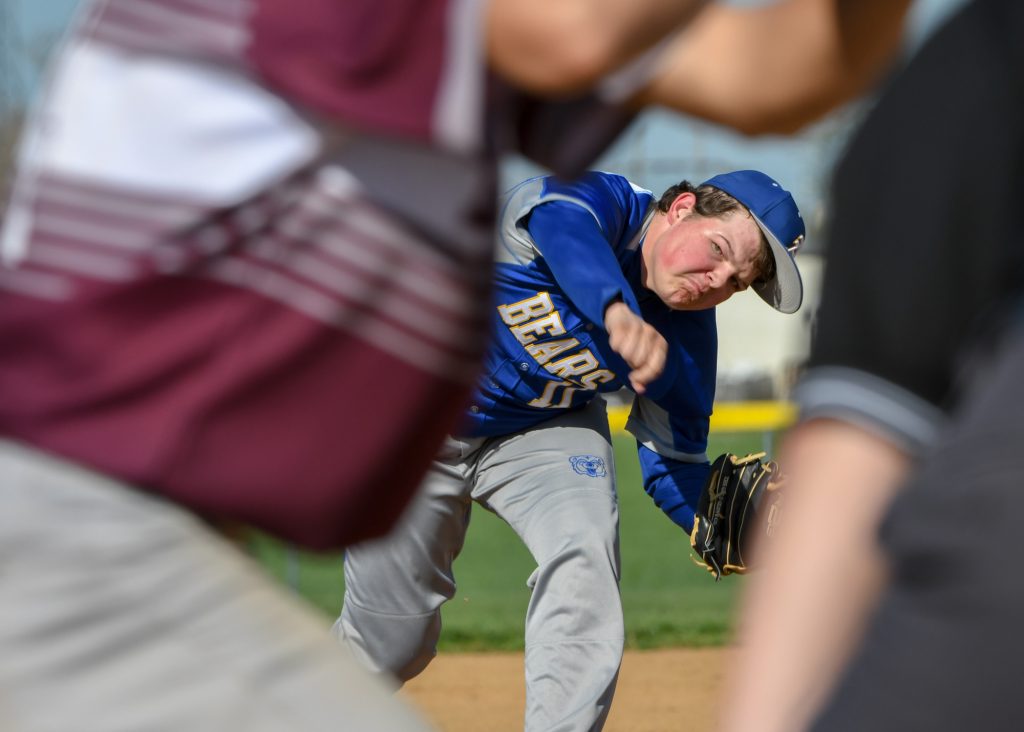 Ava High School opener Bryce Dodson delivers a pitch during the bottom of the first inning in a non-conference, non-district game against the Tigers on Tuesday, April 9, 2019, in Seymour, Missouri. Dodson pitched a total of three and two-third innings and managed two strikeouts. (Jason Hoekema/Douglas County Herald)

Ava opening pitcher Bryse Dodson started well for the Bears, picking up two strikeouts in the first two innings. The Ava defense kept runs to just one at the end of the second with a clutch 8-2 play at home with a rocket from centerfielder Skyles to Caleb Johnson who got the tag for the third out.

Tied at one, the Bears has a 1, 2, 3 top of the third and were able to pull themselves out of a scary situation when Johnson, Dodson, Zack Miller and Tom Emerich put Tiger baserunner Truman Hosiner in a pickle on the last 90-foot stretch of the diamond.

Brady Brooke made good of the situation, able to earn extra bases after reaching first on a single to right field. In scoring position at third, Brooke was left hanging when Nathaniel Hosiner flied-out to first baseman Zach Mendel to end the third.

Kayden Myers scored in the top of the fourth thanks to an RBI Double from Carter Campbell who reached on five of his seven plate appearances. Unfortunately, a 1-6-3 double play by the Tiger defense helped end a bid for more runs in the fifth, putting Emerich and Dodson out.

At the top of the sixth, Johnson flied-out to second followed by a base-on-balls by Kayden Myers. A couple of errors made by Tiger first baseman Keaton Owens led to Myers reaching third with Zach Miller in-tow.

An infield grounder and a hesitation on the fielder’s choice made the run possible with Myers scoring his second. Miller advanced to second and Campbell made first thanks to the second-guessing defense.

Miller and Campbell both made it home after an error by the Tigers’ first baseman put Zach Mendel in scoring position at second. The sixth run would not happen with a 4-3 play to put Dodson out at first ended the top of the sixth with the Bears ahead, 5-1.

With only one at-bat for the Tigers in the bottom of the sixth with a double by Brock Pearce, the Bears retired the next three to end the sixth and put the win in sight.

Tom Emerich was put out by a 5-3 play from the Tiger defense after reaching a full count at the top of the seventh. Skyles got caught looking in his fourth appearance but some luck came when Johnson wore a pitch on the shoulder to reach first followed by Myers on-balls.

Contact with the ball by Zack Miller caused the forced-out at third to end the top of the seventh and put the Bears in the home stretch… so we thought.

Tigers at the top of their order in the seventh, Eric Helms flied-out to right-fielder Andrew Dalton who had already made two clutch catches in the fourth and fifth innings.

Ava High School’s Tom Emerich is all smiles in his first plate appearance during a non-conference, non-district game against Seymour on Tuesday, April 9, 2019, in Seymour, Missouri. Emerich knocked-out his first 2019 season home run in the 13th inning against the Tigers. (Jason Hoekema/Douglas County Herald)

Emerich relieved Dodson in the fourth inning and had done a decent job until the pitch count caused some commotion. Dodson was put back in at the bottom of the seventh to save Emerich for today’s game against Houston, but the change at the mound would prove to be the Bears’ undoing.

Emerich hit Tiger batter Carson Sturdefant and was swapped-out with Dodson who threw and got a line drive from Truman Hosiner to left field driving Sturdedant to third.

Dodson gave up another hit to left field off of Brady Brooke’s bat who picked up two RBI’s and made it to first on an Ava error at first base. Nathaniel Hosiner slammed another out to left field for a triple and the tying run when Brock Pearce made the RBI single to tie the game.

At the end of seven and tied at five runs each, the Tigers and Bears needed to figure out how to finish the game on top.

The Tigers had an obvious advantage: hits. Through 14 innings Seymour racked-up ten hits. Many of those attempts never converted into runs, but it would only take one to walk-off with the win.

Caleb Johnson was called to the mound to try and save the game from the slump of a seventh inning for the Bears. Picking up six strikeouts during his long-lived tenure on the mound, it was in the bottom of the eleventh that the Bears needed some help and motivation.

Coach Rex Sawyer called for the intentional walks of Brooke and Nathaniel Hosiner to juice the bases. Back-to-back strikeouts by Johnson closed the eleventh inning with high hopes for the Bears. 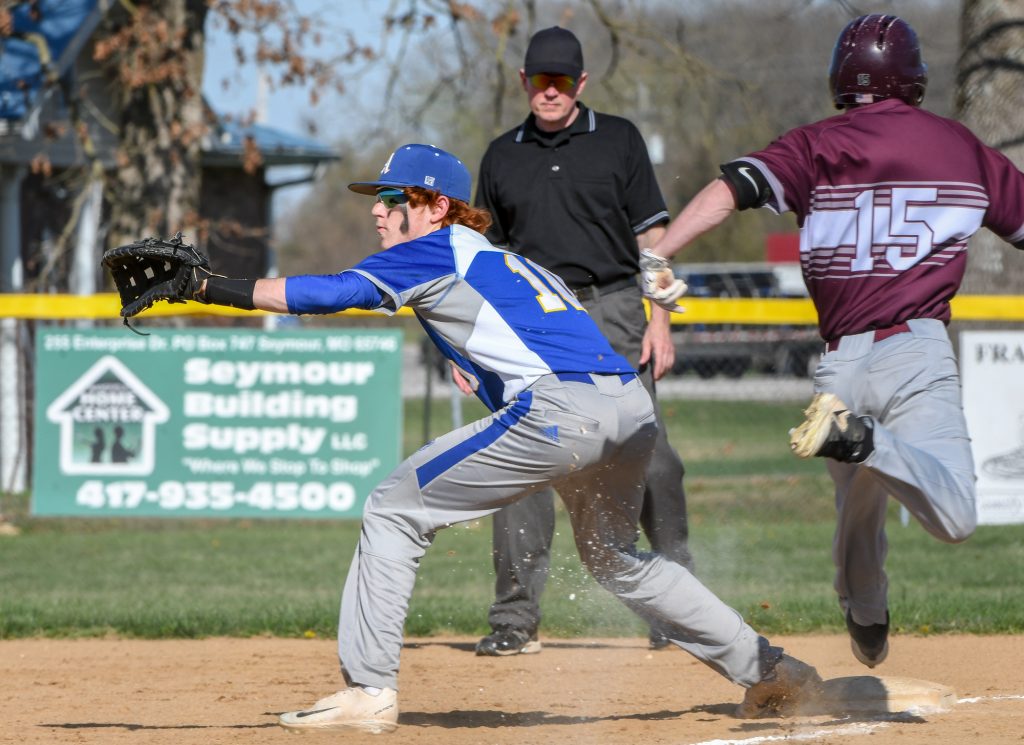 Ava High School first baseman Zach Mendel (10) reaches for a ball thrown in an attempt to cutoff Seymour hitter Truman Hosiner (15) in the first inning of a non-conference, non-district game Tuesday, April 9, 2019, in Seymour, Missouri. Hosiner ended-up scoring in the bottom of the first, brought in on an RBI Double by teammate Brady Brooke. (Jason Hoekema/Douglas County Herald)

Campbell found himself in scoring position at third after Zach Mendel sent a line out to right field but would not come home for the go-ahead run after Reece Adams grounded-out to first. Had Campbell made it in, the game would have been over since the Tigers had their walk-off hopes cut short when Eric Helms was caught stealing third by the Ava defense.

Tom Emerich was due, and due big in the top of the 13th inning. On a 1-2 count, the senior’s bat made the familiar sound of a ball that is going over the chain-link. With his first home run of the 2019 season, the senior was all smiles as the Ava dugout met him at home for a celebration.

Two through four in the order were quickly put away with Skyles on the called third strike, Johnson flying-out to right field and Myers retired on the third swing.

The Bear defense needed to do just one thing. Put away three Tigers and end the marathon game.

Carson Sturdefant was hit by a pitch from Johnson and advanced to second on a passed ball with Reece behind the plate.

A 2-6 fielder’s choice put-out Tiger baserunner Truman Hosiner on a botched steal attempt at second. The commotion was enough to push Sturdefant to third.

A clutch play by senior Garrett Forrest on catching the flyball to right field and rocketing the pearl back to home plate was enough to keep Sturdefant on his heels at third.

Another passed ball cost the Bears when Sturdefant made it in to tie-up Emerich’s homer to make the game 6-6 in the bottom of the thirteenth inning.

A 5, 6, 7 fourteenth inning put the Bears in a losing walk-off position. Seymour’s Scott Helms led-off the bottom of the fourteenth. He made first after taking a hit in the mid-back on a wide curve ball from Johnson, but the defense made good and caught him at second on a 1—6 fielder’s choice on a bunt by Nathan Baker.

Baker got a chance to steal second and advanced to third with only one out.

Brandon Yung was struckout and it appeared that another inning was upon the teams with two put away and the Tigers’ habit of stranding runners.

Eric Helms took a hit, fixing runners at the corners for Johnson to pitch his way out of.

A grounder right to Ava second baseman Payton Evans was fumbled, allowing Sturdefant home for the 7-6 walk-off win for Seymour and putting the Bears at a 6-2 record.