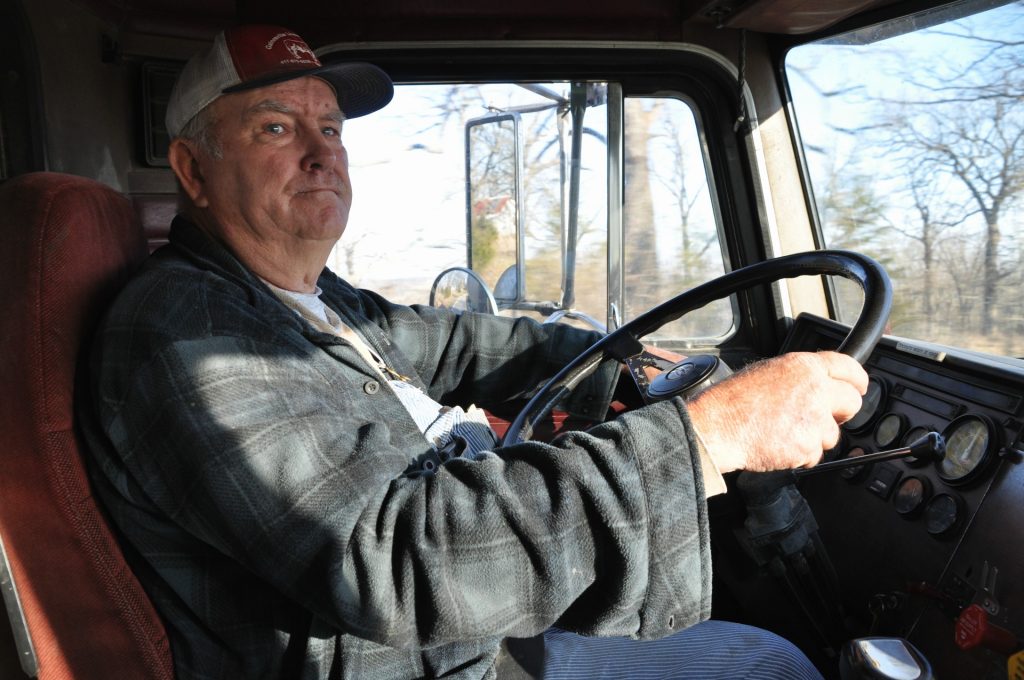 THORNFIELD – As dawn breaks against the quiet black of night, Wade Turner puts  on his overalls and goes to work.

He’s a familiar face at Thornfield’s feed mill, where he’s worked for around 45 of his 68 years. But come next week, that part of life will change. Due to challenges with health, age, and finding help, the family-owned Donley Feed mill will close after decades in business.

It’s the end of an era for the rural Ozark County community, but also part of change in greater Ozarks culture.

After all, while feed may be bought a variety of places, small stops such as Donley’s — where things such as corn, salt, rice and dried distillers grains are mixed to farmers’ requests — are harder to find.

But life goes on. So does Wade, hands gripping the wheel as the truck’s engine roars steadily in the background.

Highway 95 becomes 5, and later 160 and 181, as miles and moments speed and slip away. Wade’s fingers briefly wave Ozark-neighbor-style as people pass the other way; they also turn the truck around corners with precision. It’s a benefit from years of practice.

“I drove an old hay truck from when I was probably 6 or 7 years old,” he says.

He talks of different times as he takes the road through Gainesville and down memory lane.

“I can remember when they stacked hay in haystacks,” he says. “Then they went to square bales. Now they’re doing round bales.”

The mill is just a short piece down the road from where Wade lives; has lived, in fact, ever since he was a kid. 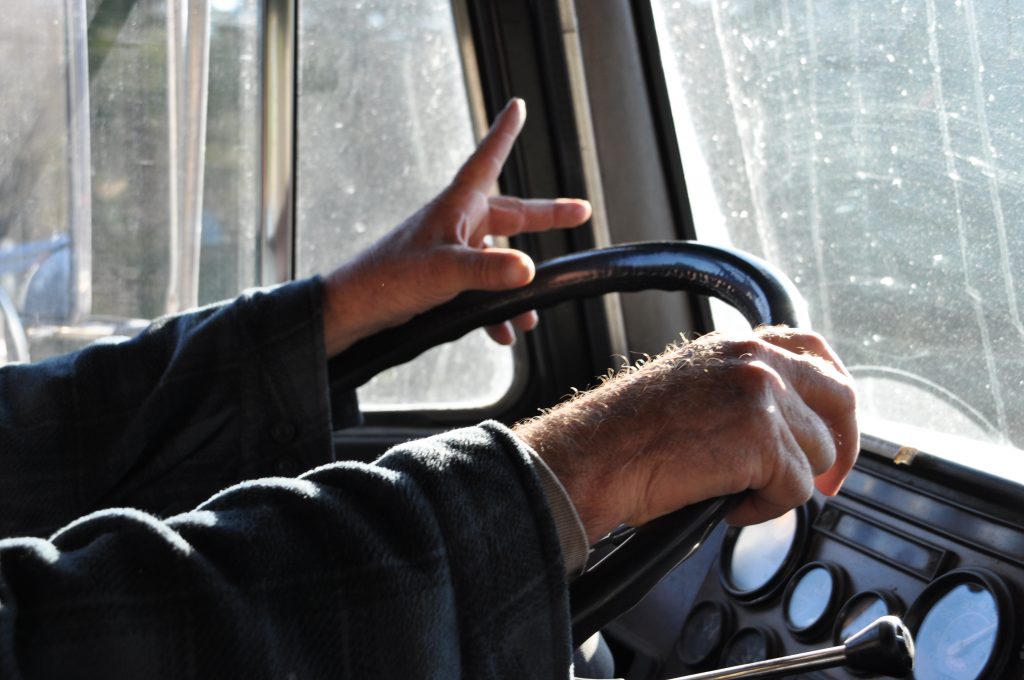 Photo: Kaitlynn McConnell
Waving at neighbors on the road.

From his vantage point on the family farm, he’s seen life change for tiny Thornfield, which today has little left.

Its general store closed only a few weeks ago, the first time in more than a century that there isn’t a place to shop for general necessities. There’s still a bait shop — for fishing at nearby Bull Shoals — a post office, a couple of churches, a cemetery on a hill, a cobbled-rock school, and a creek, but not much else.

“The name of it ain’t Plumb Creek, but it runs plumb through town,” says Wade with a laugh.

The eldest of six kids, he graduated from 20-mile-away Bradleyville High School, since Thornfield didn’t have their own at that time. In addition to classes, he was part of the forever-famed “Hicks from the Sticks” basketball team that won the state championship — more than once — in the late 1960s.

“The most fun was going to Springfield and beating all those big-city schools,” he says with a smile, recounting the feelings of some that Bradleyville couldn’t compete. “They found out pretty quick … at halftime.”

College, however, was never in his plans.

“That’s the way a lot of us were back then,” he says. When he was done with school, he went right to earning money.

There were a few weeks in Iowa doing farm work. He ran a backhoe for “a boy in Theodosia,” and there was time with a bulldozer, until the bottom fell out of cattle prices in ’74.

He was a lumberjack, too, before coming to the feed mill and never leaving.

“Then it come a big snow, and I knew I wasn’t going back to the timber,” he says. “I’ve been here ever since.”

The mill had been operating for barely two years when he started running routes to local farmers; he himself was a fresh-faced young man barely old enough to vote.

He’s one of few who still do things the old way. Most days start early at the mill. A couple of evenings a week, he is a mainstay at music parties where locals play the old tunes passed down through centuries and across continents.

He doesn’t have much use for a computer; he doesn’t own one himself.

“About all I can do on a computer is look up old tractors,” he says with a laugh.

Nor does he have much reason to leave the area where he lives. That nearly lifelong presence and his job — which takes him all over at least three counties — have made him an expert on most nooks and crannies in the country thereabouts.

“Wade is like one of those old pigeons,” says a friend in fun. “Take him out anywhere and he’ll find his way home.”

At the first stop of the day, Wade gets out, quickly heads up a ladder attached to high metal silo, and opens the lid. He maneuvers a giant auger — a giant pipe attached to the truck — over the opening.

Suddenly, and then faster and faster, a shower of feed pours into the silo. It goes and goes and goes until its done, and Wade climbs the ladder once again to close the lid and tie it shut with metal-looking twine.

After taking the ticket inside a nearby building, Wade swings himself back into the seat and takes off down the road surrounded by patchwork-green plots of farmland.

“I could have hit the road and made a lot more money but I didn’t want to do that,” he says. “I like the country people a lot more than the town ones.”

Zanoni, another community that today only exists in hearts, minds and memories, is the second stop of the day.

Wade heads down a dirt trail likely forged by tracks, trucks and tractors. As he fills the farmer’s need for feed, cows watch on. And Wade leans up against the metal pole fence, the sun on his face and slight breeze bringing Spring home.

“I like this kind of weather, when I can stand outside,” he says.

Back at the mill, other folks are wrapping things up. They, like Wade, have dedicated decades of their lives to the business. 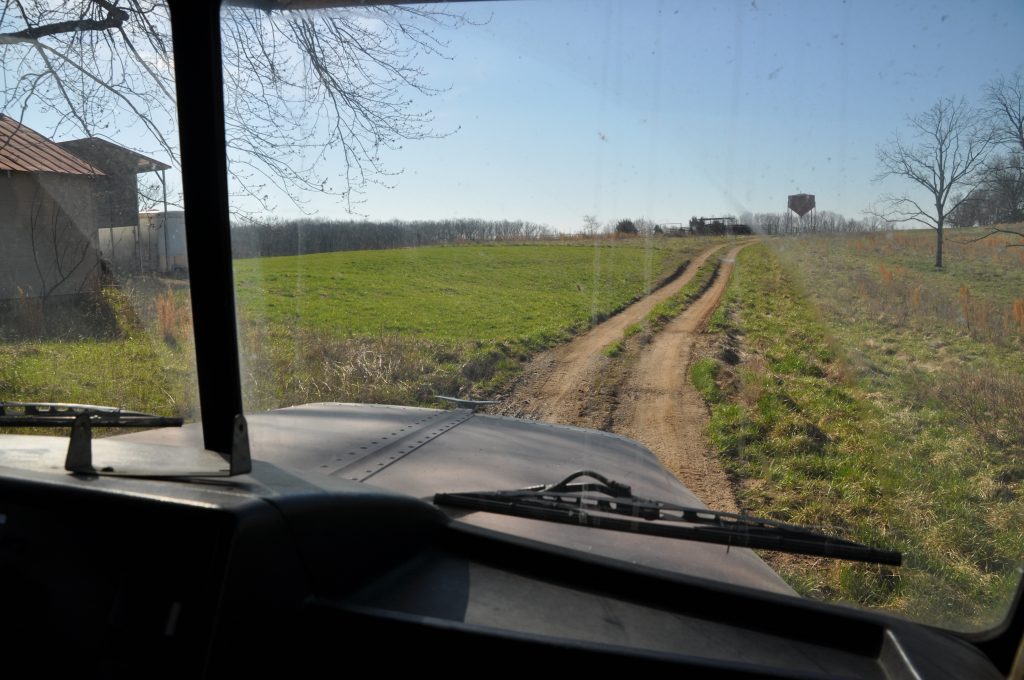 They’ve been there so long, in fact, that it’s difficult to find people to do what they do.

One of those people is H.K. Gaulding, who has less time invested at Donley than Wade does. After all, he’s only been there 42 years.

“I’m going to miss being here every day,” says Gaulding, who helps farmers make the feed mix they want. “It’s bittersweet. I’m just getting old and want to do something else.”

Another face is Randy Donley, whose father began the operation after buying the land and building it from the ground up.

“It’s the only thing I’ve ever known,” he says. “It’s just always been here.”

Even though the end of this week means a new chapter for Wade, the pages-to-come don’t look much different than they do now.

Instead of feed, he’ll work in the fertilizer business, something else that the Donley family sells.

So even after this week, tradition will continue. Wade will head down the road to work, and to farmers-turned-friends. Country folks that he likes more than city people, anyway.

“Most ‘city’ people don’t realize where their food comes from. That’s my opinion,” says Wade. “City people, they just act different. And they probably don’t like country people.”

“City people — they have no idea how to do a job like this.”