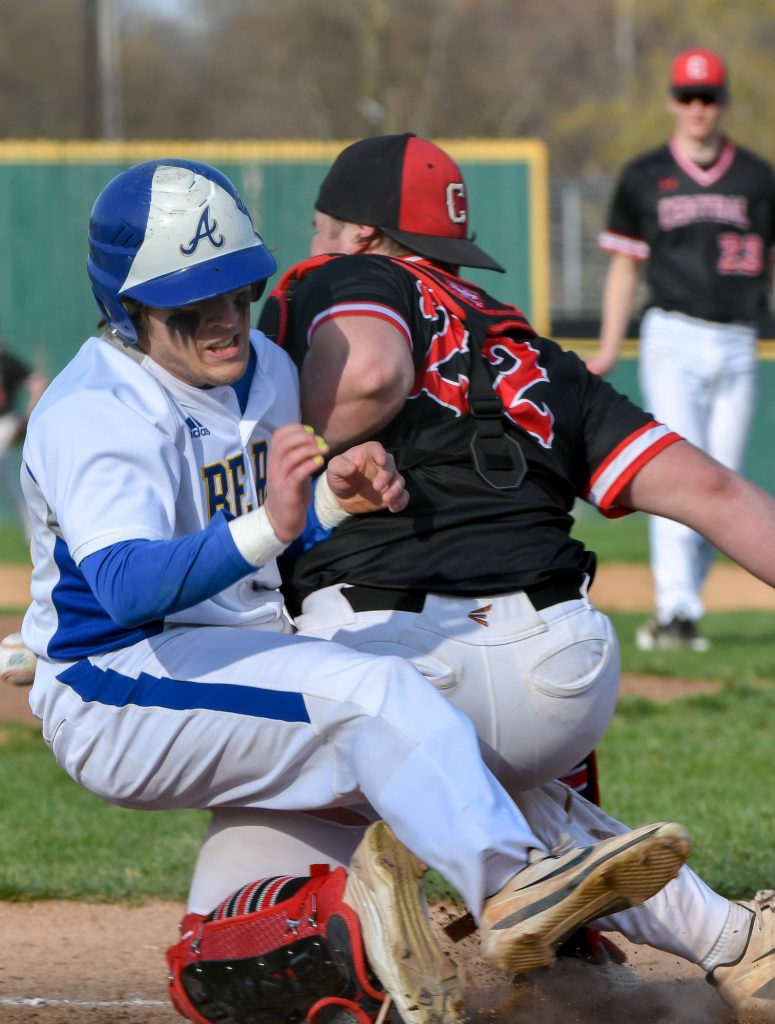 Tom Emerich made it to first on error to start things off for the Bears and put himself in scoring position with a steal of second base. Caleb Johnson, third in the order, brought him in with a long ball to centerfield for the second out and the first run of the game.

A 4-3 play put Zack Miller out at first to go to the middle of the first, and Ava was just getting started.

In a one through four bottom of the first, Bryce Dodson was able to put away two batters who were caught looking at the ball and a 5-3 play by the Ava defense totaled the three outs for Central, who stranded one at first.

The Ava batting order came full-circle in the second, starting with grounder by Carter Campbell who beat the pearl to first for the hit. Andrew Dalton came up next, also reaching first on a bunt down the left infield line with which the Central defense did nothing with to put Campbell in scoring position with his wheels leading-off second base.

“Carter Campbell was hot with the bat today,” said coach Rex Sawyer in a post-game interview. “(Dalton has) been struggling a little bit so I thought we’d lay a bunt down. (As a left-handed hitter) he can push down the side there, the  third baseman was deep so it worked perfectly.”

Zach Mendel hit a clean 2-run double to make the game 3-0 and the bats kept talking after that. In total, seven Ava Bears made a trip around the bags, Campbell bringing-in Johnson and Kaden Myles.

Andrew Dalton made his second appearance in the same inning but whiffed to end the damaging seven-run blast to make it 8-0 with a run of his own.

“We came out and played good baseball early,” said Sawyer. “Our kids stepped up and Bryce (Dodson) gave us another good performance for four innings. We played behind him and then we came-in with Tom (Emerich) there for a couple innings and then Zach (Richard) who we want to see a little bit more of.”

After Dodson put away two and the defense another while stranding one Central runner, the Ava offense fell flat with an 8, 9, 2 top of the third. Lead off hitter Tom Emerich made his third appearance but remained one of three in as many innings after a whiff ended the Bears chance to deal more damage than had already been done.

A pitching change by Central led to a short top of the fourth with Johnson getting stranded at second after wearing a pitch and stealing the second bag after Skyles has flied out to the Central shortstop.

A swing and a miss by Myers and Miller getting caught looking on the full count ended the Ava order in the top of the fourth. A six through eight fifth also came up with runs for the Bears.

Bryse Dodson did good Monday, closing-out a 6-3 win over Mountain Grove after Johnson pitched over 80 in five and one-third innings.

The live-wire delivered again on Tuesday, pitching for three innings picking up no earned runs and striking-out two Central batters. He allowed one hit in the fourth after it became apparent that the sophomore needed a well-deserved rest.

Tom Emerich was forced to come in a bit cold facing five batters in the bottom of the fourth. Work from the mound led to three strikeouts, but after he made a batter wear one as he still warmed-up from the somewhat sudden pitching change.

“(Dodson) started to get a little tired,” said Sawyer. “He wasn’t getting over the curveball and you just can’t keep throwing a fastball because they’re going to keep hitting it. We brought in Tom, they got through scoring one run (but) Tom (came) in cold. We (were) hoping to get Bryce in for one more inning, but he went three and a third did a good job for us. That’s all we can ask from one good player. He is a good role player and he knows that’s his job on that hill right there.”

Possibly saving Emerich’s pitch count for a Thursday game against Willow Springs, the returning senior faced four batters, striking-out one and letting the defense do their job with a left field catch by Carter Campbell and a 4-3 play to close-out the fifth.

Payton Evans was first-up batting ninth in the order at the top of the sixth and earned a double to start things back up offensively for the Bears. With position and wheels to match, Emerich cranked out an RBI double to bring Evans in for his second run of the game.

Spencer Kyles made it to first on balls as Central pitcher Hunter Harrell was replaced by Campbell Eckhardt with two on.

Big-hitter Caleb Johnson was up at the plate and batted smart to pick up first base on balls to juice the diamond without a single player put away.

Kayden Myers made his fourth appearance with the third double of the inning to bring Skyles and Johnson back home, making the game 13-1 with no outs; Miller, Campbell and Dalton next in the order.

Miller was caught looking, Campbell shot one out into right field for the second out, and Dalton gave up a K to end the Bears’ offensive game as it was ruled complete after just six innings.

KEEP AN EYE ON THIS ONE

To close-out the sixth for the Bears was freshman Zach Richard who faced four in the final stretch. His first battle ended with Lance Yens on first on balls, but between the Ava defense and the 13-throws from the hill, Richard was able to walk away with a whiff and two defensive plays to first to seal the stat book.

As a freshman Richard was able to battle with seasoned Central players, running two of them to a full count and making the save by enticing batter Hunter Harrell to chase one for the final out.

Seven hits and 13 runs later, Ava improved to an overall record of 6-1 and will face Willow Springs on the road, Thursday. 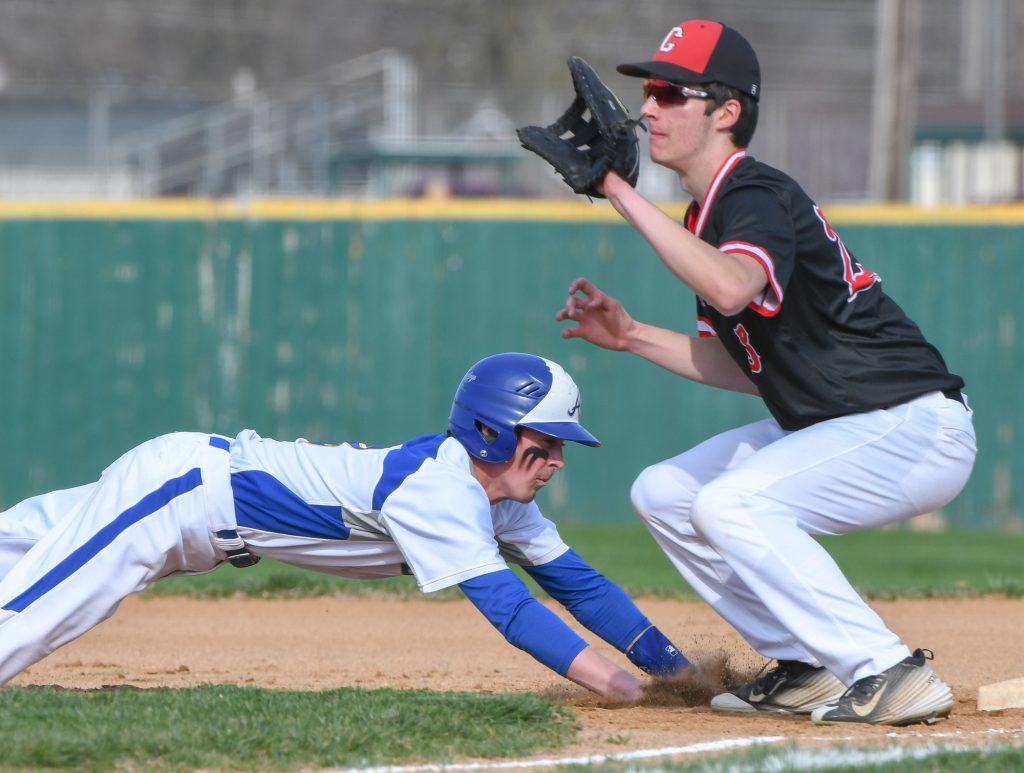 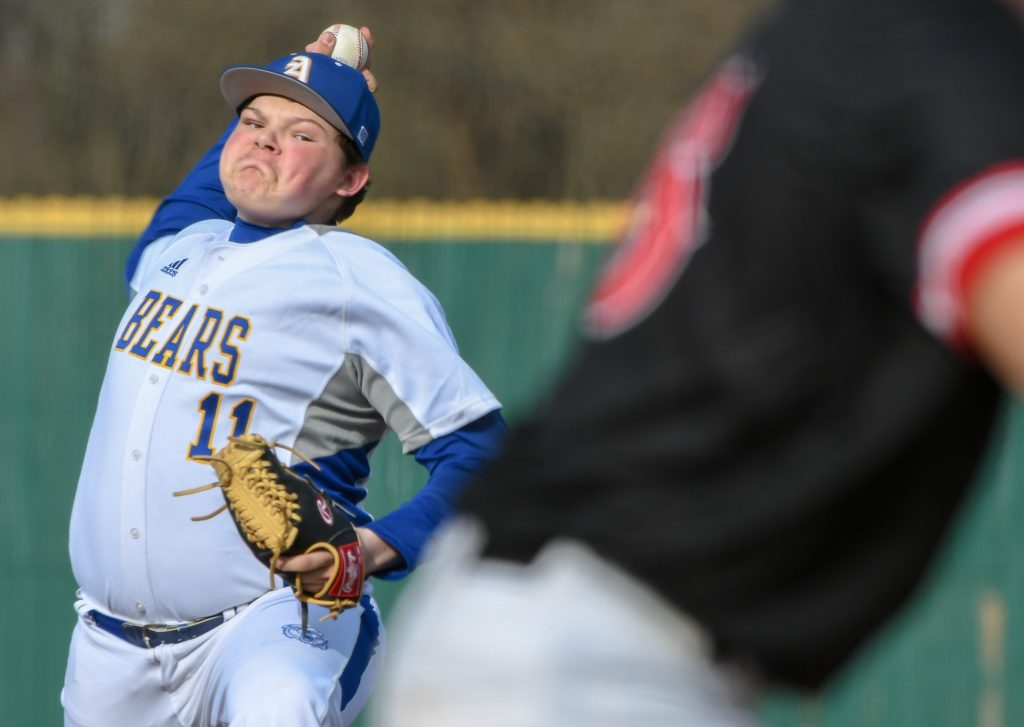