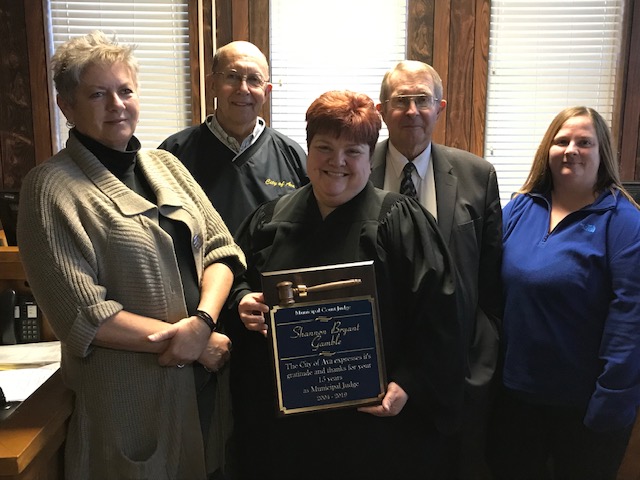 Municipal Court Judge Shannon Bryant Gamble, center, was recognized on Friday, March 15, for 15 years of dedicated service to the City of Ava’s municipal court system.  Gamble, who has adjudicated city court dockets since 2004, served her last day as a municipal judge for the City on Friday.   Earlier this year in February, Gamble accepted a position in the Missouri Attorney General’s Office as an assistant attorney general in litigation.  In her new position, she will be moving to Jefferson City, Mo.  Those congratulating Gamble above are, from l to r, Carol Swainston, municipal court clerk; Mayor David Norman, Gamble, City Attorney Larry Tyrrell, and Stacy Henry, prosecution clerk.  In addition, this session of court was the last day of municipal court proceedings to be handled under the current system facilitated by the City of Ava.  Beginning in April, the municipal court docket will be under the leadership of Judge Elizabeth Bock, associate judge for the 44th Judicial Circuit.