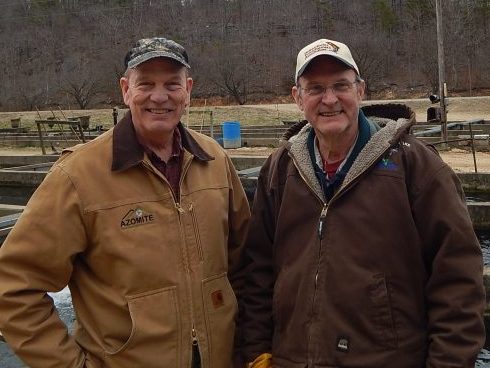 For Missourians, Friday, March 1 launched Catch & Keep Trout Season sending thousands of ambitious anglers to their favorite fly fishing spot. Missouri is blessed with miles of cold, clean streams – the important requirement of these inland salmon cousins. For one Douglas County family, the experience of reeling in a rainbow is a gift Crystal Lake Trout Fisheries Inc. gives to others – wherever they are. This working trout farm raises rainbow trout and delivers them still swimming to stock lakes and streams in more than a dozen states.

With a farm tucked into a valley east of Ava where historians recall Civil War history and the ghost of a town known as Larissa, brothers Marvin and David Emerson continue to run the farm their parents, Dwight and Mary Alice, began nearly 69 years ago. Over the decades, careful planning and sheer determination have led to a successful farm.

Dwight Emerson (the first) , was Kansas City kid who started his career getting his teaching degree from Kansas City Teachers College, in a day when males were rarely found in the student body. There he met Mary Alice Launder, a  Kansas City girl. They wed about 1940. Their first child, Wesley, was born in 1942, just five months after the bombing of Pearl Harbor launched the U.S. into World War II.

Dwight enlisted and attended Officers Candidate School. During the war, his service had taken him to the Philippines. In September of 1945 when the war ended, he continued as a civil service officer there. Family lore says he learned to fly fish in the Philippines – and he was hooked. The young husband brought his family over after the war. Their next child, Nancy, was born there.

As things started heating up in Korea, Dwight and the pregnant Mary Alice headed back to the states  with their youngsters via a long 30-day military cruise.  When they returned, Dwight was determined to start a fishery, and their third child, Marvin was born. After some time in California, their path turned back  to Douglas County.

“A professor had advised him that if he wanted to farm fish, he had to find water,” said David Emerson. Practical advice.

He found that water in Douglas County, Missouri.

In December of 1950, the Emersons moved to the 30-acre farm (which had been a minnow farm) in Larissa where Ozark Mountain Spring fed a body of water called “Lake Crystal” with 10 million gallons of fresh water per day. After clearing some hurdles, Dwight and Mary Alice fine-tuned their water management system and soon they were trout farmers. David Emerson was born during this time – right down the road at Paul Pitts house because that was the nearest phone.

The Emersons, like many beginning farmers, still had their off-farm jobs. Dwight served as principal at Ava Jr. High School and Mary Alice taught at Star School and Cold Springs School.

Eventually, the trout farm stood on its own and the children were coming up surrounded by fields of fish instead of herds of cattle.

These days, there is no apparent evidence of the lake, or the hotel, ice  plant, or store that served wagon-driving locals 120 years ago at the site. The legacy of Larissa is remembered as David’s daughter’s name. Instead, trout raceways and fish corrals bustle with rainbow trout.

David Emerson holds the official title of Vice President in the family farm, and he does a bit of everything. David is often the smiling face of the company because his enthusiasm for trout is contagious and he knows fish. In fact, he’s gearing up for a weekend fish delivery. His older brother, Marvin, applies his business degrees and military experience and serves as President – effectively Chief Financial Officer navigating the challenges of the financial operations. Marvin joined the team full-time after he retired from a military career.

“I’m responsible for everything that does or does not happen at the farm,” Marvin Emerson sums up his job responsibilities.

“When Marvin and I started, we did the work of three men. Then after we turned 50, we did the work of two. Now, past 60, we’ve hired more help,” David Emerson said. Others in the family have always pitched in too. David recalls his mother donning boots and jumping in to do fish chores and he describes his sister Nancy as “one of the best fish haulers we’ve ever had” during the times she’s helped on the farm. The family farm now employs 15-20 people.

The brothers make a good team. Marvin is the numbers guy. David is operations. They also serve the aquaculture industry in Missouri. David Emerson is the current President of the Missouri Aquaculture Association, a producer organization that promotes Missouri’s diverse commercial fisheries. (Seriously, from goldfish to catfish, Missouri has a presence).Marvin Emerson represents Missouri on the Industry Advisory Council for the North Central Region Aquaculture Center, which focuses on research and extension technical issues in more than 12 states.

The industry has come a long way since fish were hauled in buckets on wagons. The science of hauling live fish has evolved. Keeping oxygen levels and temperatures ideal for traveling trout is critical for a product that can’t be delivered in any condition but swimming. The Emersons have developed special tanks and trucks with control panels that are just this side of a space shuttle as truckers must monitor oxygen gages, temperature, and check for leaks and other risks. With this equipment, they deliver trout of all sizes to  public parks, private lakes, and streams across a large region.

With the fundamentals of fish production and delivery secured, the farm is working on diversifying in a way. They’ve begun breeding for a genetic anomaly that produces bright golden trout – they look like koi swimming with their more subdued rainbow brethren. These bursts of swimming sunshine don’t fare as well in the wild – they’re too easy for predators to spot. That trait also helps fly fishermen see where the school has gone, so they make great markers. 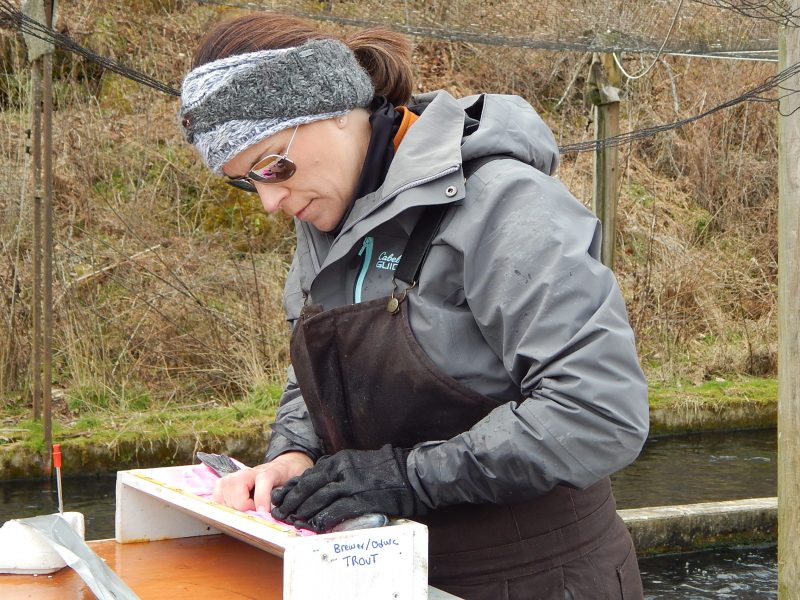 The day of my visit, four wildlife biologists are at the farm tagging fish for a joint research project with Oklahoma and Arkansas. Jim Burroughs with the Oklahoma Wildlife Dept. is netting a few rainbow trout at a time from one fish corral and Shannon Brewer and her graduate student Skyler Wolf are measuring them, tagging them and releasing them into another corral. Project technician Paul Stafford is recording the data. The air temperature is 32 degrees and the crew will tag 500 fish today. By the time they break for lunch, they are working hard to recover heat in their cold hands. 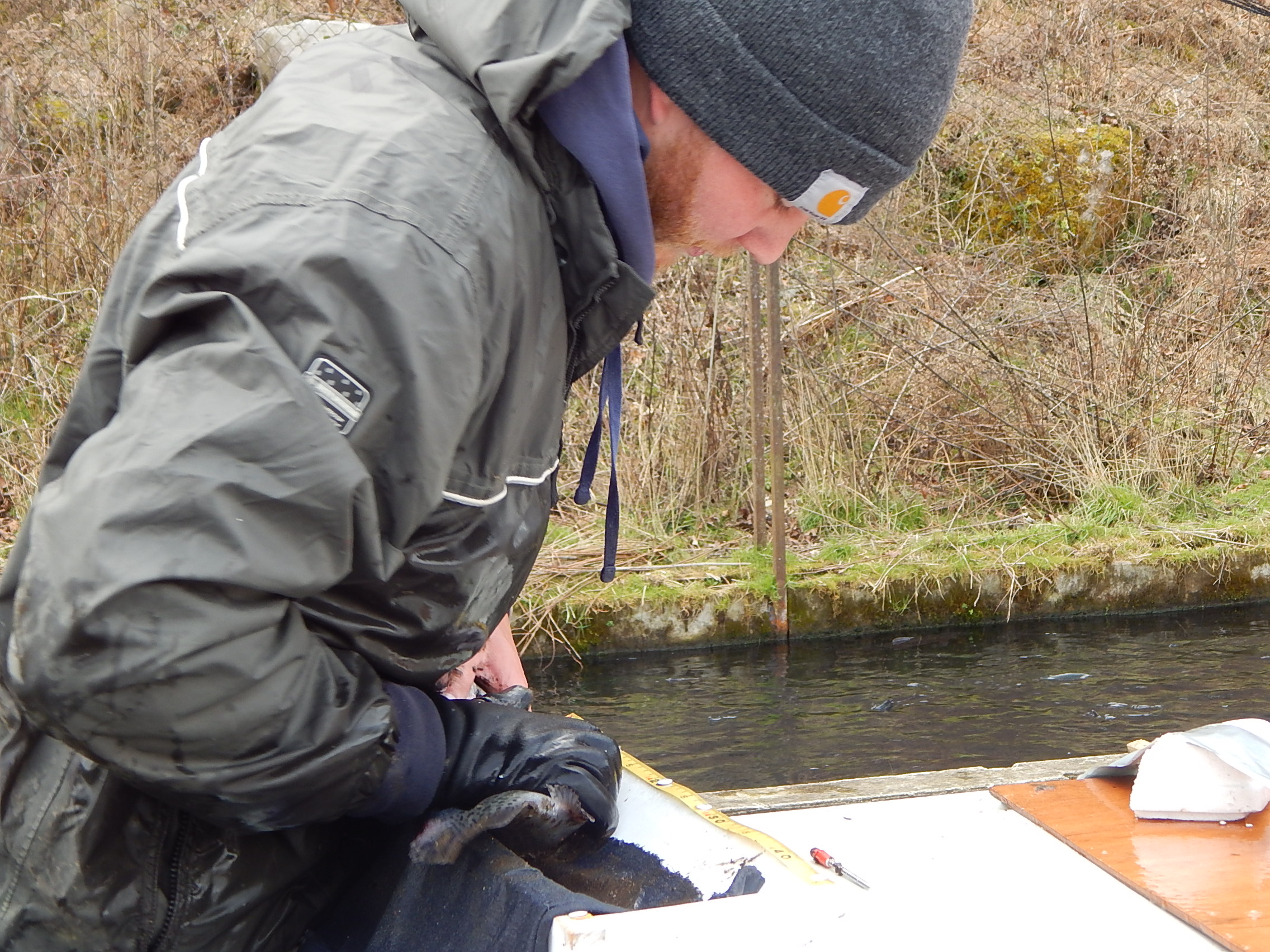 The Emersons treat them to a generous lunch – with trout, of course. Shannon Brewer, PhD. Assistant Unit Leader at the Natural Resource and Ecology Unit is a Missouri native working now at Oklahoma State University and heading the project. She started with a biology degree with a wildlife emphasis so I asked her why she got into fisheries. 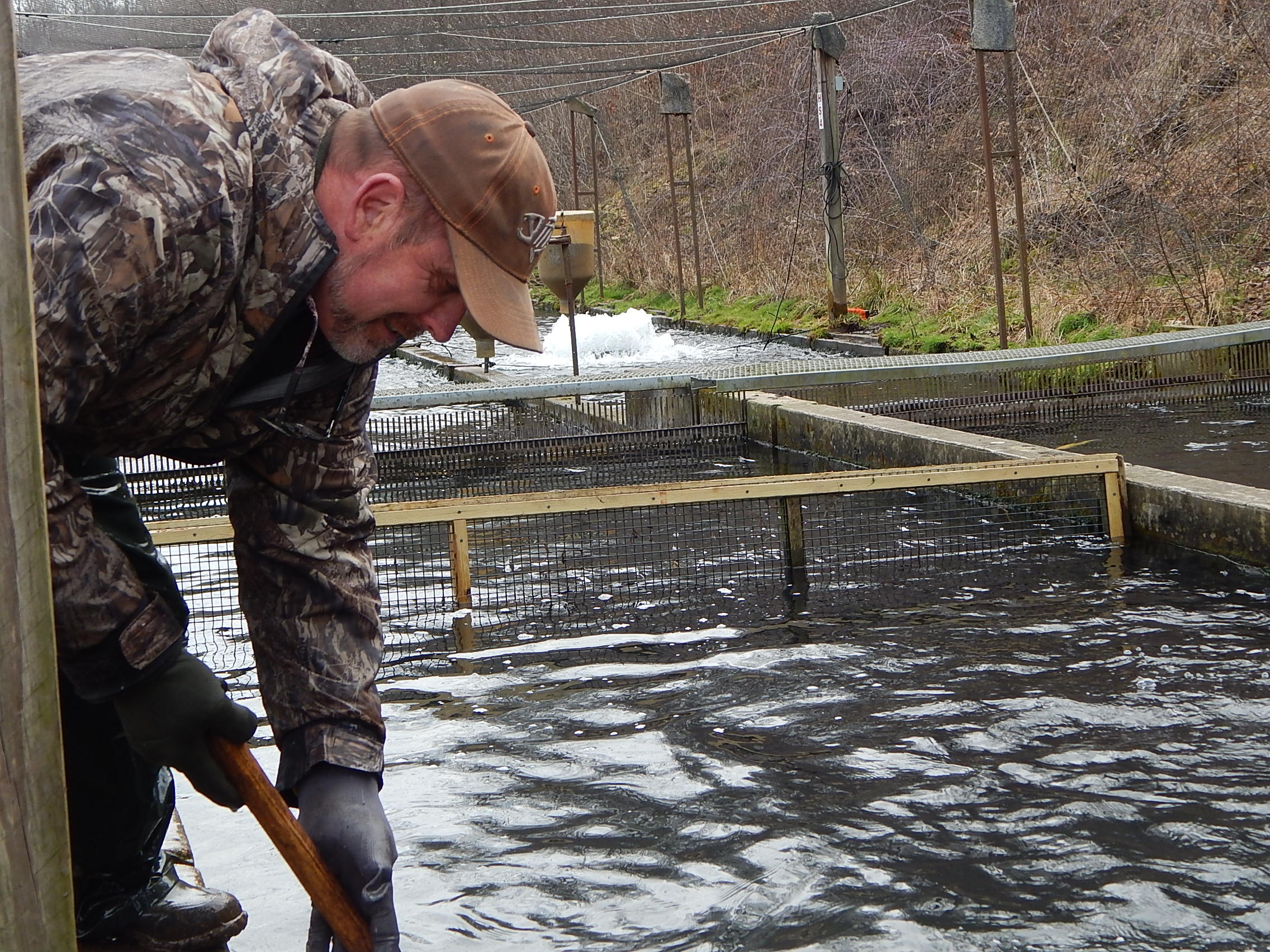 Jim Burroughs with the Oklahoma Wildlife Dept. nets rainbow trout at Crystal Lake Fishery so the team can tag the fish for a research project.

“There are no ticks in water,” she said. Fair enough.

If David and Marvin Emerson have anything to do with it, everyone would fish for trout.

Marvin advises everyone to keep it simple, take the kids and grandkids out, and give fishing a try. “Get a cane pole and some worms and go fish.”

“Rainbow trout are not too picky – or too bright,” he said. Trout, he said, will bite all day long – unlike catfish who are a more evolved fish that get hip to your catch and release plans real quick.

To catch your own Crystal Lake rainbow trout, you must travel west to Highlandville, MO south of Springfield  to the Mountain Springs Trout Park where anglers can enjoy the experience of catching and releasing – or catching and having their fish cleaned and packed to eat at home. (http://mountainspringstroutpark.com)