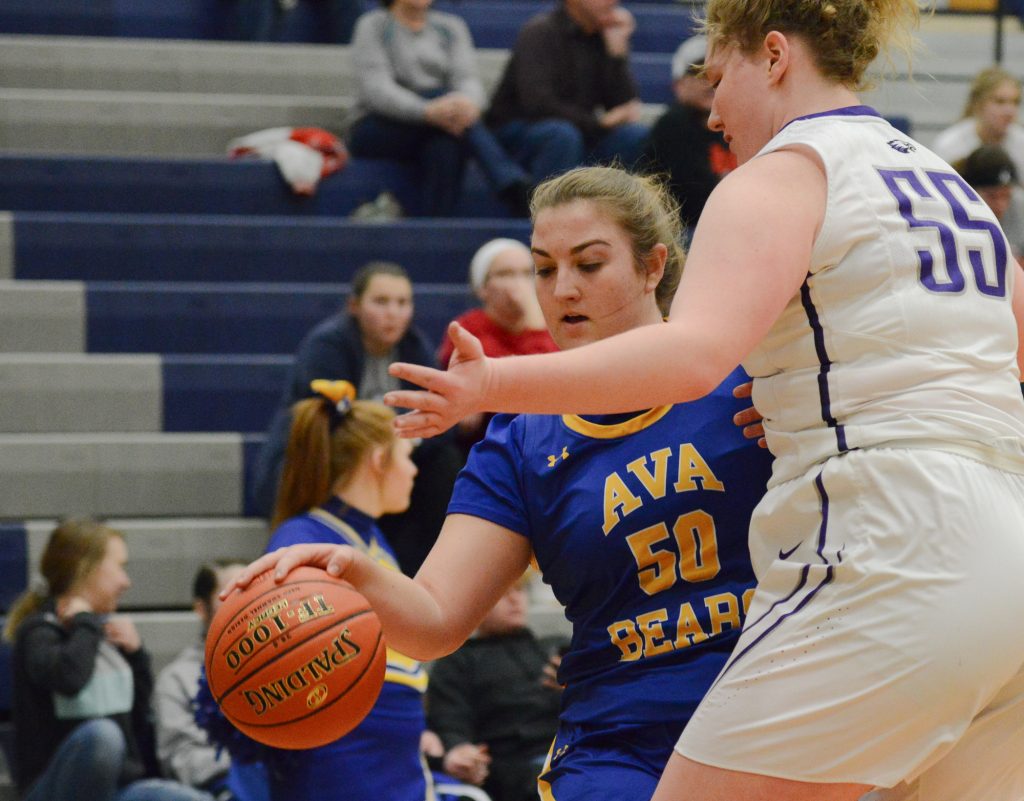 Placed in the 7th seed, the Ava Lady Bears were pushed into a contest against the number two seed, Fair Grove High School. The Lady Eagles are now 23-3 going into the postseason with a decisive, 61-29, win over the Ava girls’ team.

Fair Grove didn’t show any restraint going into the first eight minutes of the game, toppling the game in their own favor with an 18-6 lead.

The Lady Eagles’ Alana Findley was able to pierce through the Ava defense for six buckets in what seemed as many minutes into the game. Another two from Harley Maxwell and freebies made by Maxwell and Lexie Sutherland would cap the first quarter at 18 points for the top-tiered contender.

Several turnovers and missed opportunities ailed the Lady Bears, many of which led to a score for the Fair Grove bench. The Lady Eagles had height and game over Ava, allowing them to make crucial steals and shot denials to put Ava in the hole quickly. 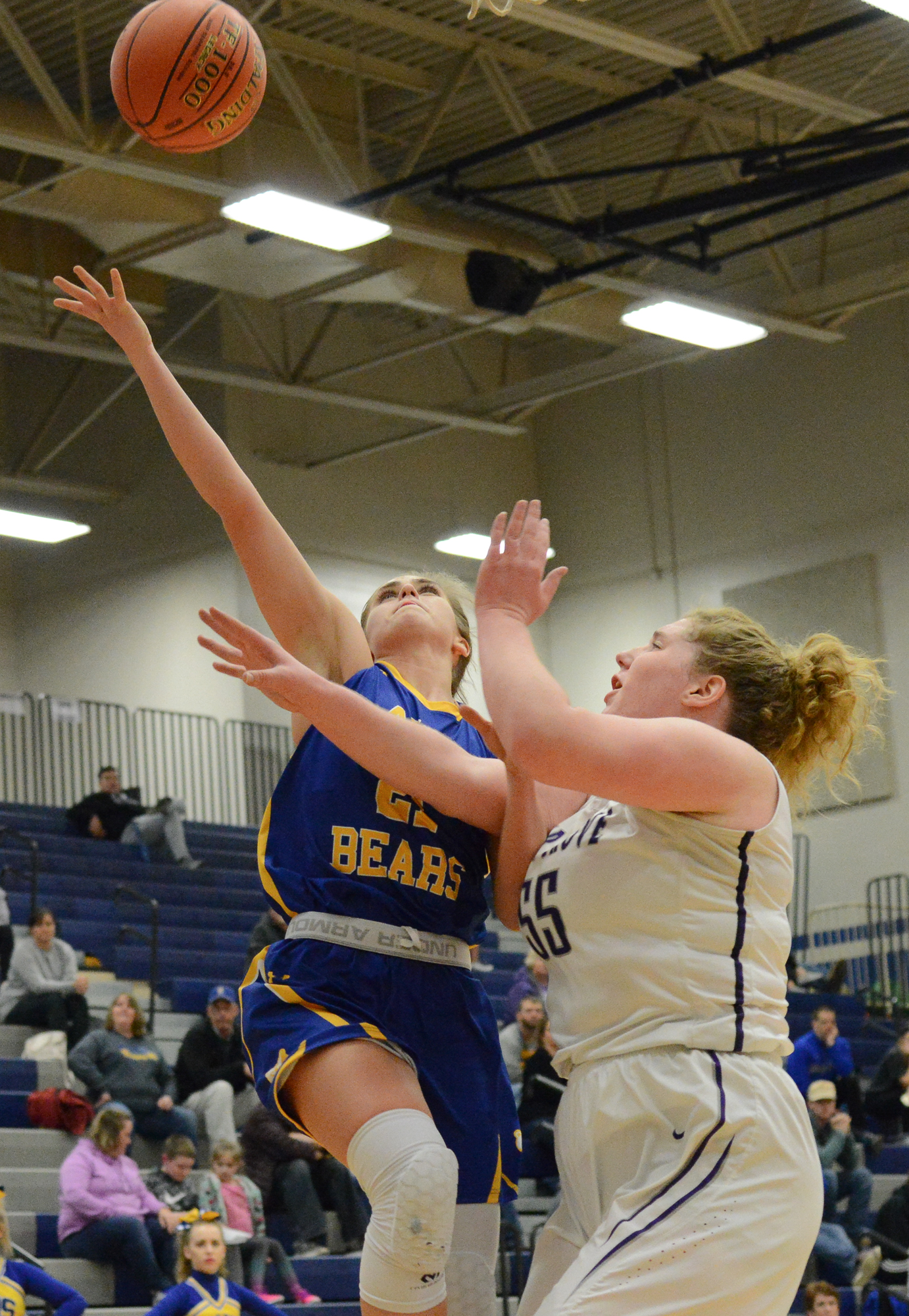 Ashton Bewley was able to pull two plus the and-1 in the first and Lauren Mendel found herself open just long enough to fire-off a shot for three.

The second quarter wasn’t any better with the Lady Bears held to no points before the halftime break. On the other end of the court the Lady Eagles had shot-after-shot going through the net as the Lady Bears tried to keep pace with the stronger team.

Brooklyn Luna made her first scoring appearance in the second, sinking two threes. Fair Grove’s Maddie Clark, Sutherland, and Maxwell all contributed to the 20-0 period before the break.

The Lady Bears were able to better-guard Findley, who was able to sink six field goals in the first quarter, holding her to just one bucket before the break.

At 38-6 in the halftime break, the game’s outcome was all but certain as the clock bled through the second half where the Lady Bears improved but could not shake the overwhelming pressure delivered by the Fair Grove bench.

In the third quarter the Lady Bears kept up with the Lady Eagles, who still took the period scoring 15-14 over Ava.

Emaly Keyes came into the game and hit a three for the Lady Bears, boosting the score on top of Bewley’s eight points after the break. Bewley was able to pull another and-1, sinking the shot along with another two and a three. Mendel drew at least two fouls in the third, shooting 75-percent from the line for three points.

“We were able to settle down and get more of a flow offensively,” said coach Nathan Houk. “Ashton got some and-ones and got to the free-throw line, Lauren got to the free throw line. Then Emaly Keyes came in and hit a shot and some other kids started scoring. We started getting a little bit more offense from some of the other players, but you know it’s a very tough team to prepare for.”

The Ava bench started to rotate in-order to provide younger players with minutes against a high-octane team, experience that cannot be recreated in practice on the home maple.

“They are the second or third ranked team in the state for a reason,” said Houk. “It’s hard to create that kind of intensity in practice (to get) mentally and physically ready for a game like that. They’re the toughest team we’ve played all year and we’re trying to toughen our schedule up (and) added them to our schedule for next season.”

With both teams rotating younger players onto the floor, freshman Lauren Hall opened the fourth quarter with two, but was answered by Fair Grove’s Findley who shot for five in the fourth to cap-off a 23-point game in her name.

Bewley made one last bucket to conclude her high school career at an estimated 1,050 points over four years at Ava. She also made a career-high of 28 points during the championship game of the Cabool Tournament against Koshonong High School.

The Ava Lady Bears are losing four senior players in Bewley, Mendel, Araina Evans, and Emily Stillings, who are expected to graduate this summer, leaving big shoes to fill with the younger core of players who have subbed and shadowed the experienced leadership provided by the four.

“We’ve got a lot of good, younger kids that are capable of moving up into those slots,” said Houk. Lauren Hall is going to do a great job for us in that guard spot and we have two post players in Julia (Henry) and Baylan (Alexander) that can (take over for) Lauren and Araina. We have Hannah (Evans) coming back and Claire (Fossett) coming back, so we’ve got enough experience. They’ll be good leaders for our team and then we’ve got enough good young kids coming that we’ll be able to replace (who) we lose at graduation.”

Houk sees a bright future for the girls’ bench in Ava despite the loss of four seniors. Previous seasons have not been as great as this year’s 14-11 record and Houk thinks that the departing class served as a foundation to build on in the next years on the court.

“Their last year, or their sophomore and junior years, we only won seven games each season and they were determined to have a winning season this year, we finished 14 and 11,” said Houk. “We’ve met a lot of our team goals, we won two games in every tournament which they hadn’t done in the past. I told them with the kids we got coming, we’re not looking back, we’re going to try and build on this to have a winning season every year from here on out. They can look back and realize they were the ones that started it. I’m really proud of them and wish them all the best in their futures and I’m going to miss coaching them.”

With 25 games at a pace of nearly two per week under their belts, coming home and not having a practice will be a big change for the team as Houk says they “get back to just being kids again.”

The girls will have some time off to rest and reflect, followed by game-planning for the next season after a few weeks away from the pressures of the sport.

The 2019-2020 season will begin with a team meeting, creating the summer schedule, and preparing for the workouts the girls will perform over the summer break.

“We’ll probably go to a couple of shoot-outs and we’ll have a lot of open gym there at Ava,” said Houk. “We’ll come back together as a team and start trying to get better as a group so that we can be ready for next year.”

As for Coach Nathan Houk and the countless hours put-in for the Lady Bears?

The season come with changes as well.

“Tomorrow when school gets out, I’m not sure what I’m going to do,” said Houk. “I’ve got a job that’s pretty demanding, so (it will) help me fill-in the extra time with other duties that I have. It will be a little bit of a culture shock not go into the gym for a little while.”