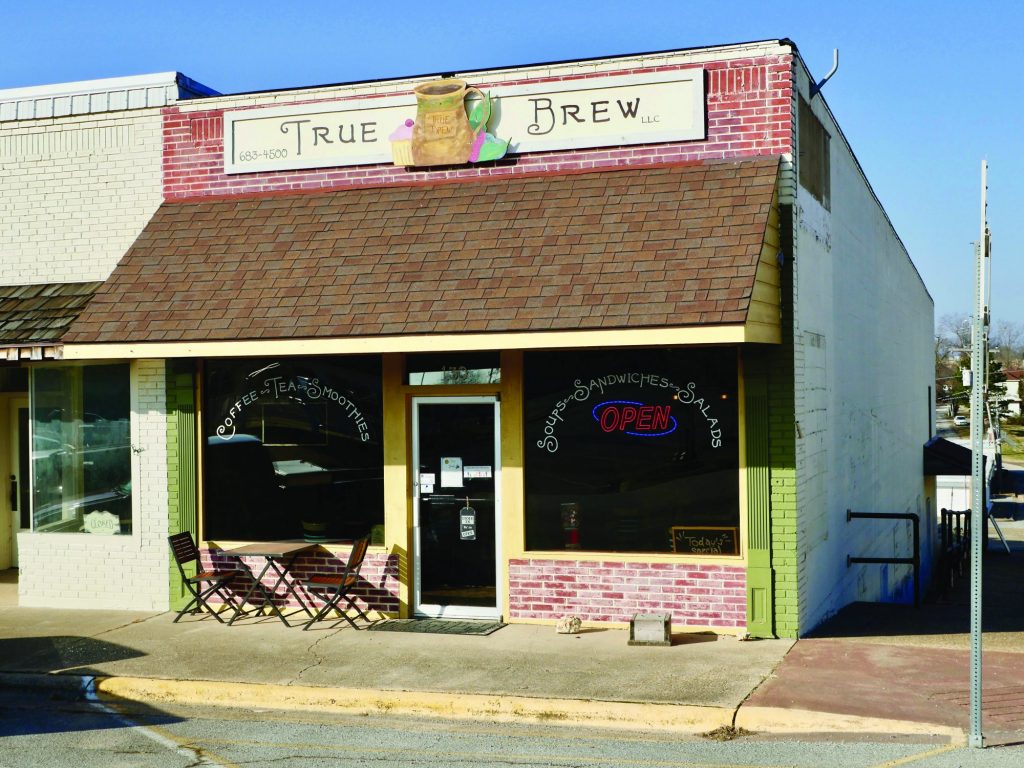 There’s a bit of a masquerade happening down on the Ava square.

Something is not entirely as it seems.

But in a good way.

As you drive around the square, sometimes it’s all you can do to navigate the corners and watch for other traffic. It’s easy to just skim the business signs and make quick assumptions.

At first glance, True Brew Coffee shop does live up to its sign. They offer what you might expect of any good coffee shop – coffee, espresso, tea, Chai Lattes, Italian Sodas and smoothies.

But if coffee isn’t your thing, consider taking another swing around the square and giving True Brew another look.

“We offer more than you might expect from a coffee shop,” owner Tom Martincic says. “True Brew really is a restaurant with a full menu.” 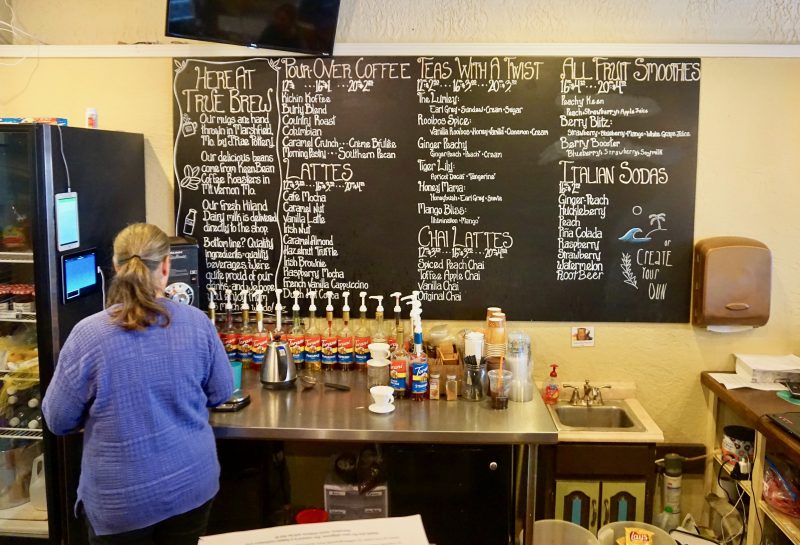 The coffee shop has a full breakfast and lunch menu.

Lunch options include sandwiches, wraps, soups and salads, most of them in the mid six-dollar range.

And for dessert? The coffee shop offers $.50 scoops of ice cream – hoping folks will recall the days when the drug store down the street had a similar offering.

Martincic wants to extend the store hours and offer dinners as well.

“We’d need more volunteers to make that happen,” Tom says. “Maybe five or six who would be committed to being here on a regular basis.” 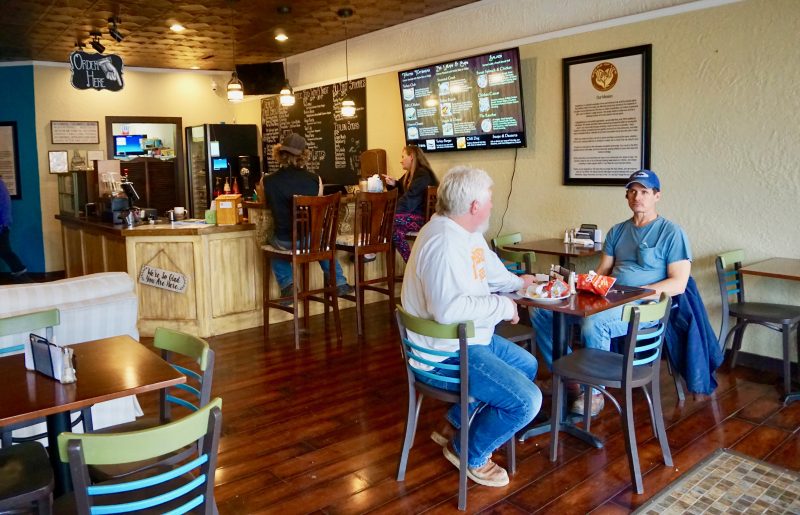 There’s the word that unmasks the true nature of True Brew.

The coffee shop is the visible means by which its parent organization, Bread of Life Giving and Sharing, accomplishes its work in Douglas County.

“We are a 501(c)(3) non-profit organization and our primary goal is to provide meals to those in need – especially children,” explains Tom. “We are funded by sales of regular paying customers just by eating here, or by donations. Everyone who works here is a volunteer, and every dollar that comes in goes towards expenses of providing the food, or keeping the building open.”

It all started with an idea that looked a bit different.

“We realized Ava didn’t have a soup kitchen, so we started looking around for a building that had a commercial kitchen we could use,” Tom says. “But the only thing I could find was this coffee shop.”

“My wife had a vision for a ministry based on a coffee shop, then proceeds from coffee would fund the soup kitchen.” Tom says, “But as we thought about it we realized there’s a certain stigma attached to eating in a soup kitchen. We didn’t want to treat the people that have needs differently from the people who don’t.”

In June of 2017 Bread of Life Giving and Sharing started a campaign on GoFundMe.com to purchase the existing True Brew business and building. The campaign was successful in 42 days, fully funding the purchase. “We now own the building free and clear,” says Tom.

During the process of taking over the business and extending the dining area, Martincic developed a way to accommodate both paying and non-paying customers from the same menu.

True Brew provides special meal cards on each table. “For those who are unable to afford a meal,” Tom says, “They just order, then point at the card and it’s all provided at no charge.”

Martincic isn’t concerned about being taken advantage of. “We’ll try to use discretion. Sometimes it’s obvious,” he says. “But if they have kids I don’t care – I’m not going to turn them away. It will get exposed eventually. And I believe the Father will provide.”

With meals taken care of, Martincic found another way to help families.

In the basement of the building is a clothing distribution center with racks of clothing in children’s and junior sizes. “Anyone with a need for clothes can come in,” Tom says, “and take what they need.” 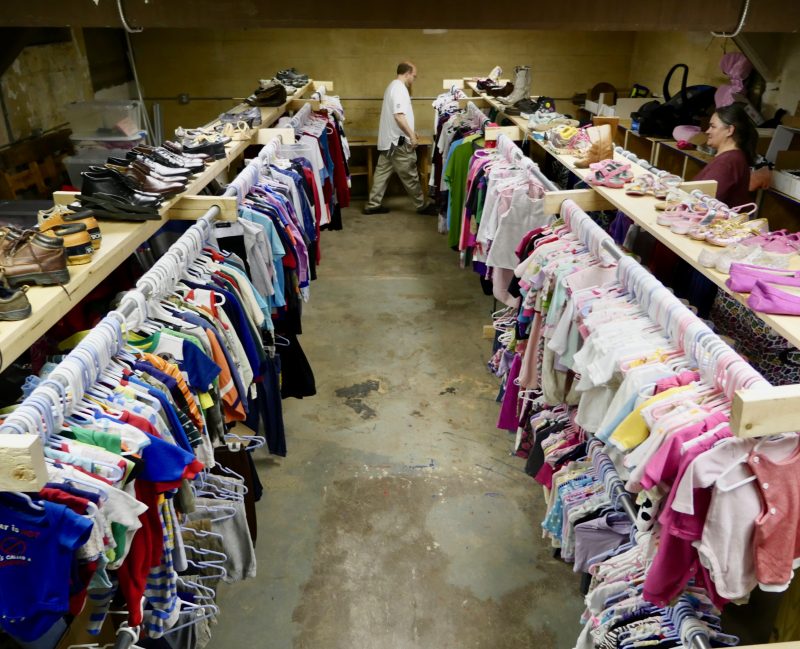 Racks of children’s clothes are available free of charge to those in need.

Martincic hopes Ava residents realize how easily they can act to benefit others in town. “All you have to do is come here to eat,” he says. “By making that choice you are serving the community.”

The True Brew Coffee shop is open 8 a.m. to 4 p.m. weekdays, and 8 a.m. to 2 p.m. on Sundays. View their complete menu and order online at givingandsharing.org/menu.