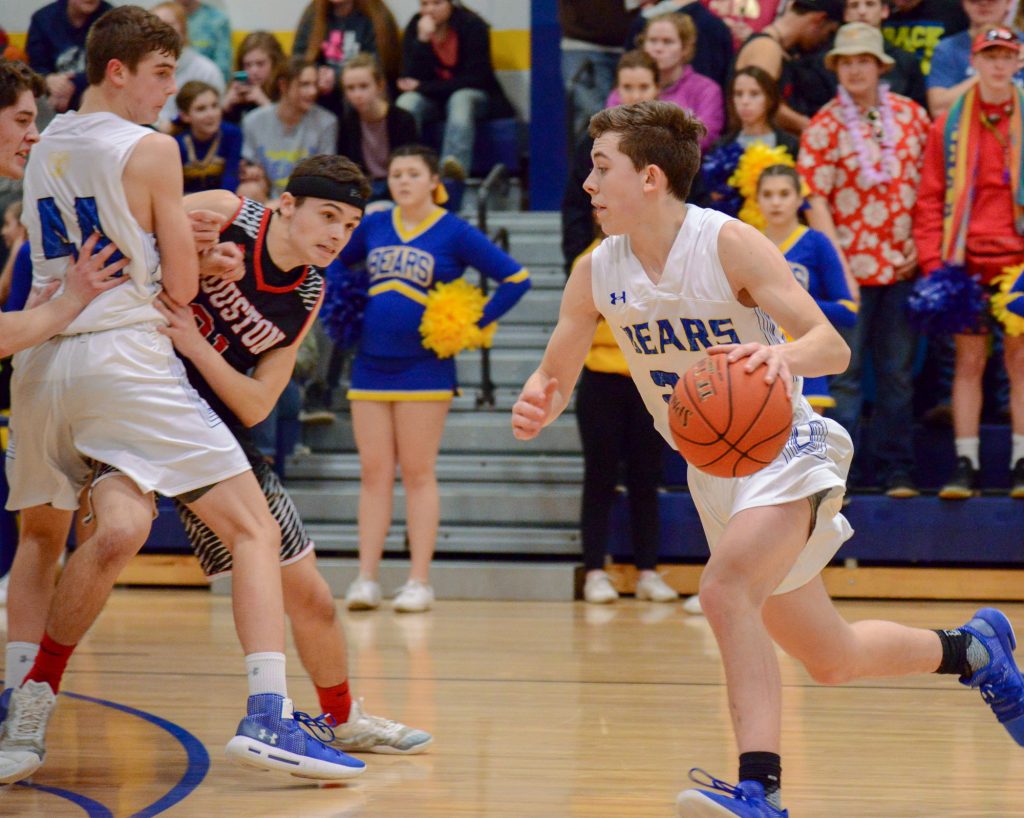 The Ava Bears toppled the foul-ridden Houston High School Tuesday night with a near-double score over the visiting Tigers.

The win wasn’t without some issues, though.

Blake King had a great night with 10 points, sinking pivotal threes in the first and third periods. It was a good game to play coming off a 65-53 loss to Thayer on the road this past Friday.

Nate Swofford also put up five with a deflating three early in the game to spark five unanswered points for the Ava offense.

Shortly after, with contributions from Blake King, Andrew Dalton and Nate Swofford, the Bears went on an 11-point run before closing up the first quarter of play.

“We talked a lot about defensive intensity and playing hard,” said coach Mike Mallow. “I think we’re doing a better job of not fouling and protecting the basket while applying pressure. You know we’ve talked all year about we want to apply pressure, but the cost was too many free throws and too many layups so we’re starting to get better at those.”

The ball went back and forth so much that it became difficult to track the number of turnovers on the court. The speed and immense pressure being a big part of this Ava team.

“There are a lot of possessions (and) you can come out and hold someone to five points in a quarter,” said Mallow. “If they’re only four possessions apiece it’s not a big deal. Man, that thing was up and down the court. So, holding them to five points was really a good job.”

The Bears held their own and more opening up the game with a 21-5 lead in the first.

The Ava bench pulled things together after a flat second quarter and rallied with threes from Blake King, Caleb Johnson, Kaden Bruce, and Dalton to take back control with a 17-10 third quarter with back-to-back runs of eight to secure the lead 48-28.

The fouth quarter went to some of the younger players on the varsity bench with Blayne Mendel making four points with help from seniors Drake King with three, and Caleb Johnson with two free throws to take the game at the buzzer with a dominant 60-36 lead.

In the second period, everything seemed to fall flat for the Bears. Nothing was working and the ten points put in the books were from free throws split between Emerich, Swofford, and Dalton.

Not for lack of trying, but the Houston defense learned a thing or two about Ava the last time they met in the Mansfield Tournament.

“Well they’re playing a pack-line defense,” said Mallow.  “They are playing the drive and they’ll let you catch it. We kept passing it and then wanted it back because we feel like we’re open. “We always teach them if (they are) open let’s attack. But we were open because they wanted us to be open. We had to get them back to screen-running the offense to (get the) offense to flow a little bit and things got better.”

Meanwhile, the Tigers took the second 13-10, pulling four free throws plus another nine on the clock from Kyler Ramsey, Connor Wilson, and Clayton Moore.

The Houston lineup was also in foul trouble from early in the game. Although both teams have improved since their last meeting, it appeared that the Ava bench was fouling smarter and less often. This gave up only nine free points in the contest while allowing themselves to feast on 19 freebies at the charity stripe.

Houston’s Connor Wilson fouled out in the fourth quarter and the Tigers racked-up a game-total of 21 fouls for 24 attempts at the line for the Bears.

In the second quarter, Tom Emerich received the first player technical foul in the Bears’ season. After pulling a foul from Tigers’ Clayton Moore and falling to the floor, Emerich gave the opponent an additional shove after the play was called dead leading to a quick tap of the official’s hands in the sign for a technical foul.

“Obviously, those aren’t acceptable, and we’ll deal with that in-house,” said Mallow. “I thought he got roughed up a little on the floor there. Then he didn’t handle his emotions very well, sometimes that happens. We don’t want to make excuses for that, and Tom is a good kid. Just, a lot of emotion in this building… I mean it was wild in here.”

Emotions were running high after Swofford took a hit to the head from Dakota Bruchett right before Emerich ended up on the floor. Then, exactly ten seconds later the call came right back at Houston.

Kyler Ramsey ended up getting double-tapped with penalties after having an offense charge called on him. The first was for the charge, the technical which followed was for slamming the ball on the court in frustration.

With 6:44 left in the game and the Bears pulling away from the Tigers despite back-to-back threes by Clayton Moore, Nate Swofford ran the lane for a layup and was fouled in the air by Ty Franklin.

The collision sent Swofford past the baseline for a bad landing on the left ankle, forcing him to sit out for the rest of the game.

“Well we’ll have to see how bad it is,” said Mallow.  “I was telling him he seemed to be in quite a bit of pain, but when we took the shoe off the swelling (wasn’t as bad). The hope is he’ll be back and we’ll be ready to go. If not, we’re going to have to get some guys off the bench ready and maybe play some other people. You know we’ve got Zach Mendel that we didn’t have the last two times he was hurt so maybe he’ll help fill a spot there a little bit too.”

The Ava offense is unique in the amount of pressure they apply to the opponent on both ends of the court. To keep coming up with turnovers and buckets, Mallow needs top-tier players ready to rotate in and out of the game, and he needs them frequently.

“If we’re going to press and play this fast, we’ve got to come up with that person or a couple of people to share those minutes,” said Mallow. “We can’t just absorb them with the other seven guys. We’ve tried it twice and lost both games it’s just it requires too much effort to play the way we play with seven. You’ve got to have at least eight.”

Blake King contributed ten points, second only to Dalton with 14. Nate Swofford was able to put-in the work for nine points before his injury and senior Drake King came up with nine in some crucial moments through the game.

The Bears shot a collective 79-percent from the free throw line, making 19 of their 60 points on the charity of the Houston bench.

A game total of 14 fouls were committed by the Bears, but the bonus situations were given up late in the second and fourth quarters at 2:41 and 43.1, respectively. The late bonus limited any chance of points being made by the Houston bench, who saw just two one-and-one visits to the line the entire game.

The Bears will have to come up with a game plan to fill the void at Swofford’s position should he not recover in-time for Friday’s “Hoopcoming” game against Salem here at home.

With the return of Zach Mendel, the high-pressure rotation may still succeed as long as Coach Mallow can come up with the fresh legs to keep the Bears going against the 5-14 Salem Tigers.

Plan for a big crowd Friday and come early for parking as it is Ava’s Hoopcoming night.

“I just I thought our fans were great tonight,” said Mallow. “It’s great to be home. We’ve got two more home games and hopefully they’ll continue to support us.”