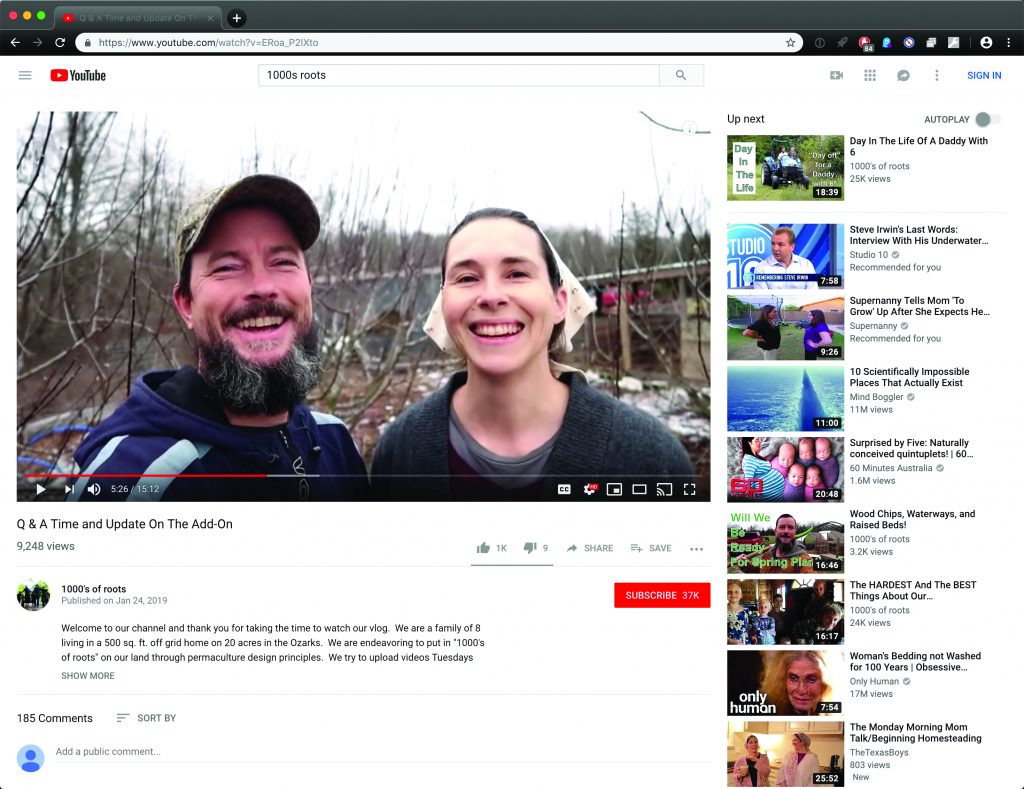 In a logic class, an instructor might say two events are “mutually exclusive” if they cannot both occur at the same time.

If you toss a coin, you get either heads or tails. If your car dies in the middle of a Douglas County county road water crossing, you either have to push it out or pull it out.

It’s an either/or. Not a both/and.

You might think that running a successful YouTube channel and homesteading as a family are mutually exclusive.

Consider what it takes to run a YouTube channel.

You need gear. At least a digital camera, computer, and an internet connection.

Then there’s the content. How much time are you willing to spend planning, creating, and editing video? Your work is competing with the other 300+ hours of new video uploaded to YouTube every minute.

After you upload a new video your work has only just begun. Now there’s marketing and promoting your video to get subscribers.

And then there are the comments.

User comments are often the source of the most joy and the most pain video creators experience while running a channel. Being active in your own comment section can take more time than making the video.

And when does the money start coming in?

The most common route to making money on YouTube is to put ads on your videos. To do that, you need at least 1000 subscribers and 4000 hours of accumulated watch time across all your videos.

It’s not easy money. One study found that the top 3 percent of the most-viewed YouTube channels bring in advertising revenue of about $16,800 a year. You could be a YouTube celebrity and still need to deliver pizza to make ends meet.

Cows to milk. Beans to pick. Pigs to feed. Frozen watering systems to unfreeze. Fences to mend. Worrying about the coyotes getting your chickens. Or the deer eating your garden.

There’s always more to do. Having extra hands from a family helps. Toddlers or teens, homeschooled or public-schooled, homesteading can provide learning opportunities kids won’t find elsewhere. But it all has to be planned, scheduled, and coordinated.

Overwhelmed yet? With all the work homesteading and YouTubing each require, surely no one could do both?

Meet two Douglas County families running both a YouTube channel and a homestead.

Kip Smyth, his wife Carrie, and their 6 children are originally from California. They came to Douglas County after stints in Arizona and Alaska.

They chose the Ozarks for its affordable land, favorable political and tax climate, and homesteading-friendly building codes.

On YouTube the Smyths are known as “1000s of roots”. They started actively documenting their approach to “permaculture homesteading” in early 2017.

In one of their first videos, Kip and Carrie talk about their reasons for starting a YouTube channel.

“We want to be producers of food.” Kip says. “And we wanted to inspire others to do the same.”

They’ve adopted a divide and conquer approach to running their channel. “Carrie and I take turns making the video each week,” Kip says. “But I’m still learning to edit, so Carrie does all of that.”

Their system has worked. Their channel has over 215 completed videos with topics including “Morning Chores with the Boys”, “Wild Edibles Hunt”, “Kindness is Contagious””, and “Off Grid Solar Power and Beyond”.

And they are starting to make money. One hit video gave them the boost they needed.

“That’s a blessing that started about 4 months ago,” explains Kip. “Carrie uploaded a ‘Day in the Life’ video that shared her day on the homestead, talked about why she wears a head covering, and why she dresses modestly. It went viral. Before that we would get maybe 7 subscribers a day. After it we’d get like a 1000 a day.”

That video helped them gain the 38,000 subscribers they now have. Their videos have been watched over 2.5 million times. That’s enough traffic to be able to include ads on their videos, but also they earn money in ways besides ads. They’ve been able to leverage the YouTube traffic to also make money through Amazon.com and Patreon.com.

And sometimes? Fans just send them things. “People are falling in love with our children,” Kip says, “and want to give them gifts.”

Some families might be concerned with letting viewers have such easy access to their family. For the Smyths, their faith provides security.

“We have to be a light in the community and not hide under the bushel,” Kip says. “We take chances when we do that, but if we’re doing what the Father wants he’ll guard us.”

The Smyths’ online efforts are getting them closer to a shared family goal – being together full-time. “Between all of our online businesses,” Kip says, “we make enough that I’ve been able to be home 4 days a week now instead of 3.”

In a follow-up to the viral video last fall, the Smyths shared how they felt about their new-found popularity.

Learn more about the Smyths via their website at https://1000sofroots.wordpress.com, or head right over to their YouTube channel via: https://tinyurl.com/1000roots

South of Ava, just a few miles away from the Smyth family, lives another homesteading family who run a YouTube channel.

Chris, Lorella, Lesleigh and Carter Crews are from Los Angeles. They ended up in Ava because of family.

“My parents had retired here,” says Lorella Crews. “and a few years ago my dad was diagnosed with dementia. My daughters were 12 and 14 at that time, and I wanted to bring them here so they could spend time with my dad while he could still remember them.”

The road trip from LA to Ava back to LA proved to be pivotal time for the Crews family.

“On the way home we stopped to visit my cousin,” Lorella explains, “and she was telling us about friends who had left the city and were ‘gentleman farming’. I asked what that meant and they defined it as earning enough income from their farm to provide for their family.”

As they continued home to California the wheels were turning in more ways than one.

“We had several thousand miles to talk,” Lorella says, “We started asking ourselves what could we do if we didn’t have this Southern California mortgage hanging over our heads?”

It wasn’t just a financial decision. “We wanted our children to have the satisfaction of raising animals and growing vegetables and fruit for food,” says Lorella. “We wanted them to have a different kind of respect for what they were eating.”

It took a while for the idea to fully sink in. And her Dad’s health kept declining. “In July of 2013 we finally decided to make a move,” says Lorella. “We looked at other places but ended up here because my parents were here, land is less expensive, and it’s easy to grow things in the summer.”

They ended up living right next to her parents. “We lived with my mom with the intention of buying property somewhere. Then she offered to let us build on her land,” Lorella says. “That worked out well when my dad was sick. We were right here to help.”

“I didn’t grow up farming at all. I was a city girl,” says Lorella. “I thought maybe we could document this journey on YouTube for friends and family to see what we are doing.”

On July 21st, 2013 the Crews launched their NotaFarmGirl channel. In the five years since then they’ve added over 500 videos documenting their transition to homesteading.

Their videos cover building a house, working with goats, cows, chickens, walnuts, quilt making, fencing,  calf branding, and every other aspect of their rural life. All created while the family schedule included parents working off-farm jobs and daughters either homeschooling or attending public school. 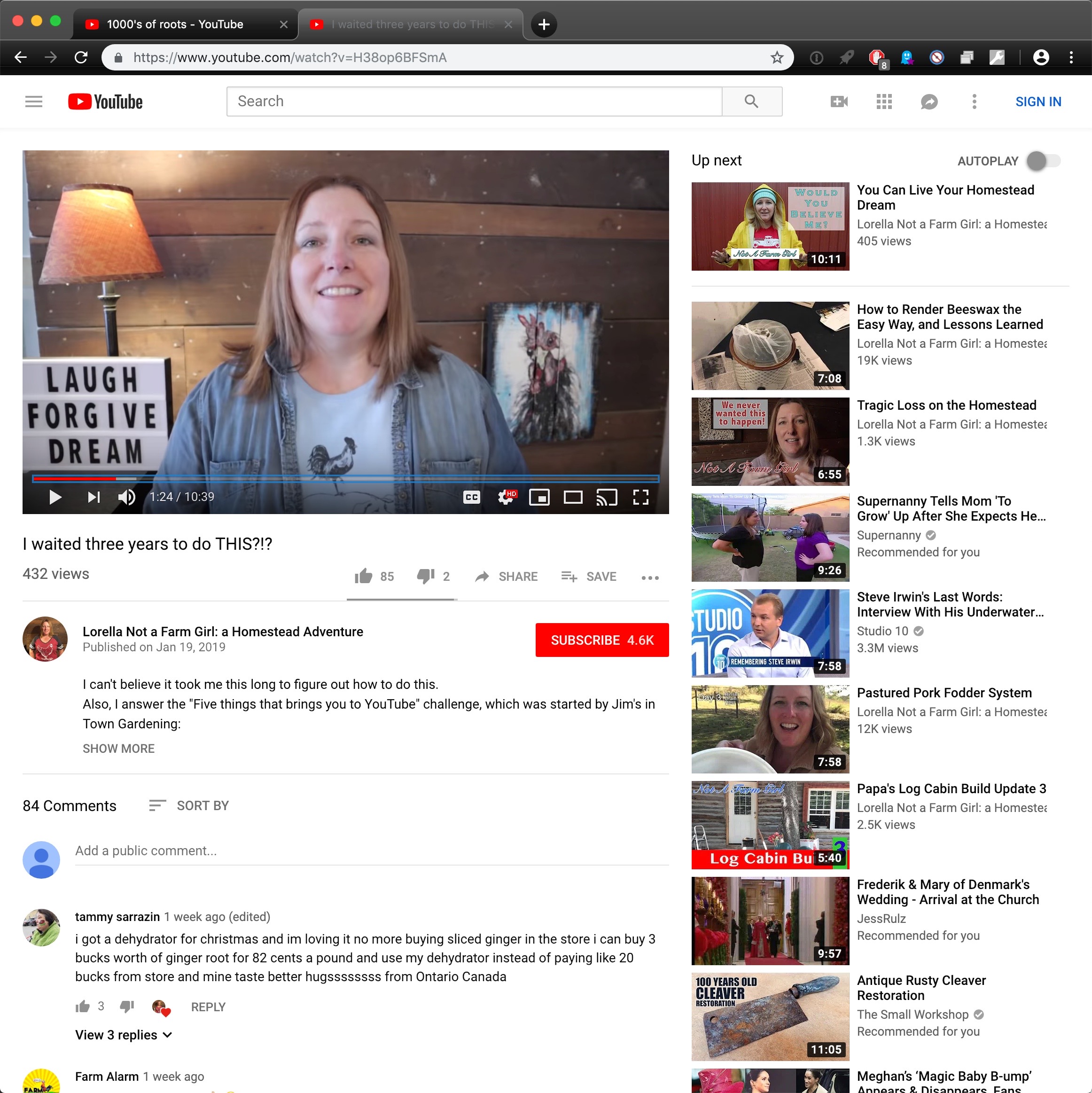 “Building a YouTube channel really does take a lot of work and time,” Lorella says. “Every project takes three times as long because you have to move the camera and do the same thing again, then you have the editing, scheduling and story writing that goes into each video.”

And while she hasn’t (yet) had the “hit video” that jump-started the Smyths channel, Lorella doesn’t see YouTube success as always being measured in dollars.

“I don’t know what I’m doing,” laughs Lorella. “YouTube lets me to learn from people who do know what they are doing. And I can ask questions on my own videos. We’ve been able to connect with other local YouTubers and build relationships with them.”

She’s had a good experience with YouTube comments overall. “I had one person who was posting nastiness about me, not about any of the content, so I blocked them,” Lorella says. “But most people are very supportive and helpful.”

Being a YouTuber, Lorella created a video entitled “Should I Quit YouTube?”. Her daughters overheard her editing it. “They both said what do you mean?”, recounts Lorella. “And my younger daughter said if you quit YouTubing, I’m moving back to California and you’ll have to give up this life. It was a package deal.”

Lorella didn’t quit. Her latest video was uploaded on January 26th and is entitled “How Will You Handle Winter Farm Chores?”. Visit her YouTube channel at https://tinyurl.com/NotaFarmGirl, or her website at http://planbeeorchard.farm.