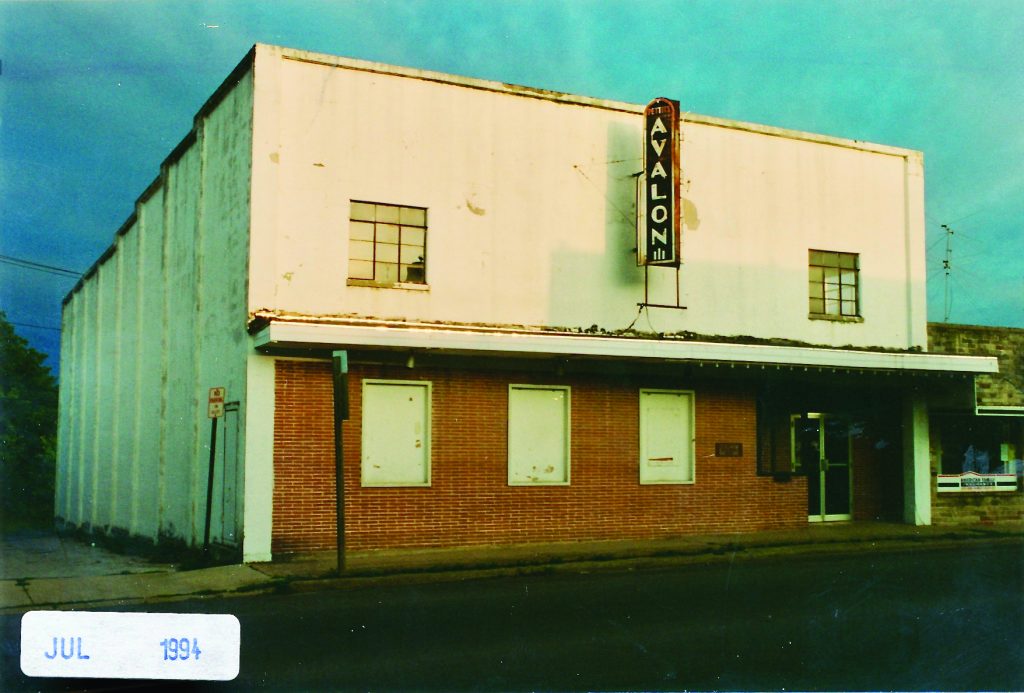 1994 photo of the then-closed Avalon Theater on South Jefferson Street in Ava, Missouri. 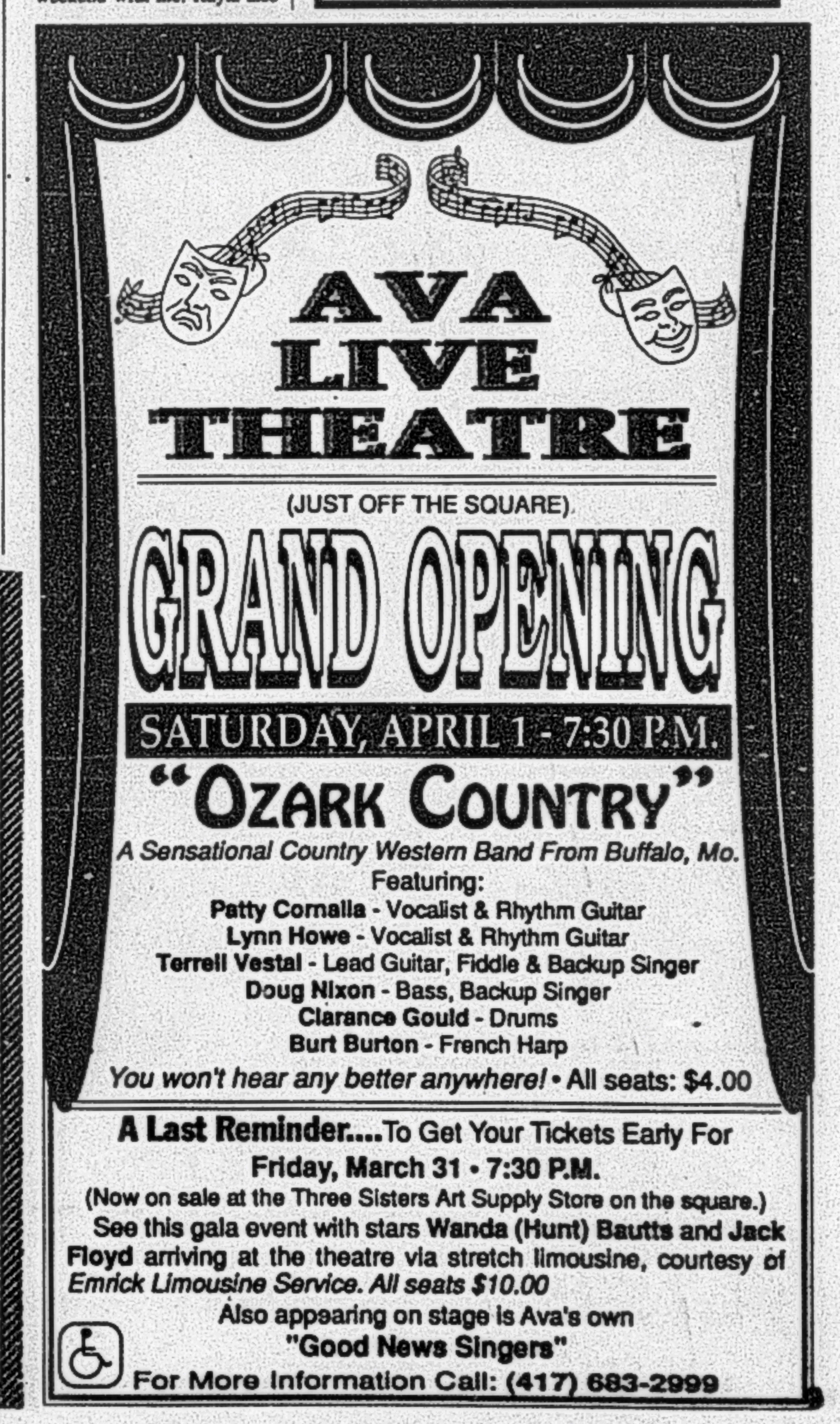 1995 ad for the Grand Opening of the Ava Live Theater. 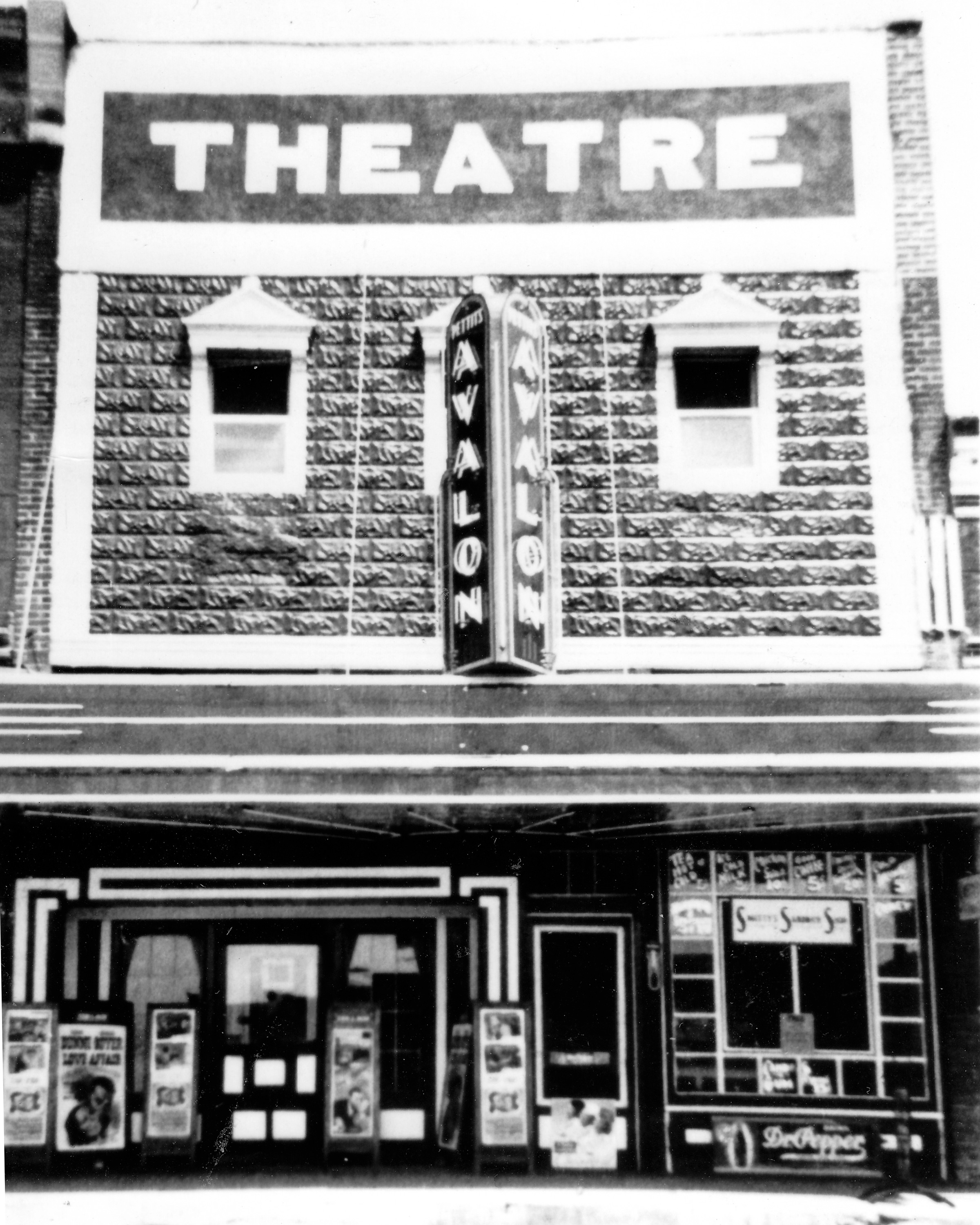 The original Avalon Theater on the east side of the Ava square.

The just-opened Ava TrueView Theater is but the latest in a long history of movie theaters in Ava. 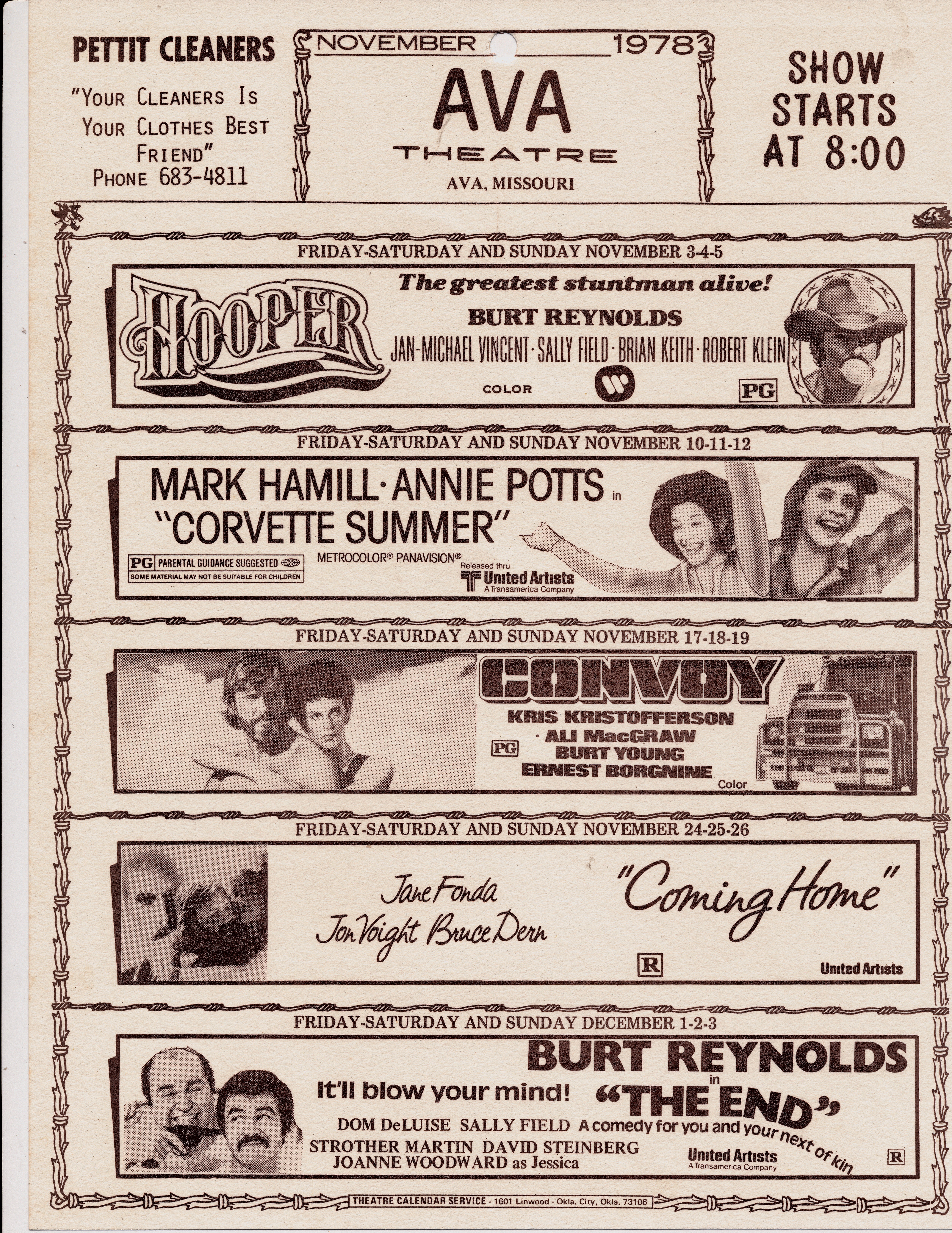 1978 advertisement for films at the “Ava Theater”.

One of the earliest was opened in approximately 1907 and was located on Route 14, just east of the square, past the County Defender’s office on the north side of the road (in the area of the closed Caseys).

The building was also used for roller skating and silent movies. It was quickly dubbed the “Red, White and Blue Devil” by local preachers because of it’s paint scheme and purpose.

Movies with sound prompted a change, so a theater was opened up on the east side of the Ava square (where the Walleys Flowers business currently is).

The “Devil” eventually became the Douglas County Milling Company, remaining in that location until the early 1970s.

Wilson owned the downtown building as well, but over time the Pettit family began running the movie theater business within it. The Pettits went on to also own the Star and Drive-in theaters in Ava, as well as theaters in nine other Missouri towns.

Here’s a rough timeline connecting the dots from there to today’s TrueBrew theater:

Plans for a new theater are announced by the Pettit Theater Organization.

The main reason for the new building was to be able to show Cinemascope wide-screen films which “simulate the third-dimension to the extent that objects and actors seem to be part of the audience.”

Plans to demolish the original Avalon Theater (on the square) are announced.

The property owners wanted to replace the two-story structure with a “modern office building.”

Grand Opening of the new Avalon Theater on South Jefferson Street is announced.

The “Avalon” neon marquis was moved from the downtown building to the new building.

The first feature film offered in the new theater is “The River of No Return” starring Robert Mitchum and Marilyn Monroe. Admission is 35 cents.

Film company representatives describe the Avalon as “one of the nicest small town theatres in the entire St. Louis trade territory.”

The first show was a sellout with an attendance of 360 people, and the theater quickly scheduled a second later showing to accommodate the overflow.

After a number of successful years in business, the theater history gets a bit unclear during this period.

However, a 1978 playbill shows feature films for the “Ava Theater” running in November.

The theater was closed permanently. 1994 building photo (above) shows some disrepair.

The theater building was purchased from the Pettits by Chuck and Lee Burrow.

The Burrow family began to refurbish the building with a goal of offering locals live music without having to drive to Branson.

“It will be for the entire family,” Chuck Burrow said, “young and old alike.”

Their plans were to extend the stage by removing some front-row seats, add dressing rooms to the basement, and build new restrooms for the public.

The Burrows reopened the theater as the “Ava Live Theater” with the “Ozark Country” band from Buffalo, Missouri booked.

In the advertisement for the grand opening, residents were encouraged to “See this gala event with stars Wanda (Hunt) Bautts and Jack Floyd arriving at the theatre via stretch limousine.”

All seats were $10.00. Ava’s own “Good News Singers” were also listed on the playbill.

The theater offered regular Thursday night live music that went on to be well received by locals. 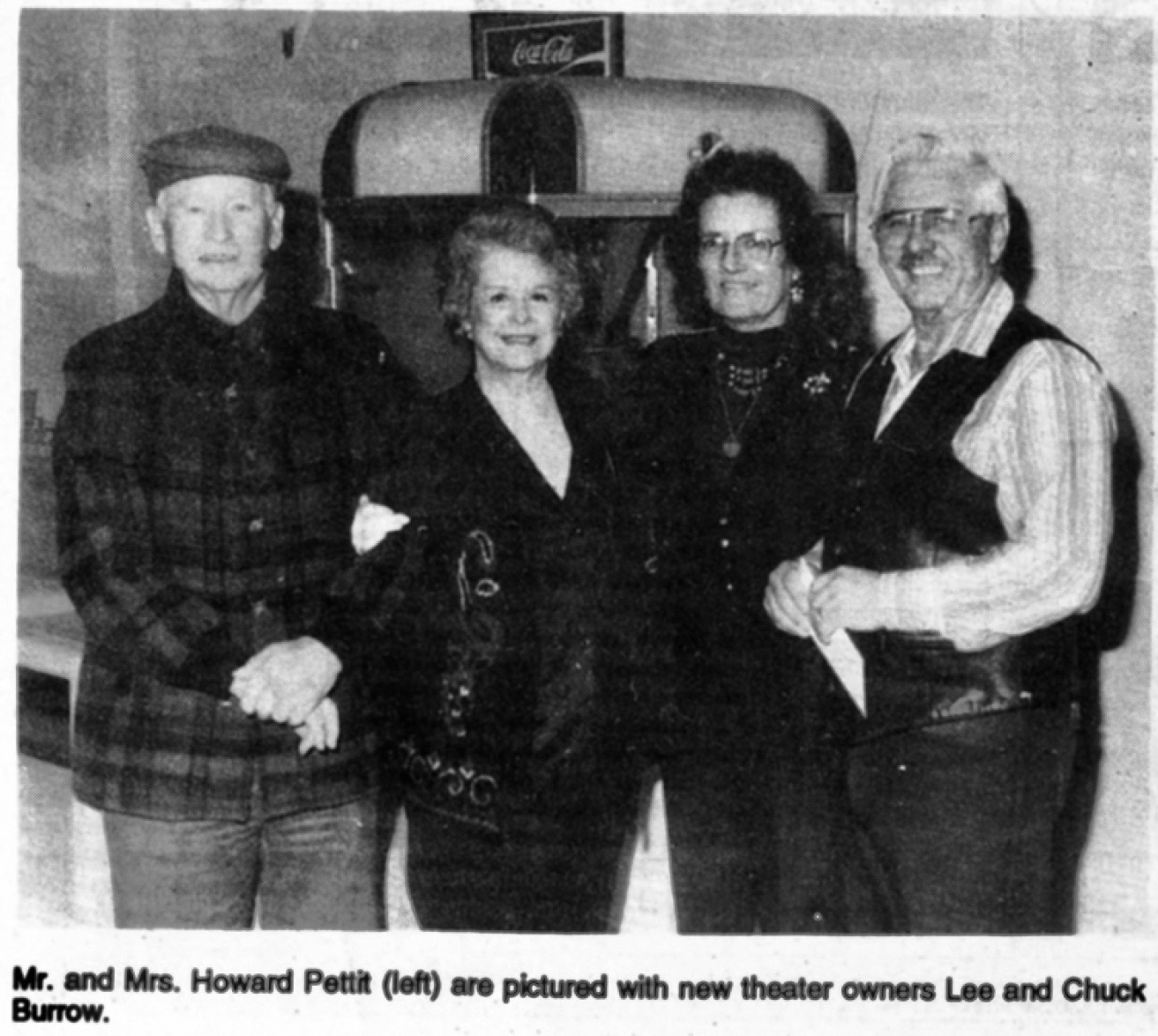 After some success as a live-music-only venue, during this time the Burrows changed the name of the theater to “The Ava Family Theater” and run a mix of both live music events and feature films.

The Burrows sell the theater building to Tim and Deirdra Carnall.

The Carnalls updated the theater with a new digital projector and new seating.

A photo from 2012 shows the theater apparently open, playing Men in Black 3 and Madagascar.

The theater ended up in foreclosure and was taken over by First Home Savings Bank of Mountain Grove, MO.

They reopened it as the “Avalon  Family Theater”.

The theater was sold to it’s current owners, Bread of Life Giving and Sharing ministry of Ava, Missouri.

This marks the first time the building has been owned and operated by a non-profit.

The theater is updated with curtains along the theater walls and insulation to both save on heating costs and improve viewer  comfort.

The theater reopens to a sellout crowd as the TrueView Family Theater.