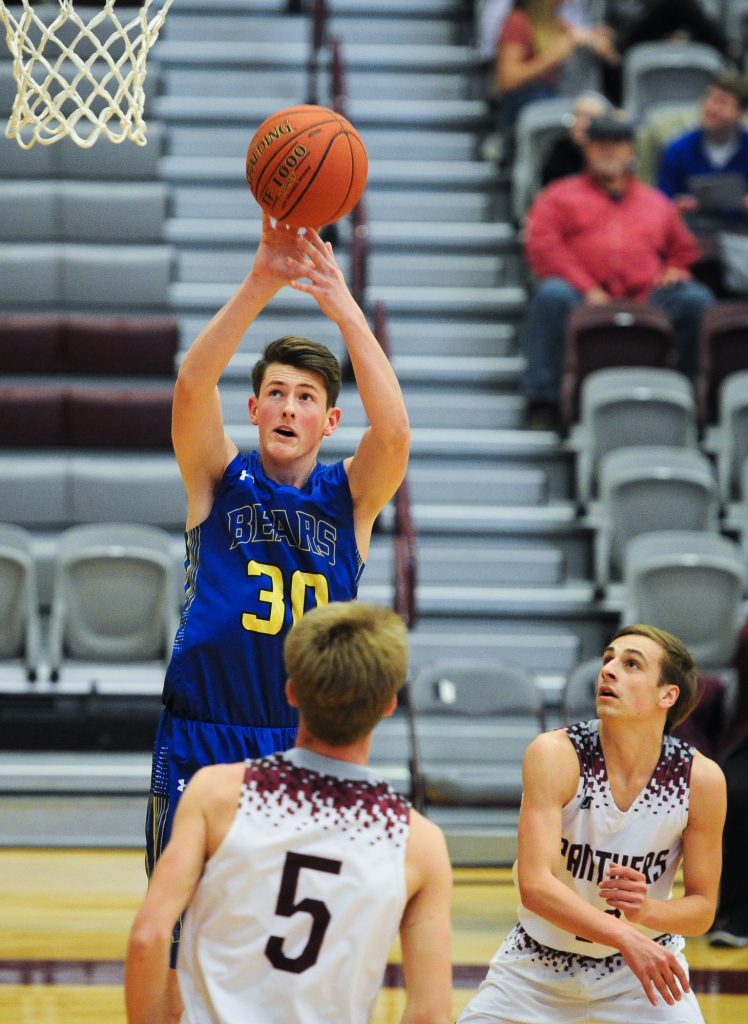 Ava High School's Drake King (30) reaches up for a shot at the basket during a game on the road against Mountain Grove on Saturday, Jan. 26. (Jason Hoekema/Douglas County Herald) 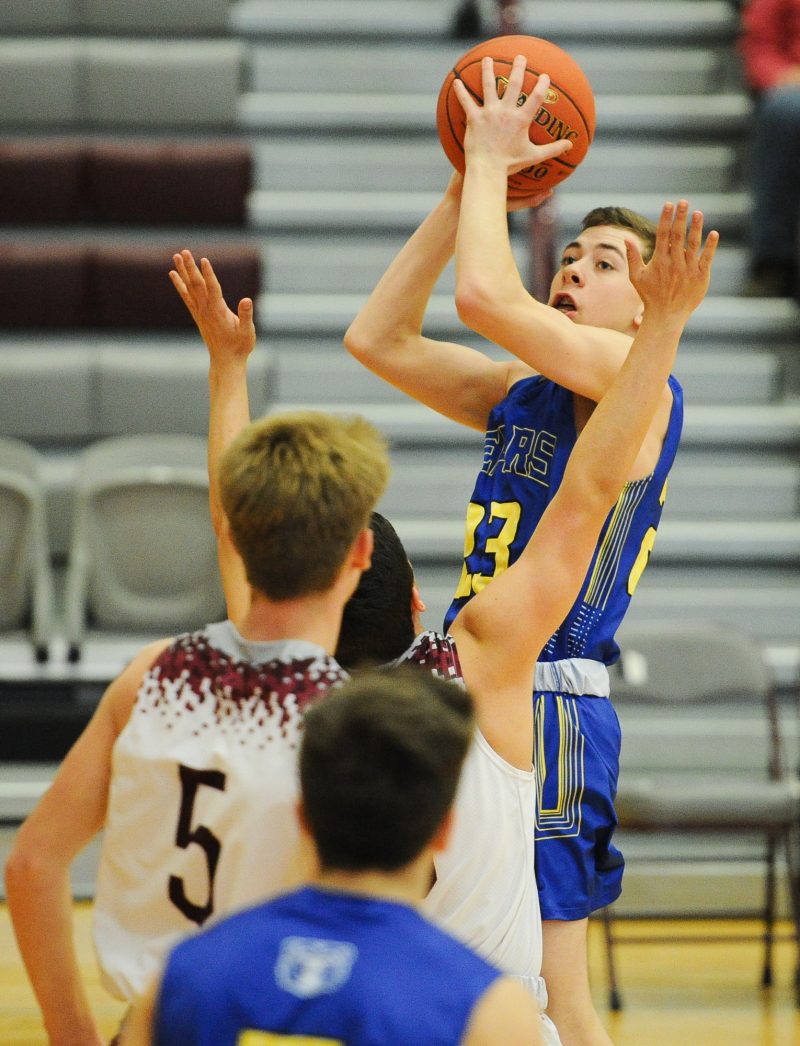 MOUNTAIN GROVE – Ava faced Mountain Grove for the second time as they played the Panthers at their tournament Saturday.

It was a close game with the Bears nipping at the heels of the Panthers in the first quarter where Ava matched Mountain Grove point-for-point to 17 at the buzzer.

Tom Emerich scored four, and Blayne Mendel came up with five plus two more from Nate Swofford and six from Andrew Dalton to get the Panther fans riled up.

Fouls kept creeping up on the Bears early in the second quarter, giving up the bonus with 7:49 left in the half as the Bears played aggressively and applied pressure to the Mountain Grove defense.

The Bears came up just six points short before the half after fouls turned up seven points on top of threes from Dawson Hiler and Noah McCallister, outscoring the Bears 18-12 before the break.

But the Bears didn’t give up the lead easily, either. Dalton an Emerich scored five points each plus two from Swofford to help deny the Panthers a run-away game.

“Our kids kept fighting,” said coach Mike Mallow. “I thought they played pretty good. We didn’t give up nearly as many layups or free throws as last time, (but) didn’t turn the ball over much.”

After the break, the Ava bench put in the work to match 21 points from Mountain Grove to maintain the six-point deficit. Blake King snatched-up an offensive rebound and put two in the bucket early in the third but wouldn’t score for the remainder of the game.

A big offensive surge from Blake King, who added six to the tally to respond to the Panthers’ Dylan Massey who shot 12 points in the third.

The pressure was put on Dalton who was well-covered after the half. He was still able to put-in six, four from shooting at the line thanks to Mountain Grove defensive mistakes.

The Bears were able to cool off in the locker room, allowing just four points on fouls on the shot by Mountain Grove’s Dylan Massey, who also came out and put up eight while the Bear defense was working on cooling other shooters like Bryce Lauderdale, Hiler, and Noah McCallister.

With the game close at 56-50 favoring the Panthers, the Bears out did themselves in fourth quarter offense, scoring 16 points to Mountain Groves 10 in regular play.

“I think we played pretty well,” said Mallow. “You know we had a stretch there. I think it was fifty-seven (to) sixty where we got three or four stops in a row and we didn’t score. Ultimately, we’d probably need to at least tie it, then get ahead.”

It was the whistle that would come for Ava to deliver the final seven points for the Panthers to close it up 73-67 at the buzzer.

The Bears held on for three quarters, matching point-for-point what Mountain Grove threw at the young crew from Douglas County.

These two teams are usually in heated competition as SCA rivals, but the future looks bright as the Panthers are looking at losing seven seniors this summer. Six of which make up the vast bulk of the Panther offense.

In summary, Blake King shot for eight points, Emerich with 13, Swofford with 11, Blayne Mendel with five, Kaden Bruce with three, Drake King made six, and Dalton with 21.

The Bears delivered 24 field goals to the Panthers’ 16, made five from beyond the arc to Grove’s seven, but fouls shots decided the game with 20 points for Mountain Grove with Ava making only six of those back.

“I thought they shot the ball very well the first half and at some point, you got to give them credit and not always blame yourself, said Mallow. “They shot the ball a little better, we didn’t get it done.”