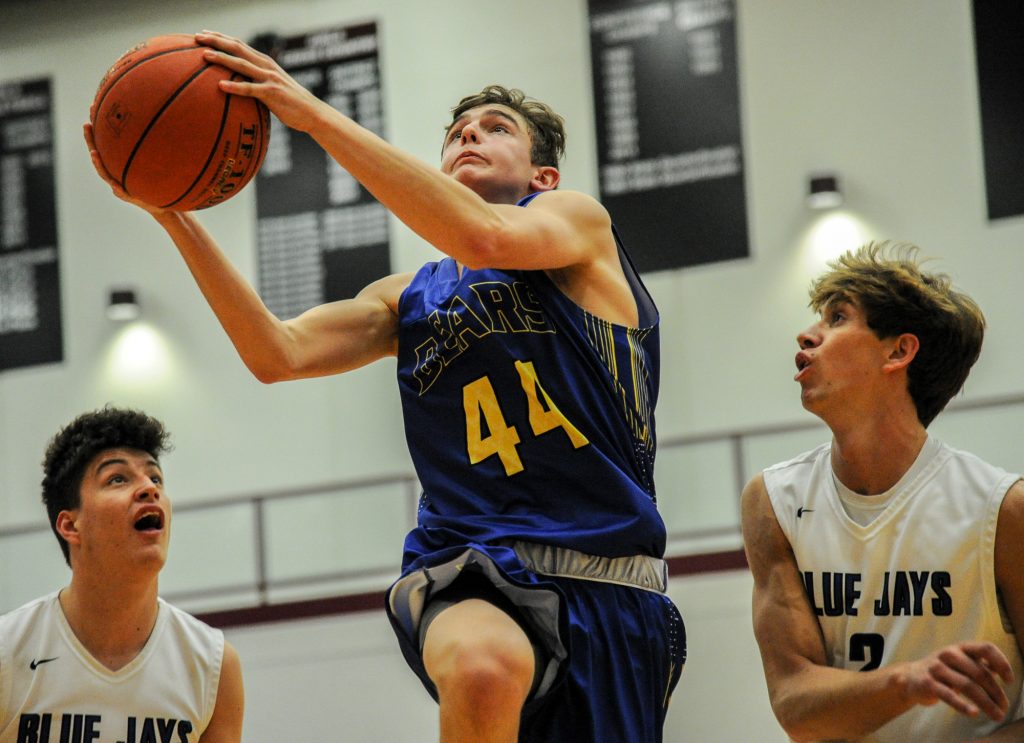 MOUNTAIN GROVE – The boys bench was on the road to compete in the Panther Classic Tournament, facing Hartville (13-4) on Monday, dropping the game 68-58.

Tuesday, without a day’s rest and several games in as many days under their belt, the boys’ bench rolled back up the blacktop to challenge Marshfield in the tournament.

Marshfield is a larger, Class 4 District 11, school and had the athleticism to challenge the Bears who had been worn from running a gauntlet of games.

“I knew they were very long and very athletic,” said Mallow.  “I thought we could turn them over, and we did. It takes a lot of effort to do that and a lot of energy.”

The Bears started off with a mis-step after Blake King gave up the first foul 12 seconds into the game followed by a stalled offense forcing Mallow to call a timeout at 21 seconds in.

The result of the huddle was Andrew Dalton opening the game with two points. 13 points later Tom Emerich would have the last say in the quarter with a shot for two more points at the buzzer.

The Bears were neck-and-neck with the board reading 16-15 for Marshfield. Trips to the line helped boost the Bears’ tally with eight extra points in the first half.

The second quarter would be a bit of a flip for both teams. Four minutes into the second period Blake King drew a foul for one extra point, taking the lead from the Blue Jays. About 90 seconds later Blake King would sink a three to make the game 28-26 for Ava.

The Blue Jays knotted it up again at 28 with two free throws from Austin Porter with 2:12 left in the half. The back-and-forth ensued with a carry ending the Jays’ offensive attempt then a charging foul against Dalton at 43.2 to cut off an Ava attack. With the Bears up 32-30, Marshfield’s Truett Gardner would score his first bucket to once again knot and lead the teams into the break.

After the pause Marshfield came out and started shooting. It wouldn’t be until after the three-minute buzzer that Ava would take the court to warm up.

Emerich opened the half with two, but the bucket was quickly answered by a shot and-one from Marshfield’s Letterman.

Kaden Bruce gave up his first foul on a blown call. Officials alleged that Bruce had committed a push, but he was on the inside with the ball.

With 5:45 left, Nate Swofford would shoot for three and draw the foul. His shot did not make it, but he did sink three free throws to make up for it.

Approximately one minute later, with Ava two points ahead, Dalton would give up his third foul to Drew Cromer who picked up two freebies. With Dalton on the bench to cool, the intensity of the Bears changed.

“We were ahead when Andrew got his third foul,” said Mallow.  “When he went out, we just quit attacking. Those guys know he’s a good player and (when) he went out I think it hurt our confidence a little, we made a few mistakes and it just snowballed.”

Shortly after Dalton’s temporary exit, Emerich found himself in a pickle, trapped in the left wing by two  Marshfield defenders. The whistle wasn’t blowing in the Bears’ favor, so Mallow used a timeout to maintain possession.

With 3:31 left in the period, Marshfield went on a short seven-point sprint to pull away from the Bears. Dalton would return to end the drought with two points, but the rally was already held for the Blue Jays who continued to open up the game in the fourth quarter.

Fouls came to haunt the Bears, Blake King and fouling out with 3:53 left on the clock. The Blue Jays were ahead by 20 with just under a minute left for the Bears to come up with some points. Emerich and Dalton would both draw fouls to close the gap to 77-61 at the buzzer.

Normally, Dalton would be aided with points from across the Ava bench. Tuesday night was an exception as a tall Marshfield defense had reach and speed to keep Ava shooters out of contention.

“We saw the same thing when we played Catholic,” said Mallow. “It’s different when there’s a 6’4”-6’5” guy closing on you. Their hands are a little higher, they get there a little faster. So, you’ve got to give them some credit for their defense.”

The Bears do get to take a few days off of the rotation before playing in the 5th place bracket on Saturday at 4 P.M. in Mountain Grove. Coach Mallow says tired legs leads to less-than-desired shooting and hopes for better outcomes in coming games.

“We seem like we lost a step as we went through the game,” said Mallow. I can’t make excuses, you just got to try to figure out a way to get it done.”