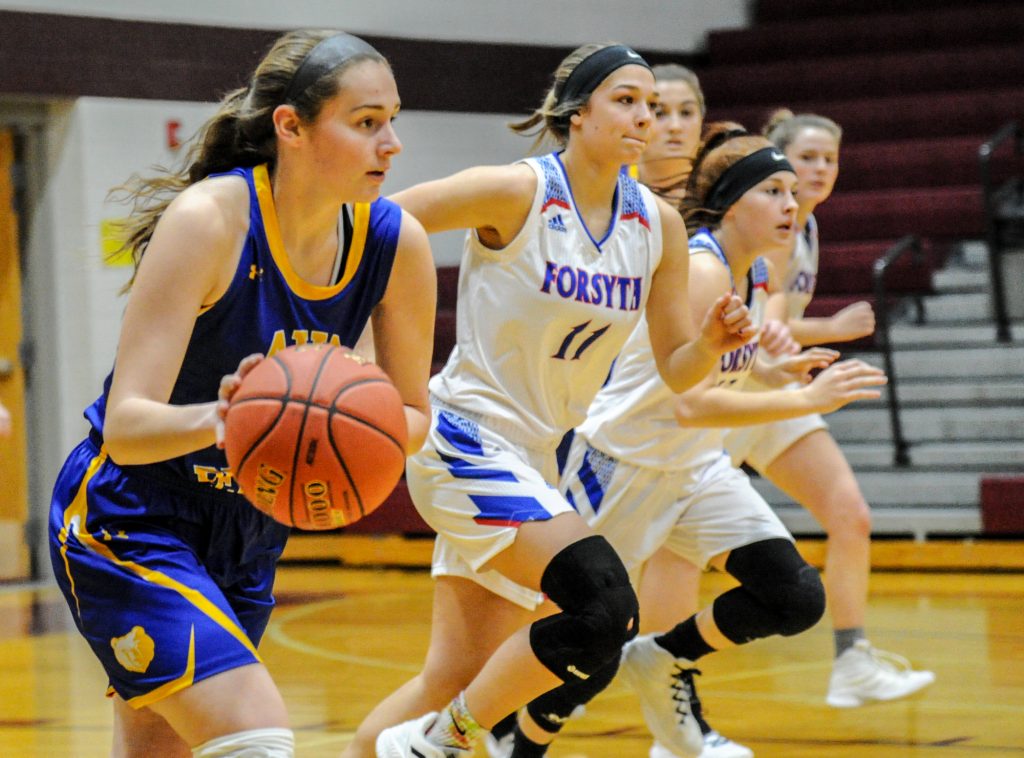 Their first game? Seeded against Forsyth.

This was the second meeting of the two schools with similar records and a history (at least this year) of having a close game.

On Dec. 20th, Ava traveled down to play the Lady Panthers at their home court. That night spelled-out a five-point loss for Ava, trailing 50-45 at the final buzzer.

One month and one day later, it would happen again.

The first half made things seem like the tables had turned on Forsyth with Ava leading by six at the half.

As most things do, they change.

The Lady Bears brought-in 13 points in the first quarter with seven put in by Ashton Bewley.

Bewley recently made a career-high 28 points against Koshkonong in the Cabool Tournament, earning her the MVP title. Monday, despite the loss, she still delivered.

Aided by twos from Emily Stillings and Lauren Mendel – who threw in two freebies – the quarter was ended on a high note as Bewley hit a three.

At 13-6 after one, things looked good for the Lady Bears. Forsyth had been limited to just two field goals by Landry Stewart and Kaylee Henning. The other two points from the line.

The second quarter suddenly went quiet. Bewley would open it with a layup for two, aided by a momentum change with Claire Fossett denying Forsyth a bucket with a steal from Calley Matthews.

With 5:07 left in the half, Lauren Mendel would get her third foul call giving a trip to the line for Trinity Sullinger, who would give Ava a break with two misses.

The quiet was finally ended with a two-pointer from Bewley, ending the quarter behind Forsyth, 7-6.

At the half Bewley had shot for eleven points, Stillings for two, Hanna Evans with two, and Lauren Mendel with four.

Missed opportunities hammered the Ava bench in the first half with the team shooting only 25-percent from the line, missing out on six potential points.

On the other side, Forsyth needed to use players carefully. Two of them were in toruble at three fouls each in the first half. Both Scarlett Texeira and Calley Matthews would foul-out in the fourth quarter.

Following the break, the tables turned against the Lady Bears and they turned hard.

Ava was stunned and outscored 20-3 in the third quarter, putting the Lady Panthers up by 11 in a crucial fourth quarter of play.

The Lady Panthers started the second half with possession and Calley Matthews would be charged her fourth foul just 24 seconds into the quarter.

Fosset toed the line and shot twice, making just one point on the trip to the charity stripe. After that, Forsyth went on a 16-point run with twos raining-in from Texeira and Emily Shipman for 12 points.

To make matters worse for Ava, Hanna Sullinger seemingly came out of nowhere and dropped two bombs on the Lady Bears with the second capping-off 16 unanswered points. Sullinger had not scored in the first half.

The Lady Bears kept themselves out of foul trouble, sending two Lady Panthers to the line for just two points. But the damage had been done.

Trying to make some magic happen in the fourth quarter, a now-stressed Ava bench started giving fouls with Fossett gaining her fourth 30 seconds into it.

Another 30 seconds later an overthrown cross-court pass cut some slack for the Lady Bears as they started to inch back within grasp of the lead.

Bewley would have a big fourth quarter making 10 of her 21 game-total points. Twos from Emaly Keyes and Lauren Mendel plus two free throws from Hanna Evans would win the Lady Bears the fourth quarter, but not the game.

Forsyth’s Shipman kept at it but was held to just two. As the game neared its end Emalea Cook would sink a bucket and get the extra point for the Lady Panters as Bewley and the team tried to sink a three with shots from Hanna Evans following a time out call by Houk.

“We got a good shot, it just didn’t go in,” said Houk.  “We were able to get our press set up and they were scrambling for the ball and we needed the possession. So, I called time out and then we got our press going because we were behind and needed to push the issue. It got us plenty of turnovers off of it and gave ourselves some extra possessions, but just didn’t put them in the basket when we needed to.”

Hanna Evans would hit the steel, but it would not go in. With 12.2 seconds left in the game, the teams would get tangled up on the court to force the jump ball call.

The arrow went to Forsyth who brought the ball in and despite the Lady Bears’ efforts to make a steal and sink the three, the buzzer would call it for the Lady Panthers at 41-38.

“I felt like the girls battled back and came back in the fourth to give us a chance,” said Houk. “You can’t let a team outscore you that much in a quarter and get down by eleven going into the fourth.”